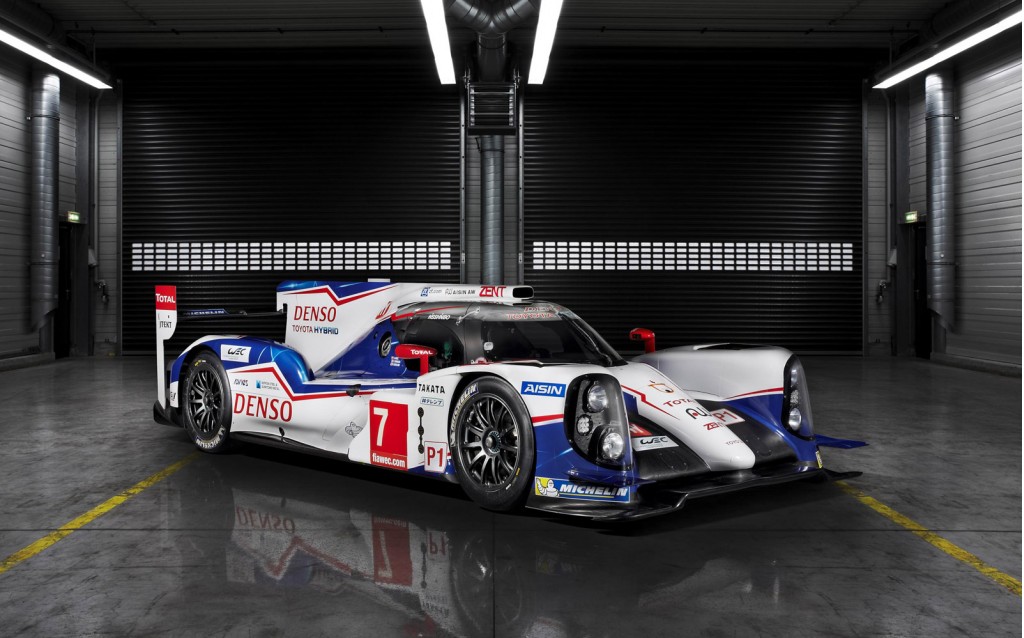 TOYOTA Racing has today revealed the TS040 HYBRID car and revised driver line-up which will take it into the 2014 FIA World Endurance Championship – and into a new era of hybrid motorsport.

With 480PS of four-wheel-drive hybrid boost in addition to the 520PS 3.7litre petrol engine, the TS040 HYBRID, launched today at Paul Ricard, has a maximum power of 1000PS and represents the most advanced hybrid technology in racing.

The move to a four-wheel drive hybrid sees TOYOTA return to a concept which has been part of its racing hybrid development since 2007, when the four-wheel drive Supra HV-R became the first hybrid to win an endurance race, the Tokachi 24 Hours.

The new TOYOTA HYBRID System – Racing powertrain has been developed specifically for the revised WEC technical regulations, which put a particular focus on fuel economy. A 25% reduction in fuel usage compared to 2013 is required, with savings achieved through powertrain, aerodynamics and driving style efficiencies.

A fuel flow metre will monitor fuel usage and penalties will be applied in the race if the three-lap average consumption exceeds defined limits. The fuel allowance is determined by the level of hybrid capacity each team commits to; TOYOTA Racing has opted for 6MJ of hybrid capacity per lap of Le Mans.

Working together with official partner TOTAL, TOYOTA Racing’s engineers have found further efficiencies and performance through the use of specialist TOTAL lubricants.

The new, more open regulations have allowed TOYOTA Racing to implement a major increase in hybrid power, with an AISIN AW motor-generator on the front axle added to complement the DENSO unit on the rear.

Under deceleration, the motor-generators apply braking force in combination with traditional mechanical brakes to harvest energy, which is transferred via inverter (AISIN AW at the front, DENSO at the rear) to the NISSHINBO super-capacitor. During acceleration, the motor/generator reverses its function, acting as a motor to deliver a 480PS power boost.

That four-wheel-drive hybrid power is allied to a normally-aspirated V8 engine, both having been developed by Motor Sports Unit Development Division at the Higashifuji technical centre, where next-generation TOYOTA road car technology is born.

Know-how from the TS030 HYBRID is already in use to enhance TOYOTA’s road car hybrids and the WEC’s focus on road-relevant technology is expected to see further technology transfer from track to road. TOYOTA has already sold more than 6million hybrid road cars since the launch of the Prius in 1997.

The TS040 HYBRID chassis is designed, developed, manufactured, built and operated by TOYOTA Motorsport GmbH (TMG) in Cologne. It represents a major evolution on the TS030 HYBRID and embraces regulation changes which see maximum width reduced by 10cm and a series of safety items introduced.

Particular attention has been paid to airflow around the car, both to reduce drag in order to improve fuel economy and to increase downforce, and therefore grip, levels to compensate for tyres which are 5cm narrower compared to 2013.

Extensive development in TMG’s state-of-the-art wind tunnels has resulted in an aerodynamically-efficient design which is also incredibly lightweight thanks to advanced composite design and production processes.

Such cutting-edge techniques are significantly more efficient than track testing, allowing TMG engineers to continue optimising all aspects of the TS040 HYBRID chassis and lay-out for longer than rivals relying on traditional methods.

A slight reshuffle of the driver line-up sees Alex Wurz, Stéphane Sarrazin and Kazuki Nakajima share the #7 car while Anthony Davidson, Nicolas Lapierre and Sébastien Buemi are in the #8.

The TS040 HYBRID made its track debut at Paul Ricard on 21 January and has subsequently completed 12 days of testing across Europe, covering around 18,000km.

After the two-day Prologue test at Paul Ricard, which begins tomorrow, the team plans one further session prior to the Six Hours of Silverstone when it will race manufacturer competitors Audi and Porsche for the first time this year.

Yoshiaki Kinoshita, Team President: “We are very much looking forward to our third season in the FIA World Endurance Championship when we will fight to achieve our dream of winning Le Mans and the World Championship. As well as challenging new regulations which make endurance racing the most road-relevant discipline in top-level motorsport, we also have a new competitor. We are looking forward to competing with Porsche, as well as our more familiar rivals Audi. As a team we learnt a lot in our first two seasons in WEC and all this know-how has gone into our new TS040 HYBRID, which is the most technologically-advanced TOYOTA ever to compete on the track. We consider it very important that our racing programme contributes to TOYOTA’s wider activities and I am very proud that data, knowledge and technology pass regularly from our racing programme to our R&D colleagues, who are working to make great road cars of the future.”

Hisatake Murata, General Manager, Motor Sports Unit Development Division: “The TOYOTA HYBRID System – Racing has been significantly upgraded due to the challenge of new regulations. The regulations require a big reduction in fuel consumption but, to remain competitive, we of course want to retain engine power; it is not a realistic option to reduce consumption by reducing power. We looked at various possibilities but the most appropriate solution for us was to increase the displacement of the engine to improve heat efficiency whilst upgrading the hybrid system. We considered bigger hybrid capacity but settled on 6MJ as anything greater, using kinetic energy recovery, had a negative effect on lap time due to increased weight. To recover that amount of energy under braking, the rear motor-generator was not enough so we returned to the four-wheel hybrid concept we developed from 2007 to 2011, before the regulations limited hybrid boost to just one axle. With 1000PS we have achieved very impressive performance and kept the system within our weight targets. Now it’s time to see what it can do against the competition.”

Pascal Vasselon, Technical Director: “We started the initial studies and simulations immediately when the ACO announced the first elements of the regulations in mid-2012 and last season we devoted a lot of our available resources to developing the TS040 HYBRID. In terms of the aerodynamics and chassis concept, the TS040 HYBRID is a deep evolution of the TS030 HYBRID, taking into account the new dimensions as set by the regulations and implementing the lessons we learned in the last two years of WEC competition. New regulations always create a challenge and the obvious challenges for 2014 have been to change so many things at the same time, with significant regulation changes in terms of chassis and powertrain. The main challenge has been to create a more complex car with more hybrid hardware to achieve higher hybrid power and at the same time reduce significantly the weight due to a 45kg reduction in minimum weight. That has been a real headache but using lightweight materials and efficient design optimisation processes, we have achieved our targets.”