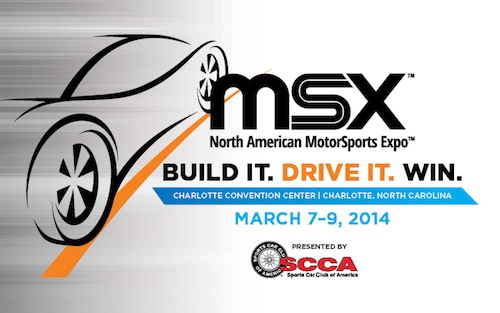 k directly to their team.  With over 30 different seminars where you could learn some top notch motorsports education from some very renowned racing legends from all varieties of of motorsports disciplines.  MSX is geared toward armature racers who currently compete in or are looking to compete in road racing, autocross, hill climb, time trials, rally, rallycross and karting.  The goal of MSX is to give all disciplines of racers an area to congregate together, to educate themselves, network with companies and other racers and develop familiarity with products that can help them win.

Some people wonder why it MSX isn’t located centrally in the United States, I honestly wondered the same thing.  After discussing this with a few people it became clear why it is located in Charlotte, North Carolina.  Honestly, it truthfully makes sense.  Charlotee has the highest concentration of motorsports enthusiasts in the country.

The hallways are all empty because everyone is in the rooms absorbing information.  With topics such as shocks, chassis, drive train, aerodynamics, safety, data acquisition and many more.  With some really great speakers such as Tom Long, Roger Caddell, Randy Popst , Andy Hollis and many more.

Down on the exhibitor floor there were several race cars on display that were nice to get up close to.  Ranging from autocross cars, LeMons/Chump cars all the way up to a Daytona Prototype.  There was also an example of a new MX5 Cup Car.  It has been relieved that Long Road Racing will be developing the next generation of the MX5 Cup cars.

Speaking of Mazda.  They had an iRacing Simulator in their exhibit.  Where Tom Long and Liam Dwyer were giving tips to those who were willing to get behind the simulator wheels.  Very popular exhibit.

If you were looking for some Data products Race Keeper was there to discuss any questions, provide examples of data traces and vidoes for you.

If you were looking for hardware instead of software, Wilwood had a very impressive booth showing off their brakes!

GoPro Motorplex partnered with MSX for a “Put up or Shut up Challenge”.  It was free to sign up over at GoPro Motorplex’s booth.  I unfortunately was not able to attend, I recently had a surgery that made me not eligible to run.  They gave everyone a time slot between 9 and noon the Sunday after the Expo.  Everyone got one eight minute session that they were able to look for their fastest lap.  Winner (Johnathan Stewart) takes home a years worth of bragging rights, $500 and the fabulous trophy pictured below.  Second Place (Michael Melvin) received $100 and third place (Jacob Donald) received $50.   Something everyone who attended though received the fun of slipping and sliding around in a kart for 8 minutes and all they had to do was sign up and drive out to the GoPro Motorplex.

Next year instead of reading about it, you should look into attending, building up your motorsports network and educating yourself from some top notch motorsports legends!