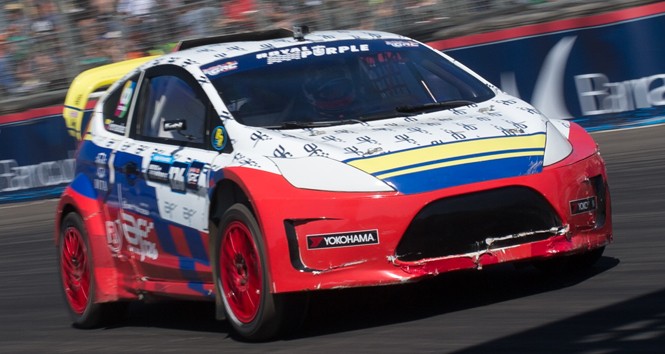 2014 Results: Fernandez’s GRC Lites debut at X Games Austin didn’t quite go as planned, as the sport’s first Colombian driver failed to make the six-car final. But his results consistently improved as the season went on, culminating in three podium finishes in Daytona, Los Angeles (II), and Seattle and a third place finish overall.

What’s New in 2015: The AF Racing squad expands to a two-car team with the addition of teammate Nur Ali, but for Fernandez himself, the only real change is a new livery. He’ll be looking to build upon last season’s foundations for the 2015 season.

Strengths: Experience. Last year, the sophomore drivers in the Lites class dominated early on, with Olsbergs MSE teammates Mitchell DeJong and Kevin Eriksson firmly establishing the championship as a two-horse race. Whether or not the tracks themselves stay the same isn’t as important as a year’s worth of experience with car control and multi-surface racing.

What To Watch For: OMSE remains the benchmark that all teams are measured against, and for good reason: they built and developed the Lites car. But AF Racing has set itself up to become the David to OMSE’s Goliath. Two cars means more data to work with to make both drivers faster, and Fernandez can reap the rewards of that as the more experienced driver. That’s going to be crucial, as OMSE has reloaded with Austin Cindric and Oliver Eriksson intent on capturing this year’s title.

Outlook: The last guy who finished third in the Lites championship went on to win the next season’s title. That’s a good omen for Fernandez as he looks to improve upon last year’s finish and take his first race win.