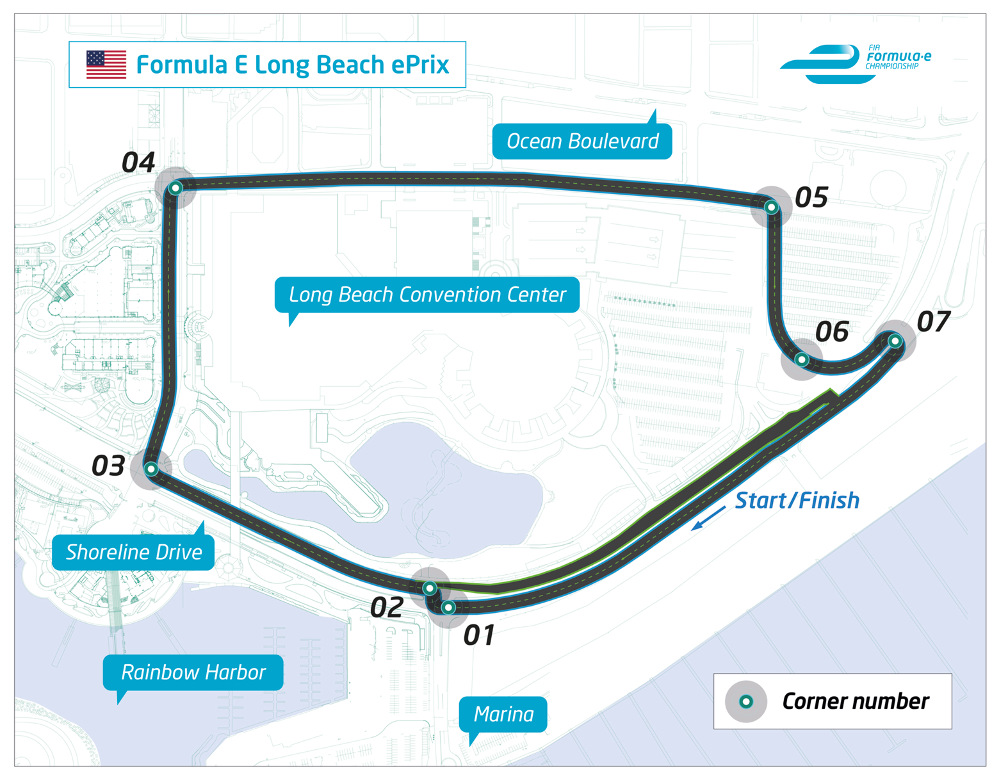 The FIA Formula E Championship, the world’s first fully-electric racing series, today announced that round seven of its inaugural season will be held on the iconic streets of Long Beach, California, USA.

The Long Beach ePrix, as it will be titled, will take place on April 4 2015 and will form one of 10 races – and one of two in the US alongside Miami – taking place in city-centres across the globe. Organisers also confirmed that the Long Beach race will be one of two that forms part of the championship’s Legacy Programme giving free access to fans with a focus on attracting school and university students from the nearby area to appeal to a new generation of motorsport fans and promote the electric vehicle industry.

Formula E is the FIA’s (Fédération Internationale de l’Automobile) new open-wheel championship using fully-electric race cars capable of speeds in excess of 150mph. Its 10 teams have already been confirmed and feature some of the leading names in motorsport including two from the US – Michael Andretti’s Andretti Autosport and Jay Penske’s Dragon Racing. A total of 20 drivers will take part, two per team, four of which have already been announced including former F1 stars Lucas di Grassi (Audi Sport Abt Formula E Team) and Jaime Alguersuari (Virgin Racing Formula E Team).

The announcement was made during a press conference held at the Terrace Theatre Plaza – which overlooks part of the circuit – hosted by Long Beach Mayor Bob Foster, who pledges his full support to the new initiative, the CEO of Formula E Alejandro Agag and driver Lucas di Grassi.

“Long Beach is proud to be among the elite group of international cities hosting the FIA Formula E Championship,” said Mayor Bob Foster, who is a long-time electric vehicle owner and recognised expert on energy issues. He added: “The Long Beach ePrix will bring a new generation of race fans to the iconic streets of Long Beach.”

Long Beach was selected to host one of the 10 international races by championship promoters Formula E Holdings due to its commitment to sustainable mobility and long-running success hosting large scale sporting events and high-visibility special events. California is the number one market for plug-in electric vehicle (PEV) sales with around 12% of national sales alone occurring in the South California area.

Alejandro Agag, Formula E CEO, said: “We are very thankful to Mayor Bob Foster and all the city authorities for their warm reception here today and for welcoming the new all-electric FIA Formula E Championship to Long Beach as hosts of round seven. They all share our passion for not only motorsport but for promoting sustainable mobility, and I have every confidence that the people of Long Beach and Southern California are going to experience a revolutionary, and of course very exciting, new racing event come April 2015. The goal of Formula E is to showcase the true potential of electric vehicles and to inspire people to believe in these cars for their own personal use.”

The Long Beach street circuit is the longest running in the US beginning in 1975 and hosted Formula One from 1976 to 1983 before staging annual CART, Champ Car and IndyCar races. During the press conference, the exact track layout was also revealed which will see the Formula E cars use a modified configuration to the regular IndyCar circuit. At 1.6 miles (2.1km) in length and featuring seven turns, the Formula E cars will use the same iconic start/finish line adjacent to the Marina before heading off in a clockwise direction past the Rainbow Lagoon. They will then turn right onto South Pine Avenue before re-joining with the more familiar track configuration. The cars will then pass around the grounds of the Convention Centre before a final right-hand hairpin brings them back across the start/finish line.

Speaking about the track during the event driver Lucas di Grasi said: “Long Beach is one of the most iconic city tracks in the world. This is the perfect place for Formula E to showcase innovation and sustainability.”

Gil de Ferran, former IndyCar legend and Formula E ambassador, added: “Long Beach is an iconic track. It is the most famous street circuit in North America and is a little bit of a tradition in American motorsport. It says a lot for Formula E that it is racing at such a venue.”

The first Formula E race takes place around Beijing’s Olympic ‘Bird’s Nest’ Stadium on September 13 2014. All Formula E events take place in just one day – practice, qualifying and a one-hour race – in order to help minimise disruption to the city.