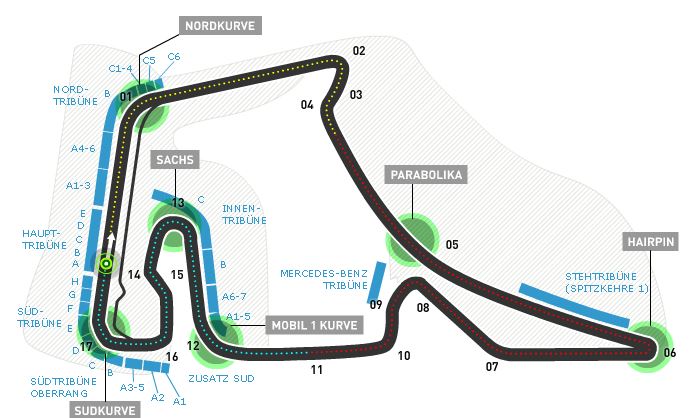 The original Hockenheim circuit was built in 1939 as a high-speed test track for Mercedes-Benz, who needed a venue to test for the Tripoli Grand Prix. It was almost eight kilometres long and was formed of two long, curved straights with a long corner at either end.

When war broke out the construction was halted and in the post-war years the Nurburgring became the venue for Formula One racing in Germany, with Hockenheim hosting a few smaller events. When a plan to build an autobahn through the circuit was approved, the government supplied Hockenheim with a large sum by way of compensation. This money was used to build a new track, the now famous Hockenheim circuit, which cut through the forest before looping into the wonderful stadium section around which large grandstands were erected.

In 1968 Hockenheim hit the headlines when Jim Clark was killed there in an F2 race. Nevertheless, with the Nurburgring quickly becoming outdated, Formula One racing came to the track in 1970. Once the Nurburgring had been modernised, however, the sport returned there, leaving Hockenheim with national and F2 events.

But after Niki Lauda suffered horrific burns at the Nurburgring in 1976, Hockenheim became the home of the German Grand Prix. It too, however, was not without dangers. In 1980 Patrick Depailler was killed in testing at the track, and a chicane was put in to break up the fast Ostkurve, while in a 1982 crash Ferrari’s Didier Pironi suffered terrible injuries to his legs.

In 2002 the long runs through the forest were done away with and the layout of the track was heavily modified. Despite arguments that it had lost some of its character, the first race at the new circuit was deemed a great success and the venue has remained a regular feature on the F1 calendar ever since.

And with the success in recent years of local heroes Michael Schumacher and Sebastian Vettel, the German Grand Prix at Hockenheim has become one of the most atmospheric races of the season, with the noise from fans in the stadium section being almost deafening at times.