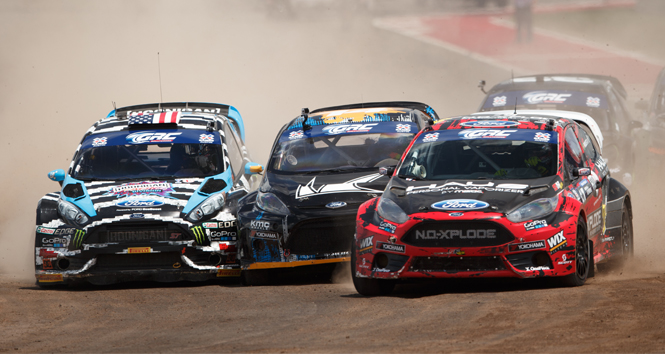 The inaugural Volkswagen Rallycross DC, the third event of the 2014 Red Bull Global Rallycross season, may feature a brand new venue in RFK Stadium, but longtime fans of the series will recognize a familiar setup. The 10-turn, parking lot-based track evokes memories of an enthralling and competitive season finale for the series in Las Vegas last year, and drivers are excited to race on the new layout.

“It has been a while since I last raced on a counter-clockwise track, so I think DC should be fun!” said Nelson Piquet Jr., coming off of his first Red Bull GRC podium finish at X Games Austin. “I’m anticipating a lot of action in Washington. The track seems wider, with room for overtaking in the first two corners. I also like the balance in tarmac and dirt sections, a combination that should provide lots of fun for the drivers and a great show for the fans.”

The track, characterized by long, wide straightaways and multiple hairpins, features a split of roughly 75% pavement and 25% dirt. Extra room in turns three and nine will allow multiple lines through the corners, while the series’ signature jump splits turns six and seven. The joker lane undercuts turn 10 and should allow for thrilling last-corner passes in a charge to the finish.

“This should be the best track Global Rallycross has seen so far,” added Patrik Sandell, one of only four drivers to make both main events this year. “I’m stoked!”