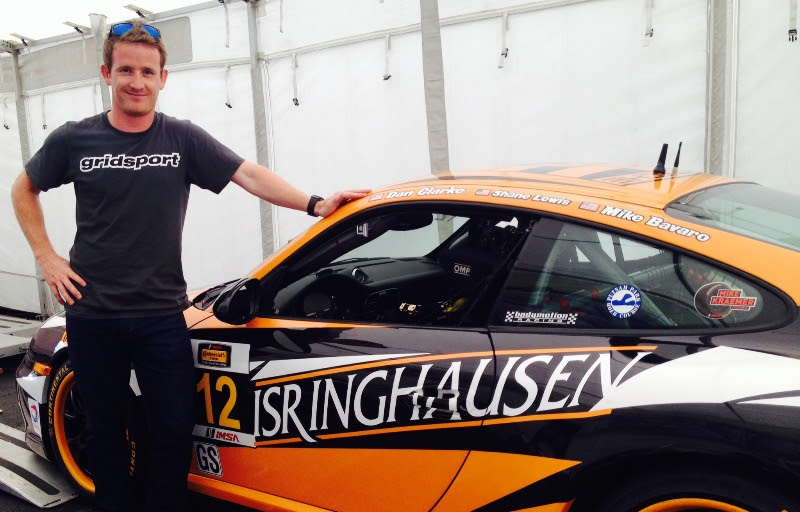 Dan Clarke is awesome. He’s an open wheel racer from England that came to the US to pursue a career in Champ Car and later switched to sports cars. Back in the day he even won the prestigious Formula Ford Festival World Championship event. The man can drive. And this weekend he races in the Body Motion 911 with an Ispringhausen Imports livery. Who is Ispringhausen? When my friends wanted a rare Porsche or a hard to find M3, they called Ispringhausen in Springfield, IL. Apparently they sell Mercedes too. They always lived up to their word and now they are working with Dan Clarke and Body Motion Racing to field a 911 in this weekend’s Brickyard Sportscar Challenge.

Bodymotion Racing built the car and is an experienced professional motorsport outfit, led by Mike Bavaro, with successes in Porsches from Grand-Am racing to Porsche Club America and Club racing. Their regular 2014 driver and Sportscar legend, Shane Lewis, will partner Clarke for this Friday’s nearly three hour race.

The No.12 Bodymotion Isringhausen GS Porsche began life as a 2012 911 GTS road car and was transformed into the Continental Tire Sportscar Challenge GS class race car by Bodymotion Racing. With power in excess of 400hp and a top speed of over 180mph, the team is looking forward to this Friday’s event.

If you see Dan at the race go say hello. He’s the real deal and a great guy. And he’s fast. The best of both worlds.

Geoff Isringhausen had this to say: “Isringhausen Imports is excited about partnering with Bodymotion for the Continental Tire race at Indianapolis Motor Speedway this weekend. Bodymotion knows how to build and prepare an excellent race car and combined with our outstanding driver lineup of Dan and Shane Lewis in the Porsche 911 we are very confident of a strong finishing position.”

Dan wanted to share his gratitutde and excitement for the weekend: “This opportunity couldnt come at a better time for me. I’ve wanted to do the Indy Sportscar event for some time and I couldn’t be more excited about this upcoming race. I know the Bodymotion guys from the Porsche Cayman racing success I had with the Isringhausen Motorsports team, and I’m super grateful from the support of Geoff and Mike for this. I also want to thank everybody else who has helped me to be part of this deal and get back in a professional series. And this car! I can’t wait to get behind the wheel and work with Shane Lewis, who has a ton of experience in this format, and see what we can do together this week on track.”

Other notable sponsors of the car are Geartie – Reusable Rubber Ties and PDInstore – Where game-changing logistical speed & agility reigns.

Born and raised in a small town in Yorkshire, England, Dan followed his passion from Kart Racing at 8 years old with his working family backing, to racing the fastest race cars in the World in America. Not content with playing soccer at a young age, Dan’s passion quickly became motor racing and with young dreams of one day becoming a professional race car driver, he never looked back. Thanks to the support of his hard working family, Dan was able to race Go-karts up to the age of 16 and progress into the British Racing Driver’s Club race car school. He quickly dominated that race series and attracted a successful Music and Entertainment promoter to become his manager. Now with full-time backing and support, Dan progressed through British Formula Ford and Formula 3 becoming a frequent race winner and winning the prestigious Formula Ford Festival World Championship event.

America became the next target and Dan was hired to race in the Champ Car World Series. He immediately fought with the front runners in his rookie season and soon earned the nickname “Speedy Dan” that stuck with him since. Following on from that, Dan represented Great Britain in the A1GP World Series. Then upon returning to the US in 2010, he completed a full season in the Firestone Indy Lights series scoring podiums for the famed Indycar team, Walker Racing. In 2011, Dan started to look towards NASCAR racing for his opportunity to get back in a car and a full-time ride. In August he competed in the NASCAR Nationwide Series at Watkins Glen and impressed many by qualifying and making the race in his first time ever piloting a Stock car.

Dan is an active driver coach and is splitting his time between his work with drivers and his current 2012 program with Isringhausen Motorsport in the Intercontinental Trophy Cup Series.

Isringhausen Motorsports is the racing division of the Isrighausen Imports Group. Based in Springfield, Illinois, Isringhausen has become synonymous with quality vehicles and superb service. The Isringhausen-Way of doing business has been one of offering excellent products at fair prices coupled with service that goes above and beyond what anyone would expect from a typical car dealership. Isringhausen Imports has been voted one of Porsche’s Top 25 dealers in North America and is also a multi-time winner of BMW and Mercedes Benz top awards, BMW Center of Excellence and Mercedes Benz Best of the Best.

“We believe that good service is comprised of two components, a willing and helpful attitude accompanied by competency in your field”, states Geoff Isringhausen. “We try to support an environment where each person who works here strives to serve each customer as they wish to be served, with dignity and respect.”