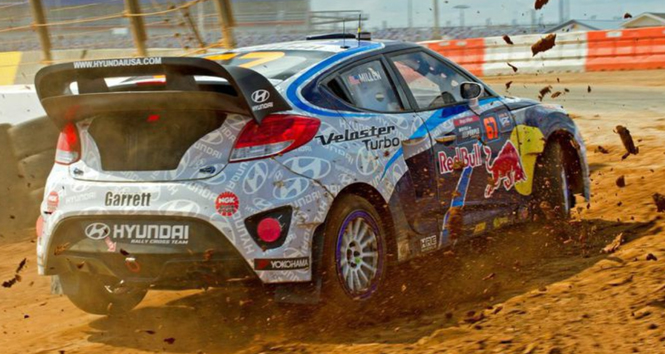 Hyundai/Rhys Millen Racing drivers Rhys Millen and Emma Gilmour went through a difficult weekend at Red Bull Global Rallycross Charlotte, the fifth round of the 2014 Red Bull GRC season. In a hotly contested battle, Hyundai/RMR-prepared Hyundai Veloster Turbos challenged for the main event thanks to development work performed after last weekend’s race in New York. An impressive last-lap move by Millen in the last chance qualifier left him just under a second short of the final. 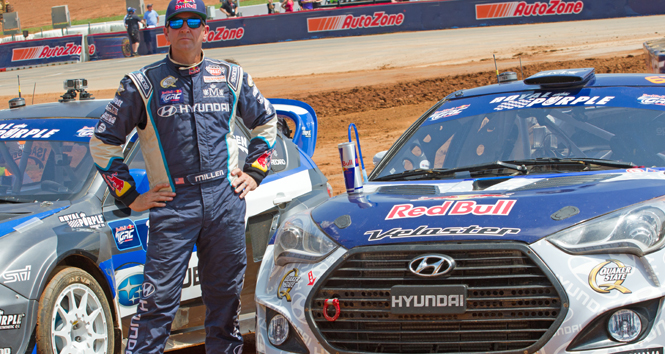 “I would say that over the last three years of competition the car is the easiest it has ever been to drive,” said Millen, driver of the #67 Red Bull Hyundai Veloster Turbo. “We did some more development on differentials, primarily front differential, to kill some of the understeer we had in New York, and then in preparation for that being severe understeer on the dirt. We really nailed the setup—the car was perfect on pavement turning off and going over the jump entering back into the stadium.”

The weekend started strong for Hyundai/RMR, as Millen earned a season-best fifth place in seeding and Gilmour out-qualified both defending GRC Lites champion Joni Wiman and two-time 2014 winner Scott Speed. Both team members eventually ended up in Semifinal 1A, where Gilmour finished sixth and Millen retired with a rear suspension issue.

In the last chance qualifier, both drivers asserted themselves early with a chance to transfer, only to fall prey to trailing drivers using their joker laps. Millen chased down Bucky Lasek and created an opportunity to pass coming off of the final corner, but backed off of a wide outside line in order to preserve the vehicle.

“A lot of this comes down to luck,” continued Millen. “We had two good heat races yesterday, but the first transfer heat race this morning it broke the left upright off the start, and at that point, in four laps, starting off the back on a dirt course, it was a tough battle. I pushed Bucky (Lasek) as much as I could in every corner and tried to pass on the last corner but couldn’t make it stick. I didn’t make it to the final, but the result of the weekend was not representative of the speed of the car. Every one of these drivers can win, and every one of these drivers can have a bad day.”

Meanwhile, Gilmour actively challenged for a spot in the main event for the second race in a row, following an impressive performance in New York. Thanks to additional seat time in the vehicle, her confidence in the #27 Hyundai Veloster Turbo grows every weekend. 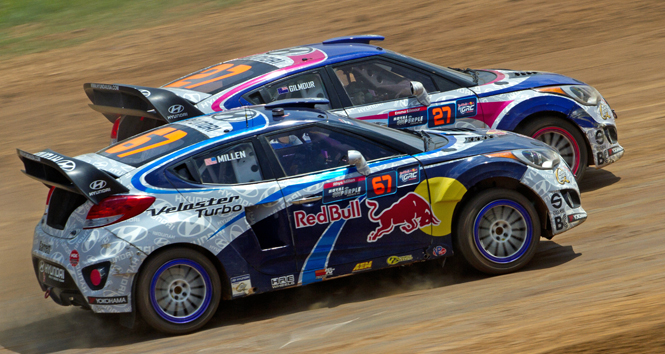 “The biggest difference has been getting some mileage in the car and just getting to set the car up as I like it,” said Gilmour. “I’ve been spending some time with my engineer, just making it work for me. That’s been the biggest change, really. From there, you’re a bit closer to the pace when you get race experience as well.”

In GRC Lites, Tyler Benson drove the #60 Tyler Benson Racing/Brad Benson Hyundai GRC Lites to a fifth place finish, equaling his career best result. Benson finished second in both of his heat races and has now climbed to sixth in points, with third in the championship only 20 points away.

Millen now ranks 12th in Red Bull GRC points, within 20 points of the top 10, with a heat win at X Games Austin to his credit. Gilmour ranks 13th in her first season as a rallycross driver and has begun to challenge for main event placements week after week.

Hyundai/Rhys Millen Racing will return to competition on August 22-23 at Daytona International Speedway for the sixth round of the 2014 Red Bull GRC season. Tickets and information can be found athttp://www.redbullglobalrallycross.com/DIS.