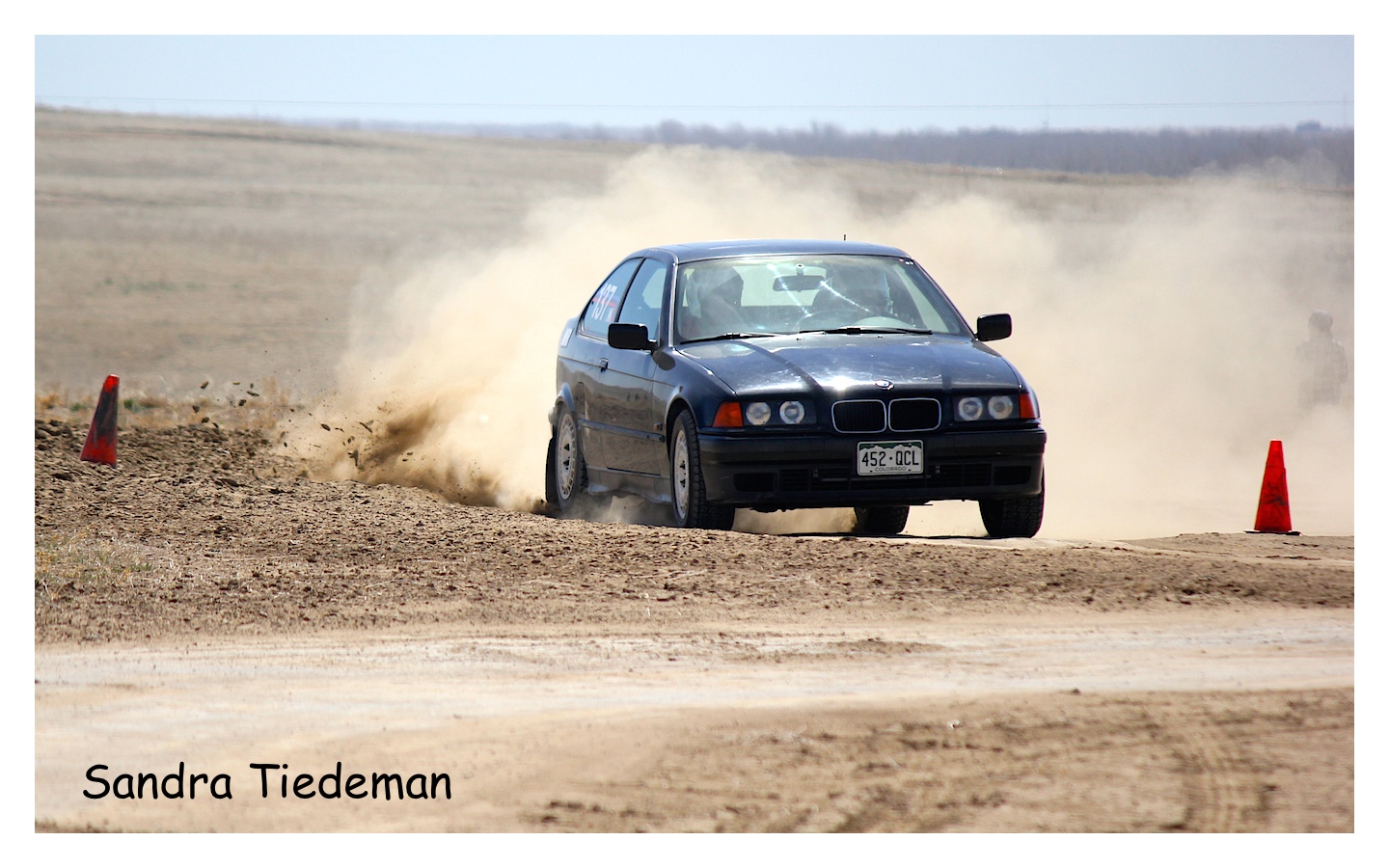 It seems like a long time ago, but it really was only a few years ago. It was 4 AM, I was up to my elbows in Kevlar and Resin as we made a full underbelly protector for Dave Kern’s BMW 318ti Rally build. 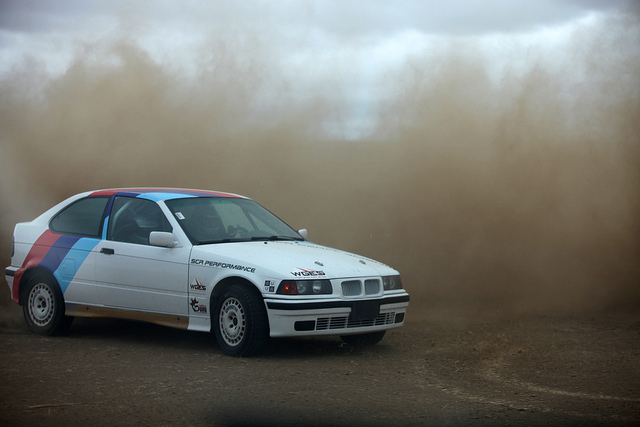 I got hooked soon after I drove it for the first time and when I decided to build my own race car it was naturally the same chassis, since I had developed some familiarity with the car. The 318ti offers a few unique features too, it is pretty light and it has an e36 front end with e30 rear suspension, diff and more. Dave’s car is very high spec, he researches and documents… The beauty of building the same car was that development was done and I could take my limited resources and put them directly into the chassis, parts and pieces that work.

I bought my 1995 318ti from a recent graduate from a high school in eastern Colorado. He was pretty concerned with stereo’s and colorful lights, but not very concerned with things like Oil or Anti Freeze. So I got a pretty decent deal on a car with a blown M42 motor. I thought I might be able to salvage it at first actually, the thought was maybe to do a head gasket on the car but once I popped the head off, it was apparent that the head was cracked. It is tough to justify putting a ton of money and time into rebuilding the little M42 when there are a lot of options out there, so I decided to look around at all the options to see what I could make of this thing. It was time to start digging into Dave’s development notes. 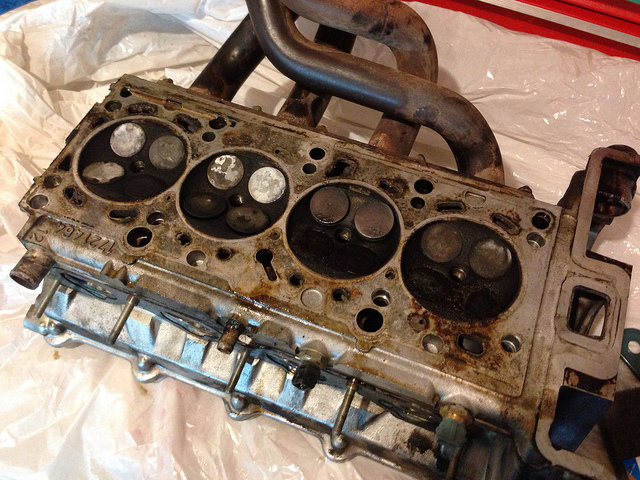 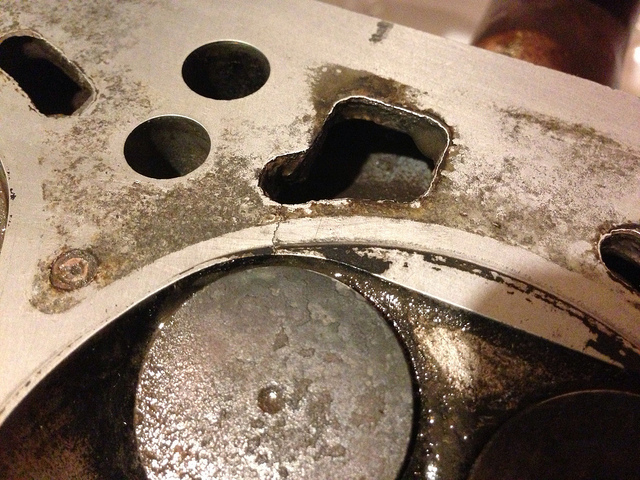 I started digging around for an S50 motor. it seemed like the smartest choice. I mean, who doesn’t want an S14, it is lighter, faster, it must be able to jump over tall buildings and probably has a star on Hollywood Blvd… but I can’t afford all that so the S50 was a more attainable goal. I put feelers out, scoured the forums, scoured craigslist, ebay, etc… One of the feelers went out to Bill Caswell. I had briefly met him at Pikes Peak a few years back and he was “the BMW guy” so certainly he would have some info. Bill put me in touch with a salvage yard called AutoBahn and it turned out i was in luck. the best price I had found yet on an S50 with a 5spd tranny, drive shaft, DME and more. It all showed up neatly packed on a pallet and I was ready to start this project. 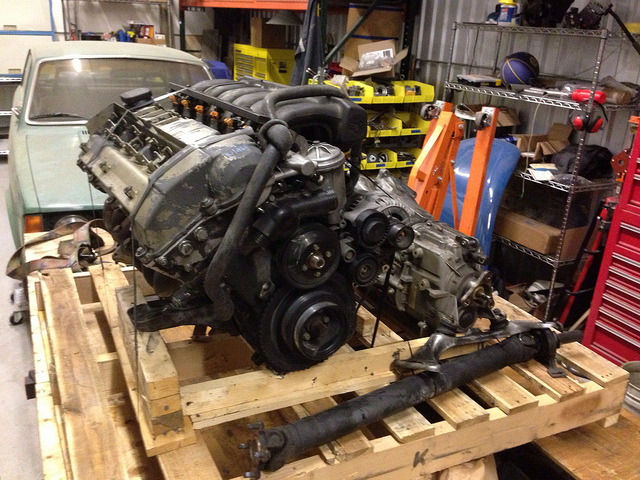 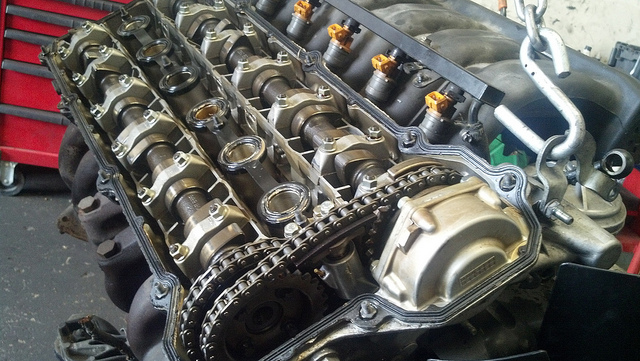 One thing to note, I have never been an “engine guy.” In the past I have certainly been able to fabricate things out of metal, composites, plastics and more, but I’ve typically left the engine work to the professionals. This was my opportunity to educate myself on how to work on engines, diagnose, install, wire and more. I always find that I am only able to learn effectively if I am thrown to the wolves, so here I was, throwing myself to the wolves. During the process of installing the new setup I spent countless hours reading. Not only the Bentley bible, but forums, Pelican Parts tutorials and more. Often I would read a handful of conflicting writeups only to get under the car and have to figure it out on my own. I freshened up a few things, including a few gaskets, I replaced the prone-to-crack plastic thermostat housing with a metal one. The aluminum tranny mount was replaced with steel and any bushing that looked suspect was replaced with Polyurethane from AKG. I replaced the plastic impeller water pump with a cast metal one and more. I even replaced those pesky heater hoses with new hoses so I didn’t run into the same problem I have seen on a bunch of other swaps. 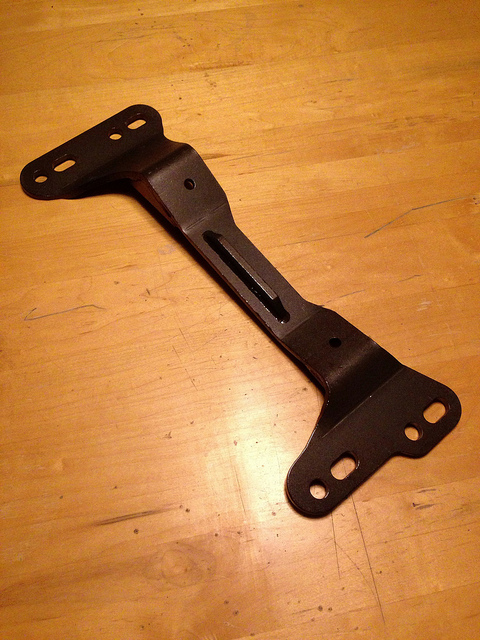 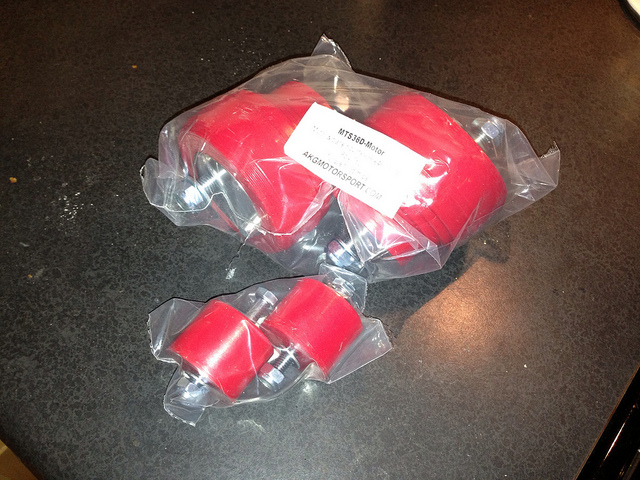 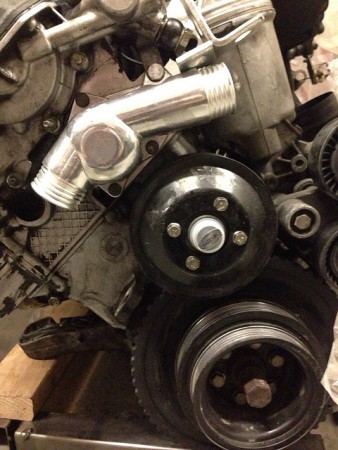 The day came and I fired up the motor for the first time. It was nearly glorious… but the engine had an uncontrolled pulsing rev. I couldn’t figure it out. Idle control valve, vacuum leak, crank position sensor and all other things that seemed to be obvious solutions were quickly ruled out and I moved on to wiring harness and other possibilities. Finally a friend stopped by with fresh eyes and after he exhausted what seemed to be all of his ideas a small movement caught his eye. The harmonic balancer! This seems so far fetched, but the rubber was just deteriorated enough that the CPS was not picking up all the teeth. 6 bolts and 15 minutes later and the car was alive and well. Of course another 15 minutes after that and the used stock radiator I had cracked and gave up the ghost. I quick call to Mishimoto and I was back in action.

At this point I had lost a bit of momentum which I quickly gained back. I started working on some different elements of the car like suspension and chassis reinforcement and took it out to Rally.Build (http://rally.build/) who has developed a really nice rally skid plate for e36 BMW’s. I then called up Flowmaster and ordered up a Cat and muffler then had a custom exhaust made at a local muffler shop. Its a nice unit, sounds good and is all V-Band which is very convenient. Once it was ready it was off to a Rallyx race with Colorado Rallycross (http://www.coloradorallycross.org/). 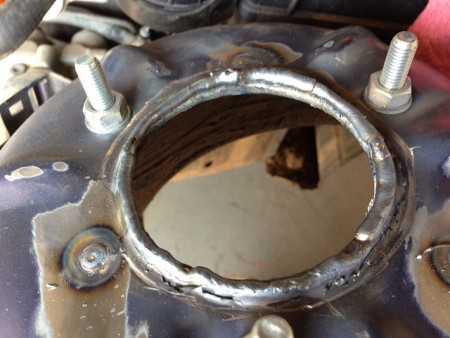 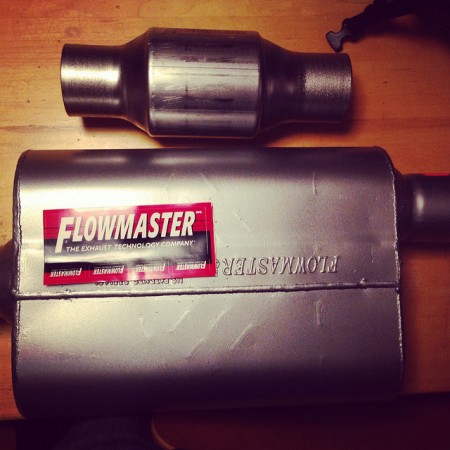 The car was pretty good, but maybe not quite there yet and I had to put it on ice for the rest of the season after all the 1970 VW bug that I have been working on with my team Project Baja (http://projectbaja.com/) was nearly complete and we needed to get some testing in before the Baja 1000. 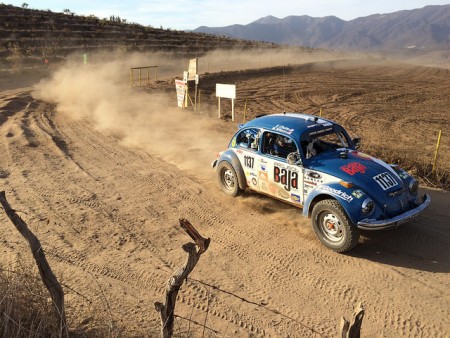 After Baja I finalized a few more things on the little BMW, I added a Limited slip, new axles and picked up some gravel tires from Rocky Mountain Autosports (http://www.rockymtnautosports.com/). Some testing showed that the little car was pretty squirrely and when I was driving home on the highway I figured out why. The rear trailing arm bushings and subframe bushings were worn out. the rear end of the car would pivot when you gave it power! Last month I pulled the subframe out and replaced all these bushings with AKG motorsports bushings, nothing too stiff, but wow the difference is amazing. 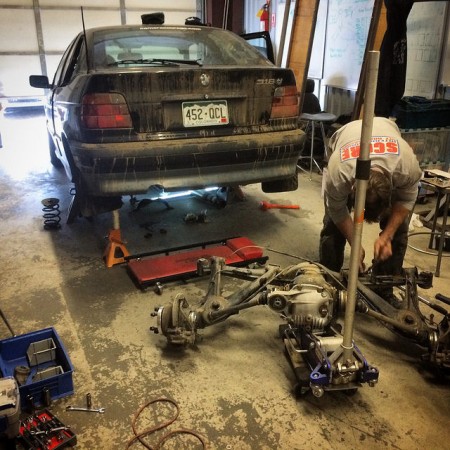 This past weekend I took the car out to the season opener of the Colorado Rallycross series. It was a record day with 84 cars out there. My class, Mod 2, had 20 drivers! The little car performed perfectly, very predictable and very fun. I wasn’t the fastest or slowest, but I am out there have fun so hanging the tail out puts a smile on my face. 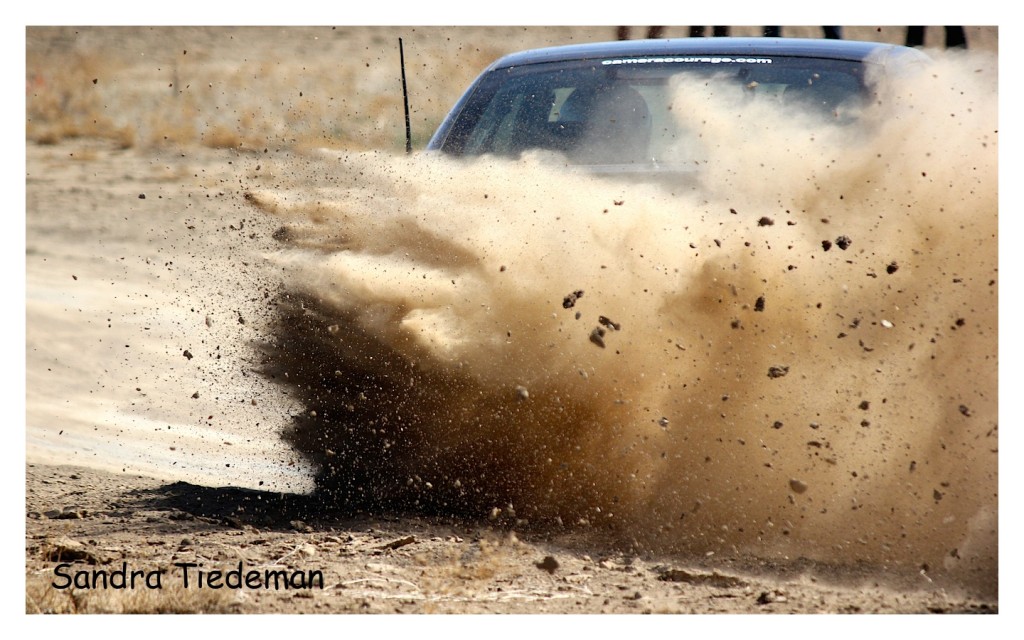 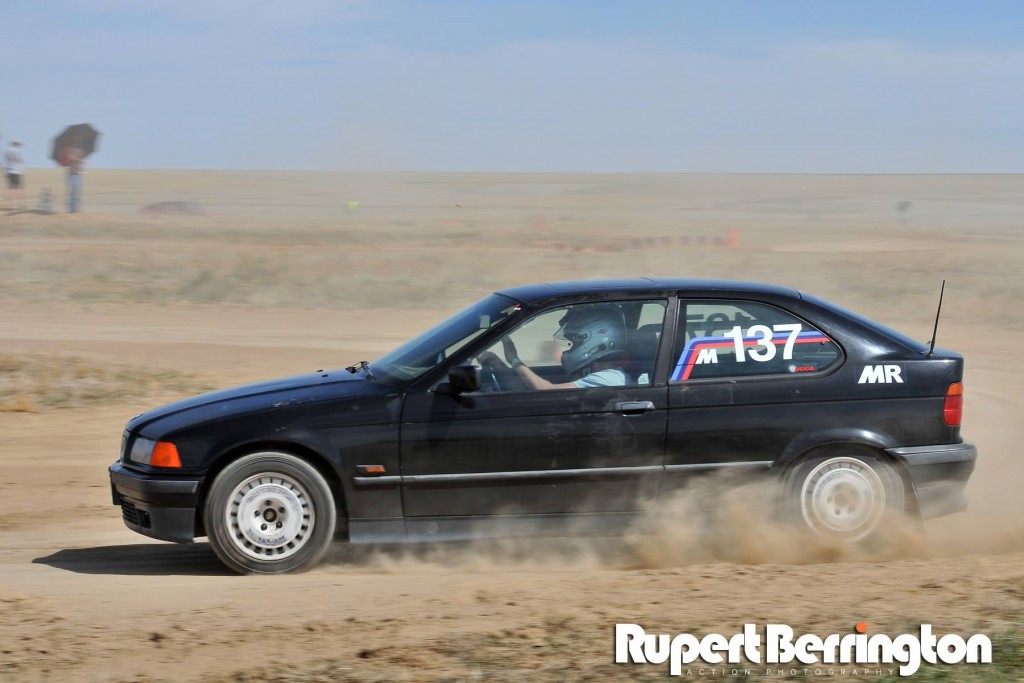 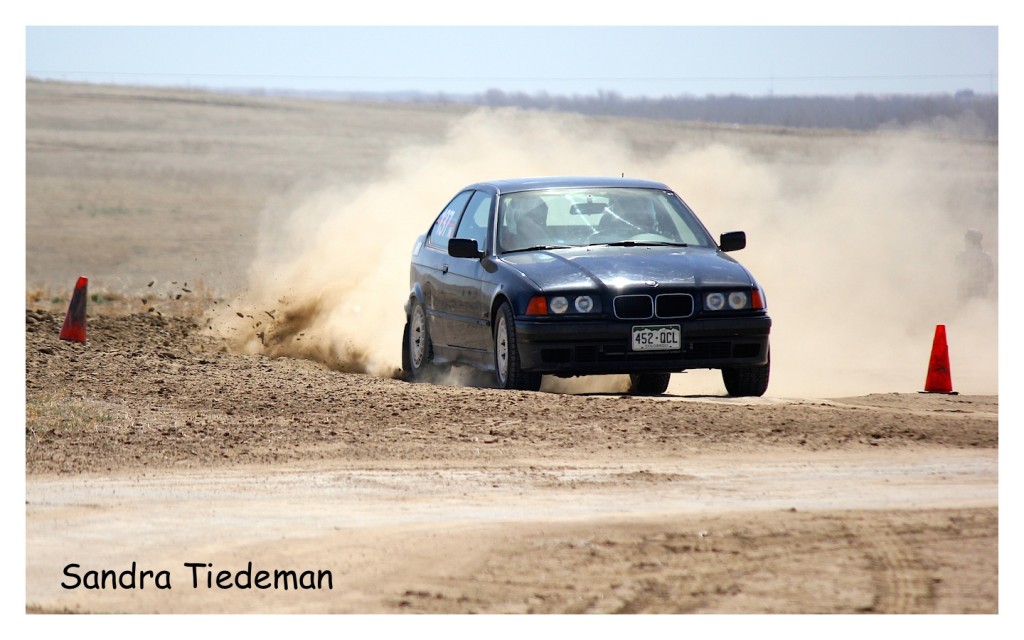 I was getting ready to head out when Tim Hardy approached me with a big smile on his face. “I have a shot of you from today and it is hands down the best shot of the day.” Tim is a video professional. You have likely seen some of his work on TV no matter where you live, but he is also a racer with a pretty impressive resume… seriously… google him. I stuck my eye on the eyepiece of the camera and saw the best clip I have ever seen of myself.

As a photographer (my day job) I am used to capturing other people’s accomplishments and making them look good. So it is incredible when you look into the camera and see yourself.

Building this car has been a lot of work, it has required a lot of learning and discipline. If you are taking on this type of project you will learn so much more than simple car repair and I think it is something everyone should experience at some point. This build took me about a year, for various reasons, but I was able to stay within my budget so I feel pretty good about the whole experience. Remember the project car mantra, it will take longer and cost more than you expect, so estimate high on time and money, but it will pay you back in experience and adrenaline.