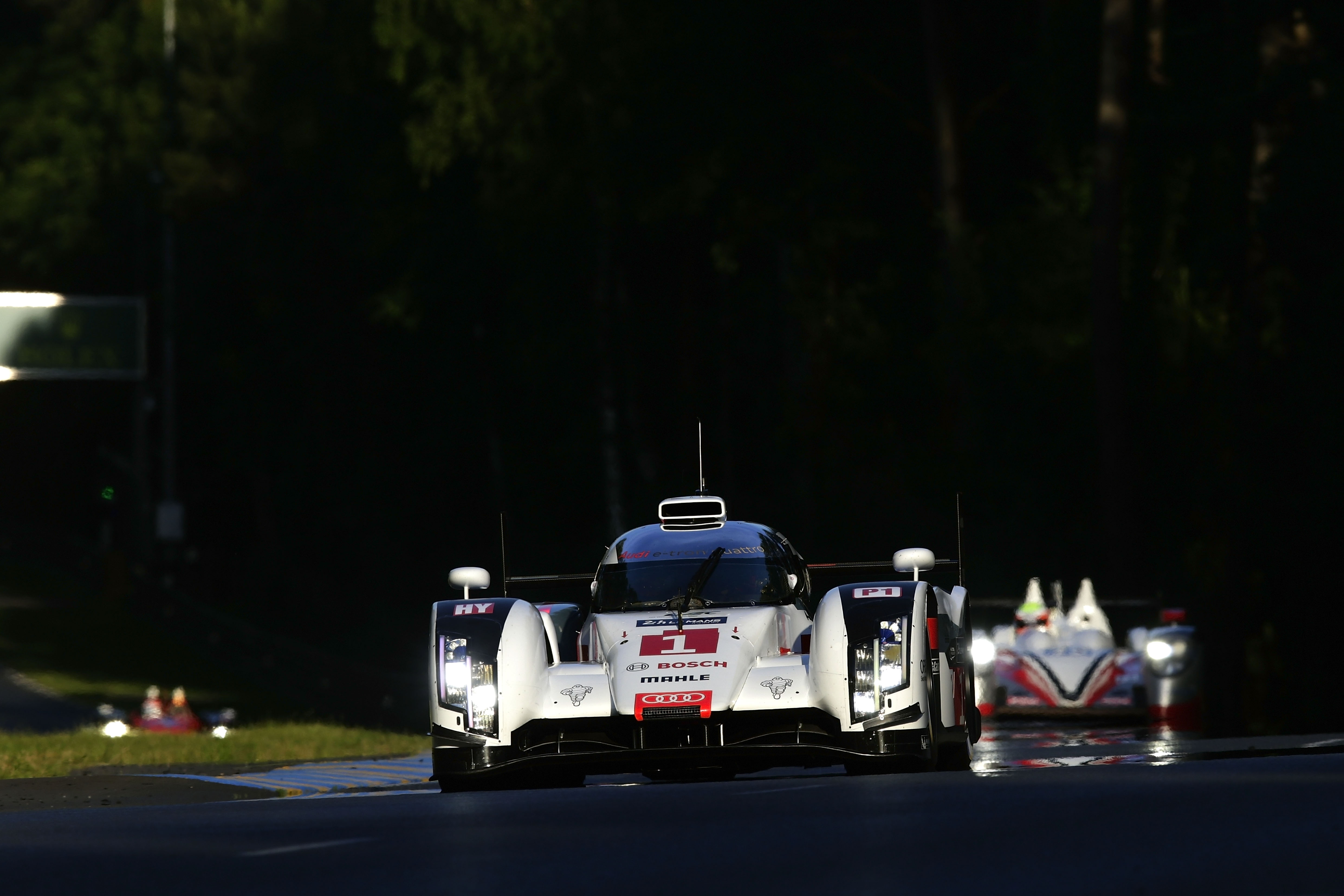 Audi has won a ‘race before the race’ in the Le Mans 24 Hours. Following the serious accident on Wednesday, the mechanics of Audi Sport Team Joest managed to prepare the #1 Audi R18 e-tron quattro from scratch again in record time overnight – a feat that caused a sensation around the world. 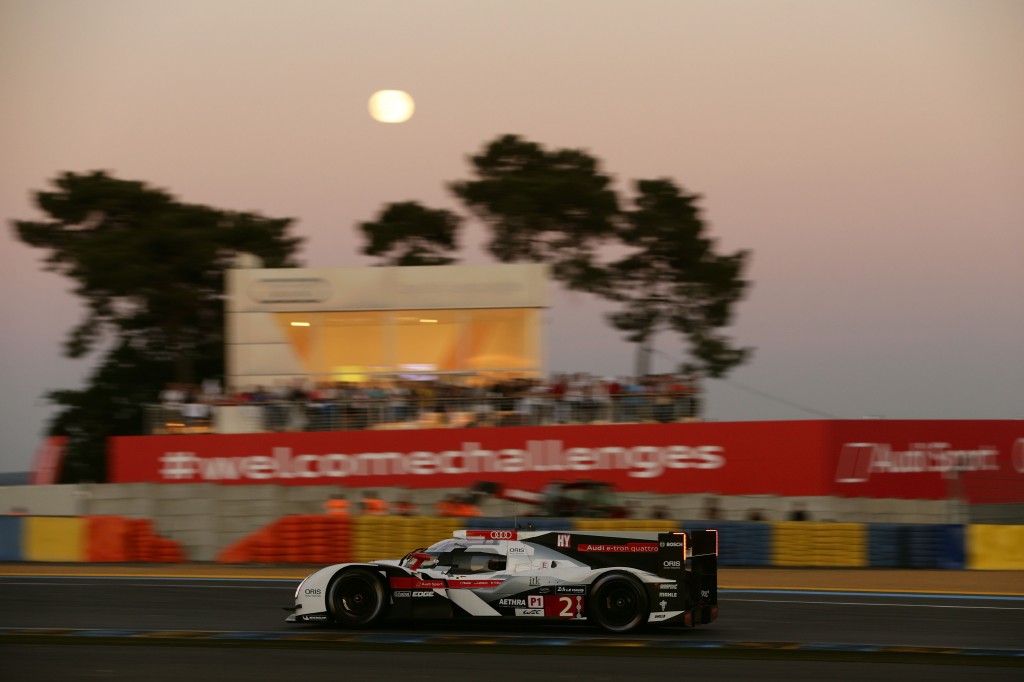 Before the first qualifying session on Wednesday night was over, Audi Sport Team Joest began to assemble a new Audi R18 e-tron quattro on the base of a spare monocoque. The spectators and members of the media at Le Mans could hardly believe their eyes when three Audi R18 e-tron quattro cars were standing in the pits again on Thursday night. In the afternoon, the R18 passed Technical Scrutineering and car number ‘1’ was ready to run again in time for the second qualifying session on Thursday night.

A defective sensor and guard rail contact by Lucas di Grassi caused further minor setbacks in the second qualifying session. But in the final third qualifying, which was extended to 2.30 hours, the newly prepared Audi R18 e-tron quattro was running without the slightest problem late on Thursday night. 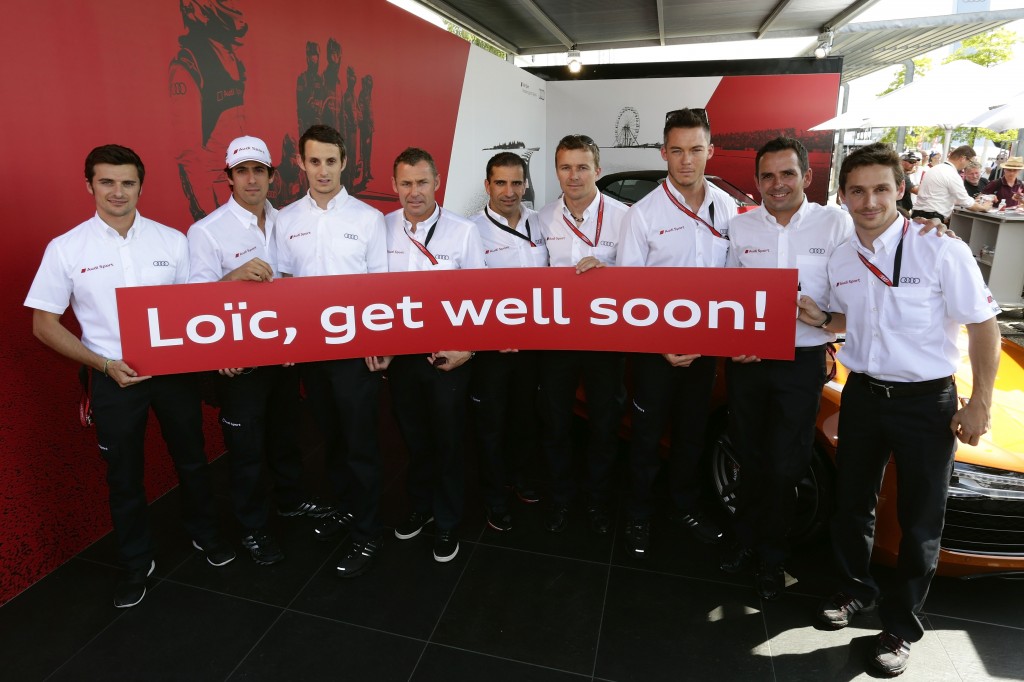 There is good news for the fans of Loïc Duval too. On Thursday, the Frenchman was released from the hospital where he had spent the night under observation as a precaution. The Frenchman briefly visited his team and team-mates in the paddock before heading home to Geneva together with his father in order to recover from the consequences of the accident for the next few days.

Loïc Duval’s name will continue to be present on the #1 Audi R18 e-tron quattro at Le Mans. His place in the cockpit was taken over by the Spaniard Marc Gené. Together with Lucas di Grassi and Le Mans record winner Tom Kristensen, Gené will start the race from grid position seven. The fastest time of car #1 was achieved by di Grassi in 3m 25.814s. 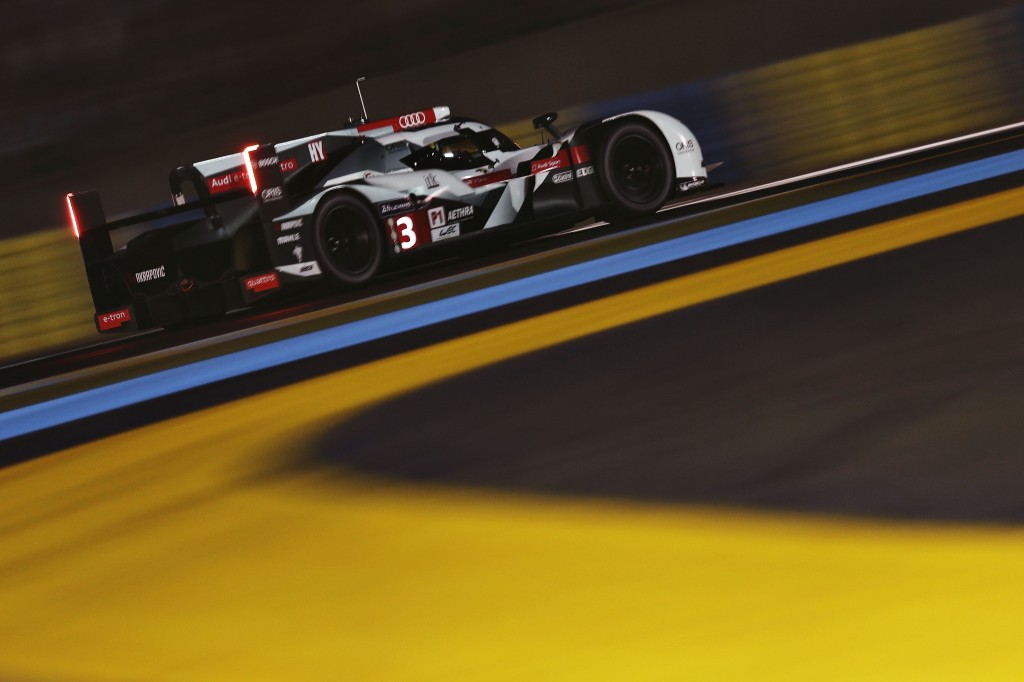 The two other Audi R18 e-tron quattro cars were able to complete the test program on Thursday as planned and will be sharing the third row of the grid on Saturday. The fastest lap within the Audi squad was achieved by Oliver Jarvis shortly before the end of the second qualifying session in 3m 23.271s although the Briton had to reduce his speed due to yellow flags in the last chicane and lost several tenths of a second. Jarvis is sharing the cockpit of car #3 with Le Mans rookie Filipe Albuquerque and Marco Bonanomi.

André Lotterer in the #2 Audi R18 e-tron quattro secured sixth place on the grid for himself and his team-mates Marcel Fässler and Benoît Tréluyer by setting a time of 3m 24.276s. 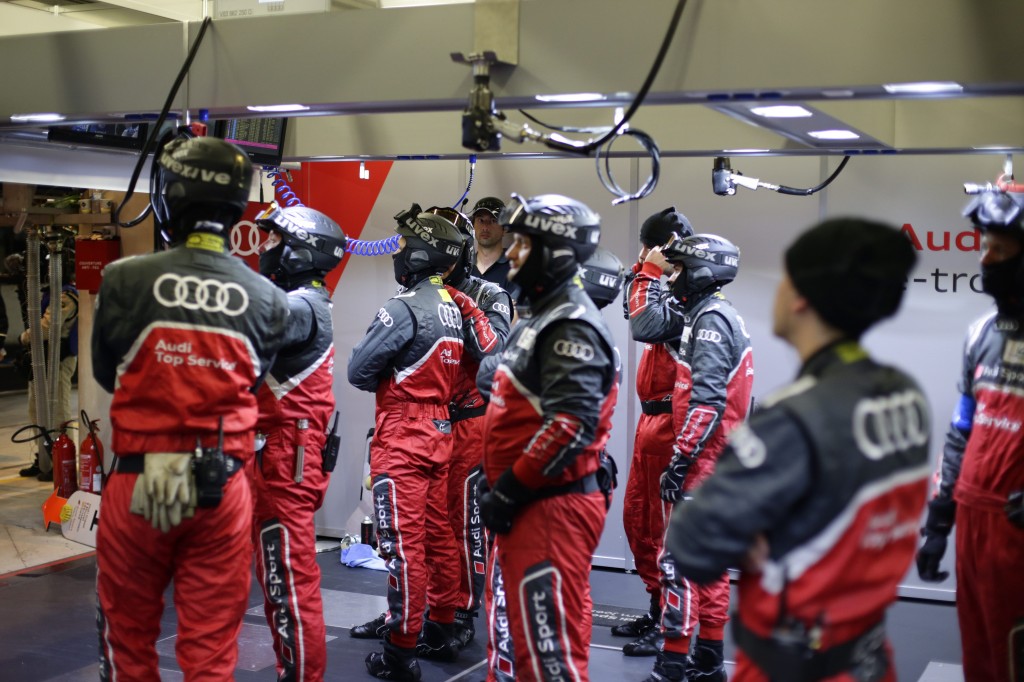 All nine Audi drivers completed the prescribed night laps on which they again had the opportunity to experience the advantages of the Audi laser light. The Audi R18 e-tron quattro is the first Le Mans prototype with laser light and continues Audi’s string of technical innovations in the Le Mans 24 Hours. The night before the race, the brand with the four rings will also be presenting its first production model with laser light at Le Mans: the Audi R8 LMX.

The two-time Formula 1 World Champion Fernando Alonso will be sending the field at Le Mans on the long journey twice around the clock on Saturday at 15.00. The world’s most important endurance race will be broadcast live by 31 TV channels and aired in 190 countries. In Europe, Eurosport will provide live non-stop coverage. On www.audi-motorsport.com, Audi offers free coverage by live streaming from the onboard cameras of the three Audi R18 e-tron quattro cars from 14.30 (CEST) on Saturday. On Facebook and Twitter, Audi Sport will provide extensive live reports from Le Mans as well. 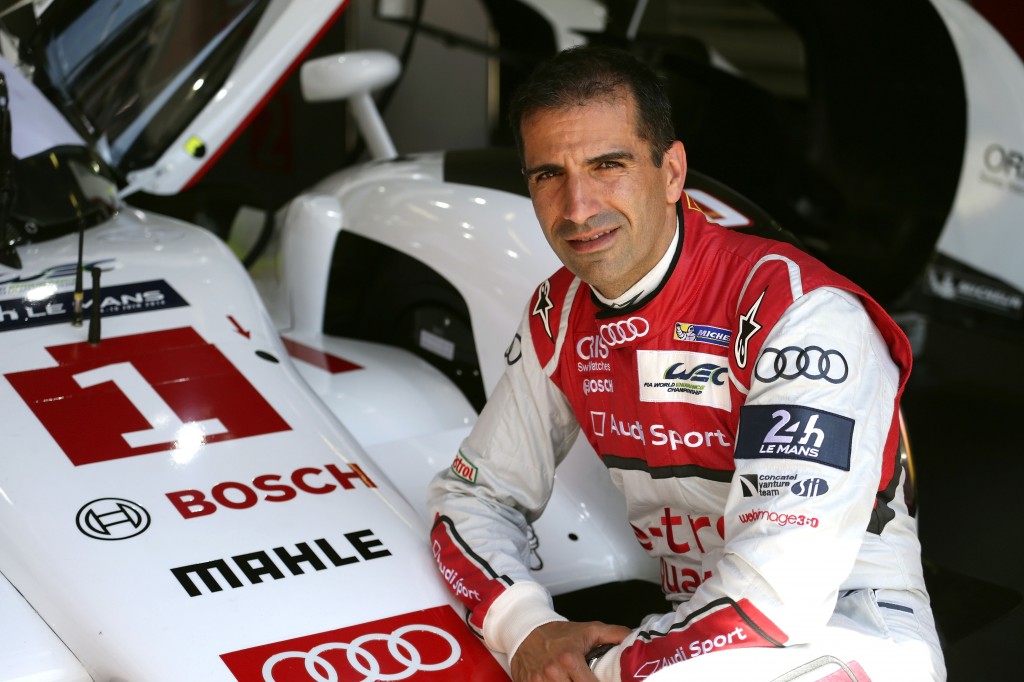 With twelve wins in only 15 runs Audi is the most successful brand in recent Le Mans history. The top five in qualifying on the 13.629-kilometre race track were separated by less than 1.5 seconds. As a result, suspense before the race which some 300,000 spectators are expected to attend is huge. More than 1,000 members of the media – some of them several days ago – have arrived at the venue to watch the first meeting of the two most successful brands in Le Mans history – Audi and Porsche.

Dr. Wolfgang Ullrich (Head of Audi Motorsport): “For us, it was important to put the three cars on the grid prepared as best we could despite the serious accident on Wednesday. Although there was another minor accident with our car No. 1 on Thursday, we managed to do this well. Afterwards, we fully concentrated on the optimal race set-up and have now created a good starting base for all three teams.”

Chris Reinke (Head of LMP): “This was an intensive day for the whole squad. Not only because we put in a night shift after the accident yesterday but also because we were obviously concerned about Loïc’s (Duval) condition. Now we’re all relieved that he’s well and has left the hospital. We completed our program for qualifying with concentration and clearly placed the main focus on preparing for the race. All drivers are feeling comfortable in the car – that makes me optimistic that we’re going to deliver a solid and hopefully successful performance.”

Ralf Jüttner (Team Director Audi Sport Team Joest): “The positive part first: We had three cars in qualifying, the No. 1 that was prepared from scratch again overnight and the other completely rebuilt ones. Initially, No. 1 had some problems with a sensor and then another, this time fortunately, minor accident. We let Marc Gené drive the largest number of laps in the car. I’m particularly pleased with the way our No. 3 fared. But No. 2 was doing well on track too although we’ve got to say that due to the many interruptions and danger zones there was no way to regularly check off all the items on our list. But in total, all our drivers are happy with their cars.”

Filipe Albuquerque (Audi R18 e-tron quattro #3): “I’m pleased with our qualifying session. Although we weren’t in contention for the pole position we’re not so far away with our time. The most important part is that we drove many laps – also at night – and have prepared our car well for the race.”

Marco Bonanomi (Audi R18 e-tron quattro #3): “A qualifying session with two different sides of the coin. On one side of the coin, our car was the fastest Audi and on the other I’m not completely happy with my own times. On two fast laps, I got stuck in traffic shortly before the end. That cost me half a second each time. Aside from that, I’m optimistic for the race. Our R18 is fast and so are we, especially Filipe (Albuquerque) put some great lap times on track at night.”

Oliver Jarvis (Audi R18 e-tron quattro #3): “We knew that qualifying would be a tough battle. Our focus was placed on preparing for the race as best we could. I think we managed to do that well. That’s why I’m very much looking forward to the race.”

Marcel Fässler (Audi R18 e-tron quattro #2): “We weren’t focused on the fastest lap. Qualifying was secondary for us. We just worked on the set-up of the car. At the end of the session, we wanted to drive a qualifying run. Unfortunately, there was a yellow period – that was a shame and not necessary either in my view.”

André Lotterer (Audi R18 e-tron quattro #2): “On the one hand, it was a good qualifying session and on the other a frustrating one. We managed to properly set up the car and to sort the tires. But in the end, the spectators were deprived of a spectacle because there was this long ‘slow zone’ through to the end of the session although there was nothing happening there anymore. As a result, I was able to drive good times only in the first two sectors.”

Benoît Tréluyer (Audi R18 e-tron quattro #2): “Qualifying was difficult but we did a good job in setting up the car for the race. It was a bit disappointing that qualifying at the end was used to test ‘slow zones.’ The track was clean, so I don’t know why this test had to be so extensive. But now only the race counts. We’re ready for it and are going to play our hand.”

Marc Gené (Audi R18 e-tron quattro #1): “The most important thing today was that we confirmed the excellent work of the mechanics with our laps. They put in a night shift to prepare a new car for us that was immediately running well. After car #1 did almost no laps on Wednesday, Tom (Kristensen), Lucas (di Grassi) and I concentrated on completing our mandatory laps. The main thing was to drive many kilometres and the thought of qualifying was just secondary. We’re prepared for the race.”

Lucas di Grassi (Audi R18 e-tron quattro #1): “After Loïc’s massive accident on Wednesday, qualifying on Thursday for us was more like a roll-out with the new car. We had a few issues that we completely resolved. Especially in qualifying three we were able to drive many laps – the car is ready for the race.”

Tom Kristensen (Audi R18 e-tron quattro #1): “The past two days were a tough experience. Our mechanics did a fantastic job overnight. That’s why we were able to use the last session after there’d previously been problems with a sensor. For us, the qualifying session was a roll-out in a way. All three drivers are happy with the car. It wasn’t about the grid position but about preparing the car for the race. I’m looking towards the race with a positive feeling.” 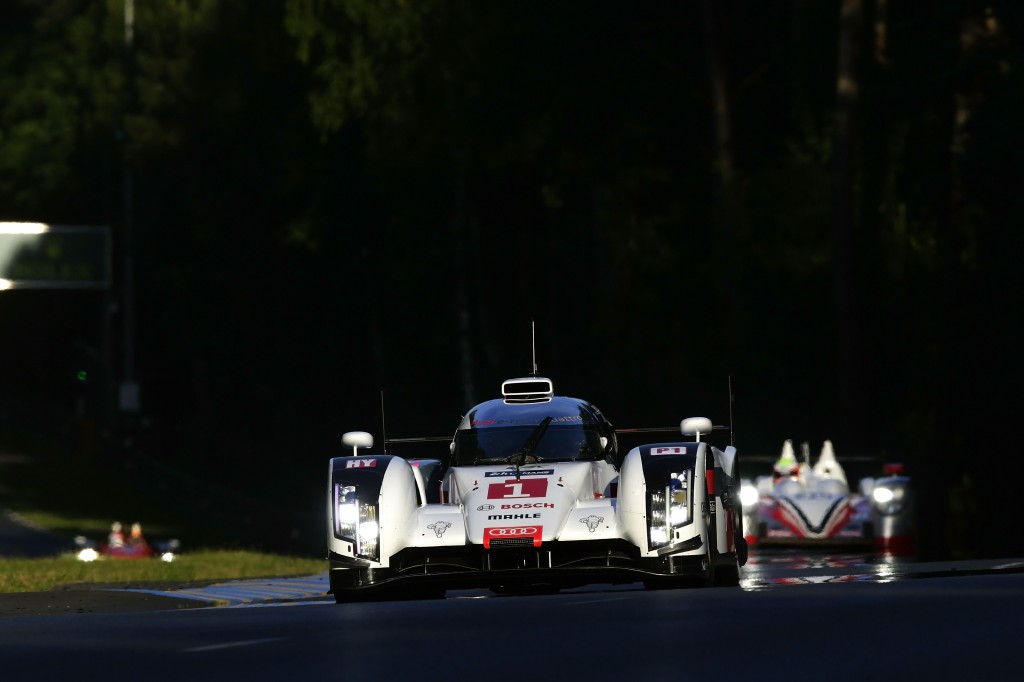