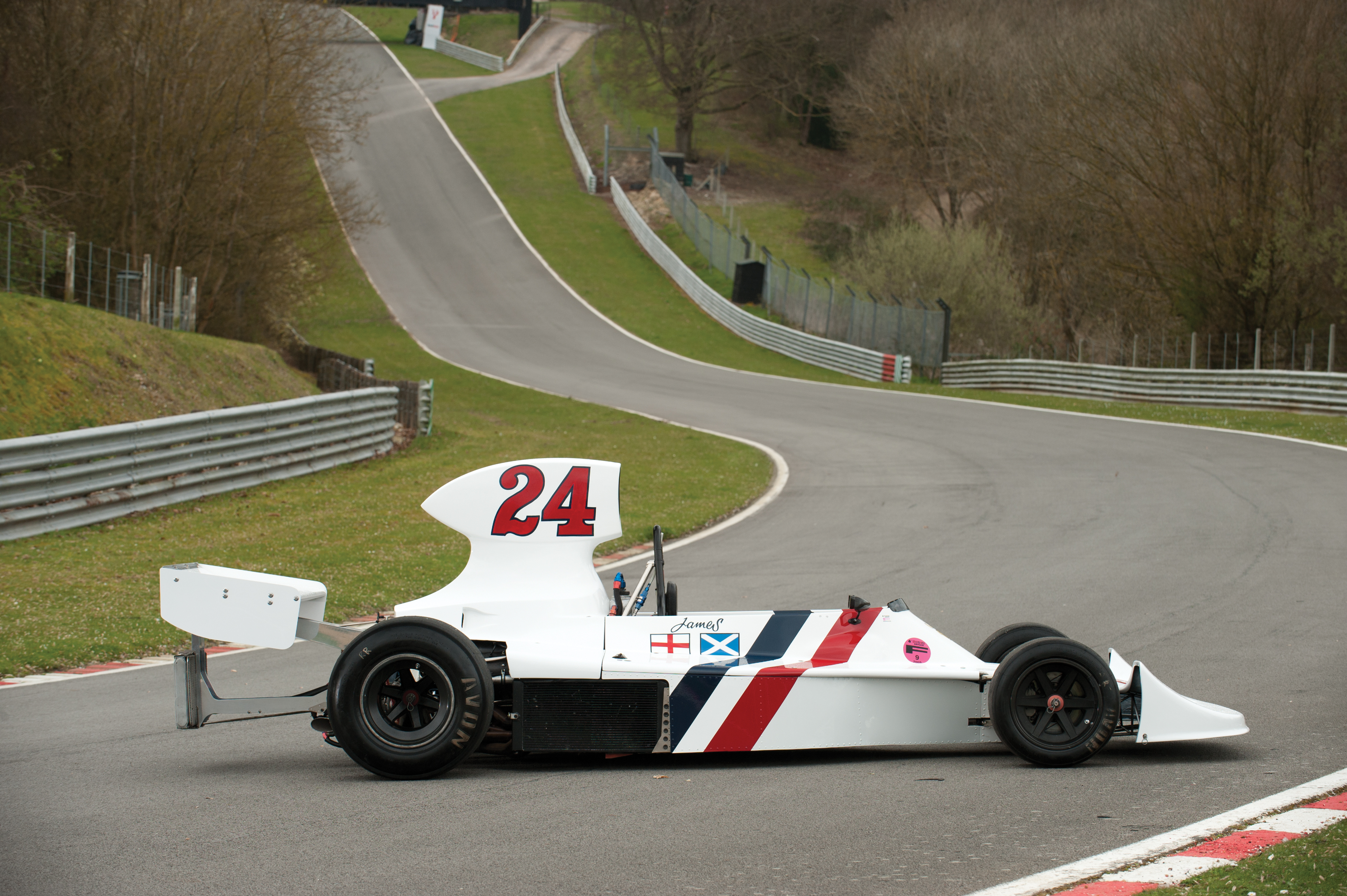 Lord Hesketh’s first grand prix racing car was designed and engineered in-house by Harvey “Doc” Postlewaite (the team previously ran a 1973 March 731). Their new 308, which referred to the three-litre, eight-cylinder DFV engine that powered the car, was assembled by B.S. Fabrication Ltd. in Luton. When James Hunt first laid eyes on the car, he pronounced it simply “beautiful”. He was likewise impressed by the roomy cockpit, which had been tailored to fit his relatively large form. 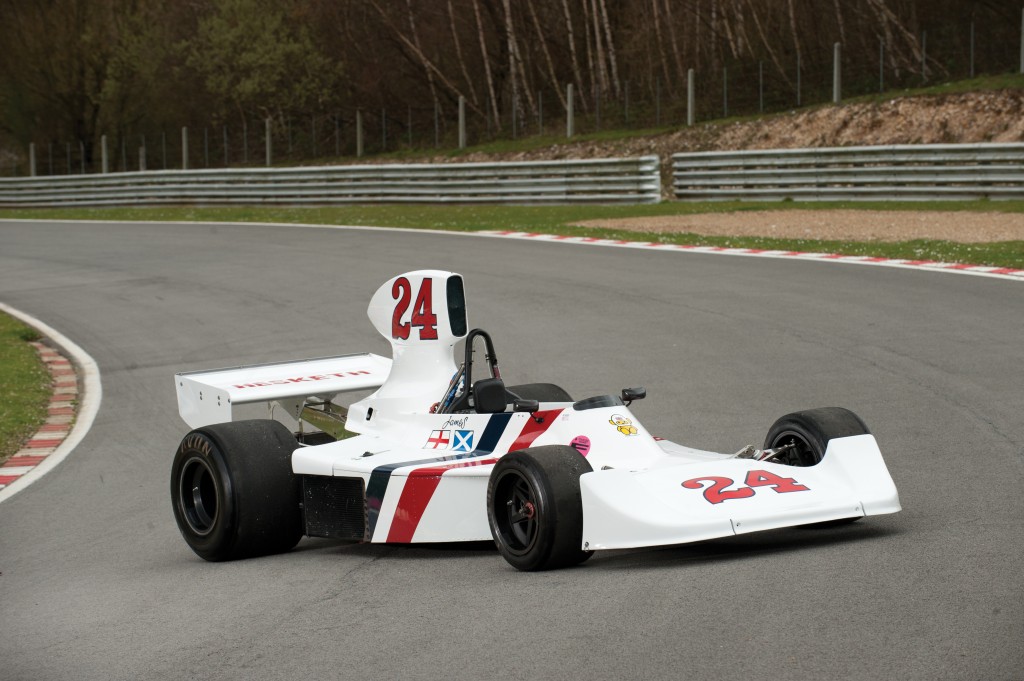 The 1974 season began with the team racing the previous year’s March 731. At the Brazilian Grand Prix, Hunt finished 9th overall in the old car. After that race, several teams stayed on at the Interlagos circuit to continue testing. As Hunt prepared to try out his new Hesketh 308-1, the rival teams, with stop-watches in hand, looked on. Being competitive and faster than the March team cars was one thing, but as the Formula One pundits opined, “Wait until Hesketh tries building his own car. Then he’ll find out how difficult this business is!” 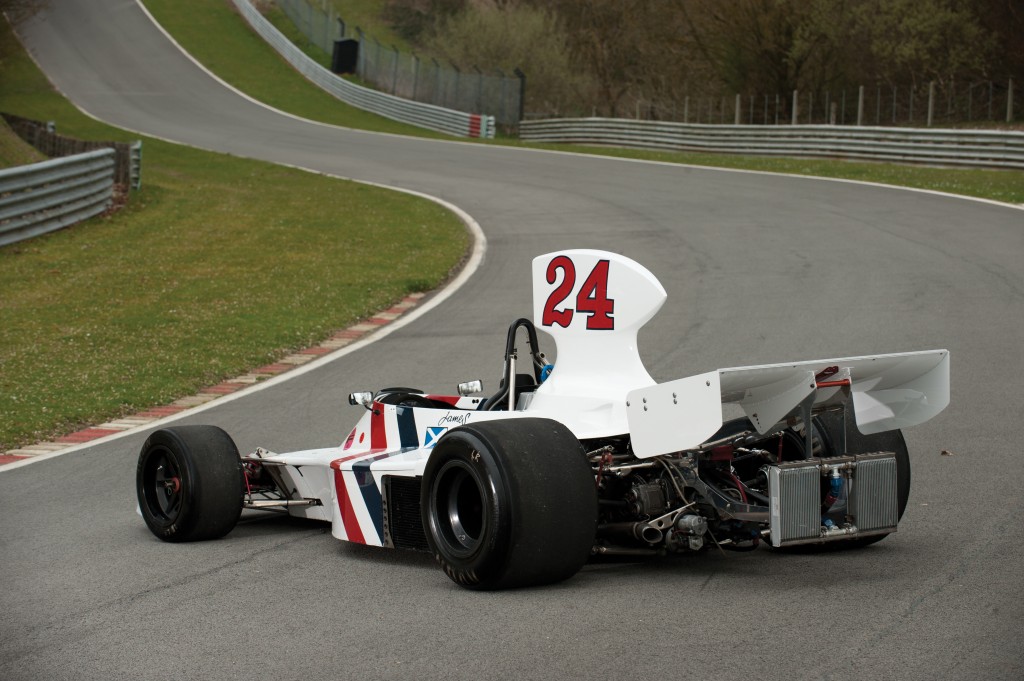 After a few warm-up laps and some adjustments, Hunt was ready for a “lap in anger”. To everyone’s surprise, that famous lap proved to be a second faster than Emerson Fittipaldi’s pole-qualifying time in the McLaren, and a full four seconds better than Hunt’s own qualifying time in the old March! For Doc Postlewaite, this immediate display of speed, in front of many of their disbelieving rivals, was one of Hesketh Racing’s “most satisfying highlights”. 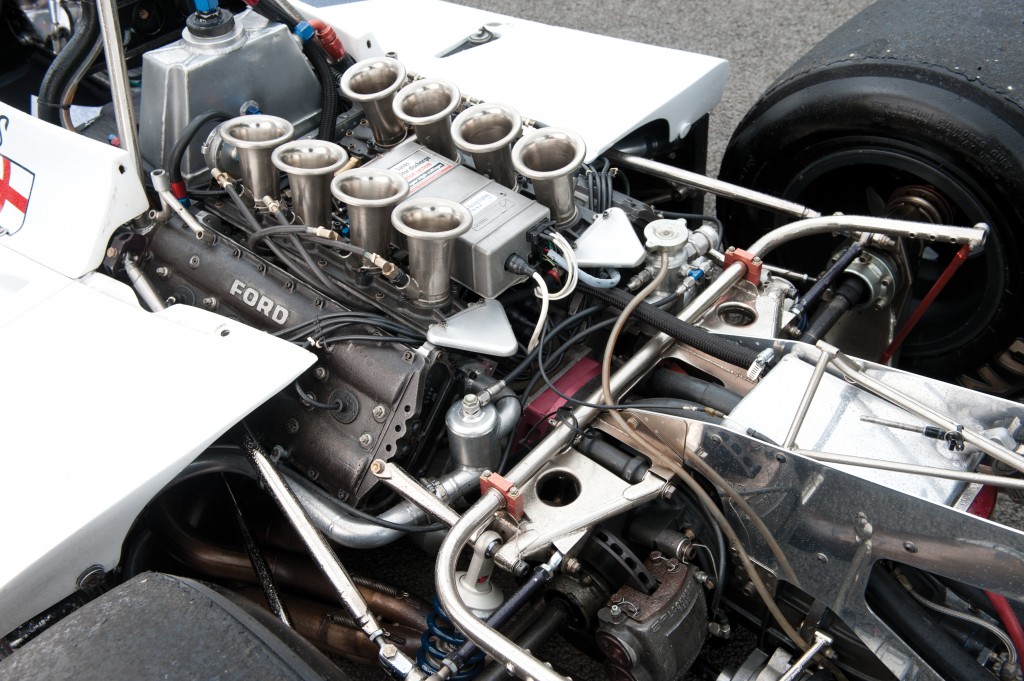 Chassis 308-1’s first real test came at the Race of Champions at Brand’s Hatch. Here, James Hunt would qualify on the pole, but after contact with another car caused a loss of front bodywork, Hunt was forced to eventually retire due to handling problems. Hunt’s first race win in this car came at the Silverstone International Trophy race, beating Ronnie Peterson’s championship Lotus with a daring late-race pass. 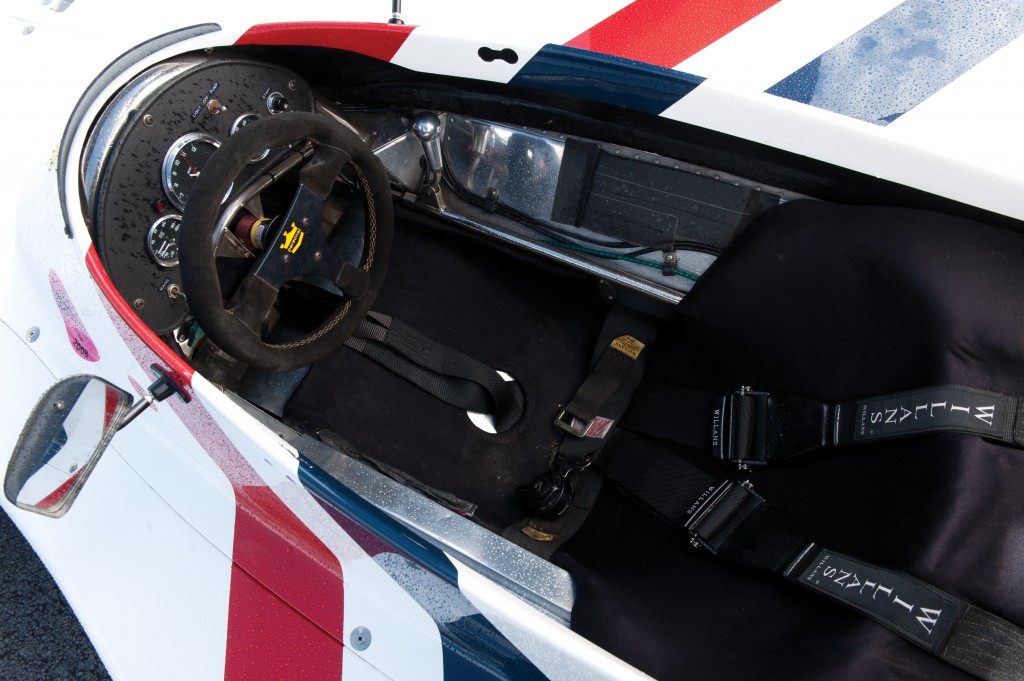 Pete Lyons, in his 1975 book Formula One, The Drivers, aptly wrote: “Carefully weighing up the differing performance characteristics of the other car, he decided at which point in the circuit he should make his move—selecting Woodcote Corner, one of the most spectacularly fast corners in the whole GP schedule, a frightening matter of feathering the throttle and catching lurid slides at 160 mph—and by chance the most public corner at Silverstone! The way James threw his Hesketh beneath Peterson’s Lotus and powered through to take the lead and win the race became etched on that imaginary but very real bronze tablet that every British enthusiast keeps near his heart. It was a magnificent moment!” 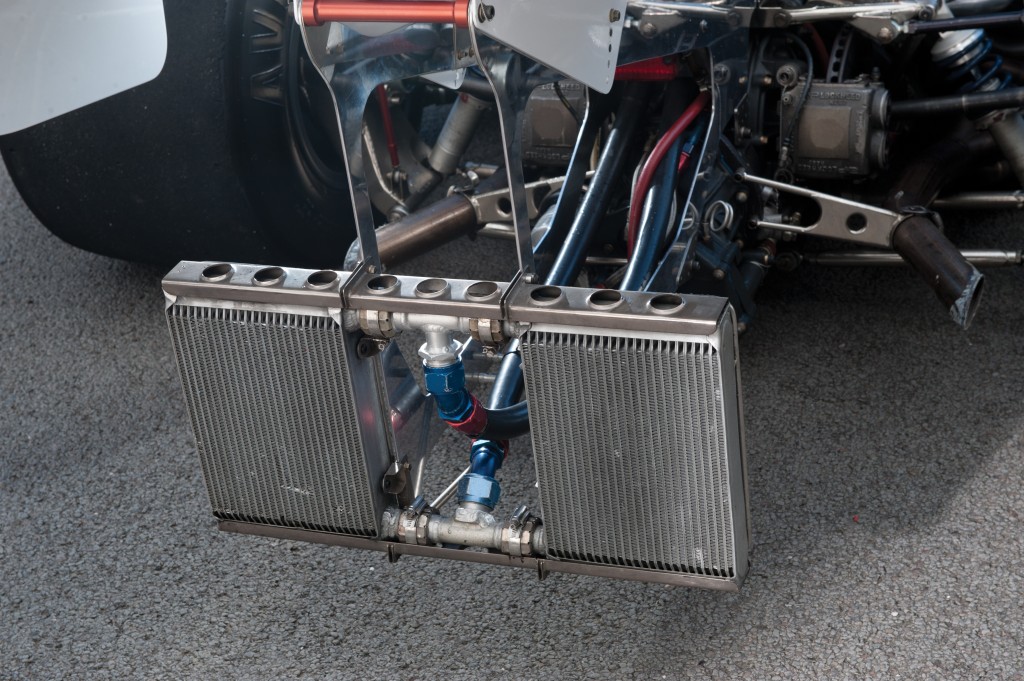 By mid-1975, chassis 308-1 had been sold to Harvey Stiller and his associates for Alan Jones to drive. In 1975, driver/journalist Harald Ertl was at the wheel. In 1988, P. Senkowsky bought the car from Ertl’s partner/ technician Gustave Hoeker. Various modifications, including ones performed on the radiator and suspension and certainly various body liveries, had by this time taken place. 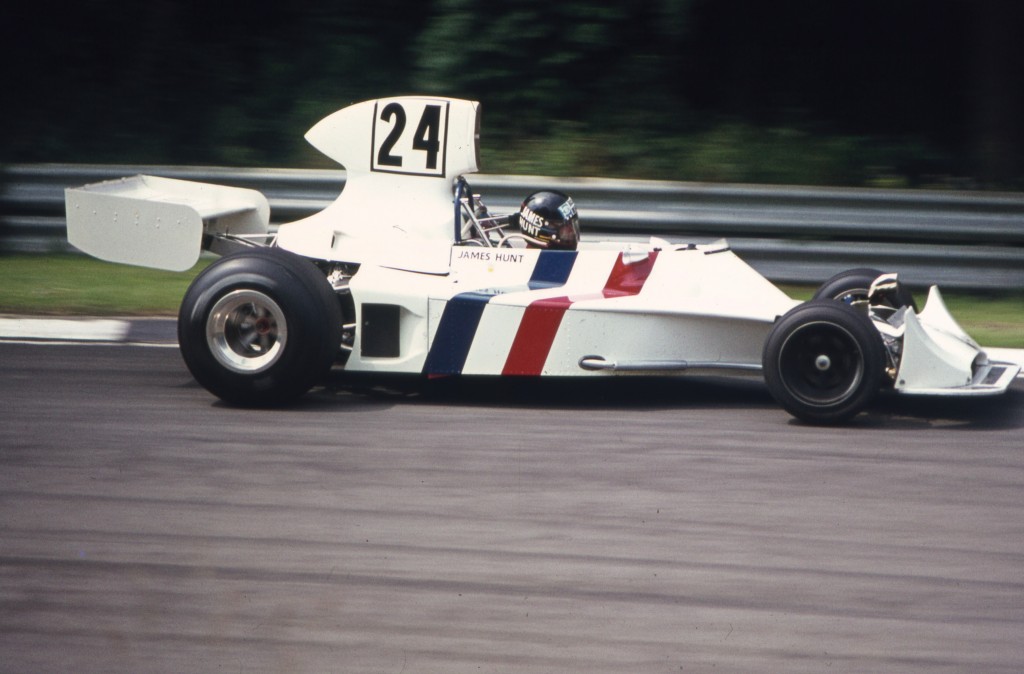 To his credit, the fifth owner undertook a full restoration back to 1974 specifications after learning of its history. He was aided in this task by Bob Sparshott, of B.S. Fabrication Ltd., who was one of the original builders of this car’s tub and suspension. Lord Hesketh himself helped the cause by supplying various details. In June 2006, chassis 308-1 was sold to the current owner, who has successfully competed, after a second renovation, in historic grand prix events at Road America, Las Vegas, Sonoma, Circuit Gilles Villeneuve, Silverstone, Nürburgring, and here at Monaco.