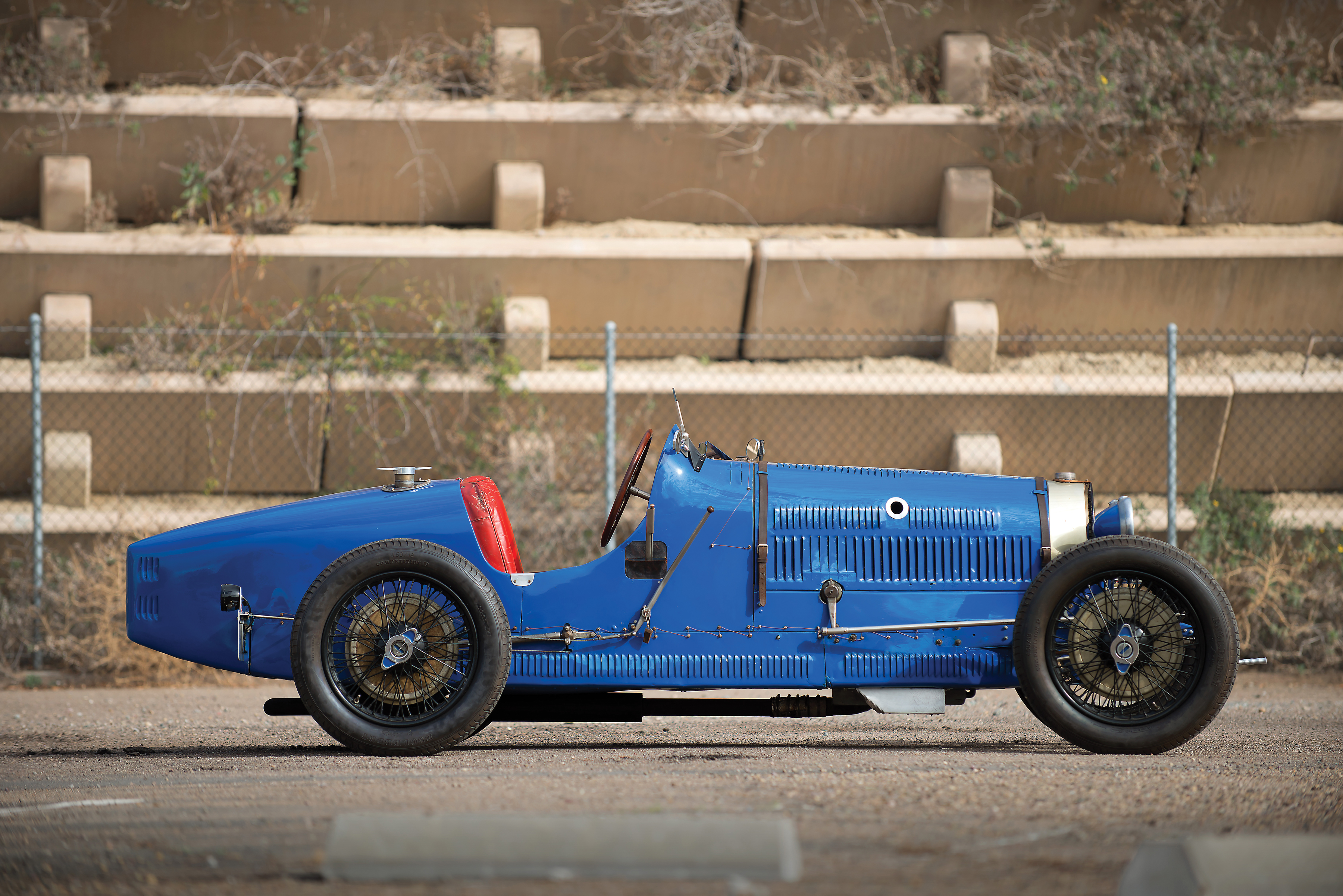 The Bugatti Type 37 was introduced in November 1925, and it proved to be one of the most iconic and instantly recognizable racing cars to ever leave Ettore Bugatti’s facilities in Molsheim, France. Like its predecessor, the Type 35, the Type 37 provided all the performance that one desired, yet it also offered an excellent level of practicality for road-based events and rallies. However, as opposed to the eight-cylinder unit found in the Type 35, the Type 37 was fitted with a four-cylinder engine. This inline-four engine was considered by many to be more reliable, yet it also provided just as much excitement to the individual behind the wheel as its bigger brother did. Not only could the Type 37 be driven hard all day long, but it also proved reliable enough to be driven home at the end of the day under its own power, even with an additional passenger riding along. 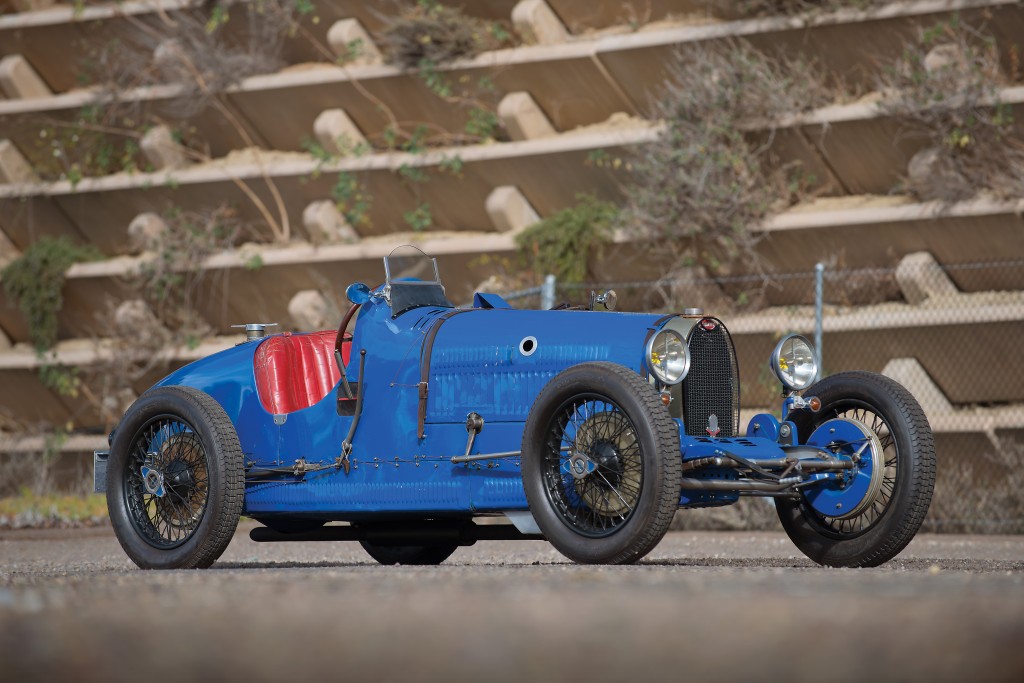 Compared to its larger eight-cylinder siblings, the Type 37 relies on mechanical simplicity, finesse, and lightweight design for its performance, rather than the over-engineered brute force that was more typical in racing cars of the period. With a compact yet powerful 1.5-liter engine, the Type 37 was easily capable of 90 mph. Braking was also effective, and the whole package was quickly identified as a race-winning car for any serious driver on the international racing scene. 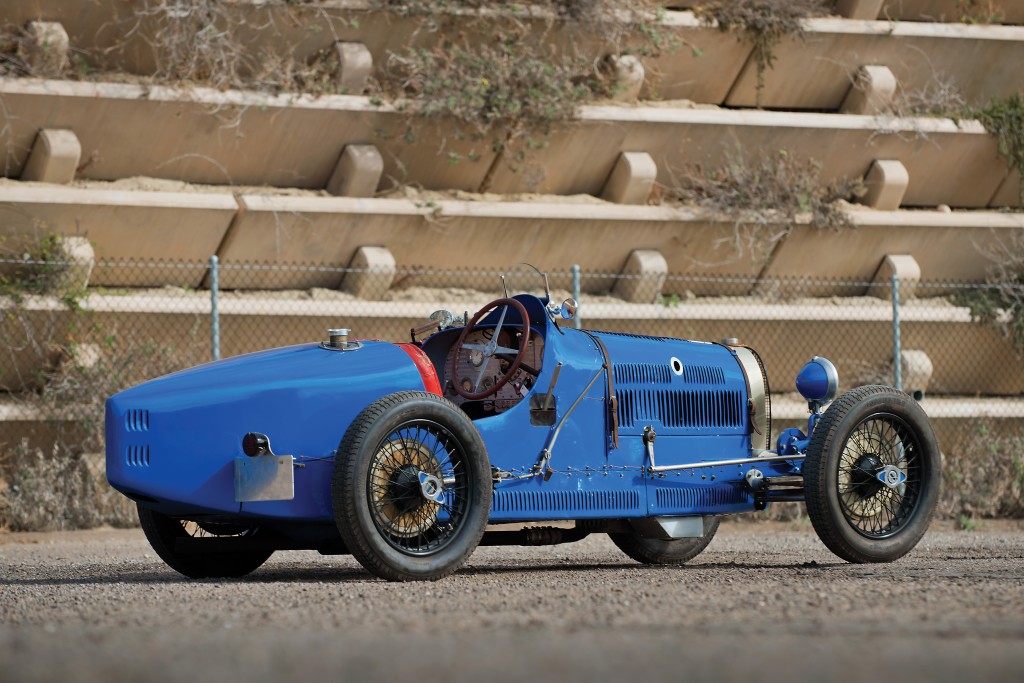 Even though the Type 37 was very competitive, more horsepower was sought from its inline four-cylinder engine to make the car even more potent. About 18 months after the Type 37’s initial introduction, Bugatti introduced the Type 37A, with the hallmark improvement being a Roots-type supercharger. Performance was drastically improved over the naturally aspirated model, and the car was capable of reaching a top speed of 122 mph. The car proved to be quite successful, and it saw action in some of the world’s greatest endurance races at the time, including the Mille Miglia, the 24 Hours of Le Mans, and the Targa Florio. While Bugatti produced a totally of 286 Type 37s, only 76 were supercharged from the factory. 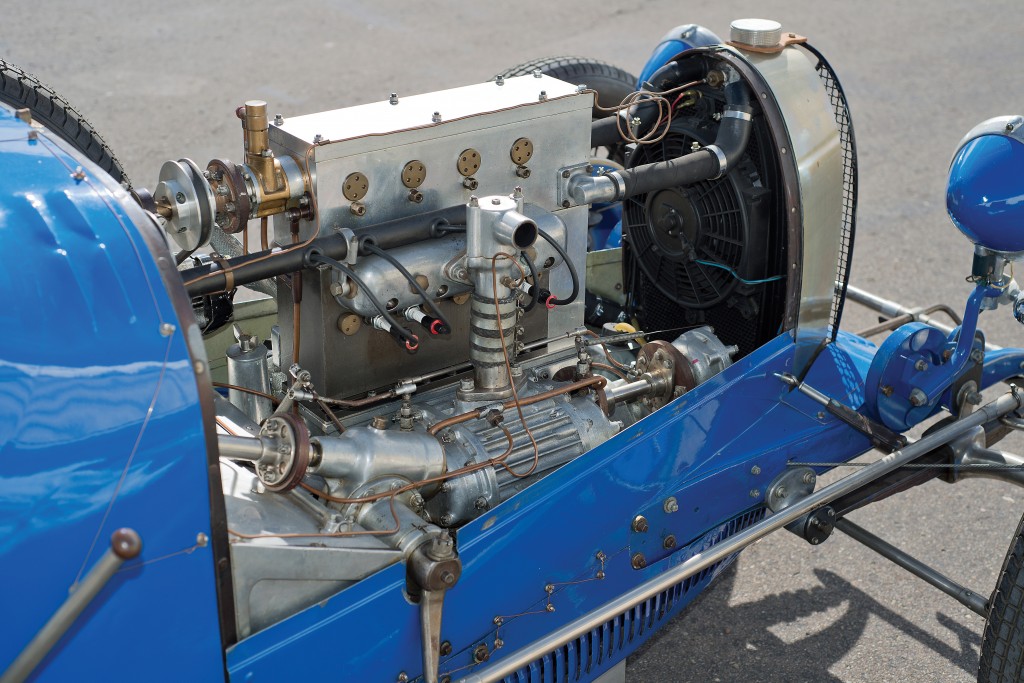 The example presented here, chassis 37343, was first delivered new to Belgium in June 1928, according to Bugatti factory records that were cited by Bugatti historian David Sewell. Pre-war history on the car was not documented, but Sewell sites that it was sold by Dr. Suzanne Lentz, of Luxembourg, to Jean Timmermans, of Limburg, Holland, in June 1961, who registered the car with number L 14351. In 1964, the car was restored under the ownership of Tim Honig, living in Amsterdam, before it was exported to the United States. The car passed through two subsequent owners before being purchased by Gordon Barrett, of Indianapolis, Indiana, who displayed the car in the Auburn Cord Duesenberg Automobile Museum in Auburn, Indiana. According to David Sewell, by this time, the original engine had been replaced with the engine from chassis 37319, another original 37A engine, wearing number 218CP, and a supercharger from chassis 37318. The transmission was also found to not be original to the car, but it was of the correct type for a Type 37A. 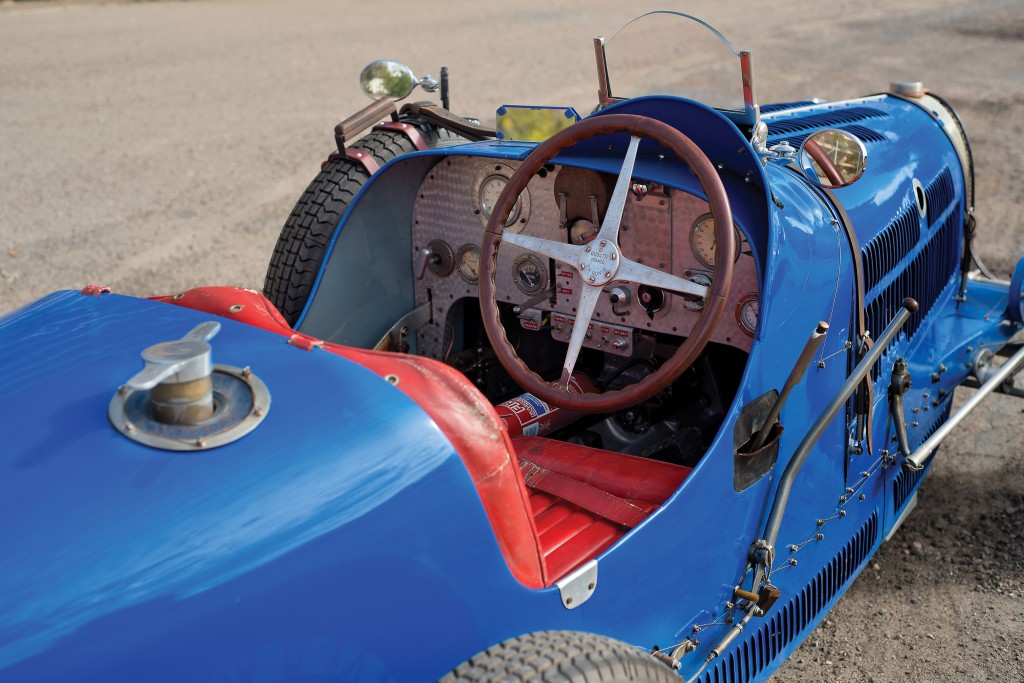 Sometime thereafter, 37343 was acquired by an Englishman who brought the car to the UK in the mid-1990s. During this time, 37343 was inspected by David Sewell, and it was found to be a “relatively original example of the Type 37A model” that was still retaining its original coachwork. In June 2000, the Type 37A was sold by Peter Mckay Rae, of Hampshire, to Mr. Hidekazu Arita, of Yokohama, Japan; Rae noted the car’s condition as “in good running order” on the Bill of Sale. The car left England via the port of Southampton in August 2000, destined for Yokahama. In its present American ownership, this Bugatti has always been well looked after. More recently, a modern dynamo and radiator fan were installed to ensure that the 37A does not overheat on long rallies in warm climates. Both components have been added in such a way that they can easily be removed without detriment to the overall originality of the car. Following a recent mechanical service in the past year, there is no doubt that this splendid Bugatti is ready to drive. 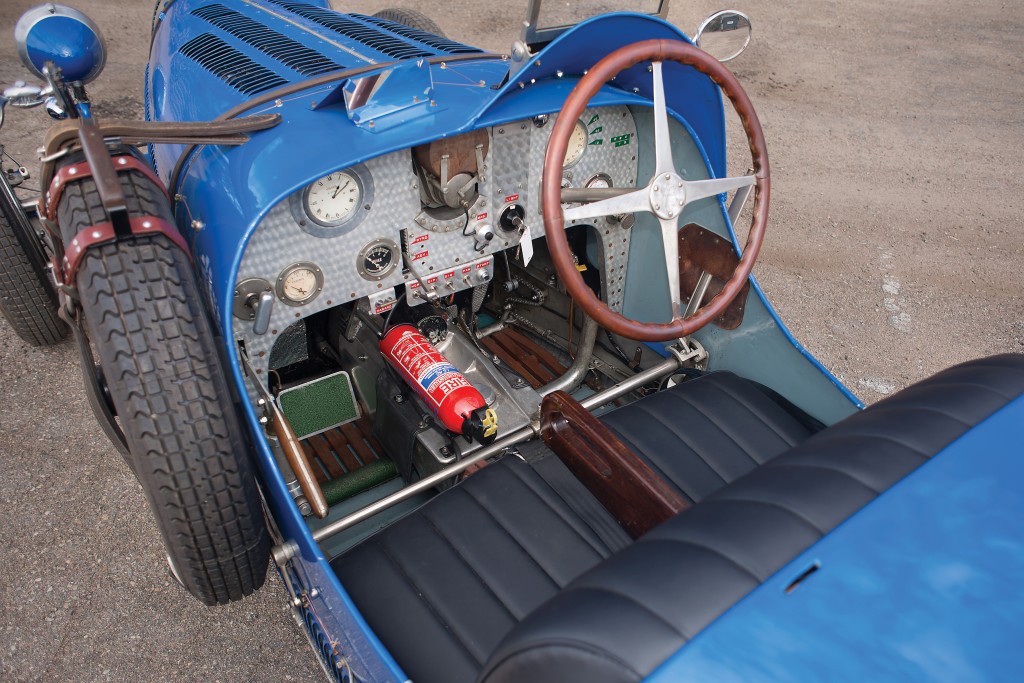 Interestingly, it should be noted that this car comes with two different interior colors, one black and one red, which can be switched out for different use with little effort. While the red displays more signs of age, the black appears freshly restored, as it displays nary a crease, and it matches the presently fitted black wire wheels beautifully. Documentation on the car totals to over 100 pages and includes the Sewell report, the Bill of Sale between Rae and Arita, shipping invoices from the UK to Japan, documentation of marine insurance for the car’s shipment, and service receipts from Bugatti specialists in the UK, Japan, and its most recent service by Bugatti specialists in the United States, which occurred in the past year. 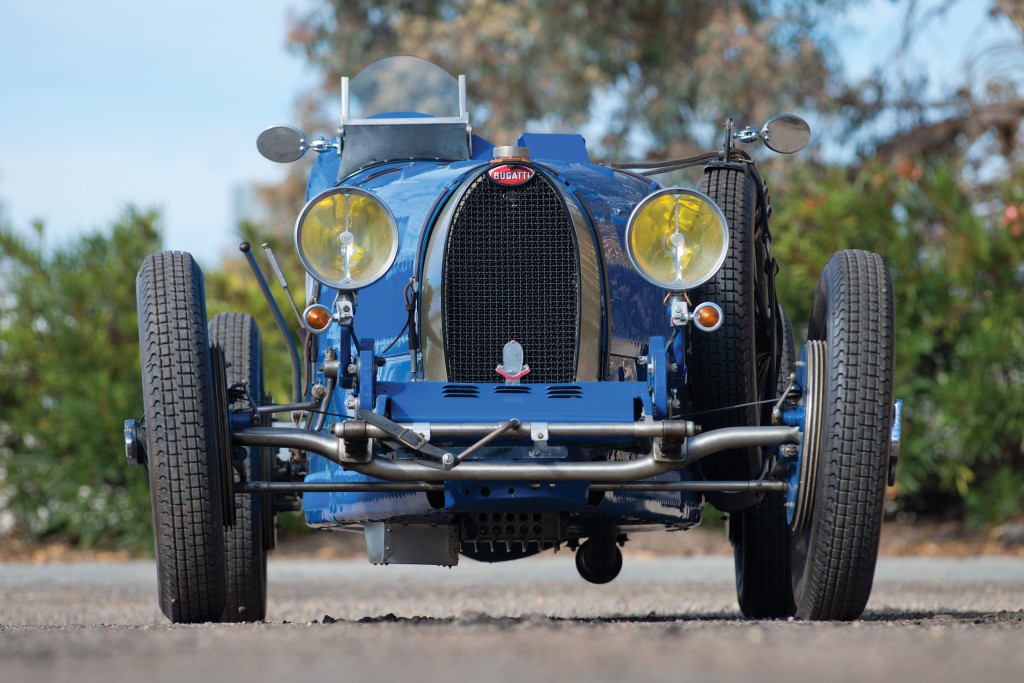 As one of Bugatti’s most celebrated and iconic Grand Prix cars, Type 37As have proven to be highly desirable to collectors not only for their place in automotive history but also for their fantastic driving characteristics and overall panache. To those familiar with Grand Prix Bugattis, the Type 37A is considered to be one of the best-handling models to have ever left Molsheim—a belief that was shared by the late French racing driver Rene Dreyfus. Chassis 37343 is a largely original example, down to its frame, radiator, bulkhead assembly, fuel tank, front axle assembly, rear axle, and even its original and properly stamped chassis plate, and the correct bodywork is also in splendid condition. All of the parts on the car that are not original to chassis 37343 are indeed authentic Molsheim-produced components with correct numbers, which can be used to easily identify their origins.