During our testing for 100 Acre Wood, we found something interesting.  On our third or fourth time down the test stage, we suddenly lost all power.  Notably, when this happened, the temperature gauge suddenly spiked.  We re-started the car, but it was still in limp mode.  So we putted on down to the finish and bled the power from the ignition.  The car ran perfectly normal.  But then it did it again.  And again.  And again.  To figure out if it was overheating, we ran with the fan on.  This didn’t change a single thing, so we ripped the hood off and ran with the fan on.  Going down the stage, it was fine, but on the way back up the stage, it happened even earlier than it had previously.  The next morning, from a cold start, it happened again, instantly.  It was loosely determined that the temperature sensor in the cylinder head was messed up, so we ordered a new one. 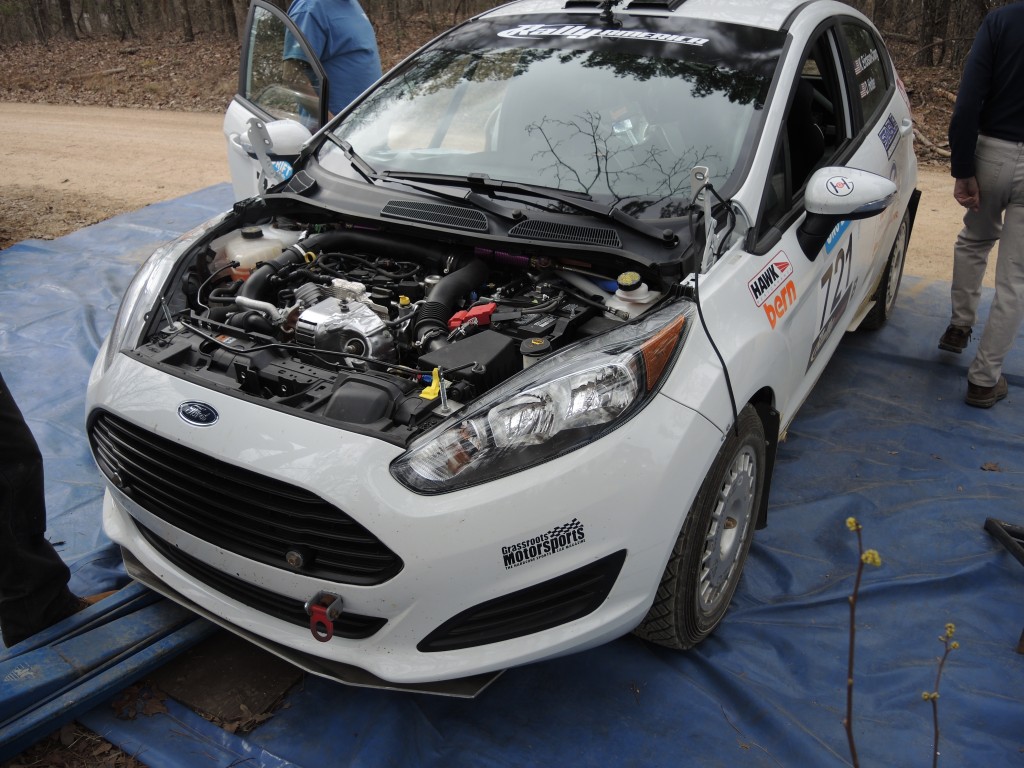 The new sensor went in the car Friday midday during Parc Expose.  We started the rally that afternoon not knowing what would happen. 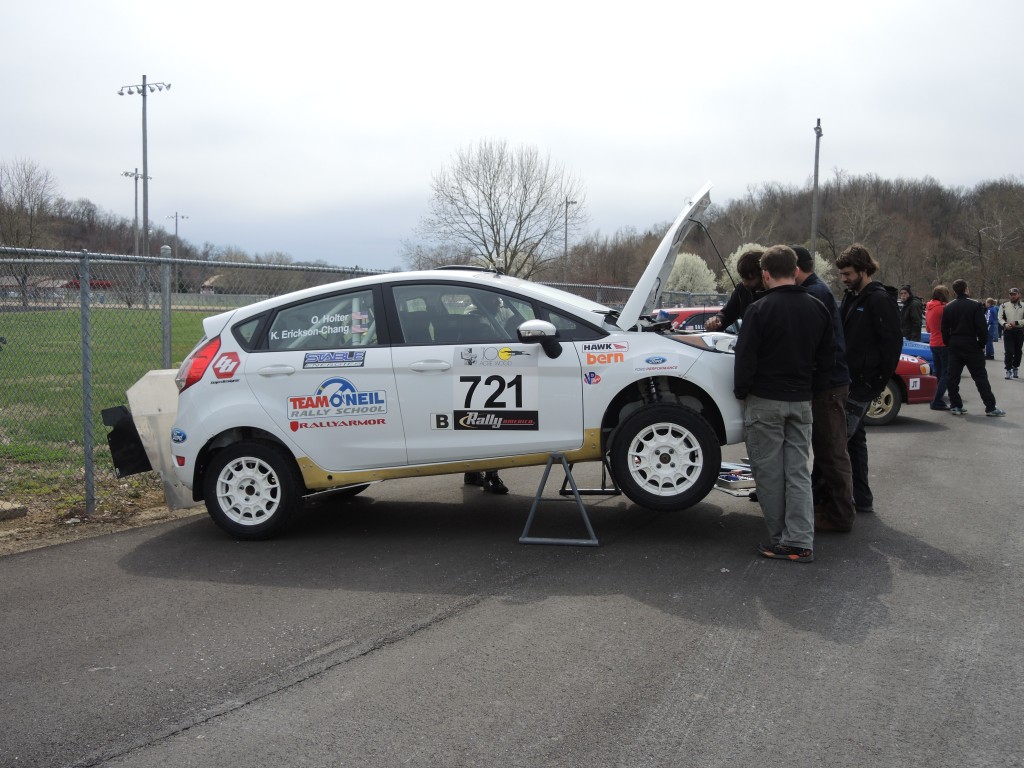 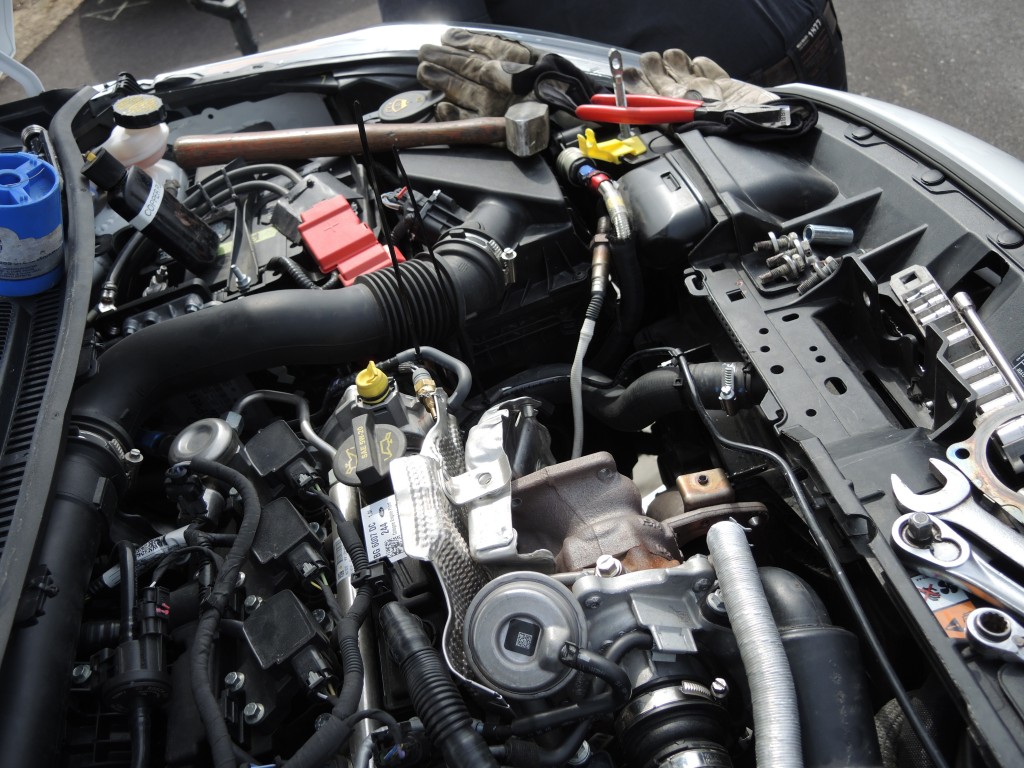 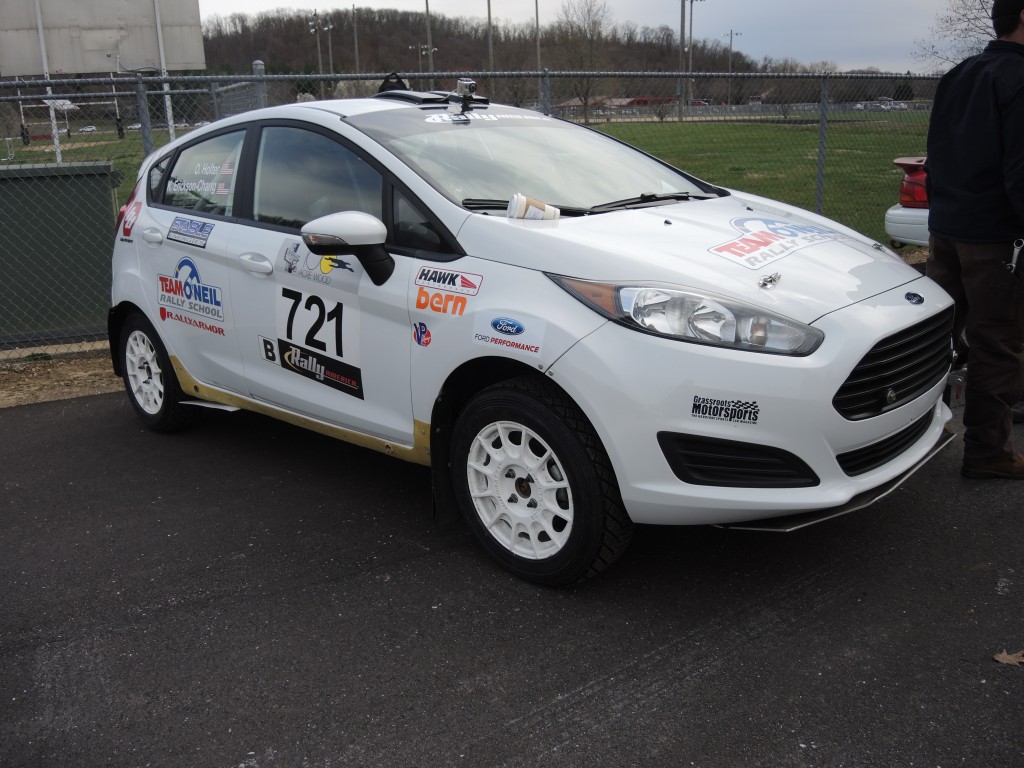 Being the first stage, we didn’t push the car awfully hard on Pandora-Westover.  We had no clue what it was going to do.  Then, we tried to pick up the pace.  On Turkey Trot, it died.. Just once, but we lost a fair bit of time.  Baby Pigeon was red-crossed, so we transited the stage and the cars was just fine.  The Lions Park Super Special went okay.  And then came County Line.  On stage 5, we lost power 5 times.  Each reboot took a good 30-45 seconds to complete, as the car is programmed to leave the power on for xx amount of seconds after turning the key off.  We were passed by 3 cars on stage while traveling 0-5 miles an hour trying to get moving again.  There was one point where I pulled over by a marshal because I was convinced we were dead in the water.  So when we finally crossed the finish line, we pulled over to implement plan B.  Plan B was the old sensor strapped down in the engine bay but not plugged into anything.  We connected the ‘cold’ sensor and made fantastic power with no problems in our way back to service.  Forty-five minutes later we were headed back on the highway, and I felt that something was ‘off.’  I couldn’t pinpoint it, but it became apparent when we couldn’t break 55.  Feeling crazy, I told Ole that it sounded like air when I had the throttle on.  We spent the second leg of the rally (stages 6-9, repeats of 1-3 and 5) with no turbo and about 25% power.  If you’ve ever been in a turbo car with no turbo, you know the sinking feeling of being flat out and still decelerating.  As it turns out, somehow, the nut had backed off of the wastegate actuator, essentially leaving it wide open, and leaving us with an EcoNope.  Strangely, we realized that while down on power, our sensor issues had vanished.

The next day, the turbo issue was fixed, but we still didn’t know what would happen with the cold sensor on Saturday.  But we were hopeful, since it was working so well before the turbo problem occurred.  Well, it didn’t work so well.  After losing power 10 or so times on the way to KP to Ollie on Saturday morning, we pulled over and plugged the hot sensor back in.  We now found out that the power bleed method was no longer working to clear codes, but we had a code reader installed during the whole event and resorted to using that to get us back on our way to stage 10.  KP to Ollie was experiencing a big delay upon arrival.  We were told that Fetela was off near the cattle guard and we would transit this stage too.  We made it past the first cattle guard and realized it must have been a bit further down, at the jump.  When we made it to the jump, we saw lots of flashing lights.  Upon seeing how far down the road Piotr’s car was, we just knew that it had rolled and rolled and rolled.  It was not a pretty sight.  We’re glad that both Piotr and Dominik are okay and that there were no serious injuries.

By the time we made it to stage 11, Cook Station Express, the rally had already been going for nearly two hours, and we had yet to do a stage.  The hot sensor was holding up, although we hadn’t had much of a chance to drive it hard.  About two-thirds of the way through Cook Station, there it went.  I coasted to a crawl, and eventually to a stop, and cleared the codes as a car went by.  After getting it running, we got right back on it and made it less than half a mile before it went off again.  I cleared the codes again and went lightly through the remainder of the stage.  Back at service, we moved the cold sensor to a warmer location to see if it would prefer a balmier climate.  We hardly made it through the control and had to leave the fuel depot in limp mode.  Once we were technically on the transit, I pulled over and Ole reconnected the hot sensor.  It was clear that we would just have to take it easy and stay out of high RPMs.  Unfortunately, with the power band on the EcoBoost, not running to the rev limiter means you’re wasting a lot of time.  The stock gearing will get you to 100 in third gear while second gets you to 65.  We made it through Crooked-er Truck Trail okay.  We didn’t lose power, but we weren’t very quick.  Overall, it was a decent time for what we were going through.  On Scotia, we worked a bit harder at keeping up on the momentum, but had to settle for a balance with safety.  We couldn’t go as fast into some of the corners as we would have liked, simply for not having any real power to carry us through if things got loose.  And then came my favorite, and most anticipated stage, Southern Loop.  Everyone seems to either love Southern or they hate it– fast and flowing, but very technical, and fairly rough with big dips, water crossings, hairpins, and a couple (deep) low water bridges.  It was epic.  We lost power once, which cost us a minimum of 30 seconds, and we were still running in too-high a gear, but it was a good time for the stage even so.  On our way through, we noticed Cunningham’s Fit off past one of the low water bridges, putting us third in B-Spec.

At the last service, the car was left just as it was.  We set out on the last leg, identical to the one before.  I pushed a little harder on the second runnings of CTT and Scotia, being careful to not throw a code.  Our second time through Southern Loop ended up needing lights.  We noted where on stage we had gotten a code the time before and made sure to take it back even more there this time through.  About two miles from the end of the stage, we saw the bottom of a car and an OK sign.  Driving by, it wasn’t identifiable, but I had a sinking feeling that I knew who it was.  When I asked Ole, he said it was a Subaru, but when we arrived at the MTC, I was asked “Where’s Rory?”

It was confirmation to me that the car we had encountered two miles from the finish was indeed the Yaris.  Legend has it that the words “Sweet Baby Craig Drew” were spoken as the car rolled.

Their crash moved us up to second in class.  Bittersweet, since it helps us for the season, and a great way to end after two days of issues, but an awful way to ‘win’ and yet still a perfect example of “that’s rally.” 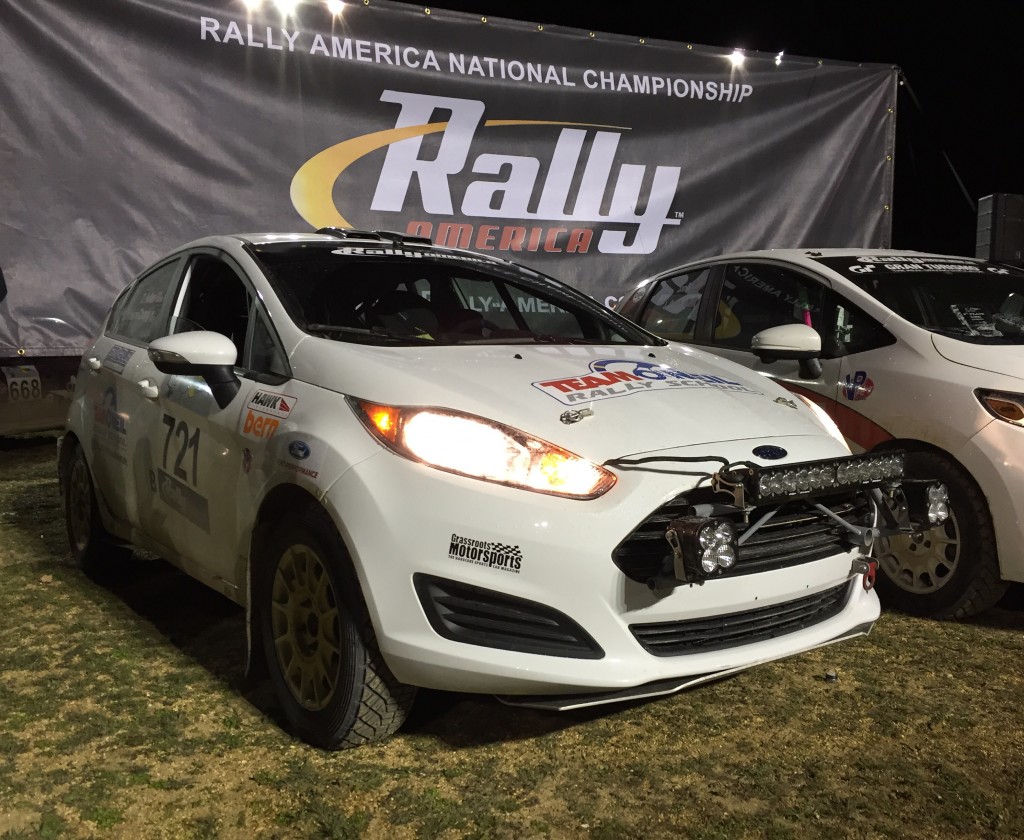 Funny enough, I spent the next few hours trying to figure out why my hair was crunchy, and it was 2:30 am before I realized it was the champagne. 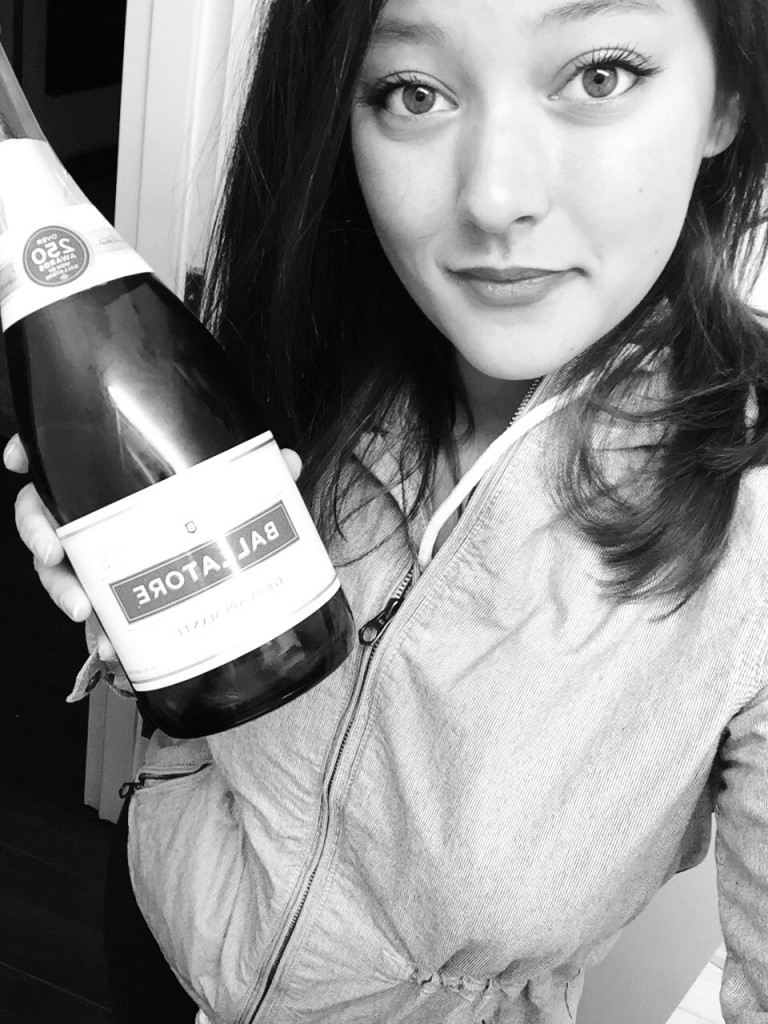 So, we’re now 2 for 2 (for 2) and looking forward to being back in the game at Oregon Trail! 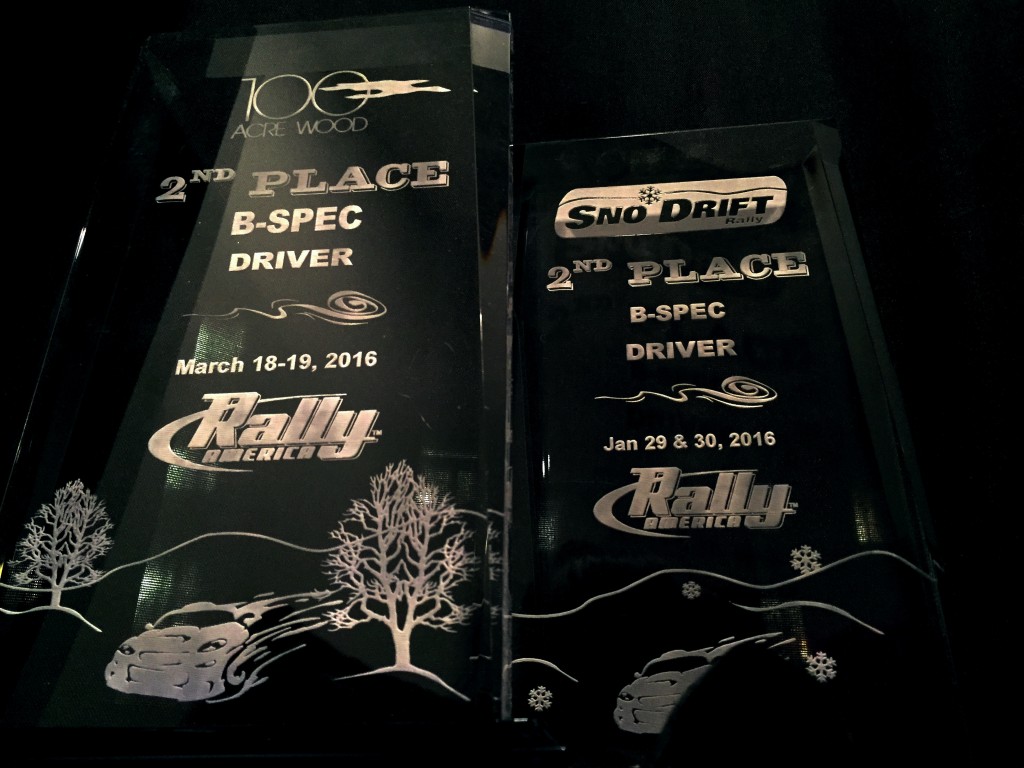