Champion rally driver Sandell, who is returning to rallycross for a second year after a successful debut season with Ford and Olsbergs MSE, will pilot the Kobalt Tools OMSE Ford Fiesta ST in the series, which opens May 17-18 in Barbados.

The Swedish driver said he’s excited to be back on the Ford factory team in 2014 with the backing of such strong partners.

“I’m excited to partner with Kobalt Tools in its first season of Red Bull Global Rallycross,” said Sandell. “Teaming up with Kobalt and Ford is a great honor and I think we will have a fantastic year together.”

“As Global Rallycross continues to grow and gain momentum, it’s a perfect time to get in front of our customers in a space where they’re passionate,” said Reggie Thomas, Kobalt director of brand management. “Kobalt Tools are known for being tough and standing up to any challenge. Teaming up with talent like Patrik and OMSE for our first year in GRC is a perfect fit.”

Rallycross is a tough sport and car-to-car contact is typical. Olsbergs MSE team technicians are equipped with Kobalt mechanics, hand and power tools to keep the team cars in top shape all year.

“We’re very excited to have Kobalt Tools with us on the team,” said Olsbergs MSE team owner Andreas Eriksson. “Having such a powerful motorsport brand join us demonstrates the growing presence of the sport of rallycross.”

Rallycross has swept into the motorsport scene since it debuted in the United States in 2010 with an event at X Games. The fast-paced events combine the energy and excitement of action sports with the values of motorsports and draw enthusiastic young audiences to a wide range of circuits built into major population centers. The 2014 Red Bull Global Rallycross calendar includes stops in New York, Charlotte, Los Angeles and Las Vegas. 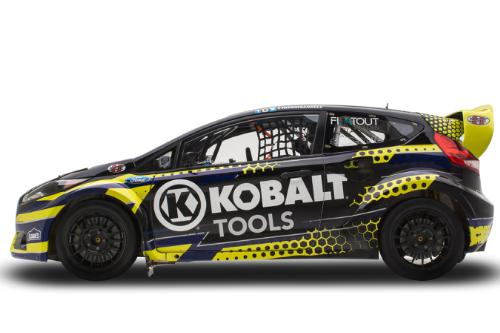 Joining Sandell on the team in 2014 is Joni Wiman, who will pilot the Red Bull/Bluebeam OMSE Ford Fiesta ST in the championship.

The Ford factory Olsbergs MSE Ford Fiesta rallycross SuperCars are class of the field at any race they enter. The powerful, 600-horsepower all-wheel drive machines are top performers that have scored countless wins and podiums at races around the world.

Olsbergs MSE is a Ford Racing technical partner, developing the Ford Fiesta platform for international competition. Together, Ford and OMSE have earned 19 X Games medals, including podium sweeps at the world’s leading action sports contest (Los Angeles, 2011; Brazil 2013). The team has also scored every Global Rallycross championship title since the series debut in 2011, and its drivers are podium regulars in overseas competition. In 2014, several additional teams will campaign Olsbergs MSE built Ford Fiestas in the Red Bull Global Rallycross series.

The 10-round Red Bull Global Rallycross Championship opens at Top Gear Festival Barbados May 17 and 18 at the newly renovated Bushy Park Circuit. Olsbergs MSE drivers Sandell and Wiman are among the favorites for the podium.