I am not here to question the morality of what Volkswagen did or why. Such questions are for philosophers and the religious and I am neither. I do however disagree with how the impact of the diesel emissions is being presented. Its important to note that emissions regulations do exisit for a reason and they work. However, when events like these hit the news, its blown out of proportion.

The EPA’s authority does not extend beyond the borders of the United States making this a moot point. Frankly, the European emissions standards are far simpler to understand and in many ways are better suited. If the EU wants to investigate for misrepresentation, fine, but I’m pretty sure they should worry about that whole refugee crisis first. The rules here aren’t exactly peace and flower-power either, allowing for loopholes like increasing the wheelbase of the vehicle to allow for higher emissions capacity, and no one is going to accuse regulatory commissions of making educated decisions. To make matters worse, we already do not receive various diesel models from many manufactures due to our regulations despite their legitimately good fuel consumption. Seriously, I want a 550d, but I digress…

#2 “…the extra emissions are hazardous to our health!”

Not quite. Let’s say its a perfect world and no other manufactures misrepresent their emission testing. (Supposedly BMW is under scrutiny too now). Then consider that VW diesel engines make up a very small percentage of the total number of diesel engines on the road, then factor that many VW diesel engines are older than the year range in question. It is a very small percent. Your lungs aren’t going to fall out because of this. The total output of these small engines in a light car is minute relative to your neighbors lifted Duramax, or say, that Freightliner that hauling five more Freightliners. Then you always have ships, construction equipment, old school buses, and generators. These are modren engines we are talking about, so 40 times the limit for their classification not the same as 40 times the limit of what your 68 camaro did.

The reality of NOx emissions is that they are inversely proportional to PM emissions. Meaning that increasing combustion temperature removes PM, but increases NOx. Likewise, reducing the temperatures reduce NOx but increase PM. Enter the DEF systems we see today to lower the PM output by essentially burning the PM into nitrogen gas, water, and CO2. However, theoretical yields in chemistry are always messier than they seem and I have yet to see data on what products are produced and in what compositions. That said, this system makes sense and works quite well even though you need to pay for urea, and no your pee won’t work. Anyhow, that reaction is below:

The downside is, lowering the temperature means less efficiency which yields lower power, higher fuel consumption, and reduced operational lifespan. If I sat down to calculate the impact of the increased consumption from trying to meet the standards versus the benefits, I’m confident that it would be disappointing.

In the US, the regulations are the same for gas and diesel except for matter of sulfur content of fuel. In that case, its 50% less for diesel. However, the processes by which the engines function are completely different. Gasoline has the luxury of exploding when exposed to a spark. Gasoline is also quite volatile with compounds like toluene which are directly hazardous long before you get to push the skinny pedal and make squish, bang, boom. These VOCs also make their way out of the tailpipe and are the reason your fuel cap gets tested for sealing quality.

Diesel on the other hand needs high pressure and heat to combust. Modern technology has allowed injection pumps to perform quite well on matters of timing and mixture, although at the expense of reliability, but hasn’t change the basic process. Diesel fuel burns in excess oxygen such that carbon monoxide (CO) emissions are essentially nil.  The CO with oxygen (and heat) rapidly converts to CO2. Gasoline however lacks this lean condition and produces considerable more CO which then must be handled by the catalytic converter. Even then, the tailpipe gases can’t compete with the diesels output.

I won’t even start with the renewable methods of diesel for biofuels over gasoline production.

All that said, I have actually measured and compared the CO emissions of a diesel and gasoline engine by infrared spectroscopy. By diesel, I specifically mean my 1987 300D that has no EGR, no catalytic converter, and about 367,000 miles. By Honda Civic, I mean a 1997, passes California smog, model of efficiency. By spectroscopy, I mean a fancy laser beam. To be clear, both NOx and CO contribute to the smog formation but CO doesn’t irritate the lungs, it kills you dead. In low concentrations its actually an extracellular signaling molecule, but if you were to run your car in the living room, the CO levels would be sufficient to bind to hemoglobin and cause asphyxiation. 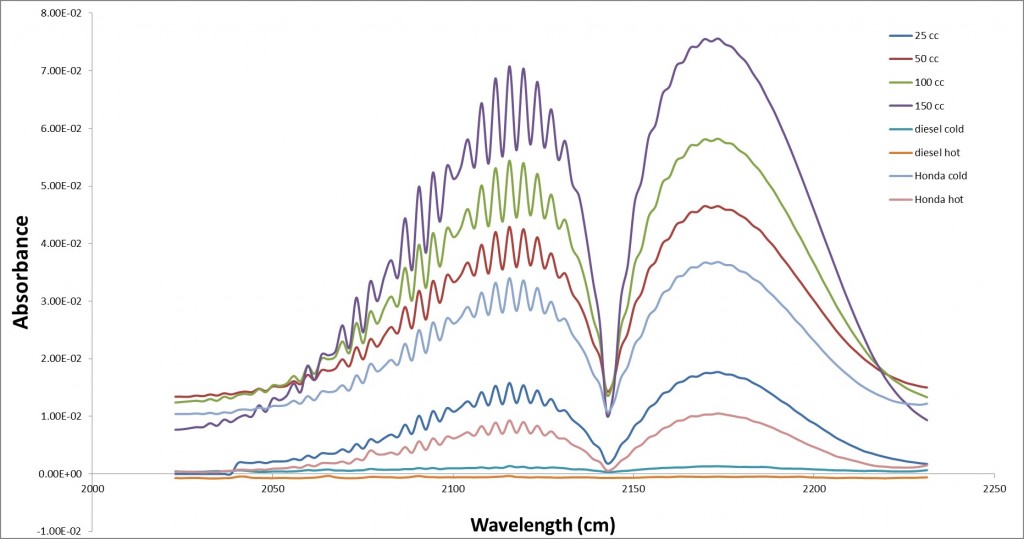 The absorption by CO for the diesel, both hot and cold, were below the limits of detection by the parameters of the experiment. Final calculations in percent composition were negative indicting values below the background CO concentrations. Yes, the exhaust had less CO than the air of the room I was working in. These results were to be expected due to the lean combustion conditions that diesel motors operate where the excess oxygen yield nearly complete conversion to CO2. Emissions from diesel engines are typically concerned with particle matter (PM) and NOx species productions as there are few volatile organic compounds (VOCs) and CO produced. Particle matter is produced by the heterogeneous combustion conditions in the cylinder. The high pressures and temperature can cause pyrolysis of the fuel before it combustion with oxygen yielding soot. Gasoline engine combustion differs considerably with substantial levels of CO, NOx, and VOCs produced, but little PM. (1)

You can bet there are far more non-catalytic, carbureted, gasoline powered cars running around than there have ever been diesel VW models sold in the states. Meaning you can’t be outraged about the emissions of the VW and not about everything else out there. However, VW has shot themselves in the foot and likely the feet of every other passenger car diesel producer. There are some VW diehards who will not be phased but the average consumer will be turned away from TDI models, even if VW manages to legally meet the rules and retain the fuel economy. Furthermore, it will drag down sales other makes and models with diesel engines. I don’t foresee the trucks getting a ding in public image since they are ingrained in Americana, but its likely VW’s illdecision has ruined diesel car sales in the states. At least for a few years.

So what will this mean for the diesel car in the US? We shall see. Will you die? No.