“The starts were the critical factor for me here,” said Foust. “It can be very difficult to make a pass on a tight rallycross course and getting out front early and staying out of trouble is key to winning.”

Foust also credits the Volkswagen Andretti Rallycross team with nailing the car set-up to handle the New York course. The six-turn, half-mile track layout featured five right-handers and only one left. Foust and Volkswagen teammate Scott Speed were fast and confident while many other drivers struggled to get the most out of their competition cars as uneven tire wear became a factor.

“We were fastest in opening practices and stayed up front all weekend long,” said Foust. “Having a car that was ready to win from the moment we hit the ground here in New York shows the advantage of working with a team like Andretti.”

Foust opened the weekend as one of only four drivers to break through the 30-second mark in qualifying and achieve a lap time in the 20s. In heat racing, he found his stride in the second round, blazing off the line to lead wire-to-wire in his Rockstar Energy Drink Volkswagen Polo. He took another lights-to-flag victory in the Semifinal round to earn a front-row starting position in the 10-car Final.

Starting from the middle of the front row, Foust kept his cool through two red-flag restarts as other drivers tangled on the course. When the abbreviated six-lap Final got underway, he was off the line first and never looked back as drivers jostled for position behind him. Although teammate Speed passed nearly half the field on the way to a second-place finish, he was demoted to ninth on a penalty assessed during the first red-flagged race. Nelson Piquet Jr. and Ken Block claimed second and third.

A regular top finisher, Foust has earned a podium in more than half of his Global Rallycross Championship starts since the series began in 2011. 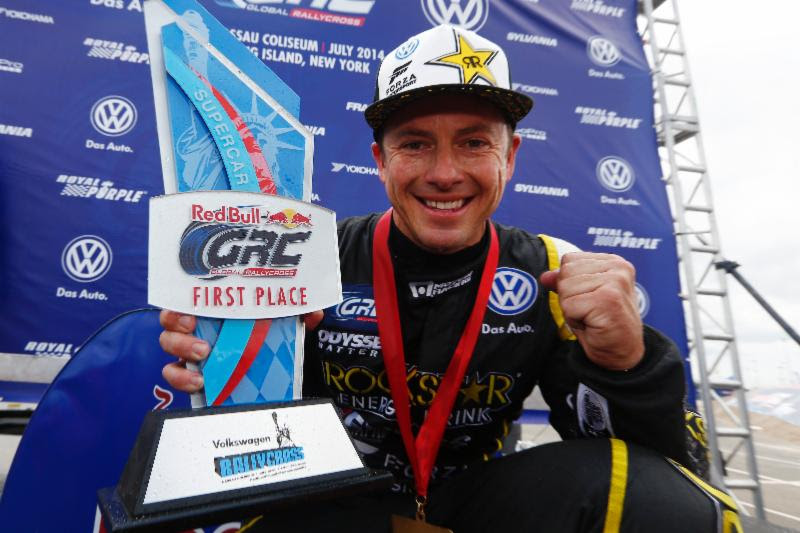 “This year, the speed has been there but the results haven’t,” said Foust. “It’s nice to get this monkey off my back this season and earn a win in GRC. It feels like I’m headed in the right direction now.”

The Volkswagen Rallycross New York win was the second rallycross victory for Foust in less than a month. He also stood atop the World RX podium in Finland three weeks ago. The driver is making a full campaign on the Global Rallycross Championship in 2014, along with a partial season of guest appearances in the World RX series.

Foust and the Volkswagen Andretti Rallycross team will bring the Rockstar Energy Drink Volkswagen Polo back to Global Rallycross competition in just a week’s time for Round 5 at the dirt track at Charlotte Motor Speedway, July 25-26.