Skateboard legend and burgeoning Subaru rallycross driver Bucky Lasek drove fast and smart while overcoming the Florida heat to finish in third place at this weekend’s Red Bull Global Rallycross round at Daytona International Speedway. The podium finish is Lasek’s second this season at the wheel of his Vermont SportsCar-prepared 2014 Subaru WRX STI rallycross car after earning a Silver medal at X Games Austin in June. Lasek’s Subaru teammate Sverre Isachsen made it two Subaru’s in the top-five after battling from the back row of the grid in the final to finish fifth overall. The result marked the second podium in a row for Subaru Rally Team USA and their third this season after six rounds. 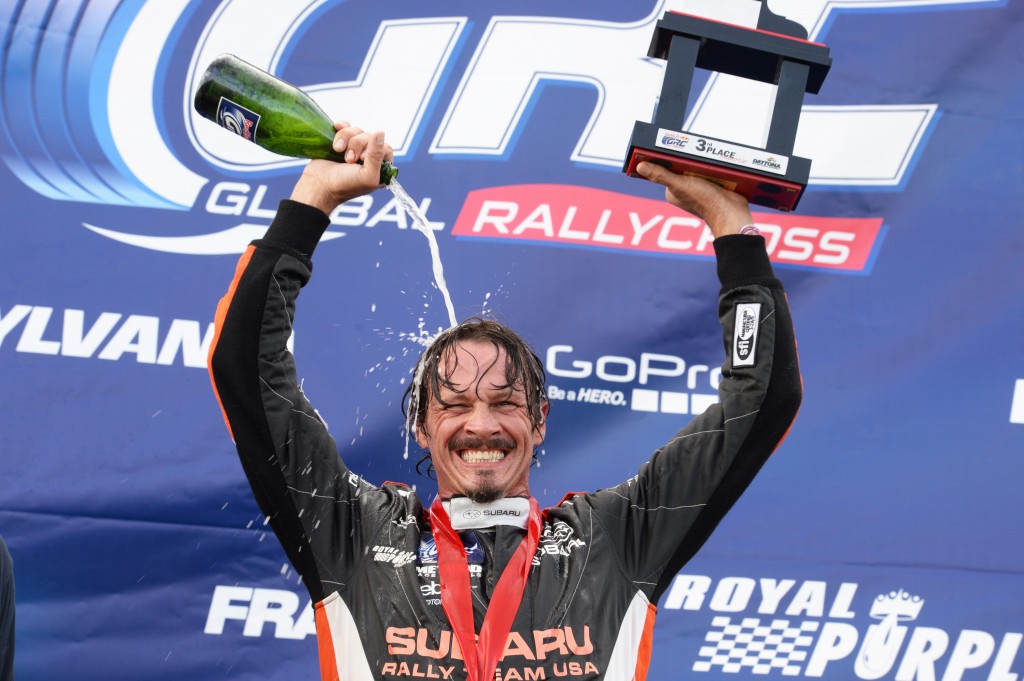 The biggest story of the event was the high temperatures in Daytona, Florida, which proved a huge challenge for the drivers as well as their cars. Engineers at Subaru Rally Team USA made several technical changes to help the team’s competition cars cope and ultimately excel in the high temperatures. Hosted at the famed Daytona International Speedway, the purpose built track proved to be a hefty challenge to rallycross teams. The purpose-built dirt and asphalt track, nearly a mile in length, was almost double that of a typical GRC course. 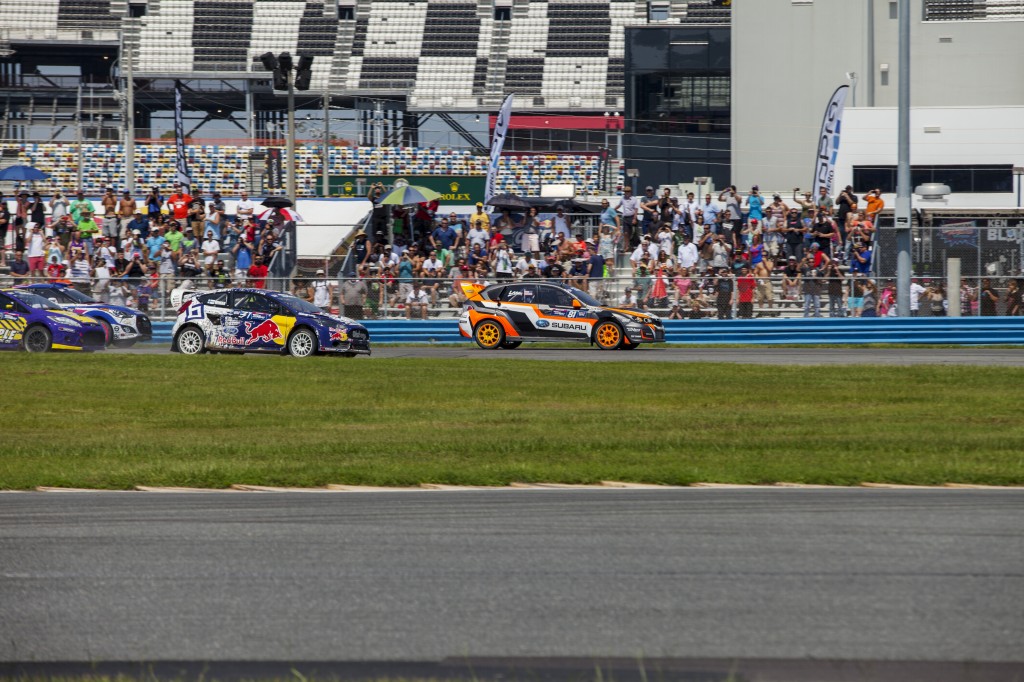 Lasek’s pace accelerated throughout the event as he adapted his driving style to the course during practice and qualifying. A second place result in his semi-final vaulted Lasek to a front row starting position in the final. In the final Bucky drove smartly and timed his use of the short-cut joker lap to move into third overall where he then battled to keep the position with former Global Rallycross champion Tanner Foust. Lasek prevailed and finished third-overall, taking his second podium of the year. 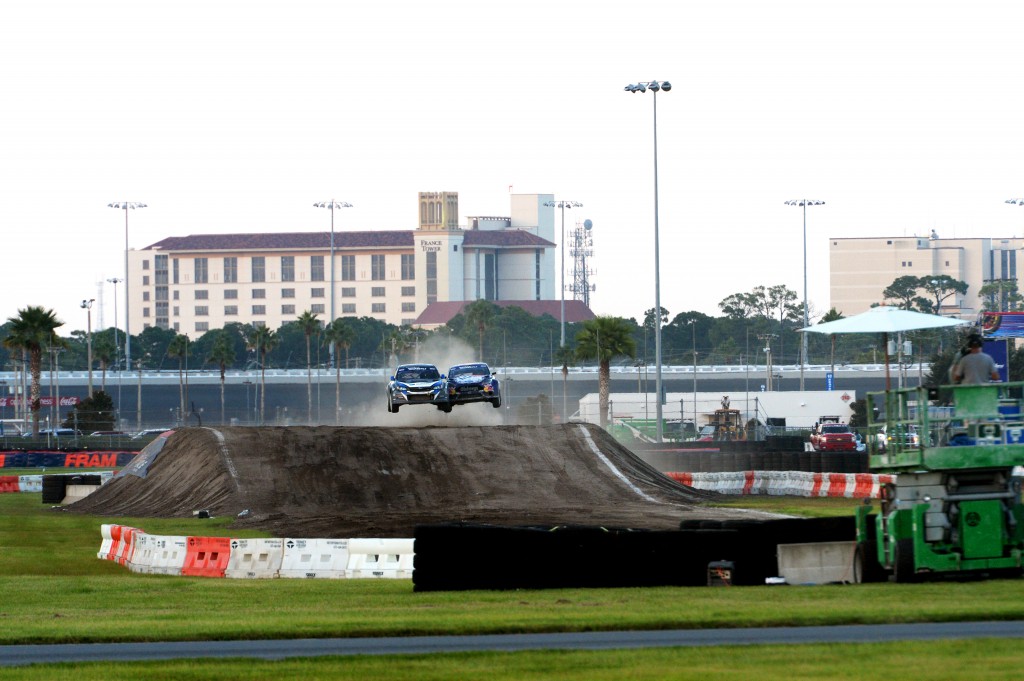 Sverre Isachsen had a poor launch off the start line in his semi-final and was unable to earn a transfer spot to the final there. He then put in a strong performance in the last chance qualifier to transfer to the final, but would start from the back of 10-car grid. Isachsen worked his way through the field in the chaotic final to reach fifth overall. “Two cars in the top five is good, so I’m happy,” said Isachsen. “It was difficult event at times but I’m glad I was able to have a good result in the final. That’s two podiums in a row for the team so our confidence is high, it is very good and it’s only going to get better.” 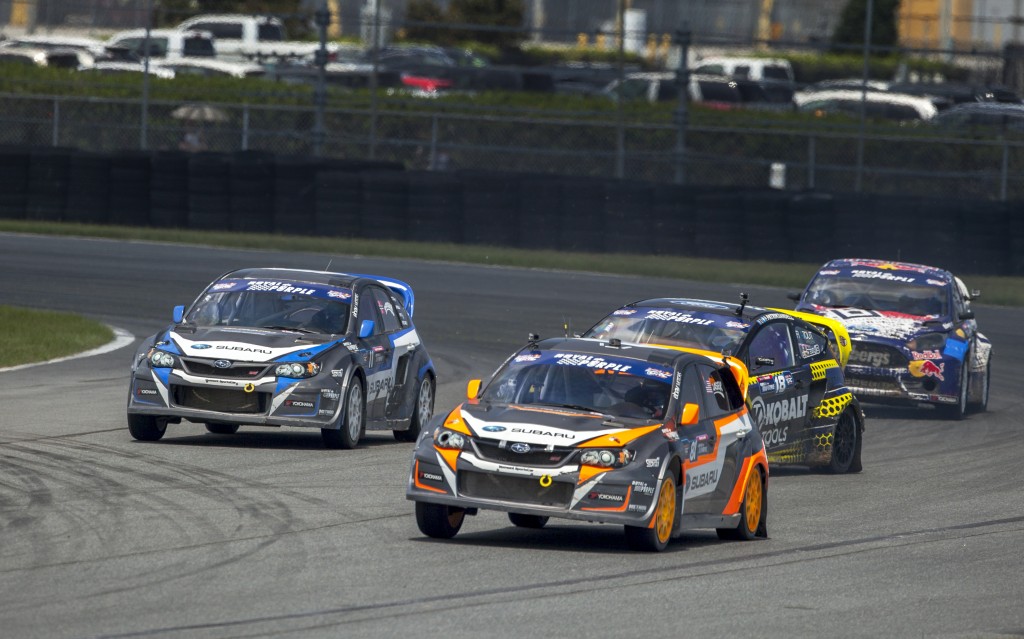 “It’s awesome to see Subaru get on the podium just about every race now, and we’re fighting for wins now. So hats off to my team, I love them, and also my friends and family for their help and support,” said Lasek. “Daytona was awesome—a fun track, really fast, that really showed what these cars are capable of. It was awesome to just battle clean, take some good lines, and these guys are top notch. So to be able to race with these guys and be competitive is an honor.”

“It’s becoming regular to see the Subaru WRX STI in the front row of the final and on the Red Bull GRC podium,” stated Rob Weir, Subaru Motorsports Marketing Manager. “Our consistency to fight at the front has come from the hard work of our drivers and development efforts from our technical partner Vermont SportsCar. Claiming another podium and placing both Subaru Rally Team USA cars in the top five is very encouraging to our program.”