ESPN’s X Games Austin hosted the second round on the Red Bull GRC’s 2015 schedule, which saw 15 drivers competing for an X Games gold medal in an invitational, non-points format. X Games Austin marked the return of horrible announcing by Toby Moody, as Scott Speed earned the top spot of the podium as he secured the gold medal for the Volkswagen Andretti Rallycross squad in the main event.

Speed, who qualified on the pole for the event and also won his heat, held off Chip Ganassi Racing’s Steve Arpin and Olsbergs MSE’s Sebastian Eriksson for the medal. “We were on plan D—plans, A, B, and C went out the window after lap one!” Speed said after the event. “What a great race. This is, by far, the best medal I’ve won.  The first one was great because it was my first X Games and I made a last-lap pass, but I’m sure the in-car footage of this one is going to be a lot more exciting!” 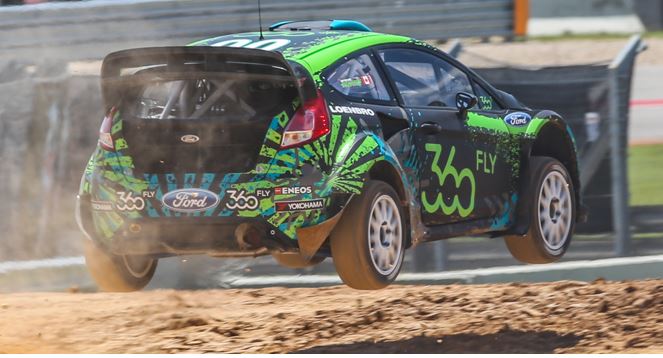 Canadian, Steve Arpin, earned a runner-up finish for Chip Ganassi Racing, in its first appearance at X Games Austin, conquering the .562-mile Circuit of the Americas course after taking the final transfer spot in the last chance qualifier. “These guys gave me such an incredible car!” Arpin exclaimed after the race. “It just drove. We made a last-minute decision in the main just to back up and let the stuff in front sort itself out, and we just have such a good car that if we get on clean racetracks and stay out of the carnage, I knew we could get to the front.” 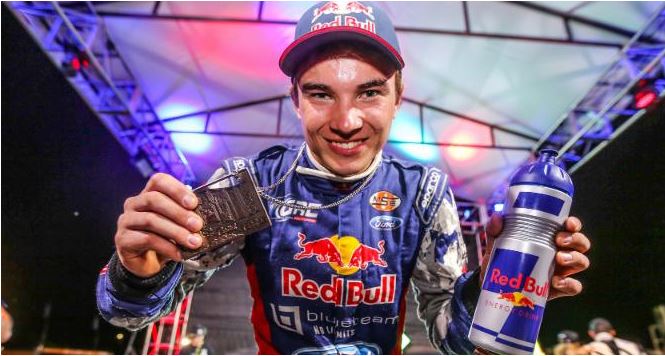 Olsbergs MSE rookie Sebastian Eriksson put in an amazing performance to score X Games bronze in his Red Bull/Bluebeam Ford Fiesta ST this weekend. After getting off the line with a great start in the Final, Eriksson took the lead for the first four laps, until a flat left-rear tire caused him to slow. “I was just thinking I just had to keep it tight and not let everyone past,” said Eriksson at the finish. “It was close. I almost spun in that last right-hander.”

Red Bull GRC’s 2015 Round one winner in Ft. Lauderdale, Ken Block, saw his weekend come to an early and frustrating end following the first heat race of the event.  Bad luck struck for the second year in a row as Block held a solid second place in heat 1.. On the final lap with the checkered flag in sight, a sudden driveline issue developed, causing all 600hp to immediately hit the rear wheels in the middle of the final corner, causing a BIG spin and eventual elimination from the event. 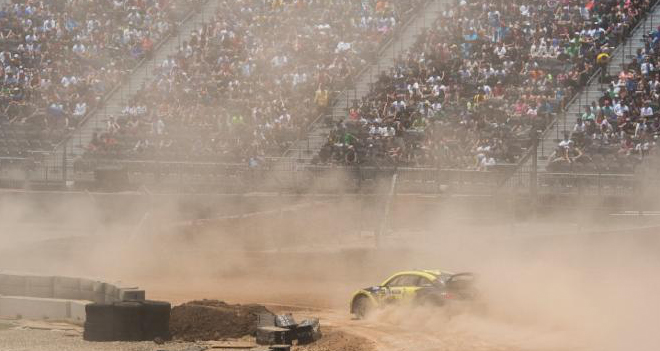 Four-time gold medalist, Tanner Foust, qualified the Rockstar Energy Drink Volkswagen Beetle second and showed a strong pace as he fought his way into the main event. In the final, Foust lined up in the second row, prepared to battle for a medal. But as the lights went out and the field charged into the dusty first corner, a car crossed directly in front of his bumper, causing Foust to maneuver off-line to avoid a crash.  Foust was able to regain the course but had to settle for a fifth-place result.  “I couldn’t see anything so I took a guess about how much steering angle I needed,” said Foust. “Until I hit the tires on the outside, I didn’t even know where I was on the track.”

It was a less than ideal weekend for 19 time skateboarding medalist Bucky Lasek at X Games Austin 2015, coming up short in both his skateboarding and rallycross events. After missing Rallycross practice due to bad scheduling on the part of the event coordinators, which saw skateboard vert finals and Rallycross practice take place at the same time. Lasek was forced to start from the rear of the field for qualifying, as practice times were used to set the grid locations. “It put me in the back of the pack behind slower traffic which blew my chances of a good result” he stated following the event.

Joni Wiman, teammate to Eriksson, was not as fortunate this weekend in Austin, as the defending Red Bull Global Rallycross champion had a spectacular crash off the jump in blinding dust. “I was knocked off line and was just guessing where the jump was,” said Wiman. “I went for it but when the dust settled down and I could see it wasn’t right, I was already in the air and there wasn’t anything I could do.”

The Red Bull GRC season resumes on June 19-21 with a doubleheader round at Daytona International Speedway. Build Race Party will be on hand to provide all the insight and behind the scenes action.