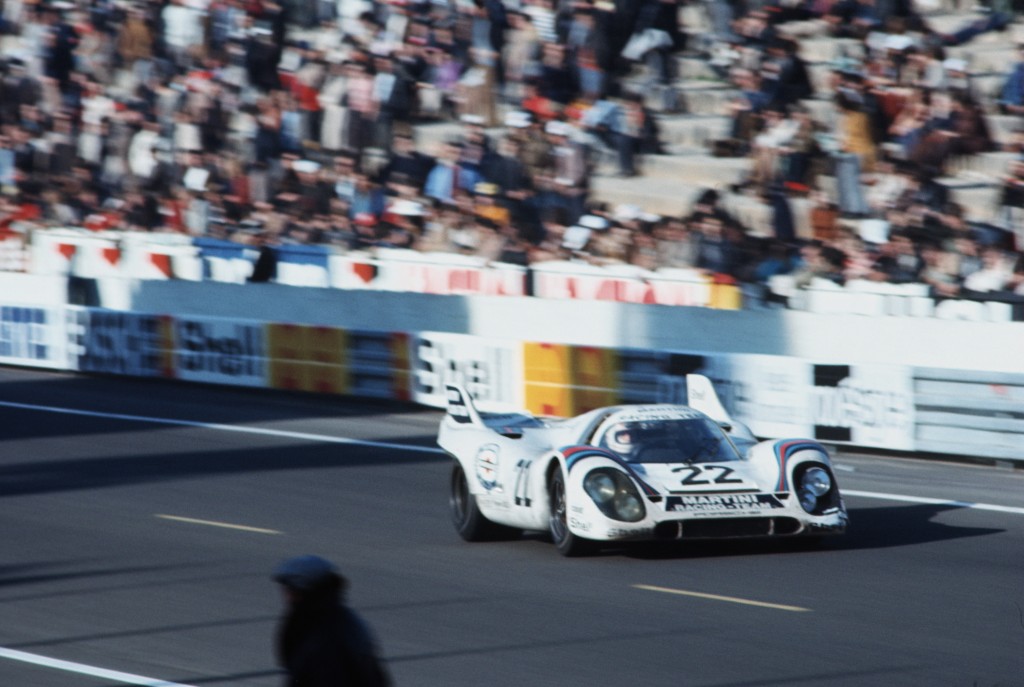 With the banning of the awesome 917s at the end of 1971, Porsche sought new challenges across the Atlantic in the spectacular CanAm series for 1972; and proceeded to decimate the opposition with the 1,000 hp+ turbocharged 917/10. 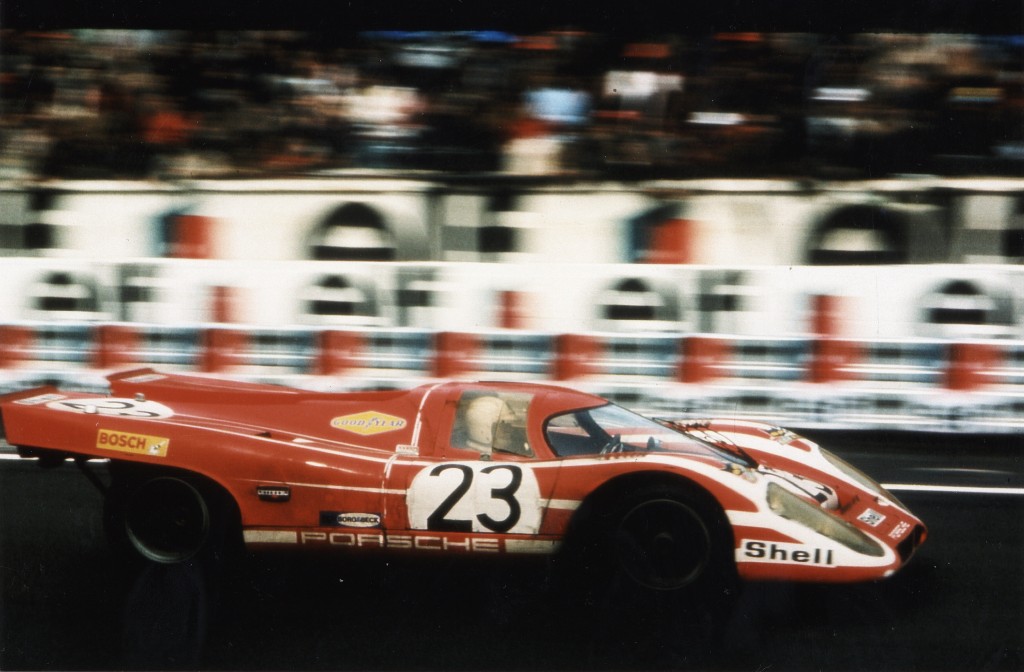 At Le Mans, the 911 ST had reached the limit of its development in the GT class, but even so, Porsche still had a tremendous presence in the race, scoring its now customary class win via an armada of privately entered 911s. New Porsches, however, were on the horizon.

From 1973, the 911 became the principle thrust of Porsche’s motorsport activity under new company boss Ernst Fuhrmann. Two distinctive, Martini-liveried 911 RSR 3.0 ‘prototypes’ were entered for Le Mans in ‘73, where they seemed to have little chance of a decent result against the might of pure racing car opposition from Matra and Ferrari. Nevertheless, Gijs Van Lennep and Herbert Müller achieved exactly that, thrashing the RSR mercilessly for 24 hours until at the flag they finished an extraordinary fourth overall. Behind them an armada of new 2.8 RSRs overran the GT class, validating further Fuhrmann’s new road car-based approach.

For 1974, the works’ activities diverged further from those of its customers. The latter adopted en masse the new 3.0 Carrera RSR, based in turn on the newly introduced G-Series 911. Even in the glittering history of Porsche’s customer racers the 3.0 RSR holds a special place, storming to GT class wins at Le Mans in both 1974 and 1975. But could Porsche take the 911 one stage further and build a race winner?

That quest began in 1974. After the exploits of the previous year, Porsche decided to enter a prototype 911 with Turbo power. To stand even the slightest chance of competing against the outright sports car opposition – in effect F1 cars with closed bodywork – engineer Norbert Singer and his team shaved as much weight as possible from the car, embraced massive aerodynamic wings and, adapting lessons learnt in the CanAm, introduced turbocharging; 500 hp was the result, even though the engine had a capacity of only 2.1-litres thanks to the equivalency regulations applied to forced induction engines. With nearly 190 mph possible on the Mulsanne straight, the Turbo RSR was a 911 with a whole new level of performance. In the race, it ran like a train, scooping an improbable second overall. The era of the Porsche Turbo had arrived. 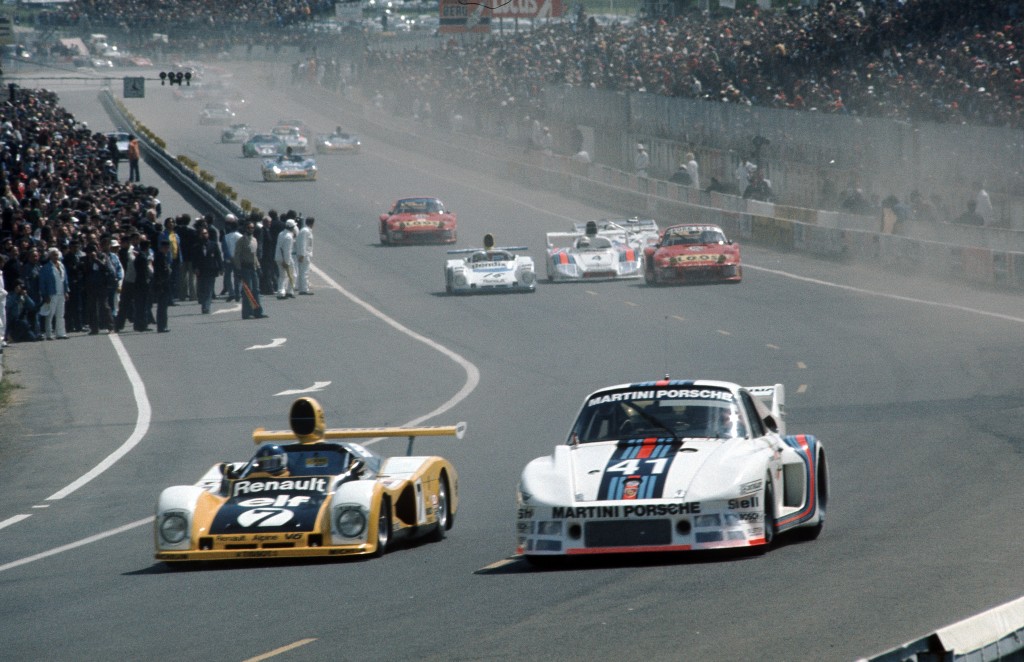 The year 1976 brought three new racing Porsches to Le Mans. The 934 was a turbocharged 911 for Porsche customers in the GT class; the 935 was a more exotic, 911-based turbo car for the Group 5 World Championship of Makes, and the spyder-bodied 936, as the name implied, was for the Group 6 World Sports Car Championship – and principally for gaining overall victory at Le Mans. The big, white 935, with its beautiful Martini livery, ran home 4th overall and Gr.5 victor, but it was the elegant new 936 that won the race: Jacky Ickx and Van Lennep leading by as much as 17 laps at one point. It was Ickx’s first win for Porsche, and the beginning of a partnership that would write motorsport history. 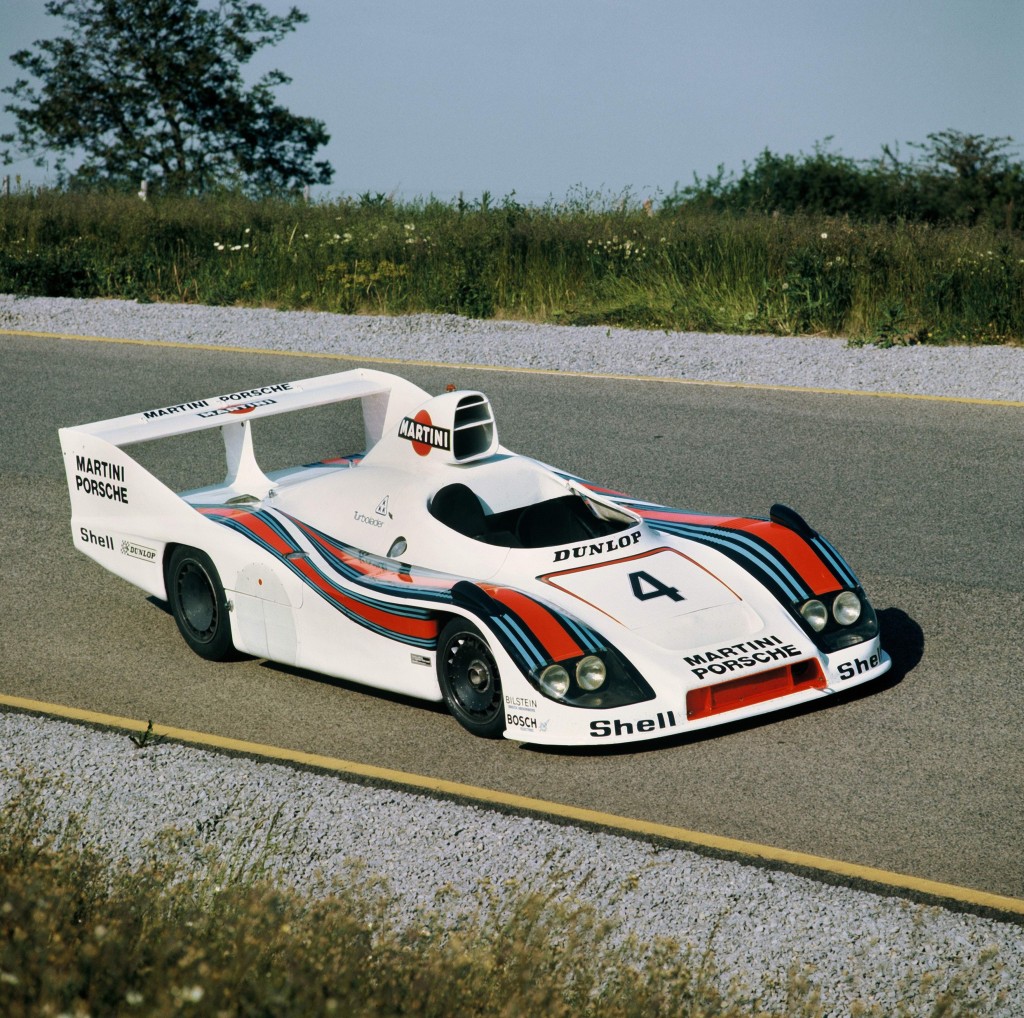 For 1977 the turbocharged Porsches returned, this time ranged against significant opposition from Alpine-Renault. The 936/77s now featured twin-turbocharged engines with 540 hp and a 217 mph speed, and the race unfolded like a Hollywood film script. Ickx’s car hit problems early on, and he was transferred to the sister 936 that had also been delayed near the start. He was 15th, nine laps behind the leading Renault. Driving for up to four hours at a time, he set a scorching pace through the night, clawing his way up the leaderboard and losing significant body mass due to the extreme effort required. Finally he hit the front, only for the Porsche to falter in the final hour, but car and driver clung on to take a most famous victory.

1978 saw the 936s narrowly miss taking a hat trick in another closely fought race, but it was also notable for the appearance of the 900 hp 935/78 – or ‘Moby Dick’: the most spectacular racing 911 ever to leave the factory gates. The big Martini whale was delayed by small problems in the race, but not before leaving an incredible 227 mph marker on the straight: its four-valve, water-cooled heads were the first step in the evolutionary road that has led to the current range of engines in the German company’s road cars. 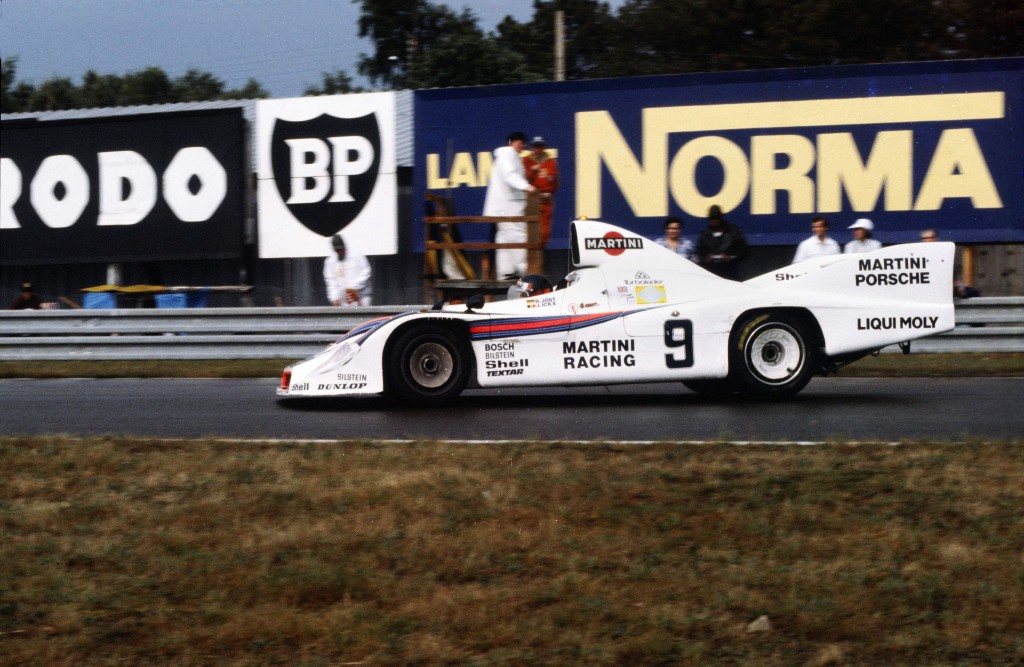 In the end, it was a Porsche customer that gave the 911 an outright victory at Le Mans: the Kremer brothers, long time Porsche stalwarts, took overall victory in 1979 with their 935 K3. But the 936 had one last hurrah: when new boss Peter Schutz asked his engineers if Porsche could win outright in 1981, he was told it would be impossible with the team’s entries that year, all based on the 924 coupe. In fact, the 924 GTP had scored an admirable 6th/12th/13th finish the previous year, and the little coupes would be back for 81’ in both production GTR and experimental 16-valve 2.5-litre LM form, the latter (a forerunner of the 944 road car) finishing 7th overall and winning the ‘least time spent in the pits’ prize. It was another classic case of Porsche efficiency, extracting the upmost from a small engine, but Schutz had wanted more, and in a blur a pair of 936s were taken from the Porsche museum and fitted with an endurance specification version of a new 2.6-litre flat-six originally designed for Indycar racing. With water-cooled heads and twin turbochargers, this was an engine that would come to define Porsche racing in the 1980s and beyond. As it was, Le Mans 1981 was one of the easiest victories ever achieved by the works team, with Ickx and new driving partner Derek Bell cruising unopposed to the win in their 936. 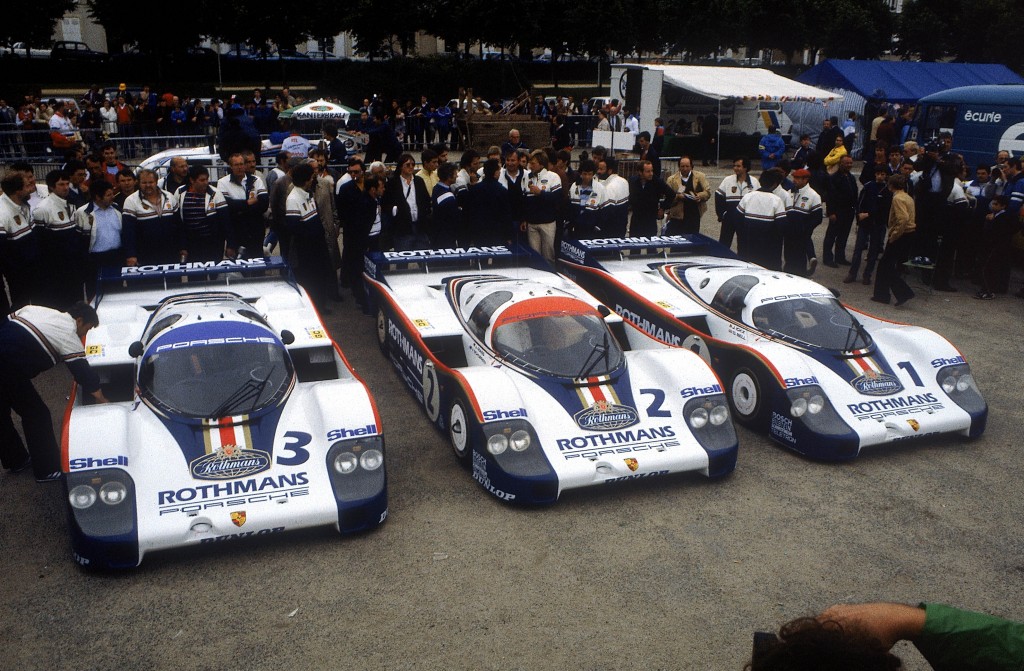 1982 brought the Group C formula, and Porsche was ready with a new car that would in time become a legend of the sport: the 956. Incorporating monocoque construction and ground-effect aerodynamics, as well as the ‘Indy’ engine from the last 936, this was a 240 mph car at Le Mans with near-mythical reliability. 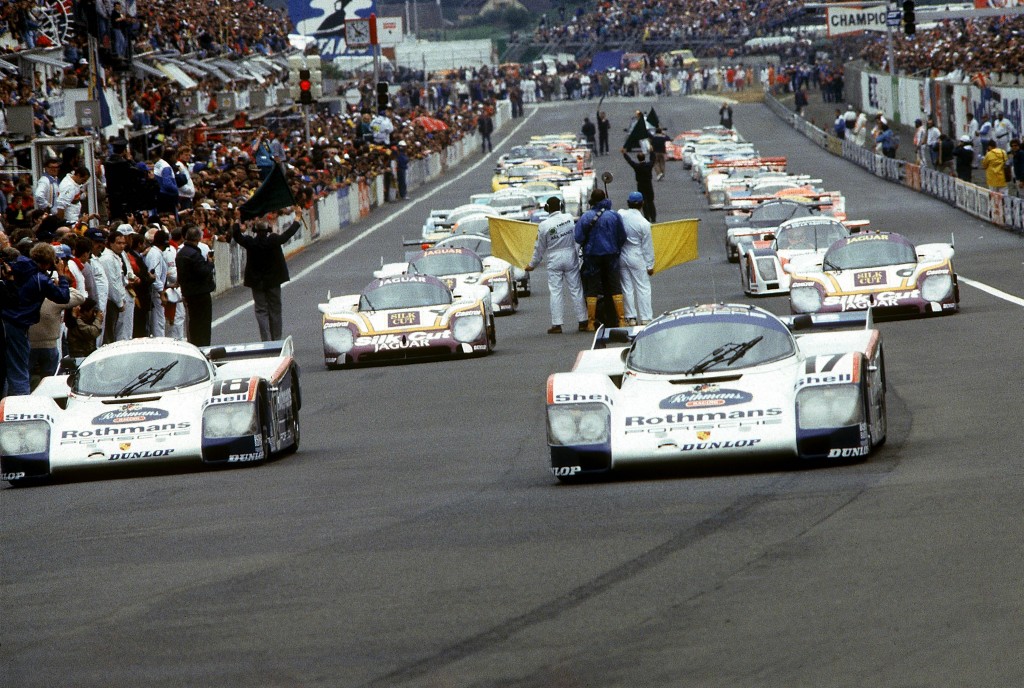 It was a golden recipe: so convincing was the 956’s superiority (and its later relation, the 962c), that it took consecutive victories from 1982 to 1987, narrowly missing out on victory in 1988 and leading for part of the 1989 before retiring. Even in 1991, a 962c driven by a privateer team came third overall; in 1994, prepared under road-car GT rules as a Dauer 962, the car won overall again, and the 962c’s flat-six engine installed in a prototype chassis scored further overall victories in 1996 and 1997. 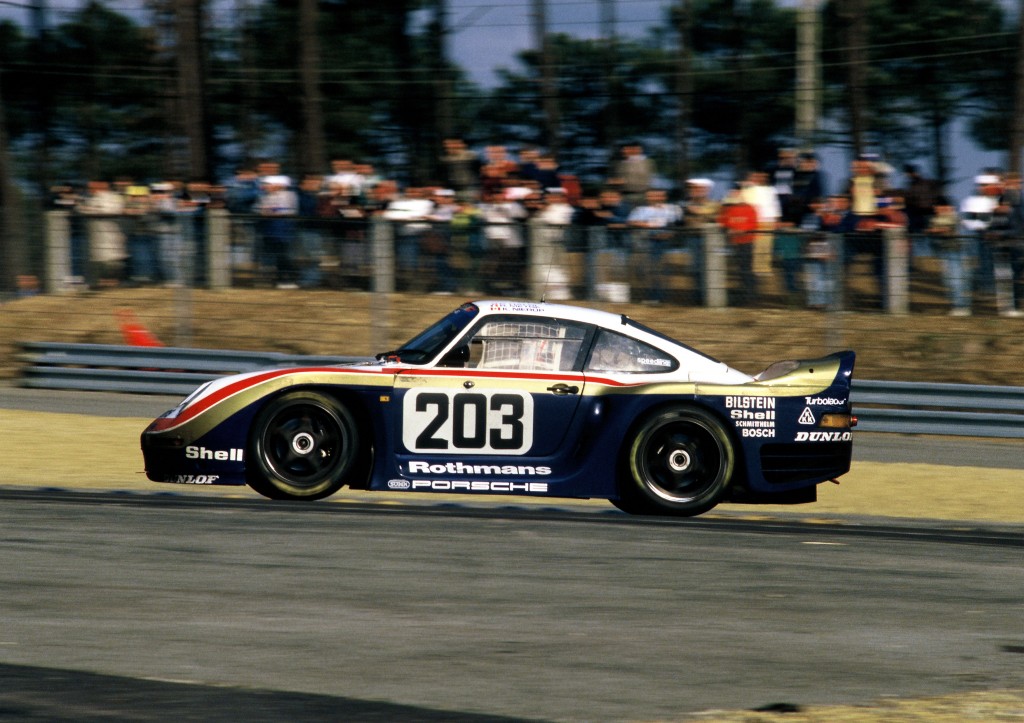 Porsche had built a new car for the FIA GT Championship in 1996; the 911 GT1 was a mid-engined supercar powered by a new water-cooled flat-six, but narrowly missed taking overall victory in both ’96 and ’97. For 1998 a heavily revised version – the GT1/98 – did achieve Porsche’s 16th overall victory – its last to date – with Allan McNish, Stephane Ortelli and Laurent Aiello at the ‘wheel. 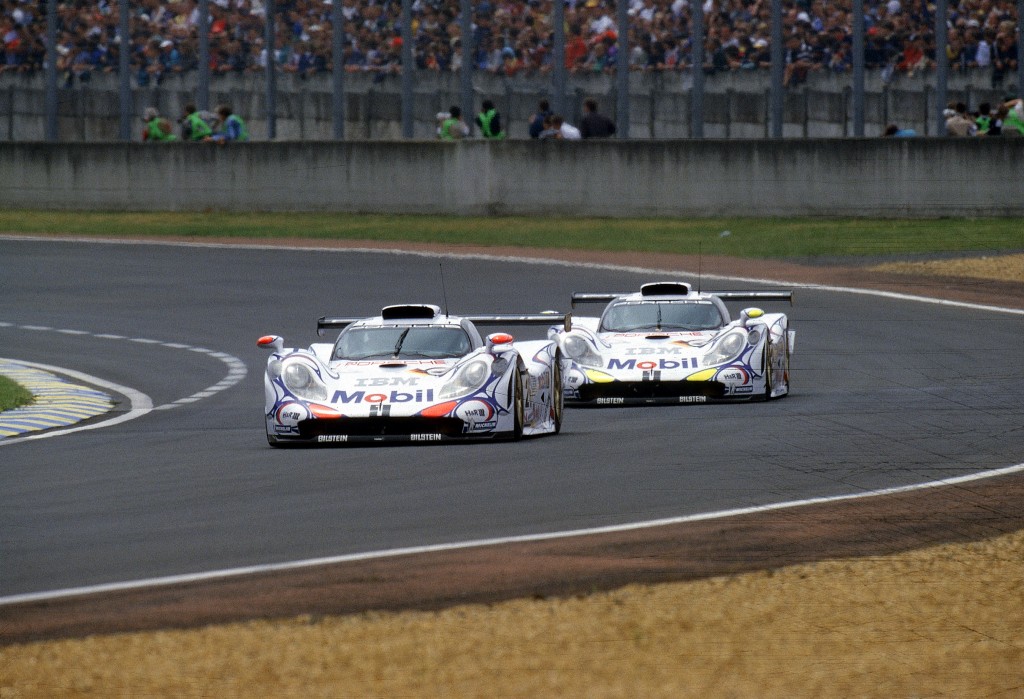 Porsche then changed direction again to commence another new era. It wouldn’t be contending for outright victory, but it was the turn of the road-based 911 to once again shine at Le Sarthe. On the grid for 1999 were a pair of new 996 GT3-Rs, with the Manthey-entered car eventually finishing 13th overall and first in the GT class. It was the opening salvo for a glorious 14-years-and-counting of GT class victories, through successive developments of the 996 and 997, gained via homologation of the 911 GT3 road car. With GTE-class victory last year for the new 991 RSR, and GTE-Am honours for a 997 GT3 RSR, the 911 is as competitive as its ever been. Now, in 2014, Porsche returns with the 919 Hybrid to once again contest for overall honours at the Circuit de la Sarthe. History alone suggests it will be a strong contender.

– The first 911 at Le Mans, in 1966, had already contested the Monte Carlo rally that same year

– The 908 made a surprising comeback in 1972: with the big 5-litre sports cars banned at the end of the previous season, the ’72 race ran to 3-litre prototype rules. A 908/01 LH, slightly updated aerodynamically, finished a remarkable third against the latest F1-engined Spyder opposition

– A 917 made an even more unusual comeback, appearing at the 1981 Le Mans 24-hours race just before the homologation of the type ran out. Despite updated aerodynamics it was hopelessly slow on the long straight

– The Martini Racing 4.5-litre 917 LH that came second in the 1970 race is forever known as the ‘Hippie’ car, on account of its green and purple psychedelic swirl paint job. The scheme was designed by Porsche’s styling chief of the period, Antony Lapine

– After the Group C era, the return of the factory to racing at Le Mans took place in 1993 with the very rare 911 Turbo S LM, a heavily turbocharged 964. It was fast, but accident damage led to retirement