The names of Auguste Veuillet and Edmond Mouche may not feature prominently in Porsche history at Le Mans, but they hold a special significance. 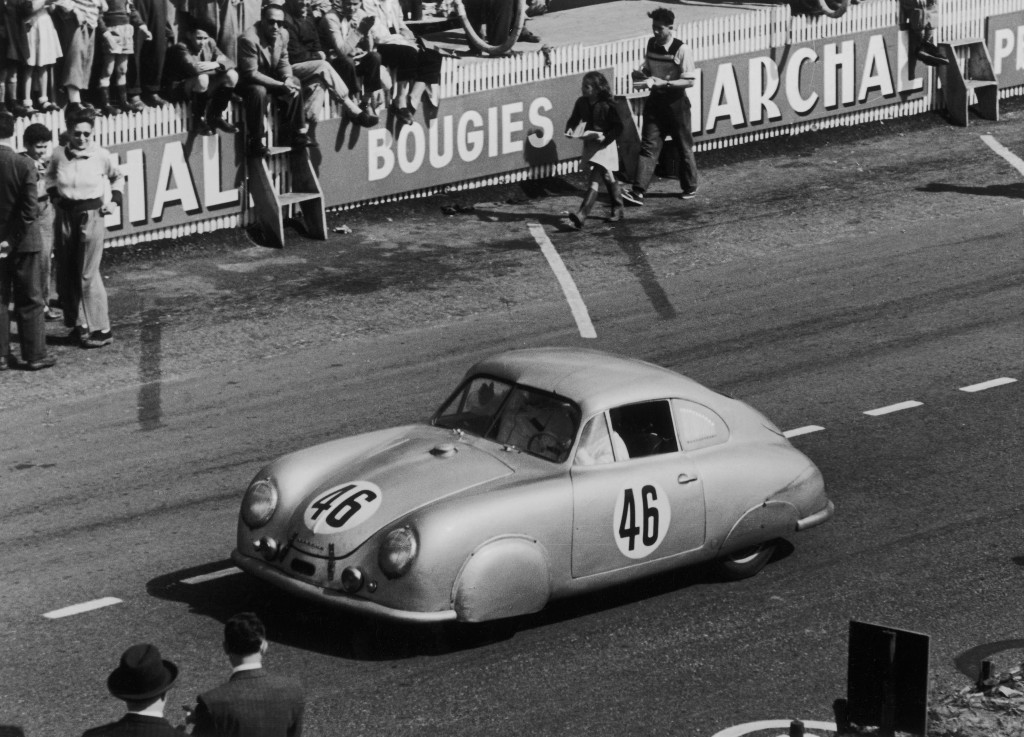 In 1951 Porsche received the great honour of an invitation to participate in the Le Mans 24 hours. The question of whether to go or not was a hefty decision. For the tiny company (Porsche had only built its first car as recently as 1948), the money and manpower absorbed by this grand undertaking was a heavy burden and yet, if things went well, the resultant publicity would surely add sparkle to the company’s already burgeoning reputation. Ferry Porsche knew it was a brave decision to go, but it could be done, and moreover – as he reflected later – “We found that through our work in racing we could make improvements in our normal cars”. Already, the heat of competition was forging the relentless development of the product.

Veuillet (whose Sonauto concern imported Porsches into France) and Mouche would drive an aluminium 356 (leftover from the company’s early days in Austria); lightened further it featured an 18-gallon fuel tank and measures to improve aerodynamics. The 1,086 cc engine was detuned slightly to 49 hp, in the interests of reliability, but 100 mph was possible on the 3.4-mile Mulsanne straight. After 24 hours and at an average speed of 73.6 mph, a class victory and 20th position overall was theirs. The first page in the sports car manufacturer’s extraordinary history at the Circuit de la Sarthe had been written. 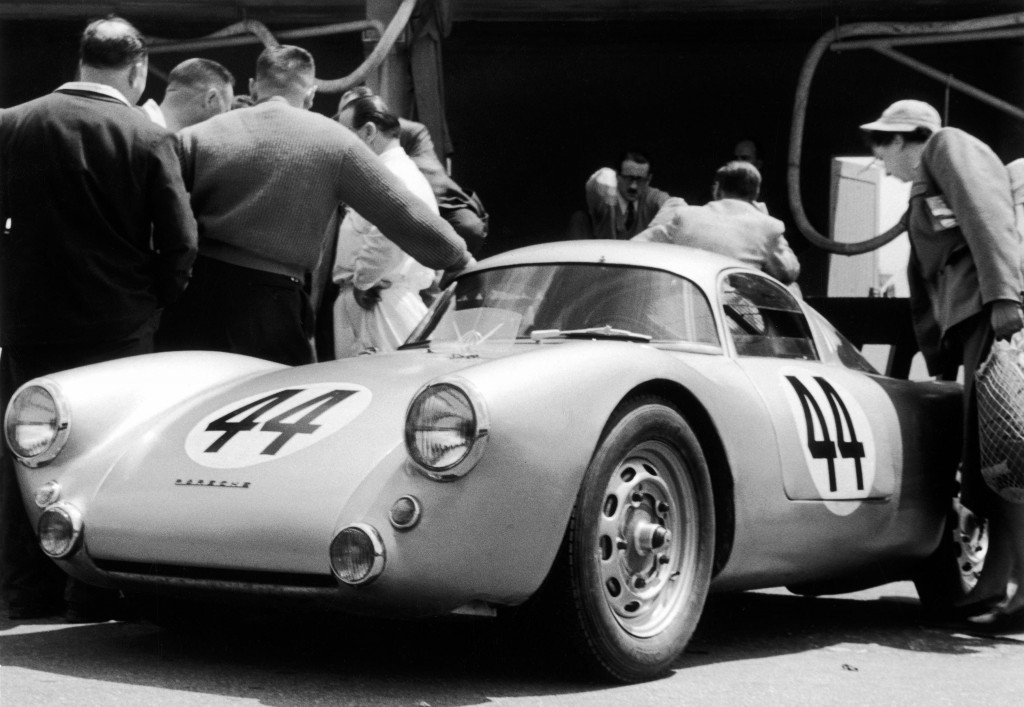 Porsche repeated the class win a year later with the same driving partnership, but for 1953, and facing mounting class opposition, Ferry knew he needed a dedicated racing car. The Porsche 550 was born.

Although the type would later be associated with the Spyder body style, these first 550s were coupes. The little mid-engined car featured a space-frame chassis and a race-tuned, 1,500cc, pushrod flat ‘four’: 124 mph was possible on the long, tree-lined straight thanks to 78 hp, and another class win followed.

The type 550 was developed further, with customer deliveries following in 1954. Porsche was now able to supply track-ready 356s, or 550s; by 1957 the RSK (a development of the 550) came home 4th overall, and a year later the Porsches were reaching 160 mph on the straight with their diminutive but sophisticated four-cam, flat-four engines. Memories of 1951 now seemed an age away.

Next came Butzi Porsche’s masterpiece, the gorgeous 904 Carrera GTS, which scooped seventh, eighth, tenth, eleventh and twelfth places in ’64. One 904 was fitted with the flat eight cylinder F1 engine, producing 220 hp, allowing it to top 175 mph. A year later the 904 received the all-new, 2-litre flat six engine derived from the recently unveiled 911, and one came home fourth overall and took the coveted Index of Performance prize. The Porsche trademark of ‘efficient performance’ had already given it the reputation of a giant killer. 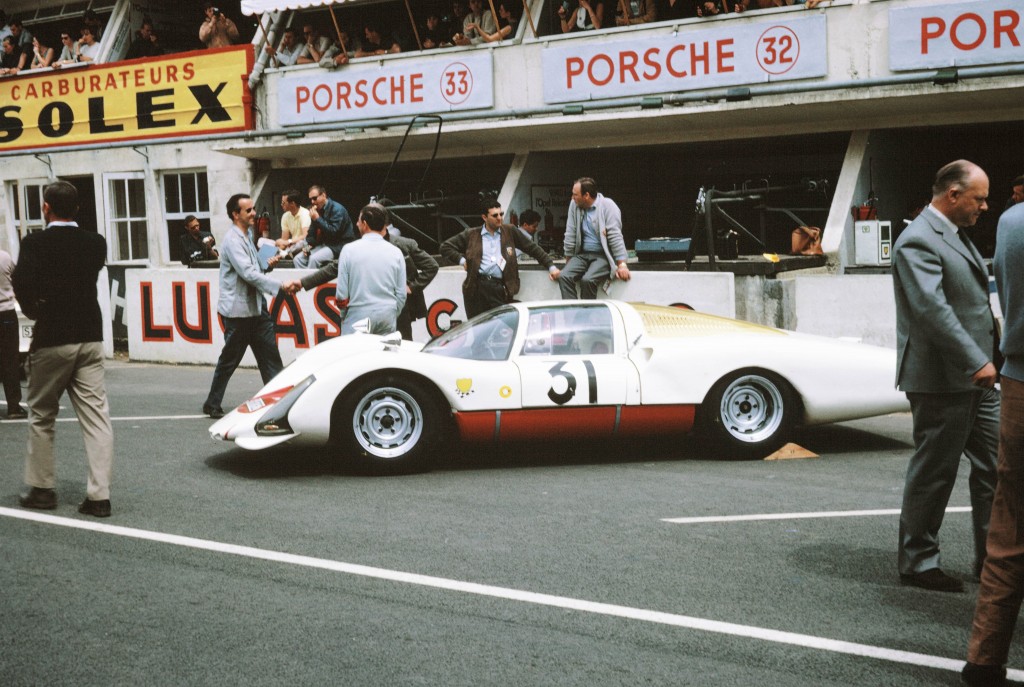 There was a new car for 1966. The air that passed over and under its curvaceous bodywork shaped its flowing form – startlingly low to the ground and brilliantly futuristic. It was also the first car under the watch of Porsche’s new Head of Development; a dynamic, fearsomely ambitious and driven individual, he was the nephew of Ferry Porsche and would, in time, become a key player in the global motor industry. His name was Ferdinand Piëch, and the car was the Porsche Carrera 6 (906).

The 906 used the 911’s 2-litre, flat-six engine but modified for racing, thanks in part to the use of titanium and magnesium components. Fifty of the 225 hp cars were built, and for the first time customers were warned to bring a trailer upon collection from the factory. The 906 took seventh overall and 2-litre Sports car class honours (repeating the feat a year later), but also served as a basis for the factory entry in the prototype class, as Porsche began to chase outright victory. With experimental fuel injection (which significantly improved fuel consumption) and low-drag bodywork, a trio of these eye-catching coupes came home fourth, fifth and sixth overall in 1966, a result all the more creditable given the race-winning trio of Fords had 7-litre engines. Porsche’s sports car activities would blast into the stratosphere in the following five years, but every car that followed – from 910 to ferocious 917 – had its roots in the overall design and engineering ethos of the Carrera 6.

Another odyssey began at Le Mans that year. A little red 2-litre 911 was entered for Jean Kerguen and Jaques Dewez (or ‘Franc’, as his name appeared on the entry list). The pair started 37th and finished 14th overall, winning the 2-litre GT class in the process. It was a successful if inauspicious beginning for a car that would play a key role in the history of Le Mans.

The lighter, more circuit-focused 910 appeared for the 1967 season, but such was the incredible rate of development at Porsche that it took a supporting role at Le Mans that year; the 907 was the Racing Department’s latest challenger, purposefully designed for the 24-hour confrontation. Leaner, with specially elongated bodywork, it could exceed 180 mph despite retaining the 2-litre engine, with fifth overall the result during the climax of the Ford-Ferrari wars. A year later a 907 took second overall; Porsche was getting nearer. 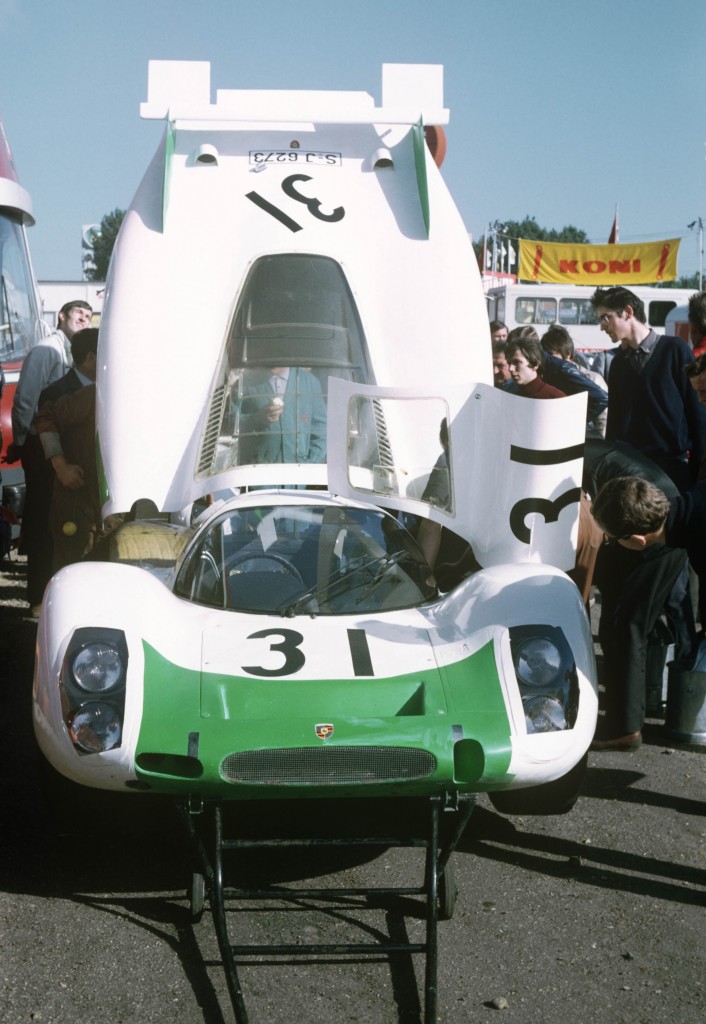 The 3-litre 908 became the mainstay of Porsche’s frontline racing activities from 1968 to 1969, its new 350 hp flat-eight serving notice that the firm was no longer the underdog, but a seasoned, professional team looking for the outright win. That so very nearly came in 1969: after a pair of new 917s had led in turn for so long, only to retire with clutch issues, Hans Hermann’s 908 was beaten to the line by mere yards after a terrifically tense battle with the GT40 of Jacky Ickx in the closing stages. 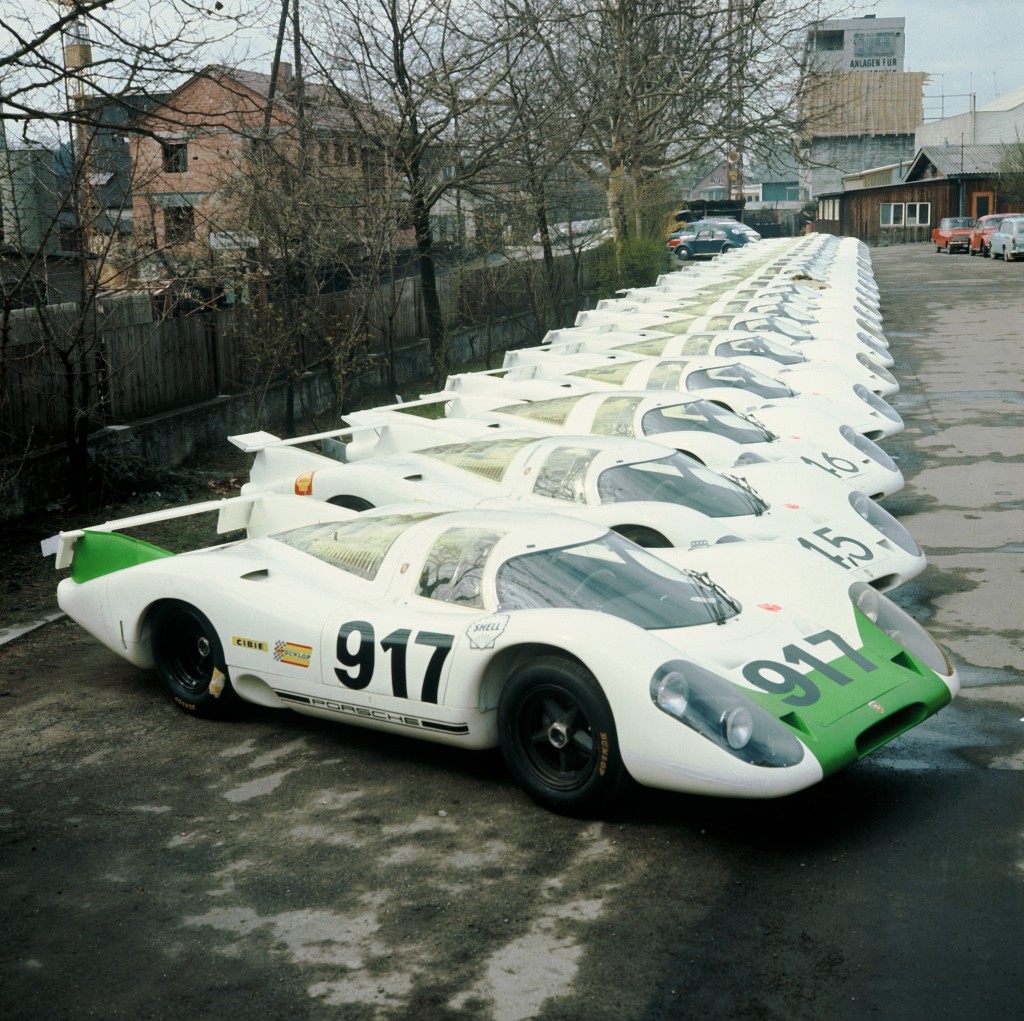 But what was this 917 that had caused such a sensation in 1969? In a year when man first walked on the moon, Porsche took its own giant leap. The 917 redefined motor racing, and over the next three seasons cemented its position as arguably the greatest racing car ever built. Its 580hp 4.5-litre flat twelve generated performance way in excess of its contemporaries, and began an era when sports cars often outpaced contemporary Grand Prix cars on lap times and for sheer drama.

Le Mans 1970 was the grand showdown between Porsche and Ferrari, a titanic tussle still spoken of in awe to this day. Seven 917s were ranged against 11 512 Ferraris, with the long tail 917 variant reaching an incredible 236 mph on the Mulsanne straight. The race was a brutal 24-hours of attrition, partly due to torrential rainstorms and fog. Through the melee came the 4.5-litre 917K of Richard Attwood and Hans Hermann to clinch an emotional victory: Porsche’s dream was realised, with a 917 LH in second and a 908/2 LH in third.

Behind the big twelve-cylinder cars was even more success for Stuttgart. During the latter years of the 1960s, the 911 had become a mainstay of privateer entrants in the GT class. By 1970 it had achieved dominance of the GT 2.5-litre class with the ST model, a Group 4 development of the 911 S road car. That year the ST of Erwin Kremer and Nicholas Koob was seventh overall and class victor. One place better was a 914/6 GT, the racing version of the new mid-engined 914 road car, which also took 2-litre GT class honours. Porsche’s name was writ large over the results sheet, wherever one looked.

1971 was to be the 917’s zenith. Porsche entered short and long tail 917s and a unique 917/20 ‘Pink Pig’ one-off to battle the Ferrari challengers, with victory falling to the experimental magnesium frame 917K of Gijs Van Lennep and Helmut Marko. In the process a total distance record of 3,315.2-miles was set, that would not be bettered until 2010.

In just 20 years, Ferry Porsche could reflect upon how the company that bore his name had gone from one entry per race to 33; from 49 hp to over 600 hp, and from 100 mph to 240 mph. Thanks to sheer hard work, innovative engineering and a will to win, Porsche had made Le Mans its home from home.