If you know anything about the Olympus Rally, you might know that it was a round of the first ever US rally championship, a former WRC event, and was the last rally for Group B cars. Tough. Technical. Legendary.

If you’ve been following my season, you probably know that Sno*Drift went as planned, 100 Acre Wood gave us a lot of trouble, and Oregon Trail was a ‘press on regardless’ rally. And of course, last year we only made it to Bob Lake at LSPR.

We arrived in Seattle on Wednesday night and drove out to Tacoma for the night. Thursday’s press stage began at 1300 and went until 1700, so we grabbed sandwiches and went out to the road early. Brian was just arriving with the rally RAV4, Tino was there, and so was SRTUSA. Ole was set to get there around 1300, and the cars were expected shortly thereafter. However, 1630 rolled around and we still had no car. The new (old) ECU had arrived back from Ford about a week before in NH, but the dealership in Shelton couldn’t get it to mate with the car.

While we recce’d Friday, the guys went to work, speaking with the engineer that modified the program. They also called six or so dealerships trying to find somebody that could make it work. Finally, they found a tech that had some tricks up his sleeve and was able to get everything in communication.

The car ran flawlessly. But having no problems with the car presented a new challenge…

Having problems meant adapting. The car never ran on gravel without issue, so my learning of the car encompassed its fault: timing shifts to bumps in the road, driving up a gear, never leaving the throttle pinned. Now, there was no code, no limp mode. There was new gearing and the ability to shift into power. It was essentially a new car.

The first leg, 35 stage miles, was a lot of ‘getting to know you.’ I started stage 1, Stillwater, off super close to jumping the start because I was unprepared for the reactiveness of the new gearing. The first few miles were a complete mess. We picked up the pace and I cleaned up my act, but we finished over 30 seconds behind Jordan Guitar and Billy Jang. In stage two, Plug Mill, we were only 7.7 seconds behind. For stage 3, Deckerville, we were 16 seconds off Guitar/Jang… the unfamiliar gearing becoming even more apparent to me as I chose the wrong option more times than I wish to admit. Stage 4, Schaefer, had me a bit nervous going in that I had been too liberal with the corner degrees when writing the notes. After a couple miles, I realized that I really had nothing to worry about and picked up the pace. We finished Schaefer 37.7 seconds behind the Honda Fit team, but I knew I would be quicker the second time though. On Stillwater II, we had both dropped our times, but we had a bigger gap between the two of us, over 45 seconds. On Plug Mill II, I was able to drop my time far enough to finish 1.1 seconds behind Jordan and Billy. I had a near-spin on Deckerville II, eager to make up time. Although we didn’t actually pirouette, Ole estimated that it probably cost us at least 10 seconds, and we only finished 12.1 seconds behind our competition. On Schaefer II, I closed the previous gap of 37.7 seconds down to just 20, not as far as I would have liked, but a fair improvement.

Going into the last stage, Wildcat, we were moved ahead of four or five cars, saving us a bunch of waiting and giving us some extra daylight. More importantly, we were now only two cars behind Jordan and Billy, so the conditions of the road and lighting would be consistent for both of our runs. Our Team O’Neil teammates, Eric Grochowski and Ian Williams, were seeded between us. If you’ve been following rally at all, you probably saw a photo of their car backed up a tree. This occurred about eleven or twelve miles into Wildcat. We were so stupefied at what we had seen that (we missed a corner and) the next note that Ole called couldn’t have been more wrong. Although we had only been a note or two off, I drove blind for about a mile before we were able to match a note to what we were seeing. When we picked back up, I was a little too ambitious to make up some of the time we had just lost. I had also started the first beginning of the stage at only a moderate pace before picking up speed through the series of 3’s. After realizing that I was getting ahead of myself, I took a moment to compose myself before pushing through the last four or five miles. Coming off the stage, I anticipated being 80-100 seconds behind the Honda team, but was happy to find out that there was only a 51.2 second gap. We finished day one second in B-Spec, as usual this season, but fifth in 2WD after multiple cars succumbed to the roads. Luckily, most were able to re-join for Sunday’s stages. My plan for day two was just to try and set some competitive times, while driving well, pushing myself, and getting more comfortable with the car.

In case you missed it: 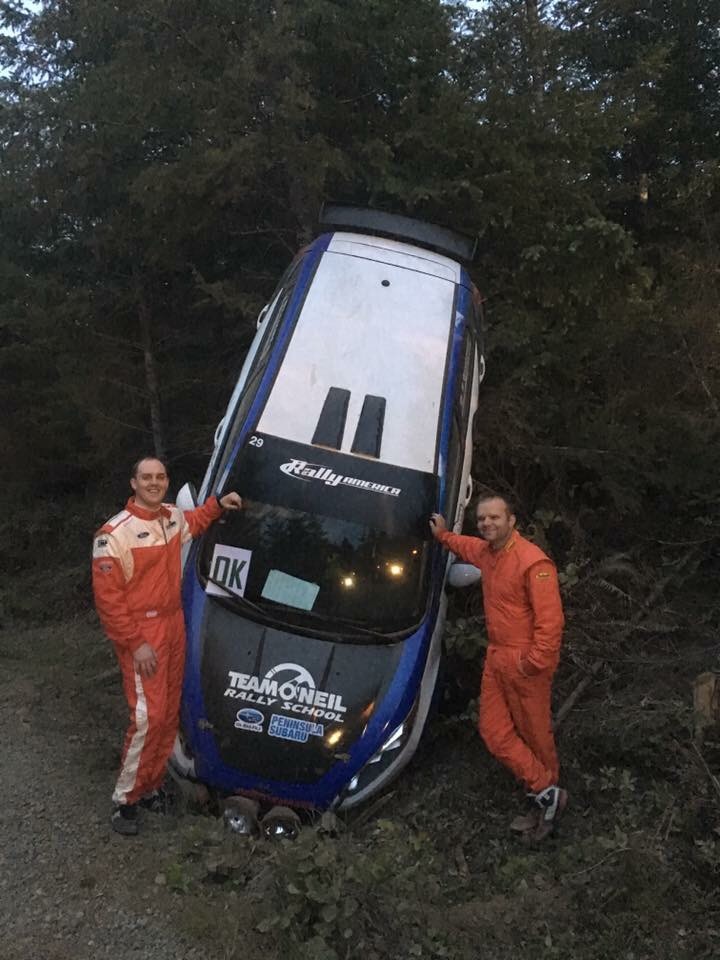 Sunday began with stage 10, Windy Nahwatzel. We made it to the spectator area on good time, but I flatted the right front tire on a bump mid-corner. I tried to drive it to the end, but it was apparent that the car would not have it. Pulling more and more to the right, we decided that we had better change it. After the swap, we got a second flat… not even fifteen seconds later. This time, we had no choice to drive it to the end of the stage. By the time we reached the control, we were driving on the rim, and had to still drive the transit that way. 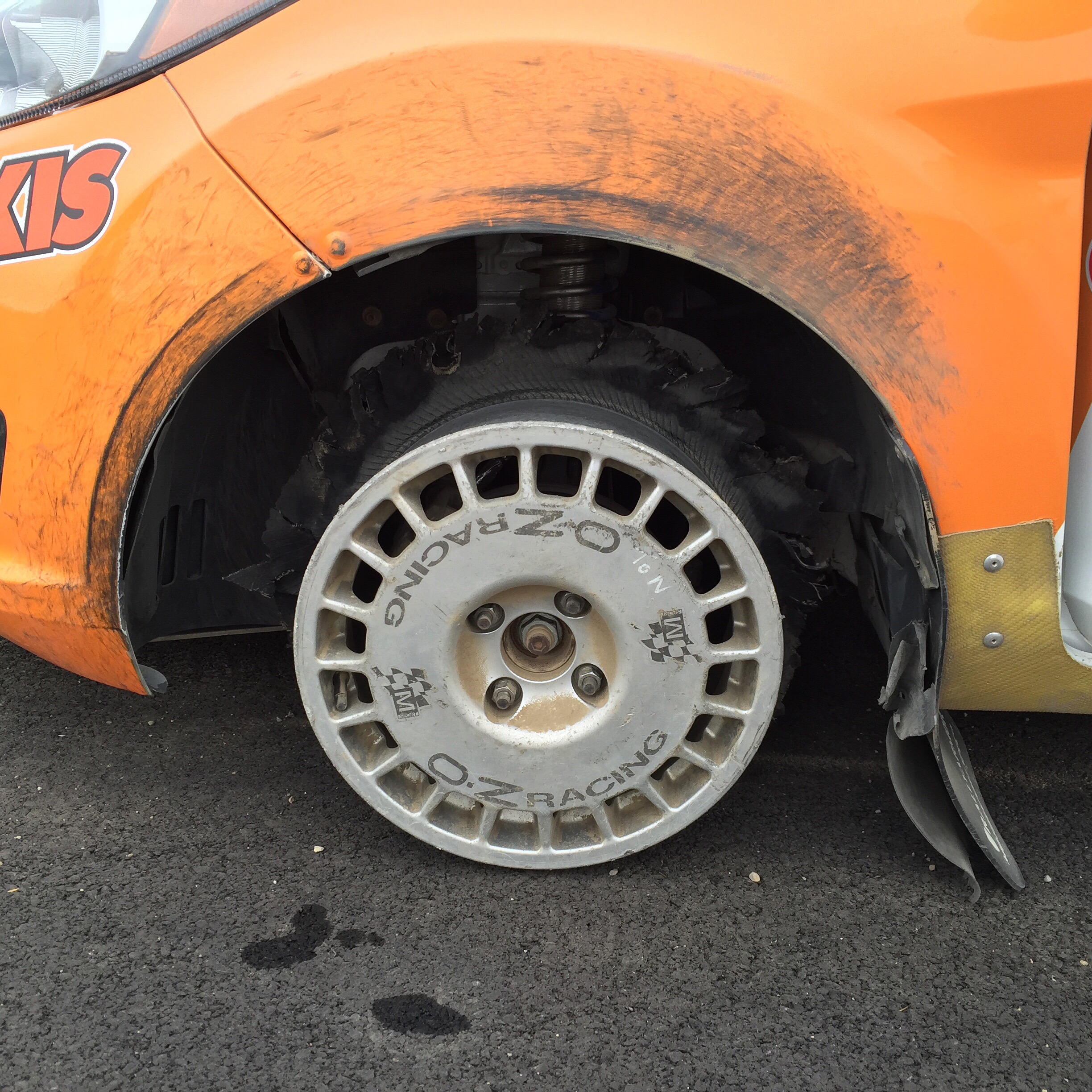 We had started the day on two brand new front tires and got ten miles out of each of them, but I can’t complain… that’s rally.

Stage 11 was Bingham Loop. When recce’ing it, Ole thought it was a pretty weird stage, and I thought it would be fun. Though I couldn’t tell you what exactly makes it atypical, it’s definitely different. Part of the way into our minute, we were told to not go anywhere. It sounded like there was debate of whether the stage would be shut down or if dispatch was needed. And then it was over, and we went. There were two things we had to slow down for on Bingham: triangles (and a car), and a bumper blocking a large section of the road.

Cougar-Govey was the final stage. A little ways in, we encountered a car on its side, blocking a portion of road. All was okay, though the traffic instruction was a bit of a mess. As soon as we made it past, there was instantly another set of triangles. At the end were our teammates, Steve and Alison LaRoza, whose hope and zip ties unfortunately couldn’t get them through the final stage.

As we pulled into the podium waiting area, we were asked if the LaRozas were coming. As we regretfully let them know that they would not be, we were informed that we were now the top placing Team O’Neil car. So we finished Olympus 4th in 2WD and with another 2nd in B-Spec. Had we not lost gotten those two flats, we may have even broken top 10 overall.

The folks at Rally America were kind enough to make us up a speed factor that didn’t include 100 Acre Wood, since we had oh-so-many problems, including going into full limp mode five times on County Line. The only other two events that could be used were Sno*Drift (our highest) and Oregon Trail (where we still had plenty of issues). I’m looking forward to the day when my speed factor is no longer compromising us. While being seeded father back can be an advantage on the really loose parts since the road is better swept, we see more cars off, rocks pulled up, and parts in the road; get less (or no) light in the twilight stages; experience larger dips and ruts with the higher levels of road degradation; or even doing a stage in the rain when it was dry for the competition. Those eight, ten, or sixteen minutes all make a difference. I am hoping that Olympus will be the start of seeing that number increase and am looking forward to seeing what the second half of the season holds.