Coming from the world of Stage Rally, I’d never really followed Drifting. I had a general idea of what it was, knew there was a professional series known as Formula Drift, but past that I never gave the sport much thought.

Back tracking about a month to the Empire State Performance Rally found me on the inside of a hairpin dowsed in a healthy helping of sand and grit. Bill Petrow of Broken Motorsports flicked his 240sx around the corner in an awesome display of car control and showmanship. 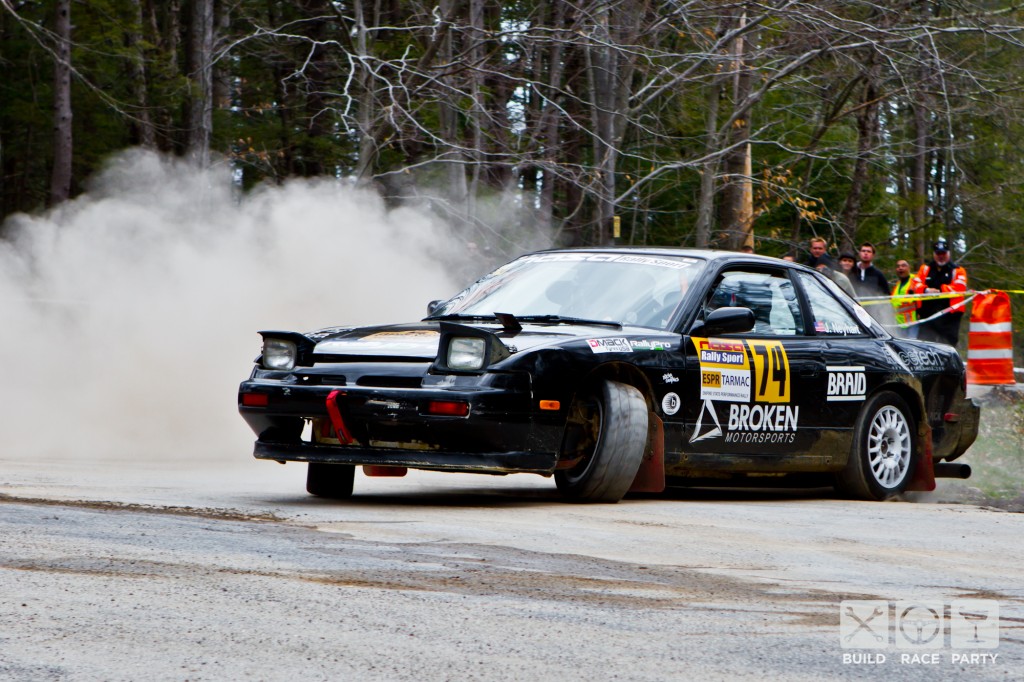 I found out a little later the car he was rallying was also his drift car, something I really didn’t expect on the high speed roads of ESPR that sent Build Race Party’s Matt Brandenburg flying 156 feet. That got me interested enough to find out where Bill would be drifting next. And so Memorial Day weekend found me at Englishtown Raceway for Club Loose’s East Coast Bash. 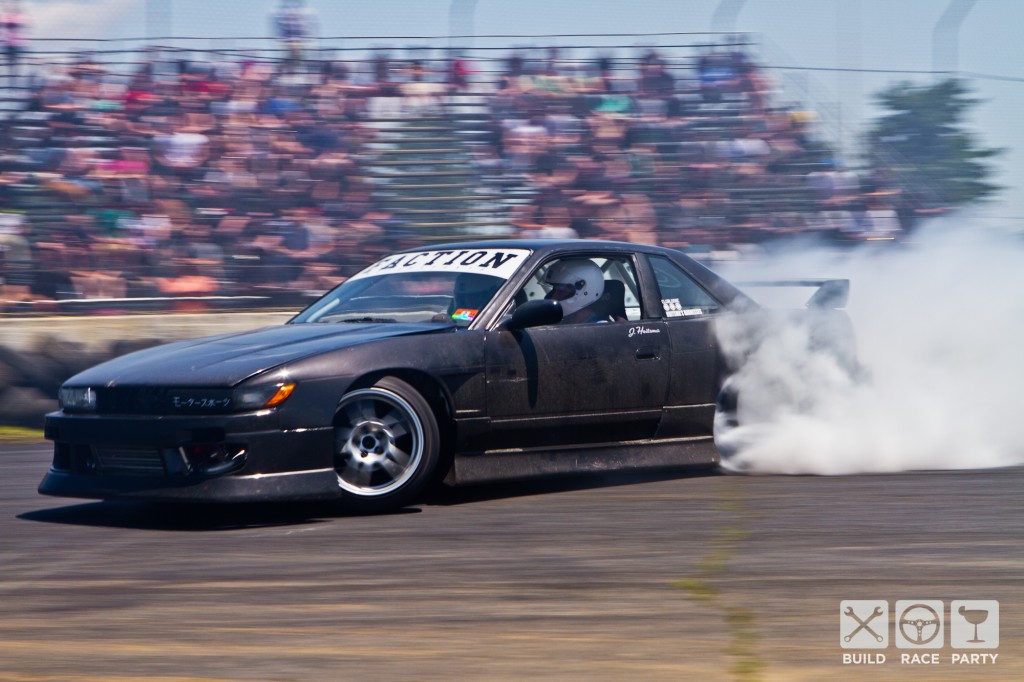 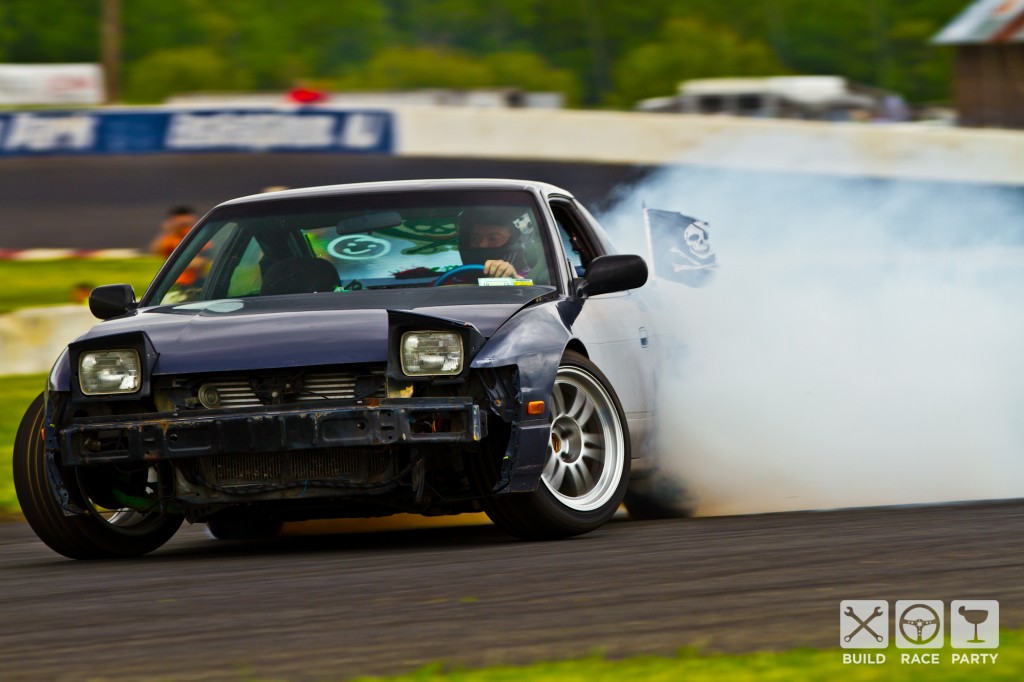 For those uninitiated in drifting (like me) drift competitions are scored on the basis of style, line, angle, and in some cases speed.

Style: how well is the driver transitioning between corners, how exciting the run is for the spectators.

Line is all about fluid movement: entering, exiting, and apexing are all judged. On many occasions, particular corners have areas where the judges want the nose or tail of the car to be.

Angle and Speed are straight forward as well. Angle refers to how sideways the car is at given points and speed refers to how fast the car is traveling while meeting the other criteria through the course. 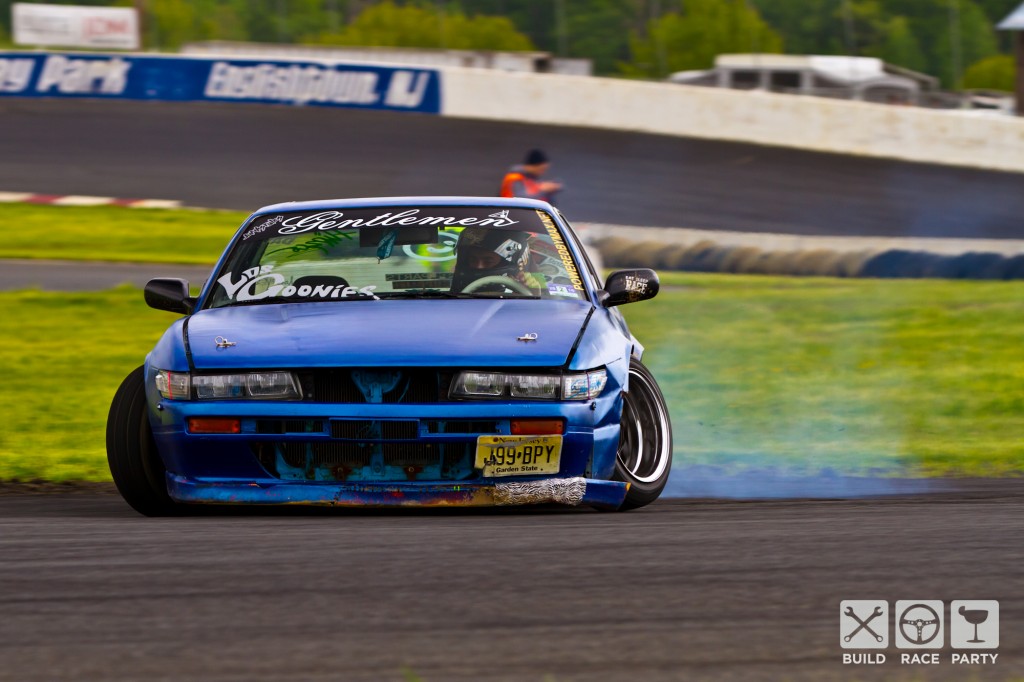 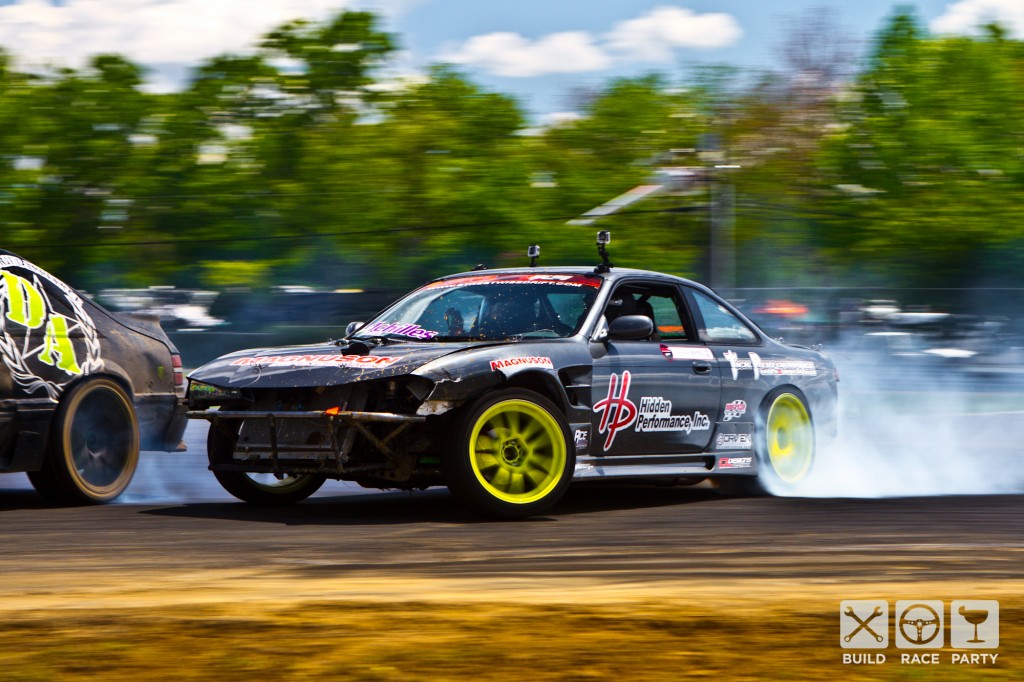 The event itself was stretched over two full days of non-stop drifting action. When I say non-stop I mean it. The guys at Club Loose have figured out how to turn the event into an incredibly well-oiled machine. Three groups C, B, and A each ranked by level of skill split the huge field of drivers. Each group gets about an hour of time on course and the next group comes in 5 minutes later. Coming from Stage Rally, where a 1 hour stage delay isn’t completely unexpected, I was a bit skeptical when I looked at the schedule with zero slack time. To my surprise, however, the Club Loose organizers have this down to an incredible rhythm, even in through the rain they left only a few minutes for media to jump from vantage point to vantage point between group swaps.

Group C is for the drivers just starting out learning how to properly drift. 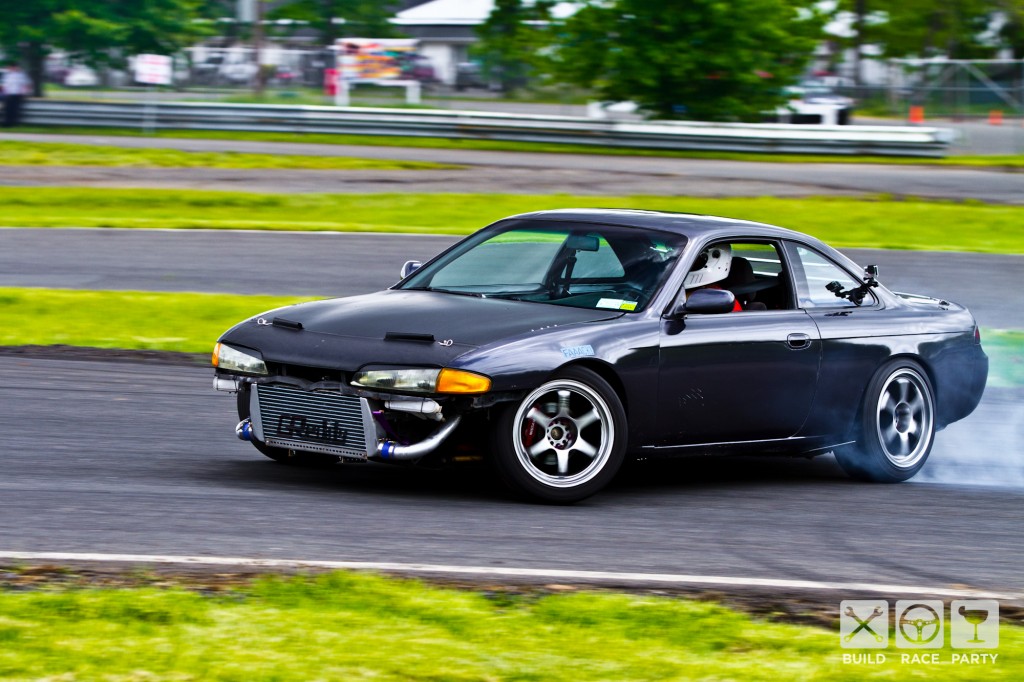 Shanan Garber in her husband’s Lexus. 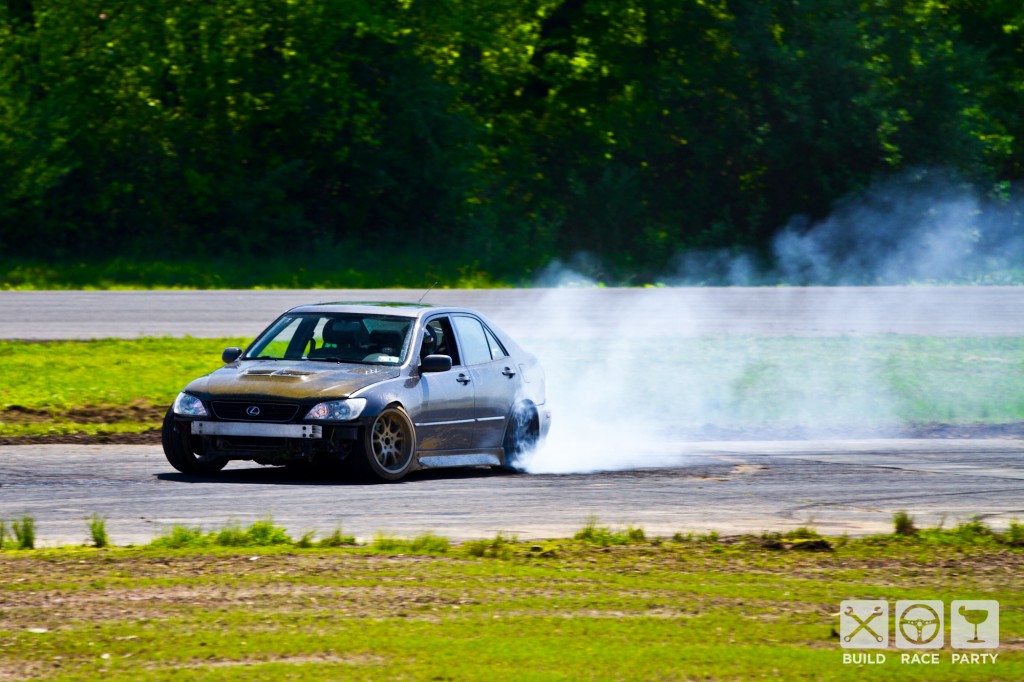 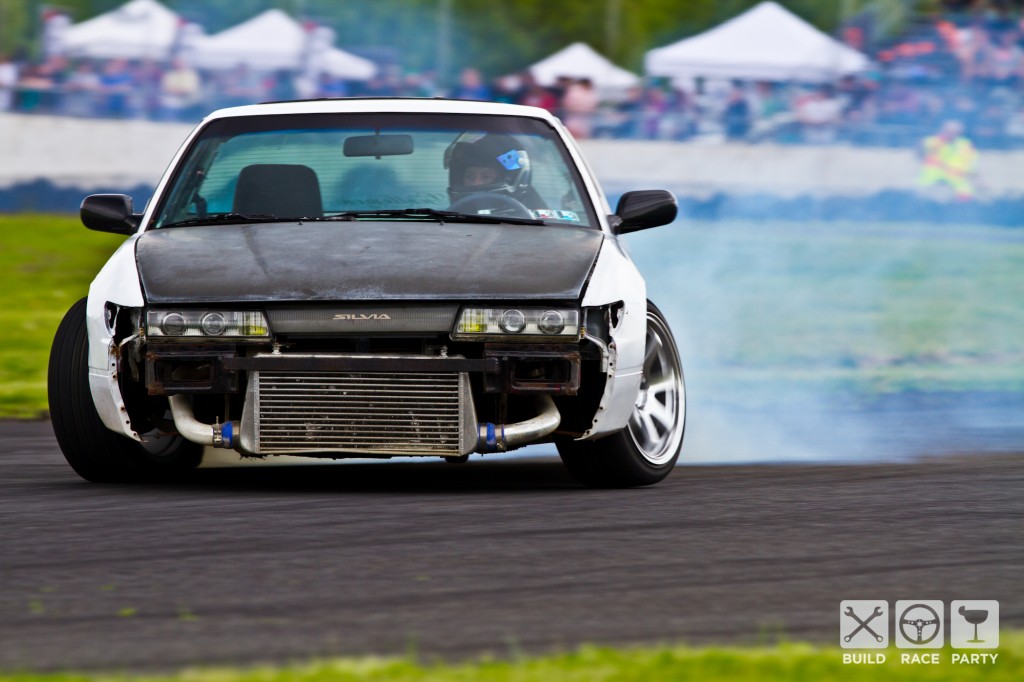 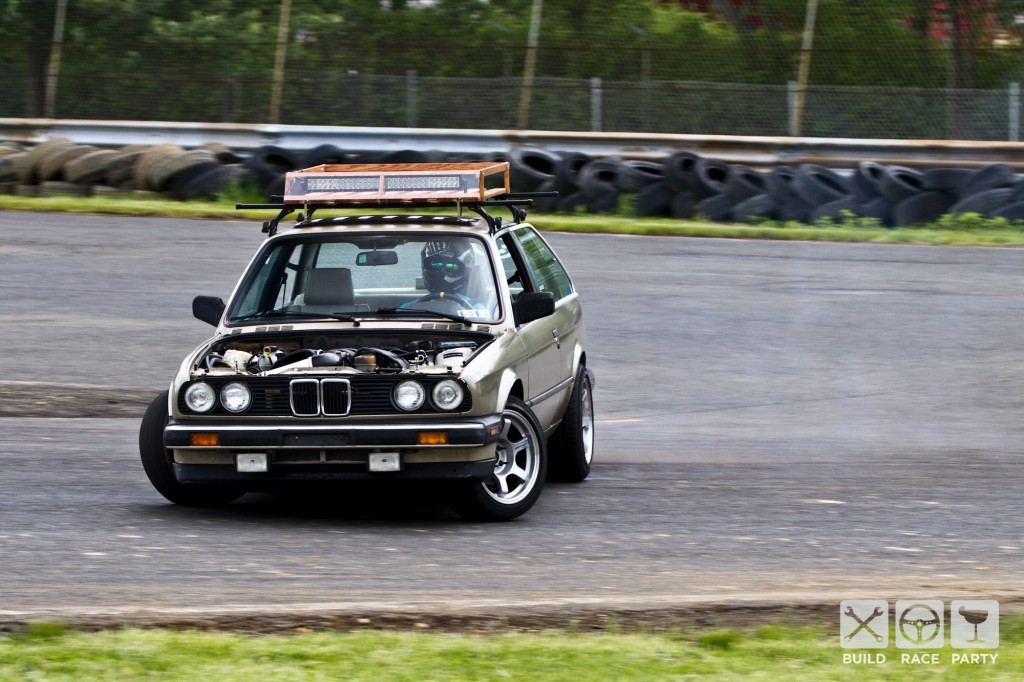 Group B is where C moves up to, they start showing promise and some are capable of some really excellent driving.  B group is also for the guys that know what they are doing but don’t have a caged vehicle. 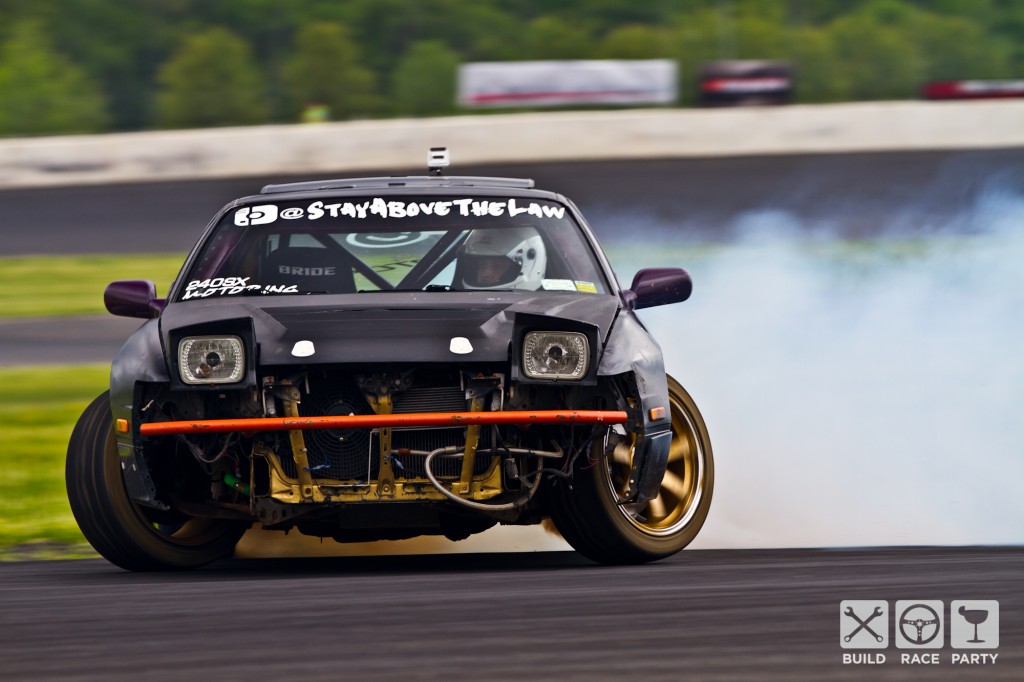 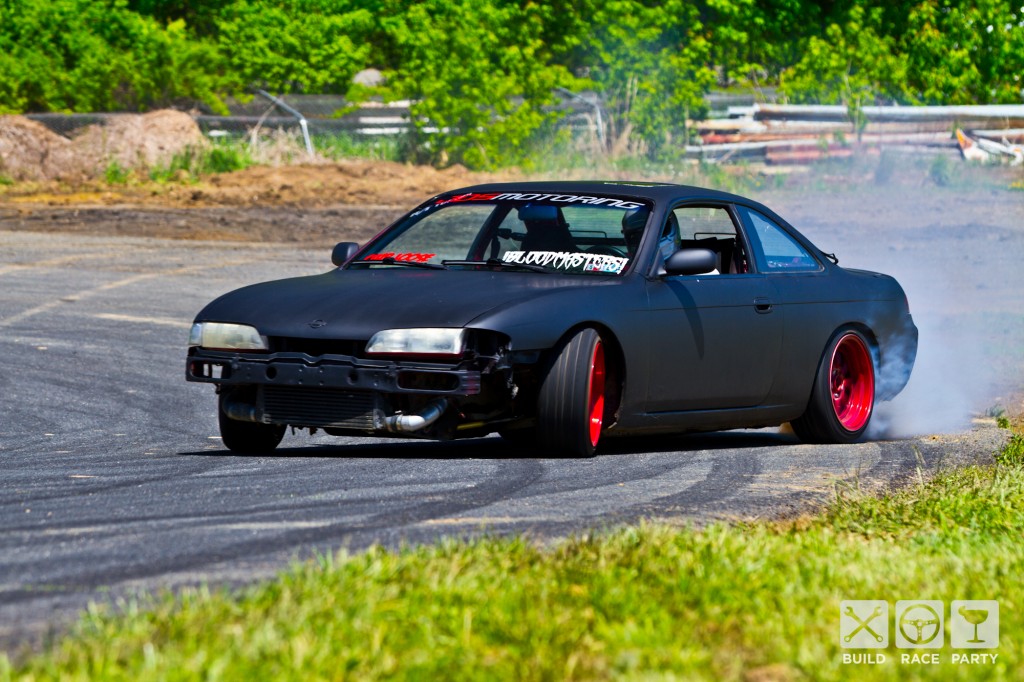 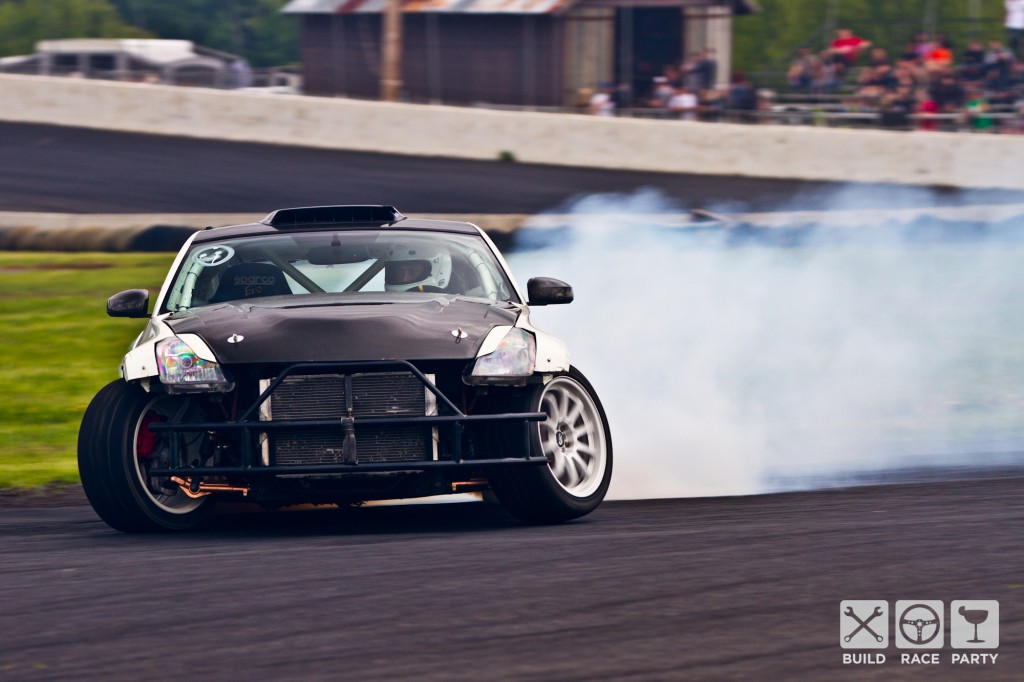 Group A is the cream of the crop, from individuals to groups of 3 or more cars drifting through the course in what looks like a fully choreographed manner: the drivers abilities to fully connect with their cars and one another is absolutely incredible to witness.

Chris Allen in his 240sx with a turbo charged KA engine. 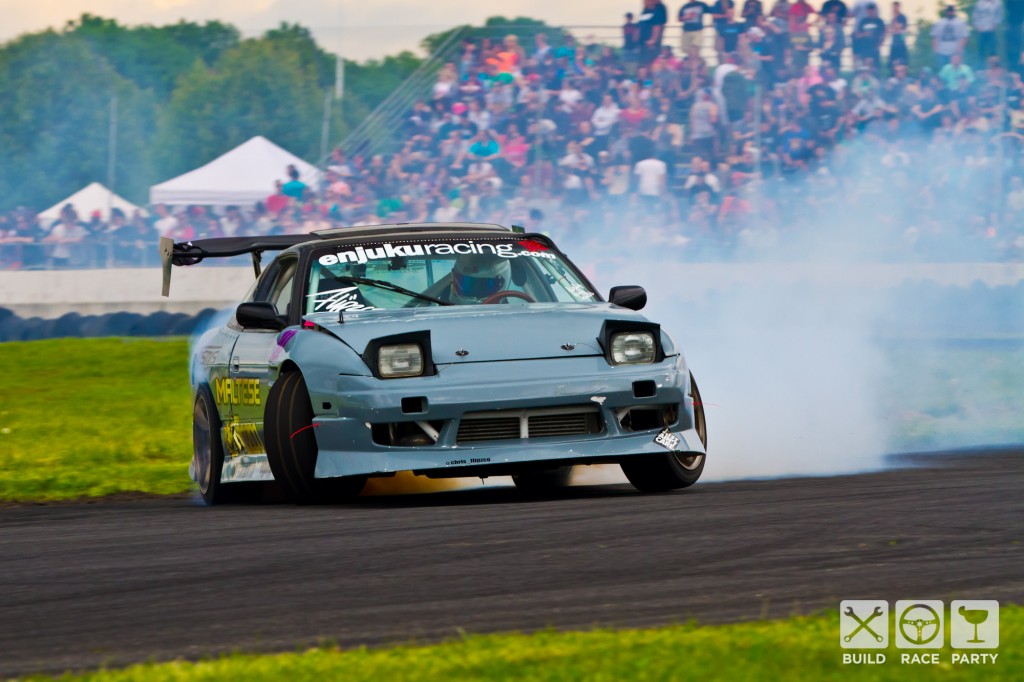 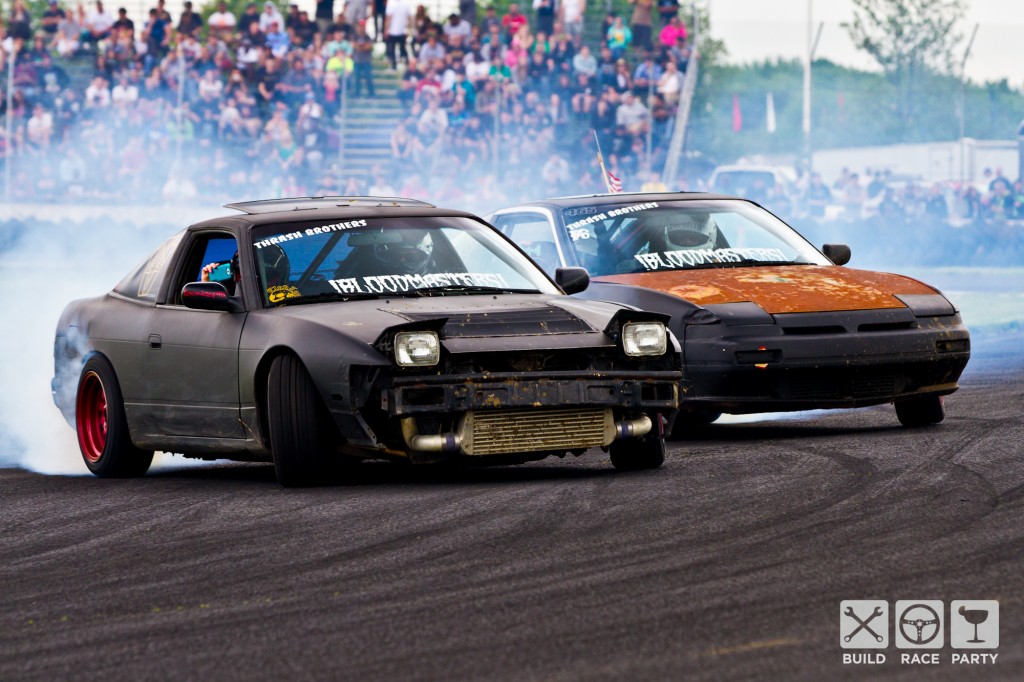 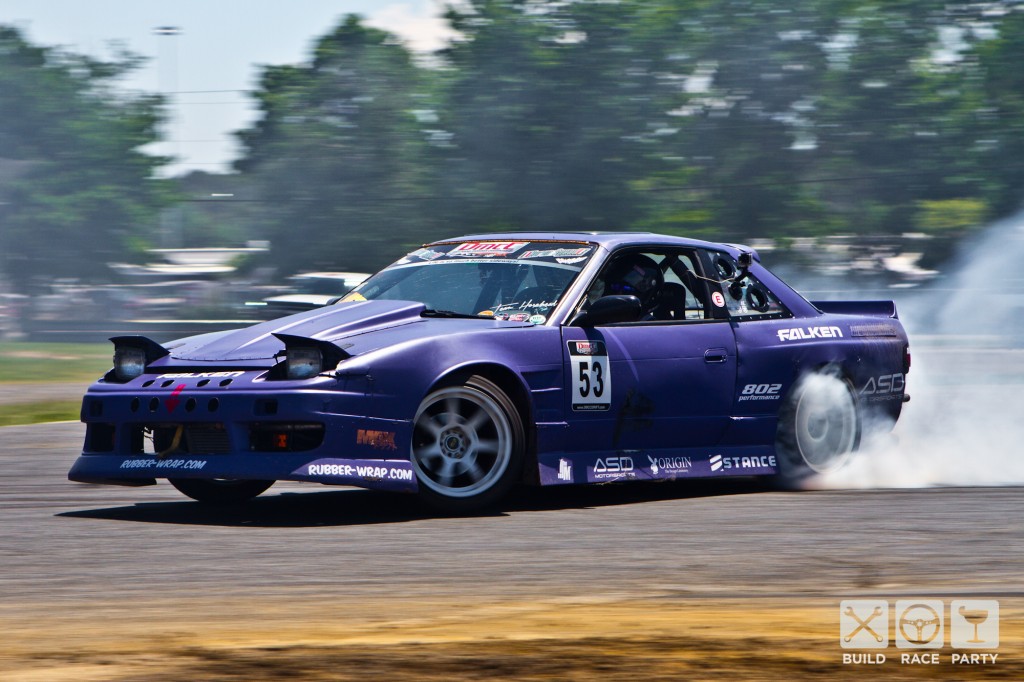 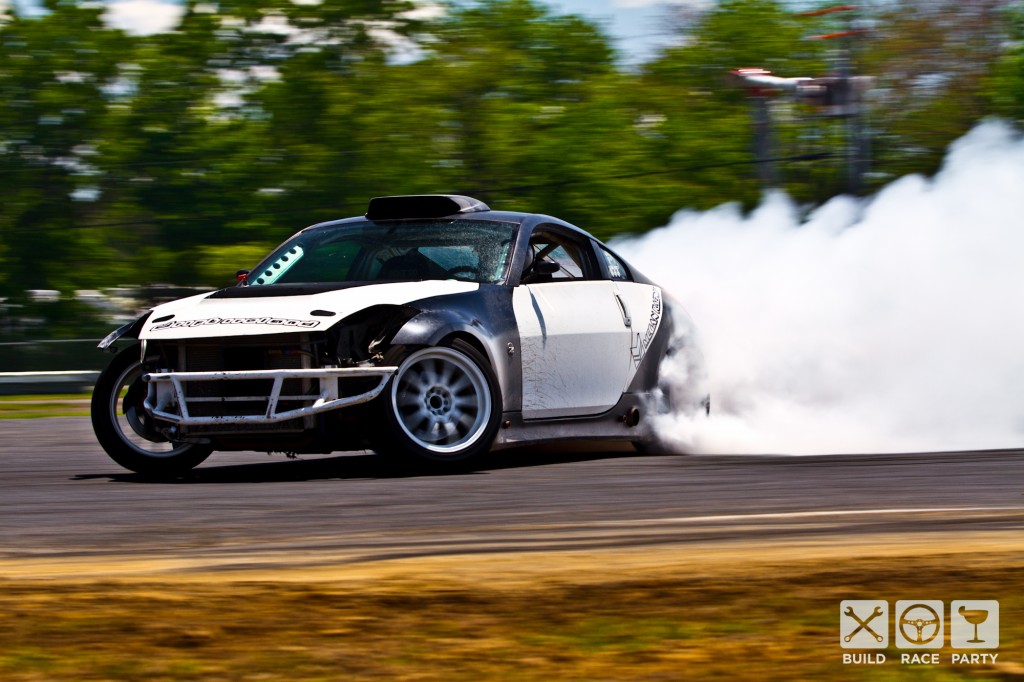 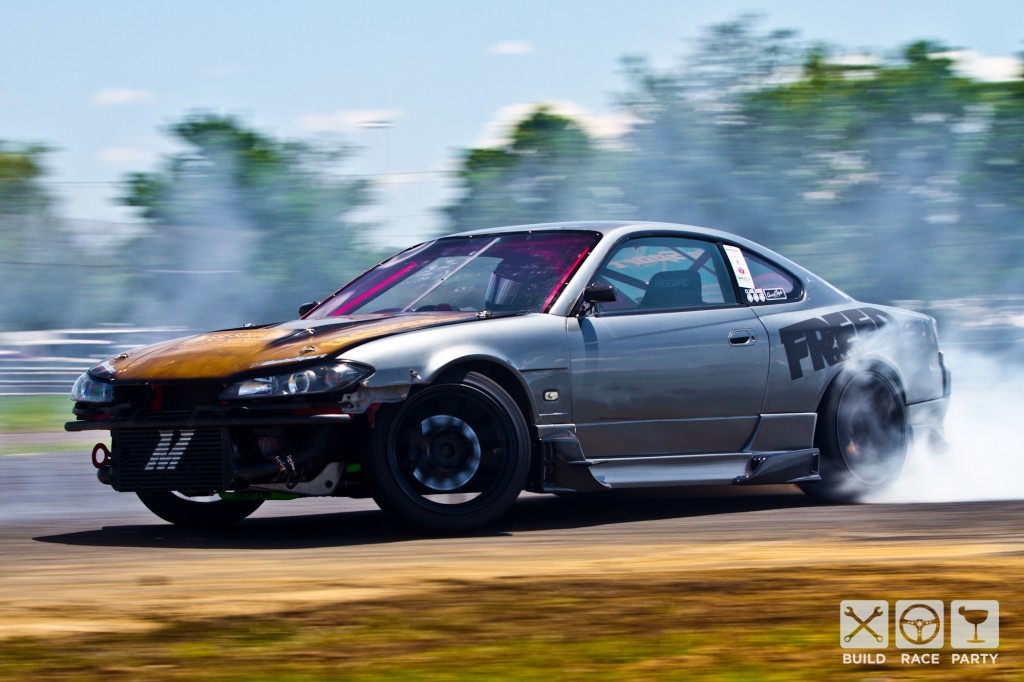 Before heading to the event I was told to keep an eye out for Formula Drift drivers, having never really followed the sport before I didn’t know who to look for. I was planning on looking for the flashy 800+ whp cars to be out on course but that’s not what I found. After asking around I managed to find Ryan Teurck as well as Vaughn Gittin Jr, Chris Forsberg, and Tony Angelo out on course driving under their Drift Alliance team name. 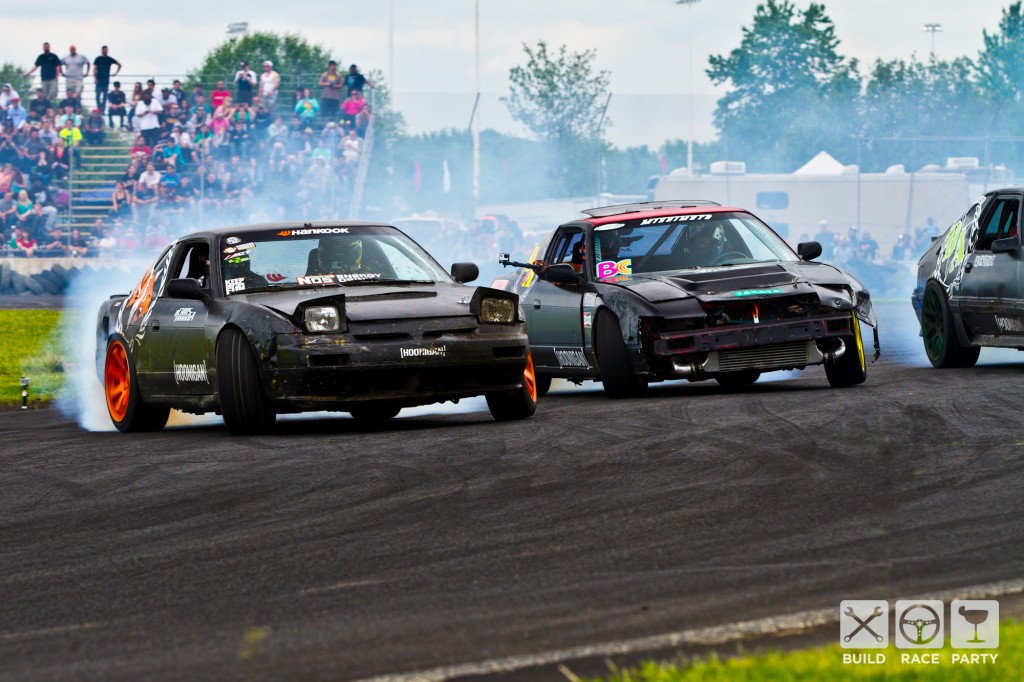 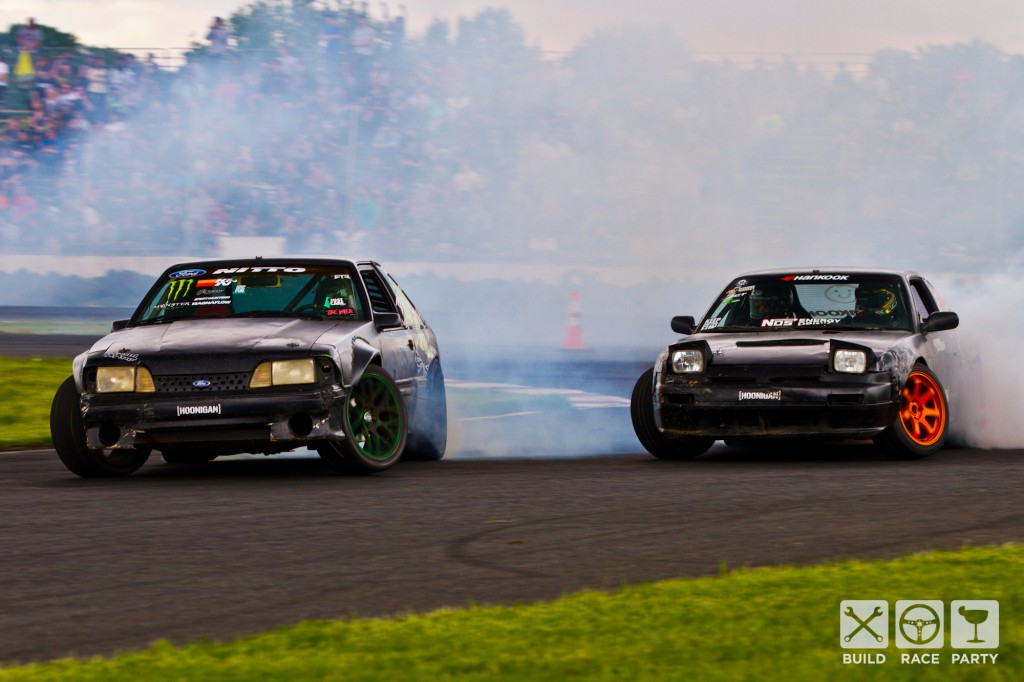 In between runs Saturday evening, Ryan was kind enough to chat with me for a few minutes about DA, his car and why professional drifters would come to out to a primarily grass roots drift event. The four Formula Drift drift were each running their personal missile cars. Ryan’s car the a Silvia s13 with an sr20 swap putting down about 300 wheel horse power, about 530 horses less than his FD car. Aside from the wheels and tires being old sets already used by his FD car, there’s nothing particularly fancy about the s13, nor any of the other DA drivers’ cars. Plenty of other cars in the park put together on small budgets met or even improved upon the DA’s setups. What made the difference was the teams experience and skill.

Despite the rain, DA members  Chris Forsberg (left), Ryan Teurck (center), and Vaughn Gittin Jr (right) drifting around the hairpin in the rain. 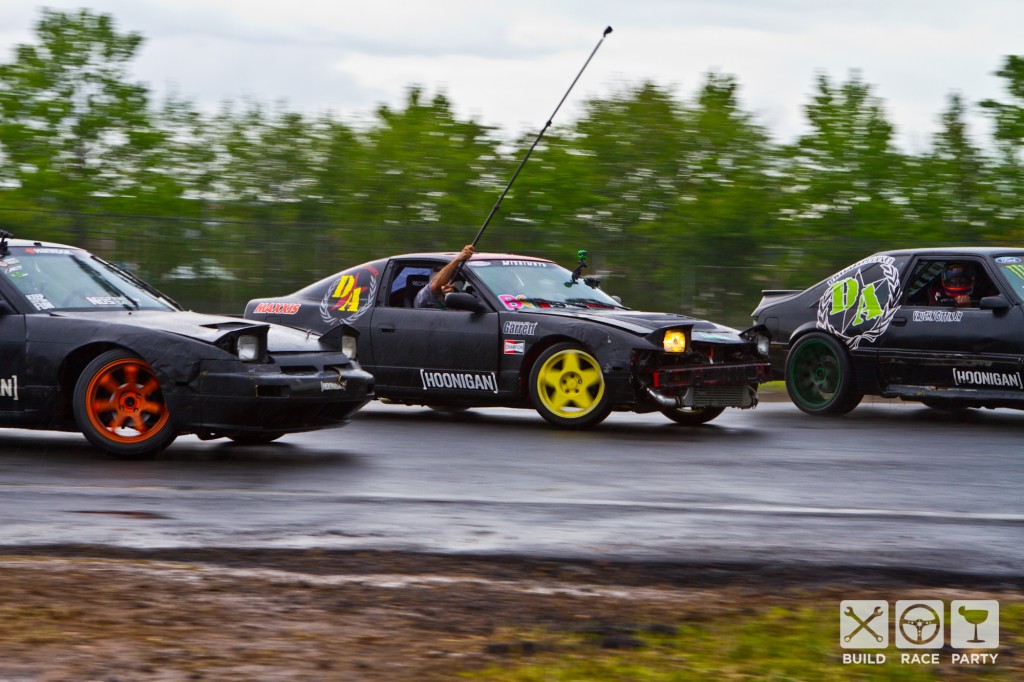 11 years ago the DA team started drifting together at Englishtown Raceway as a group of friends before professional drifting was even a consideration. Tony Angelo came up with the name for Drift Alliance and Ryan was brought into the team a few years later.

So why do these professional drifters come out to this event each year? Ryan put it pretty simply, “[It’s the] best event [they] all have every year.” Not only is Englishtown the origin for each of their careers but, East Coast Bash isn’t about competition, it’s about drifting, the cars, the community, and booze, booze was literally scheduled for 10:00 PM once the driving Saturday night was done. East Coast Bash provides an excellent atmosphere to hone skills, make new friends, reconnect with old ones, and enjoy the art of drifting for the sake of drifting. Before coming to the event, I didn’t really get drifting, I didn’t understand why there was such a huge following. After heading to East Coast Bash and watching the event, talking with Ryan and other competitors, I have a better understanding of the force behind it. Next year’s East Coast Bash will be on my calendar, and it should be on yours too.