Back-to-back races: Only six days after the iconic endurance race at Le Mans, the 24-hour race at the Nürburgring will start on Saturday, June 21. Five Audi teams with eight Audi R8 LMS ultra cars will be battling for victory in the Eifel endurance race. With the current Le Mans winner Marcel Fässler at the wheel, as well as Pierre Kaffer, René Rast, Nicki Thiim, Richard Westbrook and Roman Rusinov, six drivers are even contesting both of these important 24-hour races. 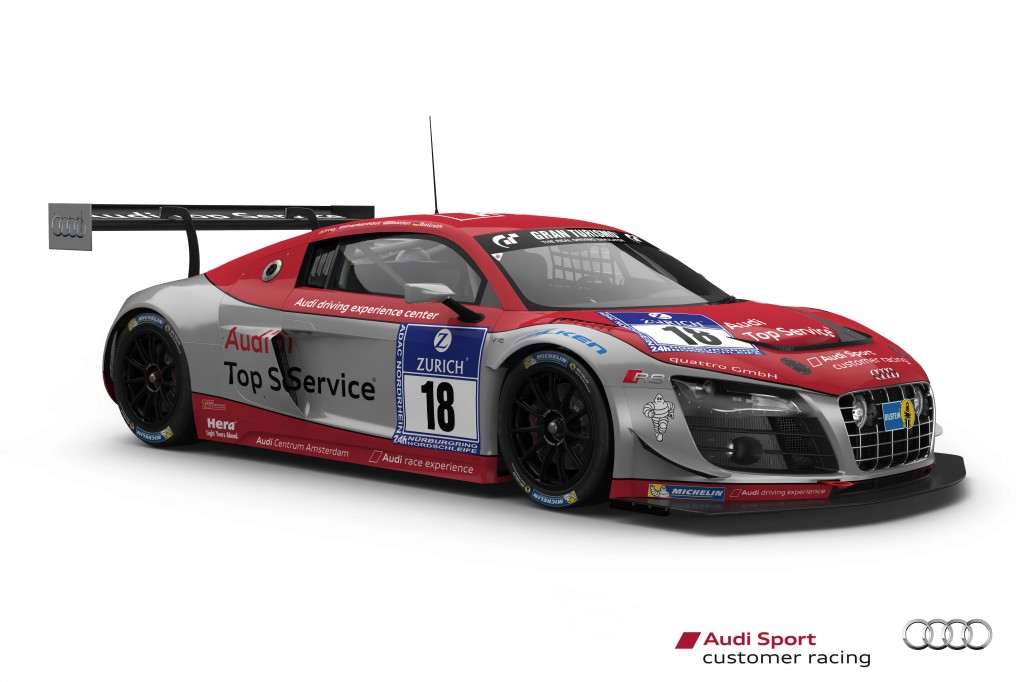 After the Audi R8 LMS ultra took class victory in the Nürburgring 24 Hours three times between 2009 and 2011, Audi Sport Team Phoenix celebrated the first overall victory for Audi in 2012. In 2014, Phoenix Racing is again fielding two factory-backed Audi R8 LMS ultra cars. All four Nürburgring winners from 2012 are again running for the squad based in the Eifel but are assigned to the two cockpits in new line-ups. Marc Basseng (D) and Frank Stippler (D) will receive the 2011, 2012 and 2014 Le Mans winner Marcel Fässler (CH) and the 2013 FIA GT Champion Laurens Vanthoor (B) as team-mates in the car designated as number 3. The 2012 Nürburgring winners Christopher Haase (D) and Markus Winkelhock (D) will be sharing the sister car with the Nordschleife specialist Christian Mamerow (D) and the three-time Supercup Champion René Rast (D). 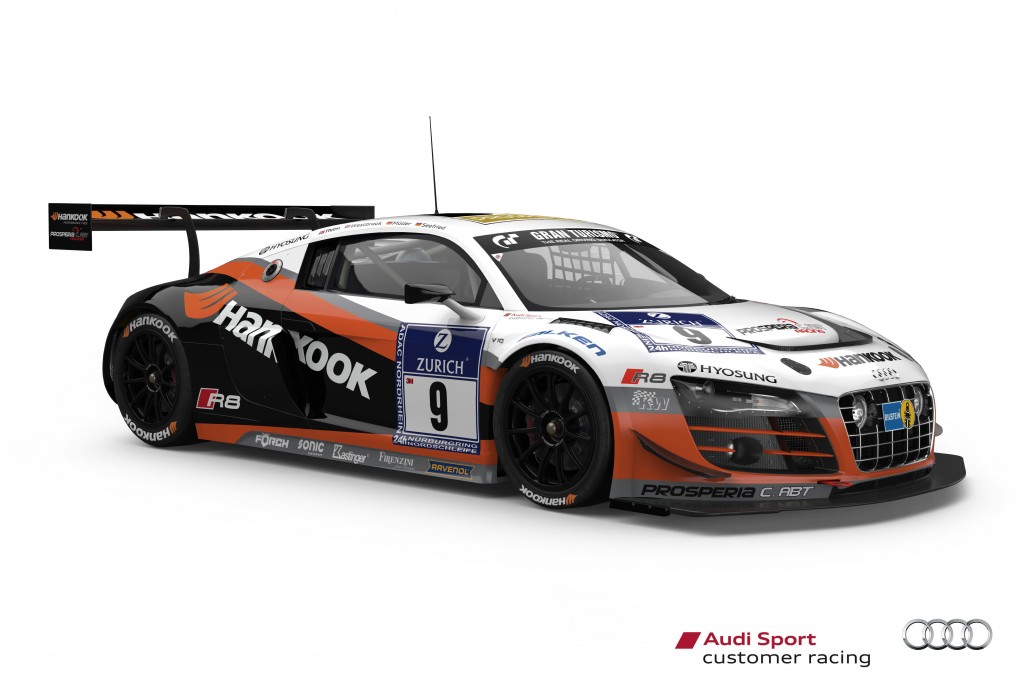 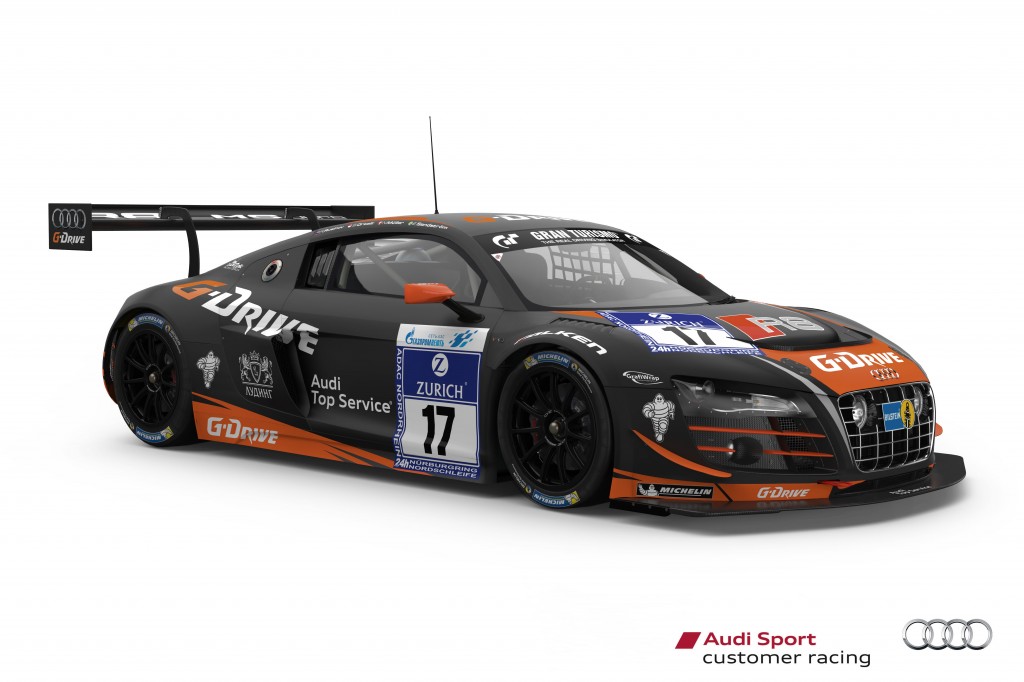 The squad of G-Drive Racing relies on an international line-up. Audi factory driver Nico Müller (CH) from the DTM is making his debut in the 24-hour race at the Nürburgring alongside Roman Rusinov (RUS), Edward Sandström (S) and ex-Le Mans winner Stéphane Ortelli (MC). 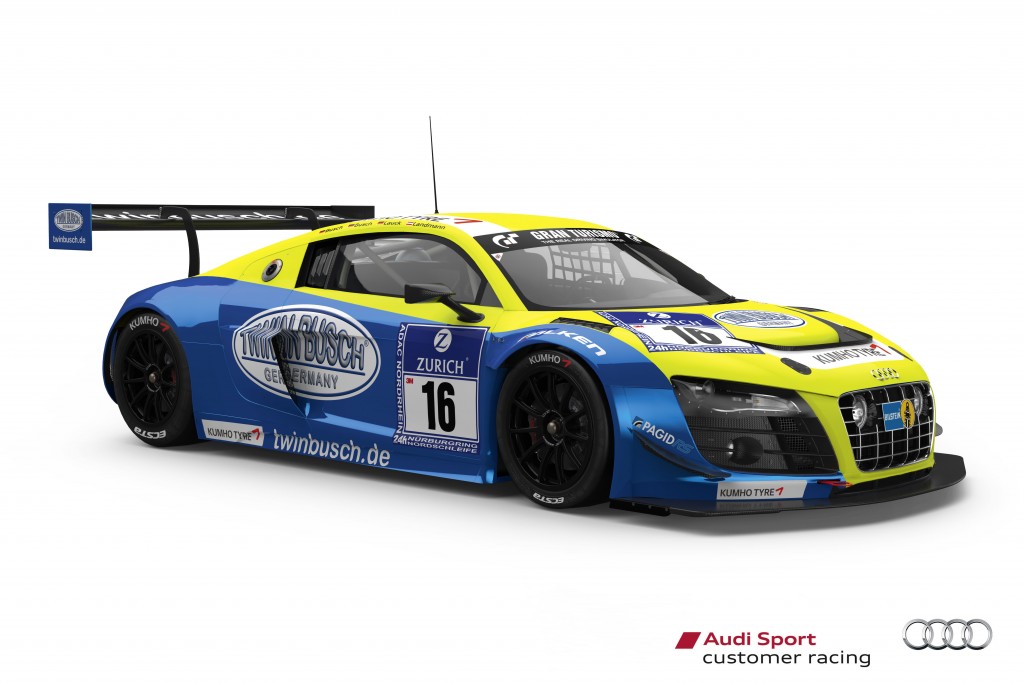 Team Twin Busch Motorsport is contesting the classic endurance race at the Nürburgring for the second time with Audi. Three drivers from last year – the brothers Dennis and Marc Busch (D) and Manuel Lauck (D) – will be on the grid, supported by Stefan Landmann (A). 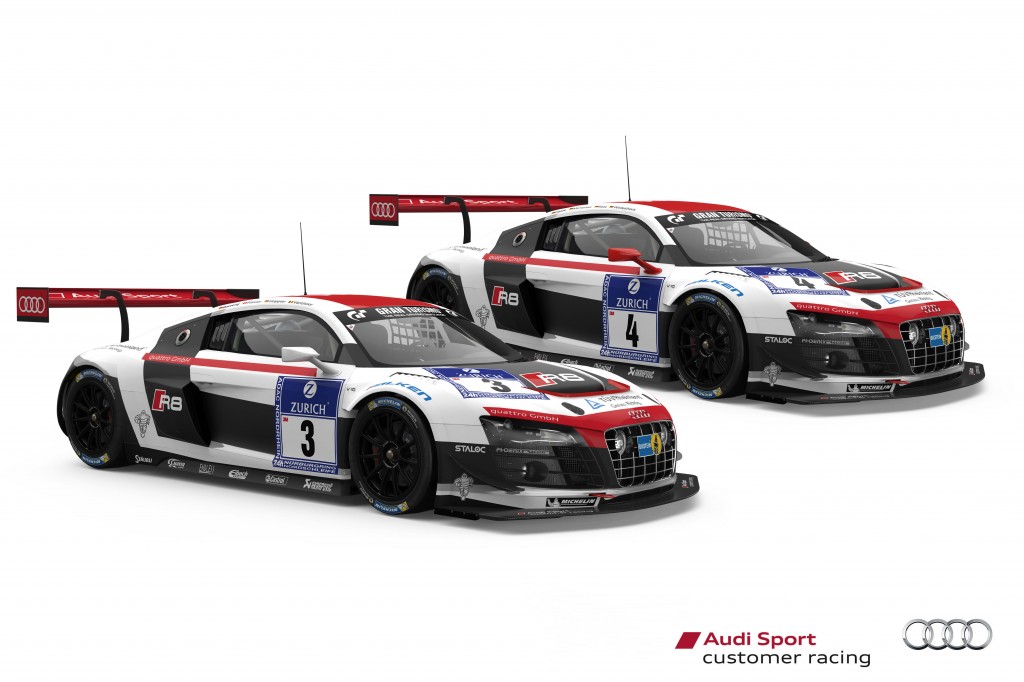 As in previous years, the Audi race experience is fielding two Audi R8 LMS ultra cars in which fast Audi customers are competing together with seasoned race drivers. Ex-DTM driver Rahel Frey is sharing a cockpit with Dominique Bastien (USA), Christian Bollrath (D) and Christiaan Frankenhout (NL). In the second car, record stratosphere jumper Felix Baumgartner (A) is making his debut in the 24-hour race. The extreme athlete, who has been meticulously preparing for his new task during the past months, is supported by the seasoned sports car car campaigners and former Le Mans winners Marco Werner (D) and Frank Biela (D), plus Pierre Kaffer (D).

Entries for a total of 175 cars with about 650 race drivers have been submitted for Germany’s major race, including more than 30 GT3 sports cars. 2014 is seeing several changes. 30 instead of the previous 40 teams will be battling for the best grid positions in the final qualifying session on Friday. For the first time, in the four rounds of the VLN Endurance Championship and in qualifying for the new qualification race in April, 19 teams, including six of the eight Audi R8 LMS ultra cars, were able to secure slots for the top 30 qualifying session in advance. The #4 and #16 Audi R8 LMS ultra cars will be competing for the remaining eleven top 30 qualifying slots in the two qualifying sessions on Thursday night and Friday morning.

Live TV coverage of the race will be provided on Sport1 for more than 15 hours. The YouTube-Channel ADACZurich24hRennen and Fan TV that can be received on location via DVB-T channel 27 will also air coverage of the event. In 2013, seven national TV stations carried reports with a total duration of 29:44 hours. In addition, there were 89:50 hours of international broadcasts by 196 channels. 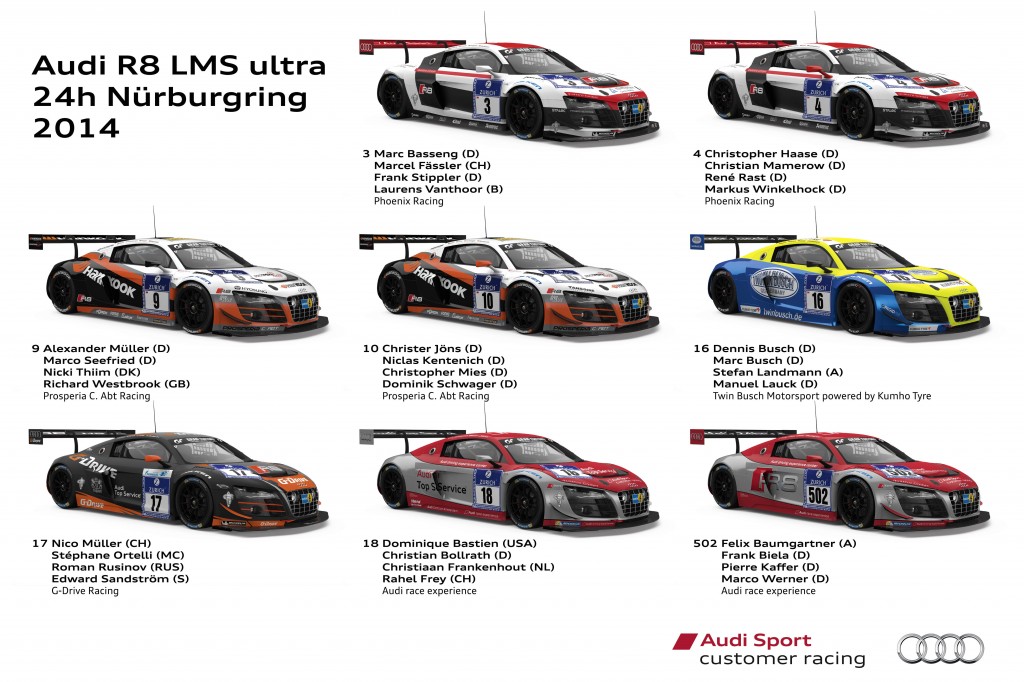 The Audi customer teams in the 2014 Nürburgring 24 Hours

Romolo Liebchen, Head of Audi Sport customer racing: “There can only be one aim for the 24-hour race this year: victory. In addition to two factory-backed Audi R8 LMS ultra cars of Team Phoenix Racing, which are occupied by absolute top drivers, six other, very strong customer cars are on the grid, which are in contention for top positions as well. Audi Sport customer racing will optimally support all teams in their race in the ‘Green Hell’ by customer sport advisors and a supporting infrastructure. After the first VLN races, it’s difficult for me to assess who will be among the favorites. We’re expecting a very close field in which at least 15 cars from five manufacturers will be in contention for victory. But in the end, there’s also a bit of fortune involved in deciding success. We’ve prepared very carefully and are hoping that in the end an Audi R8 LMS ultra will be at the very front.”

Selected quotes from each driver team

Marcel Fässler, Audi R8 LMS ultra #3 (Phoenix Racing)
“Two 24-hour races in a single week are a program of mammoth proportions. After the race at L Mans, I’m immediately going to fly home to recharge my batteries so that I’ll be able to draw on 100 percent of my energy again for the start at the Nürburgring. I started training for this double strike in winter. Our aim is victory. I’m still lacking a triumph in the Nürburgring 24 Hours in my CV, although I came pretty close by taking third place in 2011. The Audi R8 LMS ultra is competitive but our rivals are hard to judge, as many teams traditionally don’t show their full potential in the VLN races.”

Markus Winkelhock, Audi R8 LMS ultra #4 (Phoenix Racing)
“Unlike a sprint race, the 24-hour race is extremely strenuous physically. I prepared for this and specifically worked on my fitness. This is my fifth start in the Nürburgring 24 Hours, so I know the track very well by now. Another positive aspect: In Christopher Haase, Christian Mamerow and René Rast I’ve got three experienced and fast team-mates and in Phoenix Racing a strong team that’s backing us. Our aim again is to clinch overall victory.”

Nicki Thiim, Audi R8 LMS ultra #9 (Prosperia C. Abt Racing)
“Arriving at the 24-hour race as last year’s winner does not increase the pressure on me. But I know how hard it is to win this race. 15 to 20 teams can probably be expected to be in contention for victory. But I’m certain that in my team-mates Alexander Müller, Marco Seefried and Richard Westbrook we’ve got a strong driver squad and in the Audi R8 LMS ultra a good car, and that Prosperia C. Abt Racing is perfectly prepared as well. But it also takes some fortune to win this race.”

Christopher Mies, Audi R8 LMS ultra #10 (Prosperia C. Abt Racing)
“For me, the 24-hour race is a special event. The Nürburgring is my home track. This is where I drove the largest number of races. The atmosphere is tremendous. This is one of Germany’s major races. You can take in a lot of the atmosphere on the Nordschleife in the cockpit. When I drove at night for the first time, I was surprised by the fog wafting across the tarmac until I realized it was smoke from the barbecues. As far as our chances go: I judge the competition to be very strong. But at Prosperia C. Abt Racing we’ve got two Audi R8 LMS ultra cars occupied by seasoned Nordschleife campaigners.”

Dennis Busch, Audi R8 LMS ultra #16 (Twin Busch Motorsport powered by Kumho Tyre)
“For our team, this is the second 24-hour race at the Nürburgring with the Audi R8 LMS ultra. My brother Marc and I’ve been driving on the Nordschleife since 2007 and in Manuel Lauck and Stefan Landmann we’ve been able to gain two other experienced Nordschleife drivers. We’re hoping to get through the race without any incidents this year, and if that’s the case a place in the top ten would be our goal.”

Nico Müller, Audi R8 LMS ultra #17 (G-Drive Racing)
“The contrast to the DTM is stark. This is my first 24-hour race and the Nordschleife is new for me. It’s not only long but also extremely demanding and you’ve got to slowly explore your limit. I feel very comfortable in the team of G-Drive Racing. Stéphane Ortelli knows the Audi R8 LMS ultra well and Edward Sandström is giving me valuable tips about the track. As Stéphane and I’ve got only little Nordschleife experience I don’t see us in the role of favorites. But if all goes well we’ve got good outsiders’ chances.”

Rahel Frey, Audi R8 LMS ultra #18 (Audi race experience)
“This is my second 24-hour race with the Audi race experience. I’d like to convey the fascination of Audi to the customers and accompany them in this race. My team-mates have already driven two races and are looking forward to this run. We’re realistic: for us, it’s about finishing and experiencing a nice race. But personally I’ll of course be pleased if I can drive a fast race lap now and then or put our Audi R8 LMS ultra in a forward position in qualifying.”

Frank Biela, Audi R8 LMS ultra #502 (Audi race experience)
“This race is truly a challenge for all drivers – be they seasoned campaigners or rookies. The demands made on the drivers and cars are massive on a track of more than 25 kilometers. I’m eager to see Felix Baumgartner’s run. He’s shown outstanding performances in other sports and meticulously prepared for this race but is still relatively new in motorsport. In Marco Werner and Pierre Kaffer I’ve got two team-mates I know well. If all goes well, a top-ten result would be a great thing.”