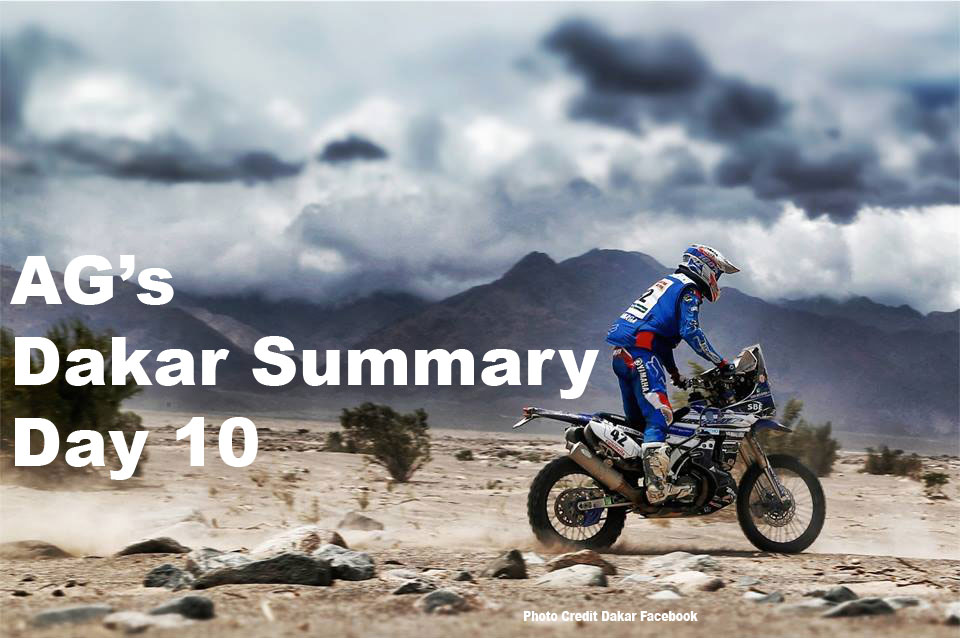 If you’re behind, you can find the Day 9 update here. Stage 10 was a mix at the front. Instead of all quads and bikes, then cars, then trucks, it is going to be something like the top 10 bikes, top 10 cars, top 5 trucks, THEN the rest of the bikes, quads, cars trucks. I don’t know why. They’re calling it a super special. It’s the most duney-section of the race. Here’s a picture of the start order, note the gaps: 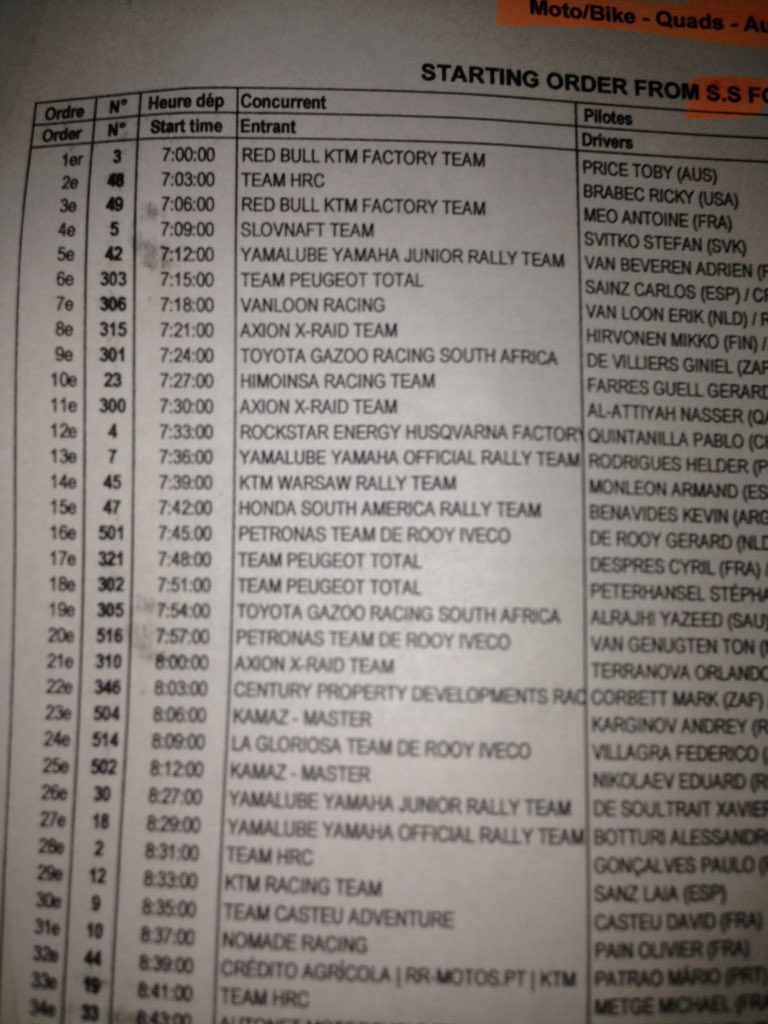 Rally is just rally. It’s not all glamorous all the time. Here’s the overnight ferme spot. It’s just a basketball court: 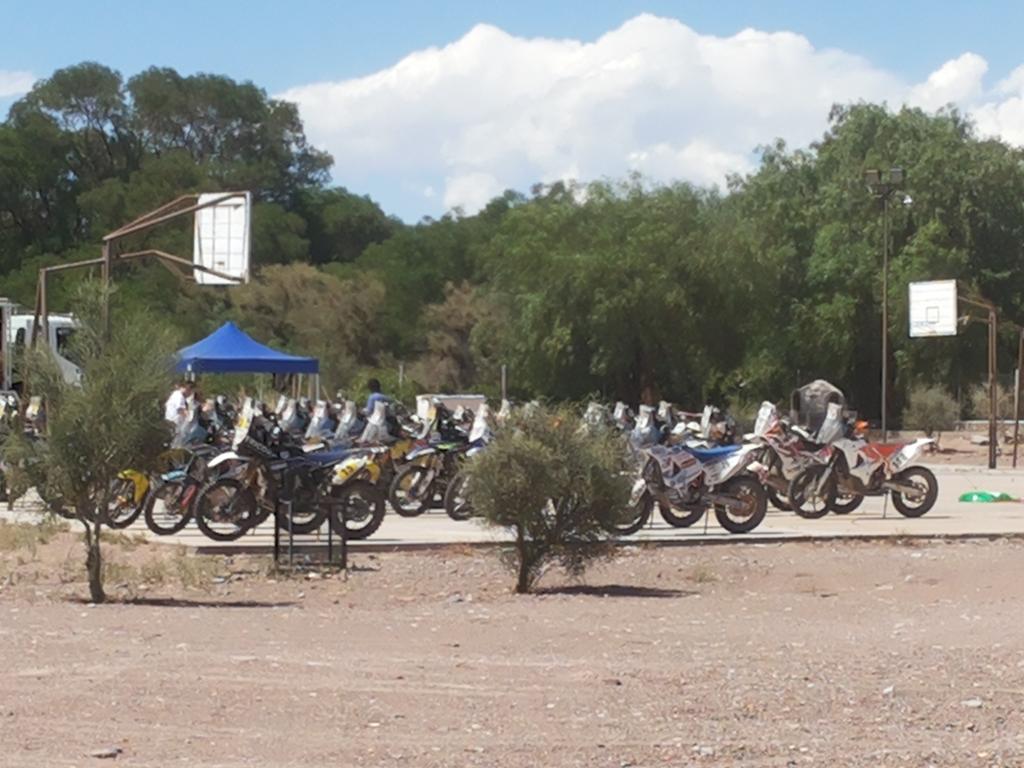 Interestingly, for the Minis, in temperatures over 100F the AC is disabled. So they just don’t get AC on the hottest days. 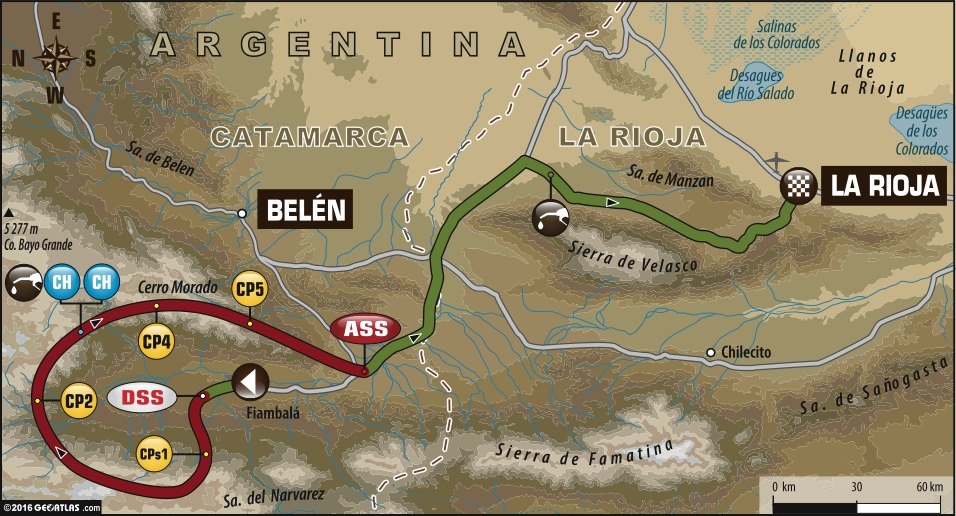 Tom Coronel in that wacky little single seater buggy is still soldiering on!

Bikes at the top are KTM, Honda, KTM, Husqvarna, Honda. That’s a great mix of manufacturers.

The start of today’s special has been delayed as a result of the thunderstorms that swept the area last night. A swollen río in the first timed sector has become impassable. It took about 45 minutes to wait it out and go.

Toby Price opens the stage and takes a bit of an alternate route. Everyone else falls in line and follows. When you’re making the line, you’re controlling the race.

Cyril Despres and Stéphane Peterhansel have overtaken Gerard de Rooy after CP1. The Peugeot duo started behind the leader of the truck classification this morning.

Laia Sanz looks like she got on the unlucky end of the previous stage adjustments, and on top of that has a slow time over the first couple checkpoints. 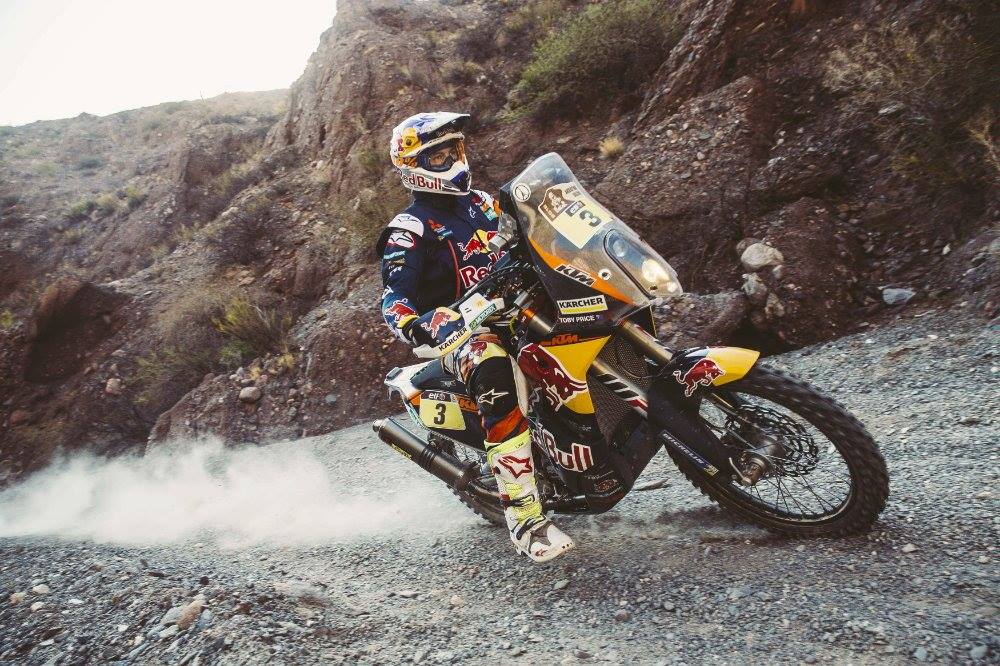 Despite some navigational trouble at the beginning of the special, Carlos Sainz (Peugeot) is setting an infernal pace. He flew past CP2 with a lead of more than 7 minutes over Giniel de Villiers (Toyota).

Gordon does well, 15th on this stage.

Loeb is hilarious: “No good news. I’ve got to get used to this. I’m not really enjoying hitting everything that gets in my way.”

CR Gittere, our American RallyMoto racer, is out. No details other than ‘He is ok’ yet. For Dakar, ‘ok’ means “He’s OK and being taken care of at the hospital in Fiambla.” Awesome feat to make it this far though! 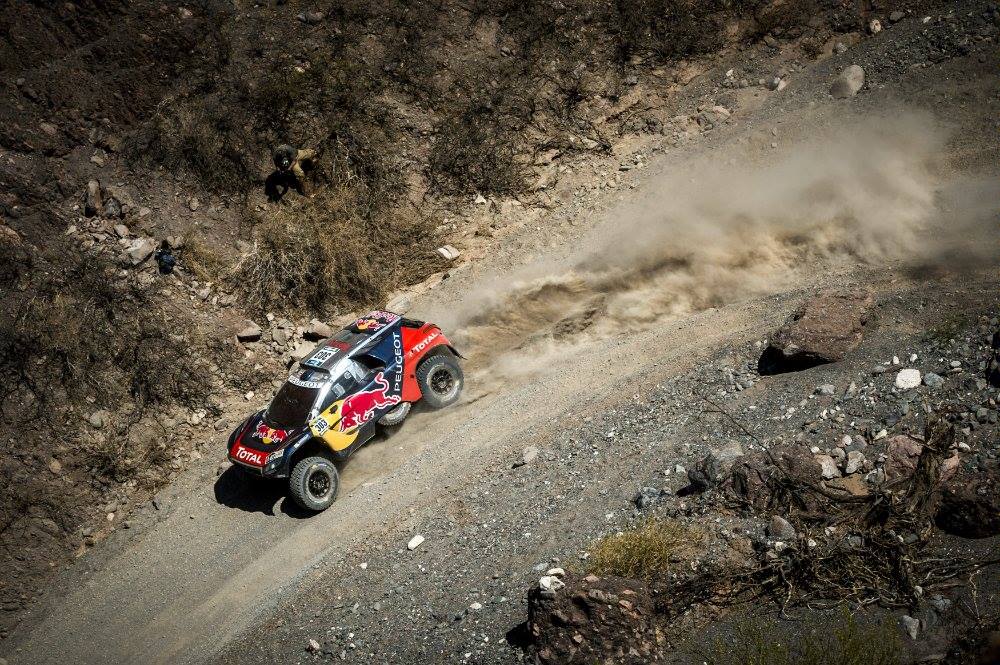 Floods in the desert? Scary. Take a look at these videos posted today. It’s Kuba Piatek trying to cross:
http://motormania.com.pl/sport/offroad/cross-country/film-z-wypadku-kuba-piatek-rwaca-rzeka-z-wodospadem-i-dzielni-kibice/

Flashback Two: lots of controversy on the stopped stage, both the reasoning for stopping, and the handling of the times. According to FIA Rally Raid rules, you can’t just take everyone’s split time at an early checkpoint if some people have finished. Final score for that day is still evolving. First it was CP2. Then CP1. Now looks like the finishers get their times, and penalty times for the remainder.