This is what it looks like to race at the Nurburgring. It’s a day by day from the viewpoint of Leeh Keen during the 2013 24hrs of the Nurburgring. From waking up in his hotel, to walking thru the paddock and out to pit lane. To watching the GPS maps of the cars lapping the track while having a snack, to strapping in and pulling out of pit lane onto the greatest racetrack in the world. Then to qualifying… and problem occurs. Leh pulls in behind the armco and resets an electrical switch under the hood and continues to qualify! This is as close to what its like to be a pro driver on a race weekend that I’ve ever seen. 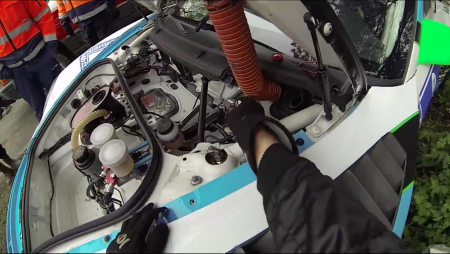 Then we go to raceday. The track is packed and laps are fun to watch. Until the rain sets in. At first its like ok cool, this will be interesting. Then he keeps pushing. And it keeps raining. And he keeps pushing. You wonder why they stopped the race? Because drivers are drivers and they won’t stop trying to go faster than the next guy. His final lap before the yellow is madness. Tons of opposite lock and passing cars everywhere. Easily one of the best in car videos of all time. Enjoy!