In February 1966, Ferrari débuted a new sports-racing car formulated for the FIA’s 2-litre Group 4 class, with hopes of winning over the numerous privateer teams that campaigned in Porsches. Dubbed the Dino 206 S, the car was powered by the development of the 65 degree V-6 engine that had been conceived by Dino Ferrari, prior to his death in June 1956. 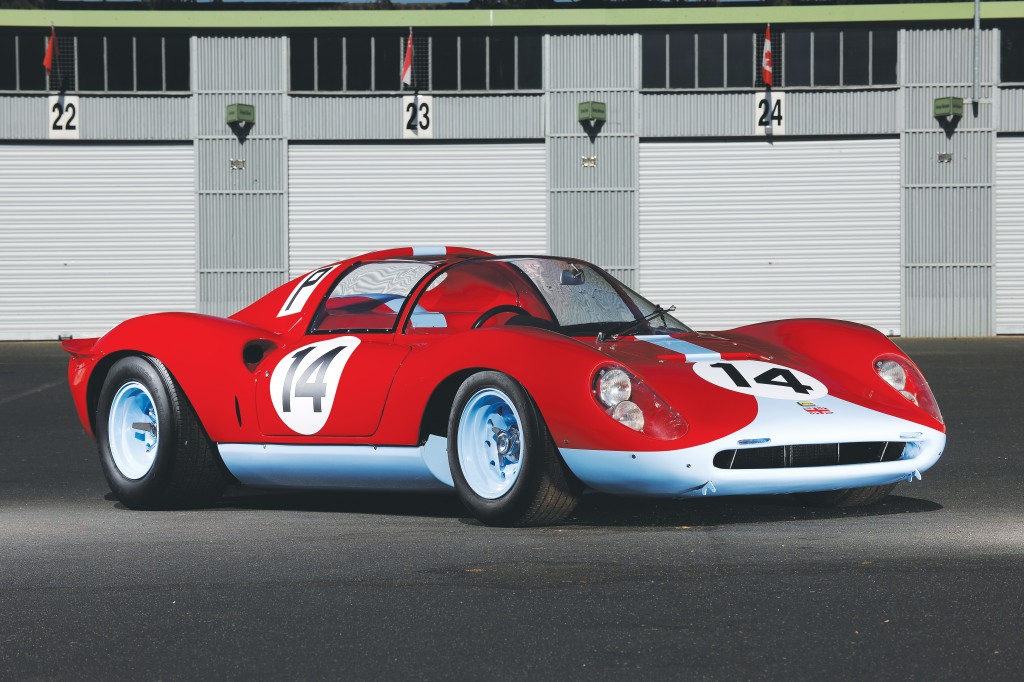 Originally co-engineered by legendary Alfa Romeo designer Vittorio Jano, then working as a consultant for Ferrari, the Dino V-6 motor was badged with a hand scripted autograph based on the younger Ferrari’s signature. Though it was introduced as a Formula 2 powerplant, an enlarged version of the engine was subsequently used in the Formula 1 cars, carrying works driver Mike Hawthorn to a Driver’s World Championship in 1958. Whilst Ferrari’s Formula 1 cars of the early-1960s increasingly adopted 120 degree V-6 engines designed by Technical Director Carlo Chiti, the Jano-engineered 65 degree Dino engine was, nonetheless, consistently enlarged and developed in various experimental sports prototypes, including the 246 SP, the 206 SP, the 196 SP and the 166 P. 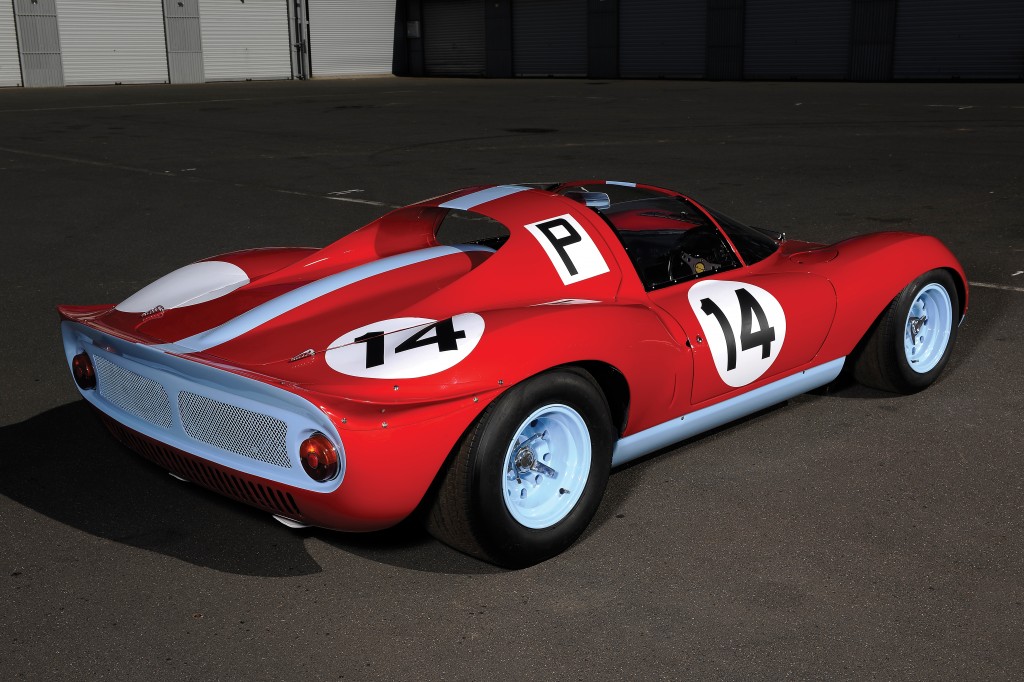 Introduced for the 1966 racing season, the Dino 206 S appeared to be a scaled down version of the revered 330P, even wearing similarly ravishing coachwork care of Piero Drogo’s Carrozzeria Sports Cars in Modena. The visual appeal of Drogo’s aerodynamic body shell, which featured a combination of stressed alloy panels and fibreglass over a welded tubular semi-monocoque, was beautifully complemented by the Dino V-6’s fierce performance. By the end of the 1966 race season, the 206 S had proved its mettle, earning a 2nd place finish at the Targo Florio, 2nd and 3rd at the Nürburgring and a 6th place finish at Spa. Although the 206 S was originally slated for a homologation of 50 examples, labour problems prematurely interrupted production after only 18 cars had been assembled, and the model, therefore, remains a rare and important milestone in the arc of the Dino race car’s development, as well as a cornerstone of the Ferrari road cars that followed. 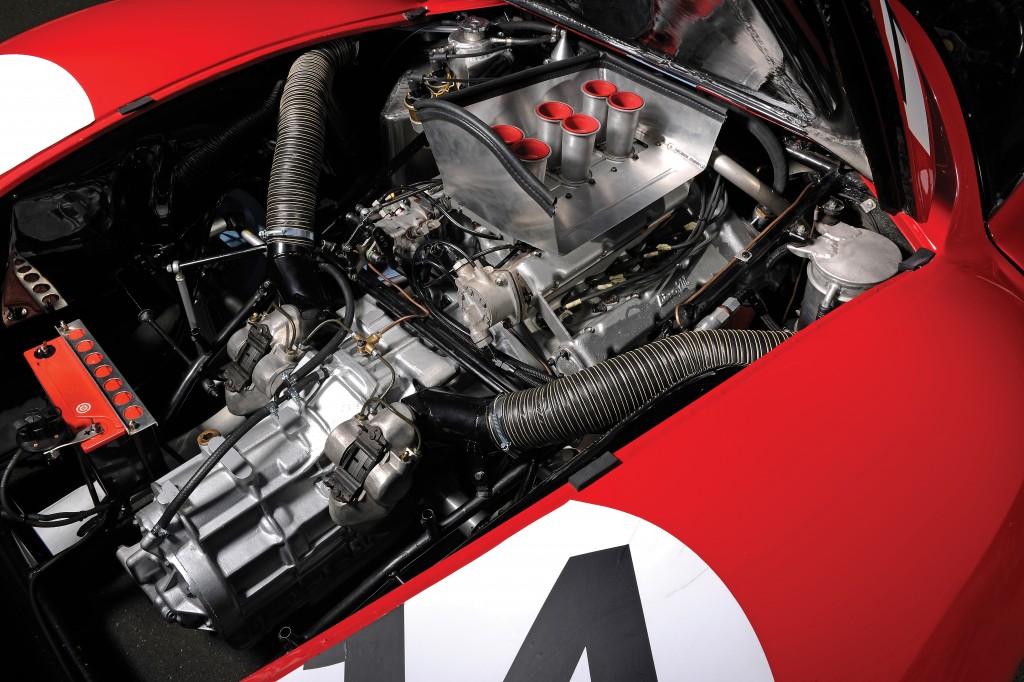 Excluding the Factory Works prototype, this beautifully restored 206 S is just the third example produced. This car was initially purchased on 23 April 1966, by Colonel Ronnie J. Hoare of Maranello Concessionaires Racing Team of Egham, Surrey, England, an authorised Ferrari dealer and racing concern originally founded by champion driver Mike Hawthorn. Finished in Ferrari Racing Red with the recognisable Maranello Concesionairs blue stripe, 006 made its competition début at the RAC Tourist Trophy in Oulton Park, England. Renowned British driver Michael Parkes was behind the wheel, with number 42. Unfortunately, the car had to retire early with final drive issues, but it still placed 21st OA. 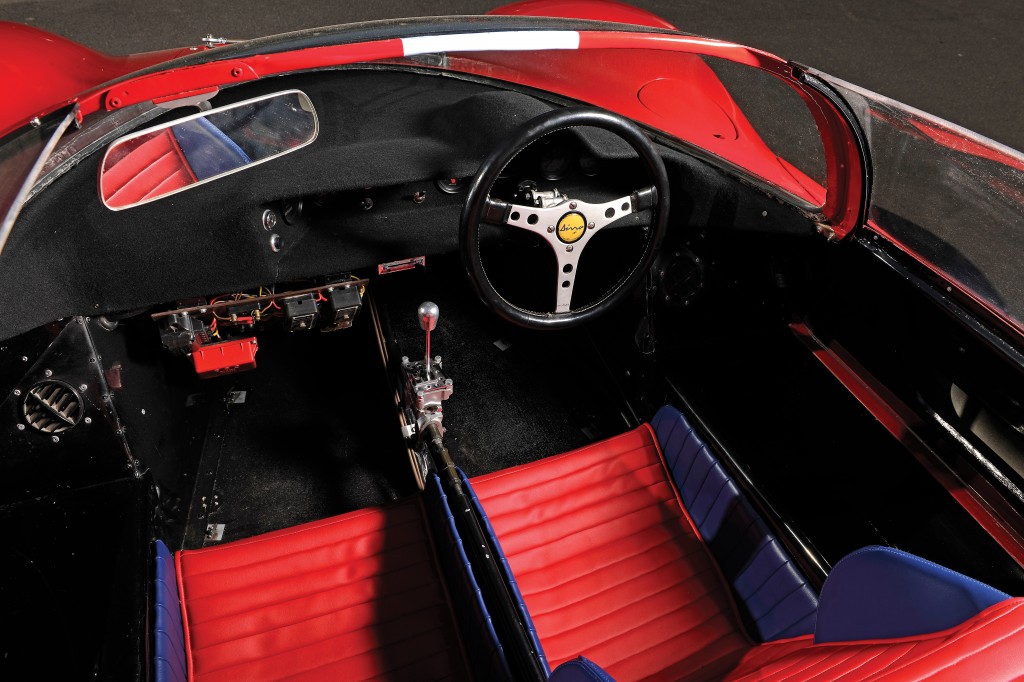 The following June, 006 started 12th on the grid at the 1,000 Kilometres of Nürburgring, piloted by two of the most famous British drivers, Richard Attwood and David Piper. By lap 28, the car had advanced to 5th in class and 8th place overall before retiring early due to mechanical issues. These teething problems led to further refinement of 006, resulting in its best performance yet at the British Grand Prix at Brands Hatch, where Mr Parkes drove the car to 6th place overall and 1st in class. 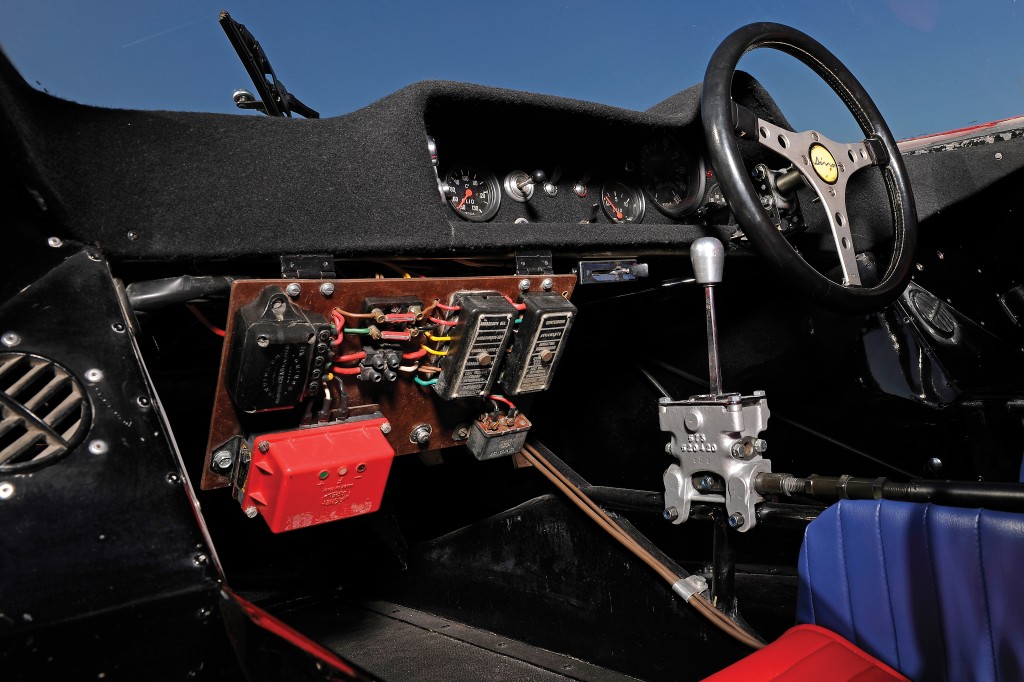 In August 1967, Maranello Concessionaires sold this Dino 206 S to Gustaf Dieden, through Tore Bjurstrom, the official Ferrari concessionaire of Sweden. The correspondence between Colonel Hoare and Thomas Bjurstrom is very well documented, with letters on file from the Maranello Concessionaire archive. Hoare noted, “I am delighted to hear that you have decided to buy my Ferrari Dino 206/s 006”. After briefly campaigning the Ferrari on the Knutstorp circuit, Dieden competed in a total of six local races, five in Sweden and one in Denmark. After an off-road excursion at Knutstorp, the car was returned to the factory to be repaired, as the left front corner had been damaged. 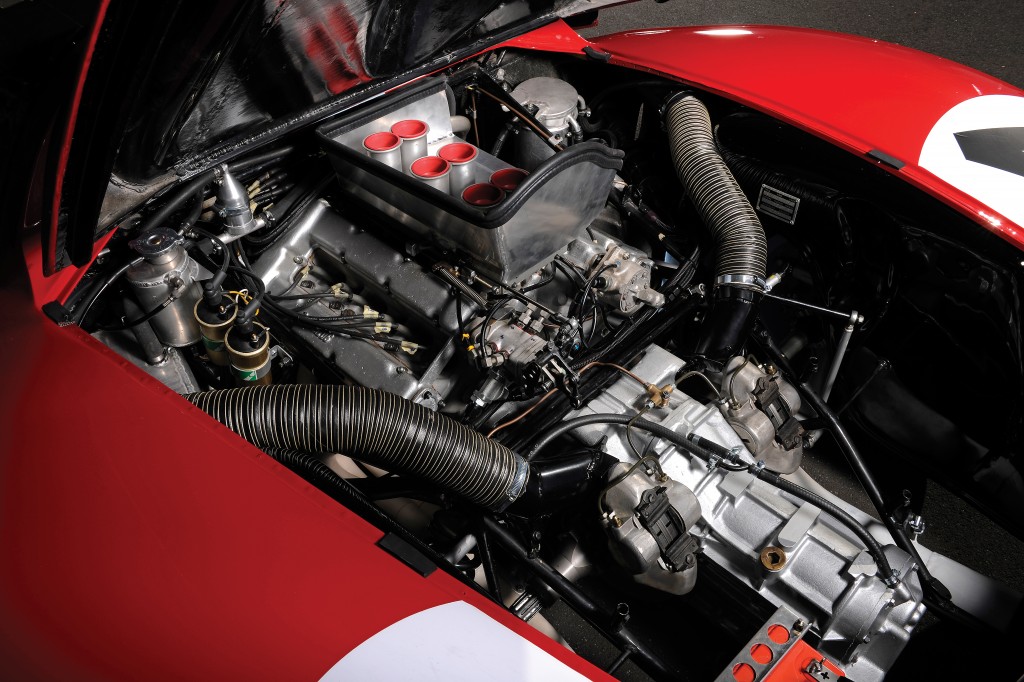 Mr Dieden subsequently advertised the car in Road and Track, with the advert reading, “This fabulous sports racing car was built in Autumn 1966 but modified to works specification at Maranello works during the winter, 1967. Only raced five times by a novice, and it is in beautiful condition throughout. This car is absolutely race ready”. The car was bought by Hans Wangstre of Malmo, Sweden, who brought in driver Evert Christofferson as a co-owner. Under the name Team Bam-Bam, Mr Wangstre and Christofferson campaigned chassis 006 in numerous international venues over the following year, such as the Hockenheimring in Germany and the ADAC 1,000 Kilometres of Nürburgring. Highlights of this period include a 15th place finish at the Good Friday Meeting at Oulton Park on 12 April 1968 and a 22nd place finish at the Targa Florio on 5 May. 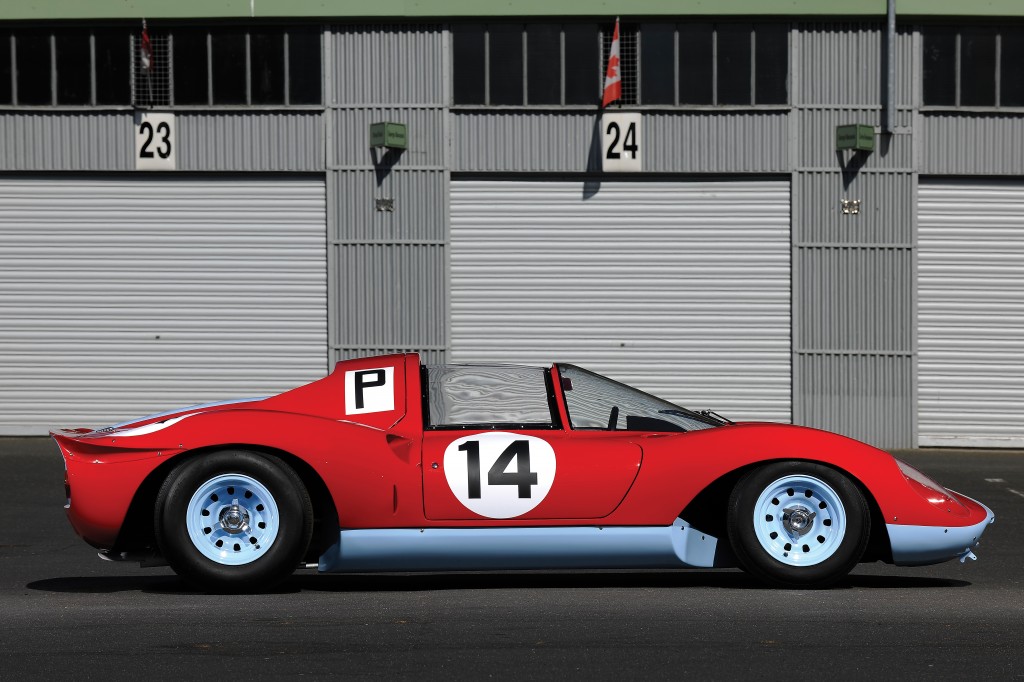 In 1969, chassis 006’s legendary Dino V-6 finally succumbed to the rigors of racing, a common problem that was due to the imbalance of the crank shaft. As an identical replacement block was deemed to be too expensive for a car that was increasingly dated from a competition standpoint, an experimental Volvo B20 engine was installed, and the car’s racing career effectively ended.