012I is one of the most charismatic Ferraris we’ve had the pleasure of representing. This very early example was the ninth Ferrari built, according to the chassis sequence, and the sixth of the extremely competitive 166 (two-litre) Spyder Corsas. It was a potent weapon, regularly discharged in capable hands and its racing record is illustrious, certainly equal to or exceeding all 166 SCs. 012I’s career was punctuated with numerous upgrades to its drivetrain and coachwork to remain competitive. 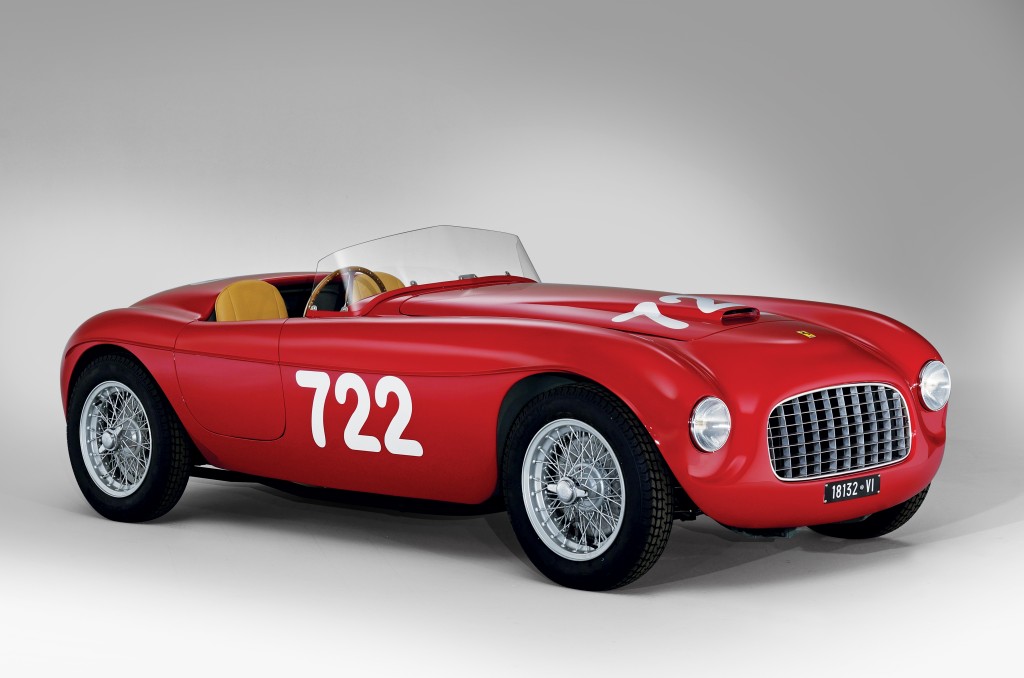 012I began its ‘life’ as a 166 Inter with cycle-winged bodywork by Ansaloni, one of the factory race cars to become known as ‘Spyder Corsas’. Completed in May, 1948, it just missed entry into the 1948 Mille Miglia, alongside its sister car, 010I, driven by Tazio Nuvolari. Under the Scuderia Ferrari flag, 012I was first deployed as a Grand Prix racer in the Bari GP, piloted by Ferdinando Righetti. Next came the Jun Mantua, (Giampiero Bianchetti), then on to the Pescara GP, where Count Bruno Sterzi garnered the car’s first podium trophy, finishing an impressive second overall. More success was to come at the Coppa d’Oro delle Dolomiti, with Sterzi finishing ninth overall with co-pilot Enzo Monari. This event was the occasion of 021I’s first engine transplant (believed to be 022I, now in the first Barchetta, 0002M). Thereafter, in the car’s inaugural season, factory driver Giovanni Bracco brought further victories to Ferrari in hill climbs, starting with the Coppa d’Oro Dolomiti and the Rocco di Papa Hill Climb, where Bracco achieved an astonishing first place overall, winning the Gallenga Cup. 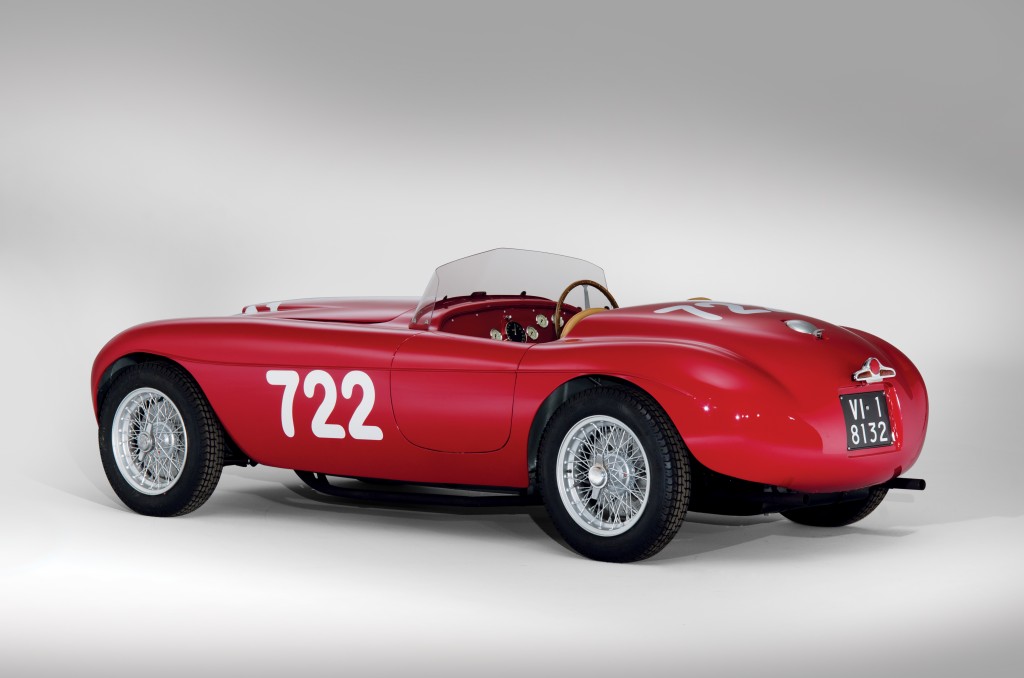 It was thus that Giovanni Bracco, an impatient young man from Cossila, Italy became the first ex-factory owner of 012I in early 1949. Bracco was an extrovert who loved food, women and the high life. After the death of his father, Bracco discovered a talent for road racing and did so with a passion. His motto was, famously, “Either it goes or I crash it”.

Bracco and 012I competed in at least 13 different races in 1949, though not without some sweat and frustration. The Ferrari motor from 1948 required, as it was once said, acrobatic feats to operate. In those days, racing fuel was a blend of gasoline and alcohol. Once started, one had to lick a finger and touch the exhaust manifold to verify that all 12 cylinders were firing correctly. After bringing the motor up to temperature, it was necessary to change the spark plugs–not an easy task. As a result, 012I became known as “Il Chiodo di Bracco”, or just “Chiodo” (literally meaning “nail”). With at least 13 recorded entries, Chiodo was remarkably active in Bracco’s hands in 1949, sometimes co-piloted by Ferrari Grand Prix driver, Umberto Maglioli. 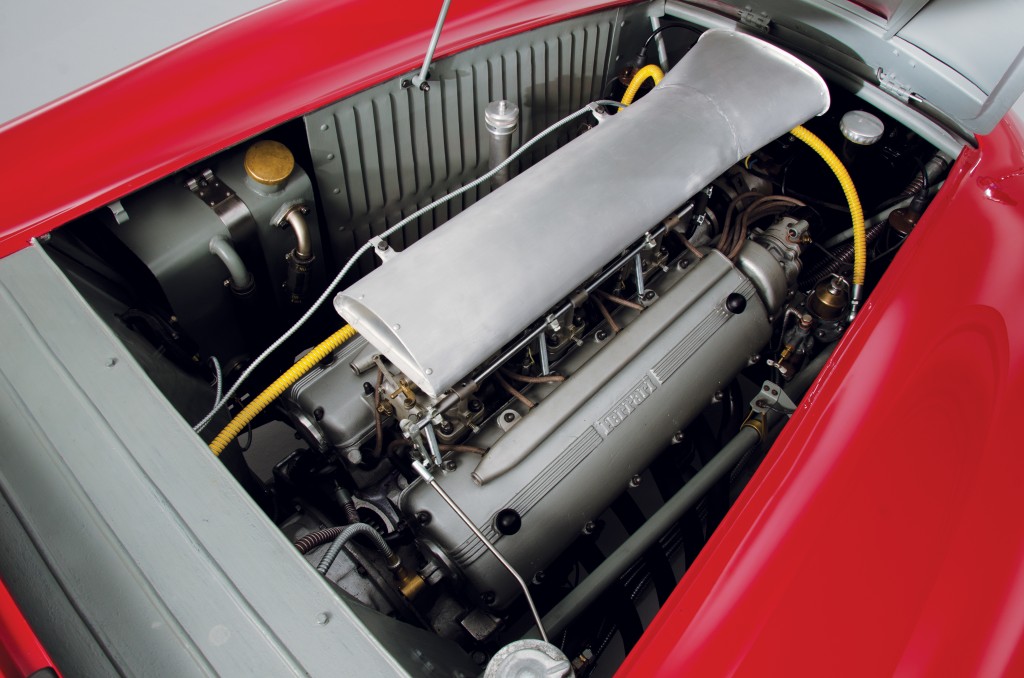 Bracco and Maglioli’s first race together was in the Giro di Sicilia, followed by entry into the Mille Miglia (24 April, 1949), with Bracco finishing sixth overall in the Grand Prix di San Remo in between.
Though he raced in Grand Prix and endurance road races, such as the Mille Miglia, with Chiodo, it was his mastery of the hill climb that earned him the title, “Il Re di Montagna”, King of the Hill, for 1949. Bracco took first place overall at Como-Lieto Colle and again at the Corsa al Brinzio, both in May of that year. No fewer than five further hill climbs were contended with Bracco in Chiodo that year, every one a podium finish, including yet another first place at Pontedecimo-Giovi. For this remarkable effort, Bracco officially became the 1949 Italian Hill Climb Champion.

A footnote here opens a particularly interesting chapter in motorsport history, with Ferrari’s contribution to another racing dynasty. At the conclusion of the 1949 season, Count Vittorio Emanuele Marzotto acquired Chiodo from Bracco for a reputed one million lire, the first Ferrari of a long line that were to become part of Scuderia Marzotto, established by the five dashing and adventurous sons of textile mogul Gaetano Marzotto. The car was re-registered by its second owners, the Marzottos, with Vicenza plates ‘VI 18132.’ 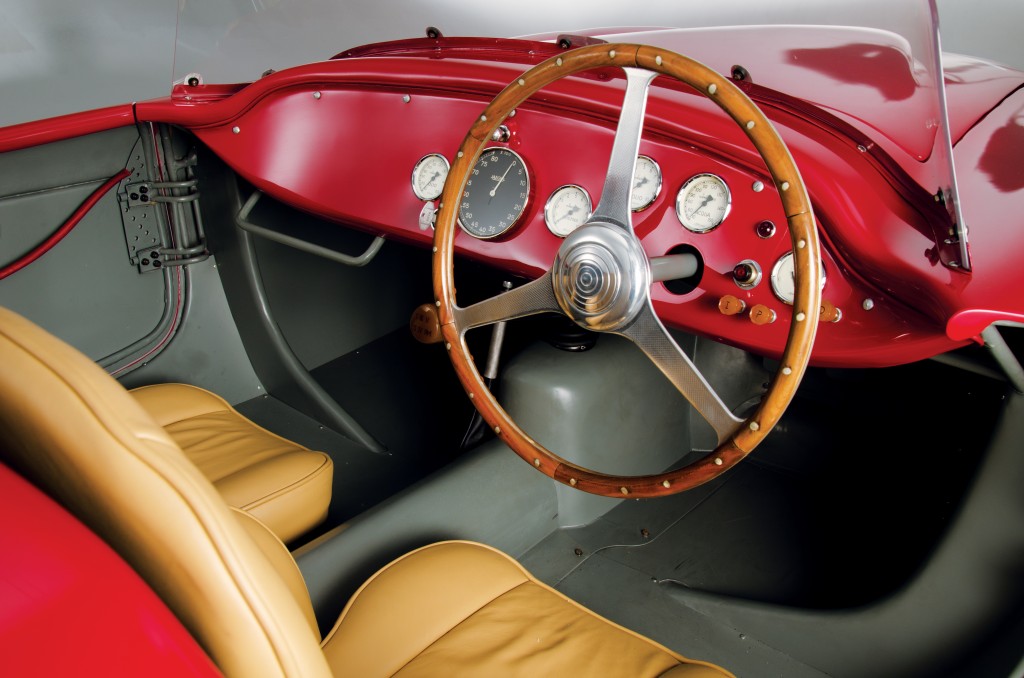 Being courtesans by trade, the Marzotto brothers were famous for ‘re-clothing’ the cars in their stable, as routinely as some of us might change our jacket. Deciding that Chiodo was too “Nuvolari” in appearance, the Marzottos commissioned a re-body that was termed “Spyder da Corsa Ferrari projecto Mille Miglia 1949”, or as we now know it, a Barchetta. Entrusted to Carrozzeria Fontana, this initial collaboration emulates the popular design of the Touring-bodied Ferrari, the legendary 166 MM ‘Barchetta’ (little boat). It is this variation from original that has survived, remarkably intact, through the present day.

Fontana’s homage to the Touring Barchetta was fresh and attractive, with Chiodo’s new wrapper an arguably more graceful execution than the well-known Touring version. Aside from its longer, more seductive rear profile, notable dissimilarities include lack of a boot aperture, a full width, peaked windscreen and a distinctive aggressive stance.

Wasting no time after completion, Giannino Marzotto entered Chiodo in the 1950 Targa Florio (2 April 1950), with co-pilot Marco Crosara. (Ultimately, they abandoned the race to save the life of their friend and competitor, Fabrizio Serena.)

Soon, however, it was time for the Mille Miglia, this time entered by Vittorio with the car’s designer Paolo Fontana as his co-pilot.

Displaying the now-iconic race number ‘722’, the official entry indicated Chiodo as a ‘Type 195S Barchetta Fontana’ (indicating what is presumed to be another engine upgrade, to 2.3 litres). The result was a stunning ninth overall finish, representing an estimable Sixth in Class, and beating the Ferrari team entries–to the enduring consternation of “Il Commendatore” himself. 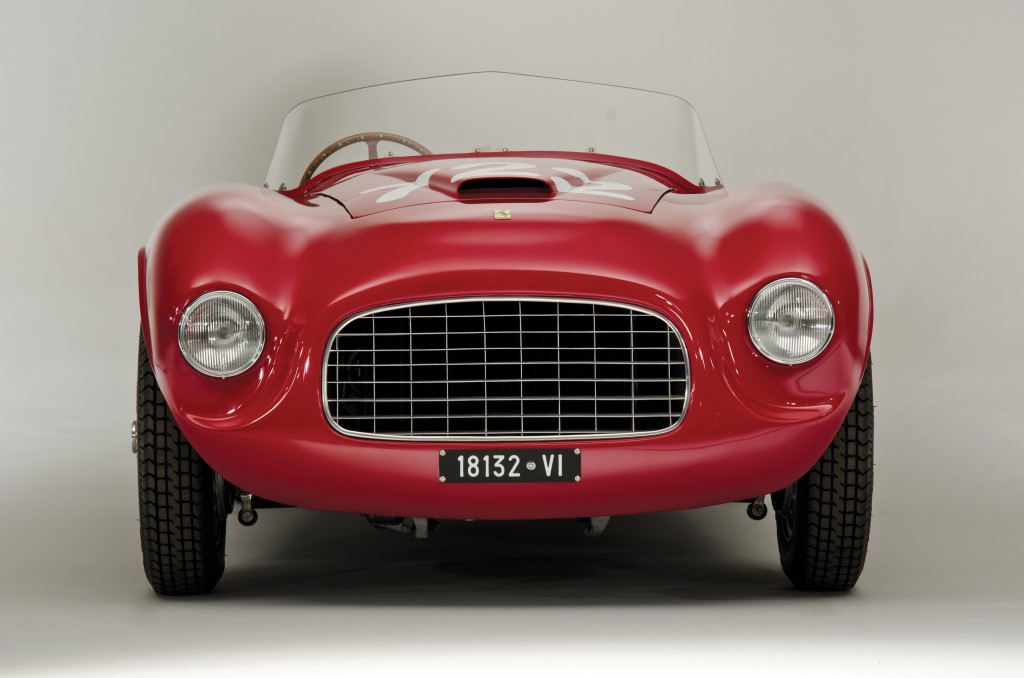 This event may mark the beginning of the love/hate relationship that Enzo Ferrari had with the Marzotto brothers–young men who dared to alter his designs but refused to lose when competing head-to-head with factory entries.

Subsequent to its magnificent performance in the Mille Miglia that year, hill climb champion Bracco was enlisted at least once again, this time to drive the car at the Parma-Poggio de Berceto hill climb, where he again achieved first place overall. This appearance was followed by a hill climb entry by Vittorio Marzotto, where he also finished first overall at the Treponti-Castelnuovo event, sponsored by the Automobile Club di Padova. 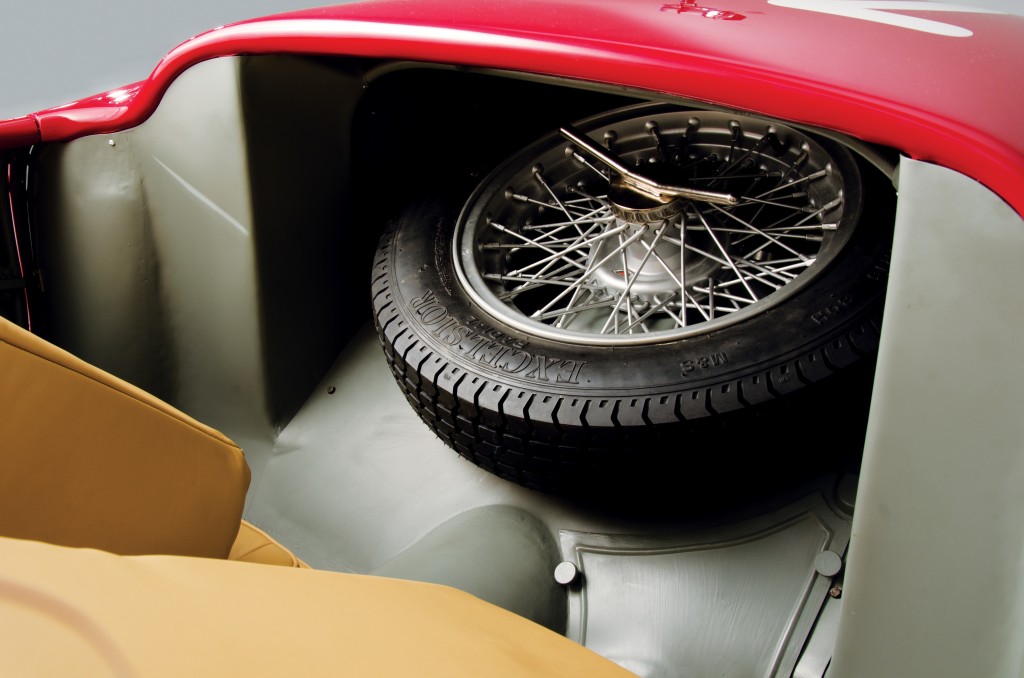 At the end of 1950, the coachwork was modified, yet again, by Fontana for the 1951 season, with the addition of a fastback hardtop, along with the requisite ‘Berlinetta’ fixed windscreen, outside door handles and windscreen wipers, and now liveried in an apparent shade of silver.

By June, 1951, Chiodo was becoming obsolete in racing terms. However, never satisfied to give in to practical realities, the Marzottos pressed on and registered a form for the Italian tax authorities, specifying an increase from 23 to 29 taxable bhp. It is believed that Chiodo ran in August 1951 at the Giro di Calabria, driven by the Mancini brothers (#805), with 2,080 cc, finishing third overall, proving beyond any doubt that it was still competitive after all.

In the next recorded event for Chiodo, Scuderia Marzotto entered the German Grenzlandring with driver Franco Comotti, who placed second overall in September, 1951. This was followed later that month with an entry to the Gran Prix di Modena, where none other than Ferrari Grand Prix champion Froilan Gonzalez (the “Pampas Bull”) placed Chiodo sixth overall for the Marzottos. 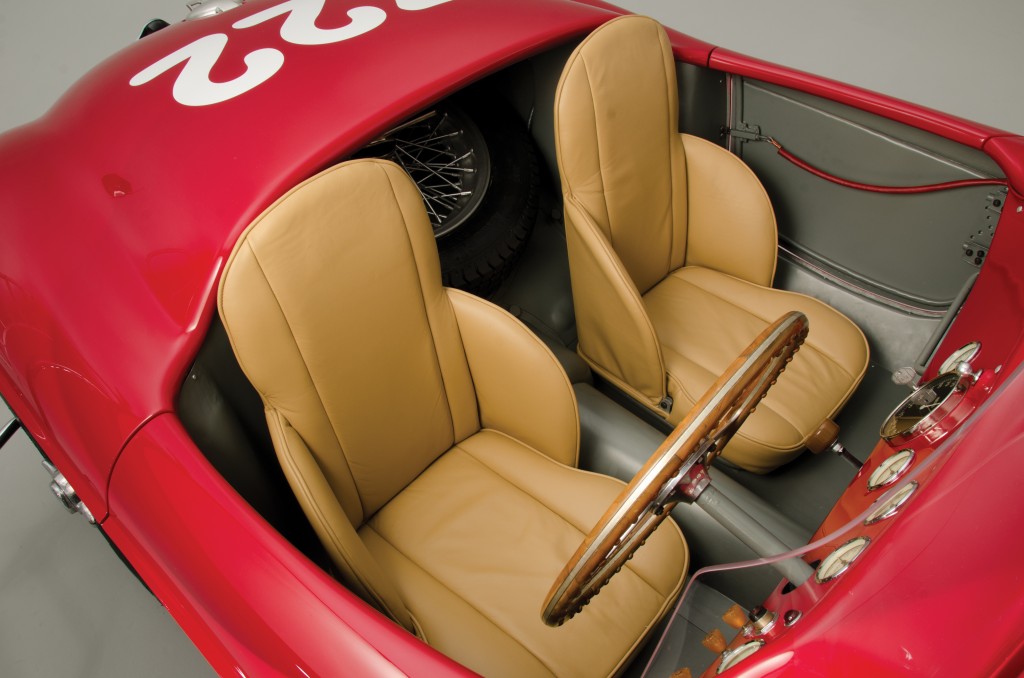 The 1952 season for Chiodo began at the Gran Premio di Siracusa, again with Comotti at the wheel, who placed sixth overall–very respectable for a car now into its fourth year of competition. Comotti, yet again, was chosen to pilot the car at the Grand Prix of France at Montlhéry (DNF).

Remaining with Suderia Marzotto until the team’s liquidation in 1953, Chiodo was sold to Ferrari test driver Martino Severi, in a package with nine Ferraris, their transport truck and “a mountain of parts”. This lot was thereafter dispersed with some of the cars sold to the Mancini brothers of Rome, where Chiodo was likely utilised within the network of famed elder gentlemen drivers known as “The Roman Racers”, including Serina, Taraschi, Matrullo and Raffaeli.

As a final act of fate, it is said that Giannino Marzotto was approached for financial support by a broke and anxious Enzo Ferrari, circa 1953. Giannino agreed to invest, and Ferrari received its new lease on life to the great relief and benefit of automobile enthusiasts. The Marzottos’ contribution to the Ferrari legacy cannot be overstated. 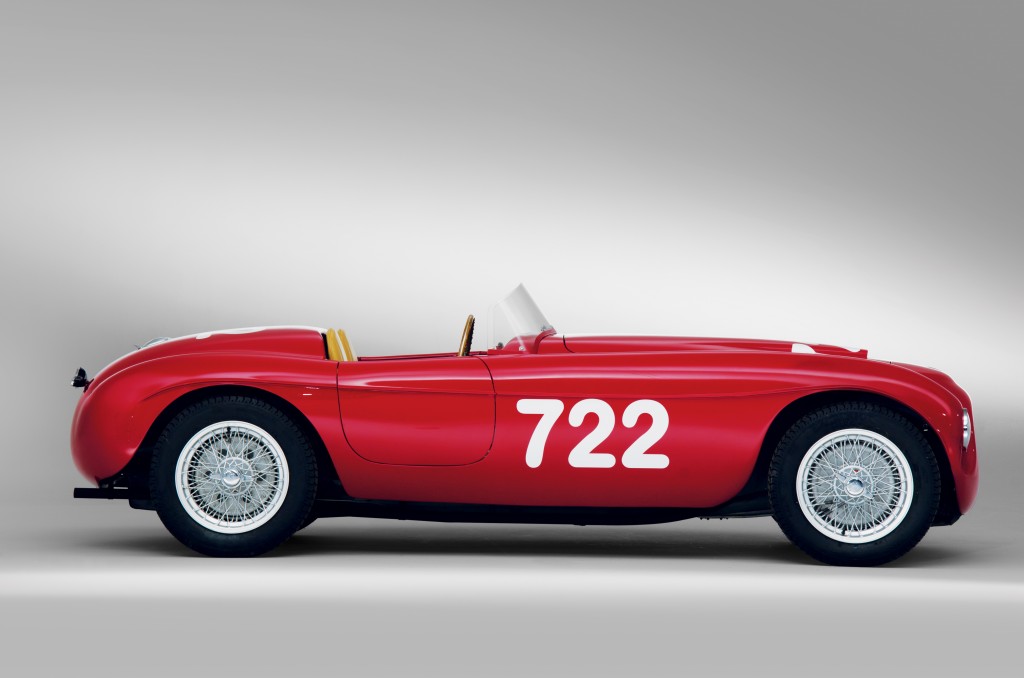 The last recorded competition entry for Chiodo was as a Targa Florio entrant in 1955, in the hands of aging Roman racer Francesco Matrullo, in his last known race. A thrilling coda for Matrullo one imagines, but finally, Chiodo was, officially, no longer competitive. Interestingly, and documented by an event photograph, Chiodo now had a shortened wheelbase, reduced by some 150 mm. One can only speculate the reasons why, but as a warrior with an eight-season racing career, including noteworthy success as a hill climb champion, a shorter wheelbase might have provided some handling advantage on twisty ascents.