The vehicles for Delahaye’s new direction were the Superluxe and its sports sibling, the Delahaye Type 135. The Superluxe’s and Type 103’s engine, a long-stroke, pushrod-operated overhead valve, four-main-bearing F-head inline six, was designed by Jean François, under the direction of Delahaye’s technical director, Amédée Varlet, and it would become one of the most versatile, long-lived engine designs in history. 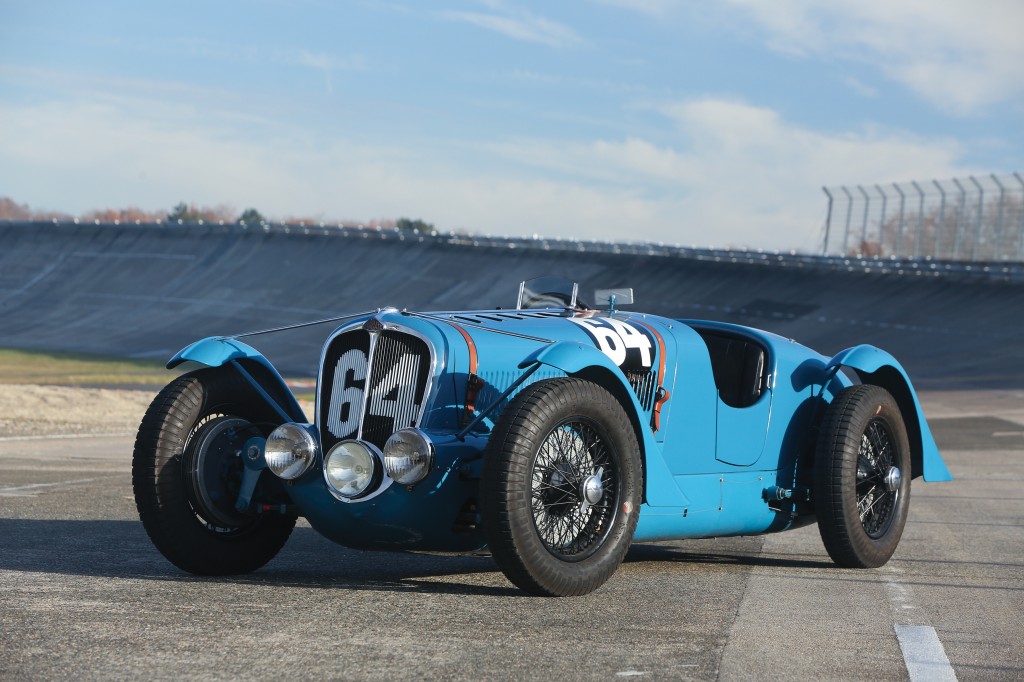 At the same time, Delahaye engineer Jean François was hard at work on a new chassis, the Type 135, to complement the more powerful engine. The chassis was a particularly advanced assembly for its time, with boxed rectangular rails, a central crossmember, and a welded-in floor, which contributed to additional stiffness and rigidity. The front suspension was independent, using its transverse leaf spring as the lower control arm. 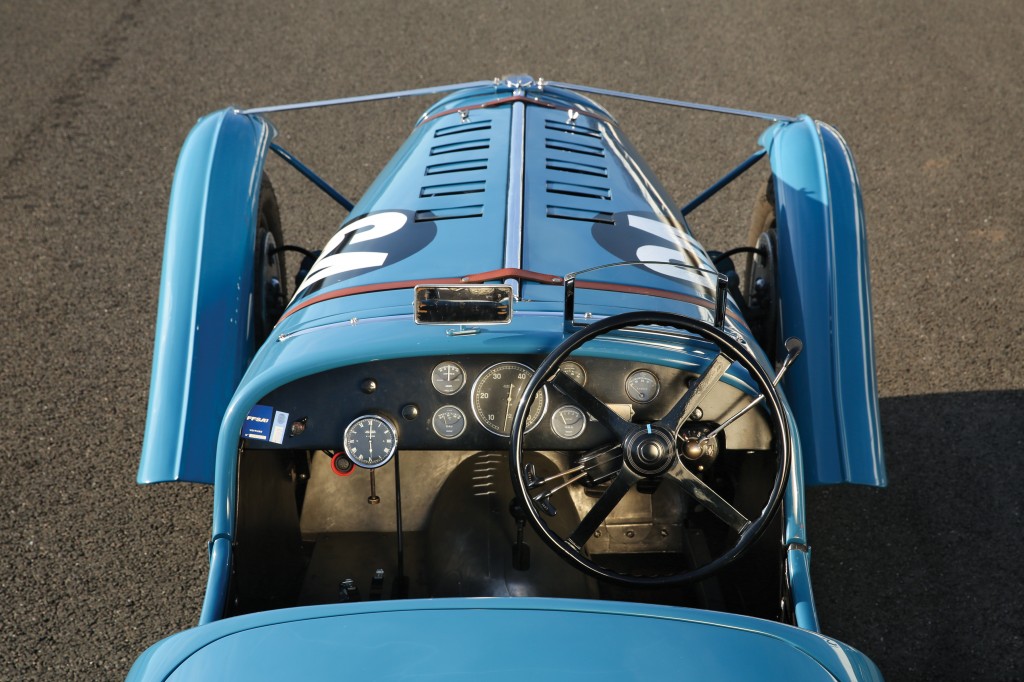 Introduced at the 1953 Paris Salon, the road going version of the Type 135 was offered with two engine sizes and two aspiration options, yielding a choice of 95 horsepower, 120 horsepower, and two 110 horsepower configurations. The competition prospects for the Type 135 were embodied in a fifth model, the short-wheelbase Delahaye Type 135 Special that had a 3,557-cubic centimetre engine with triple carburettors, which could produce 160 horsepower. The Type 135 Special was more than just highly tuned, as it also featured additional engine block cooling passages, a lighter and better balanced crankshaft that was capable of higher rpms, an 8.4:1 compression ratio cylinder head, a modified valve gear, and a high-lift cam. It breathed through three horizontal Solex carburettors and had six exhaust ports with individual exhaust header pipes. 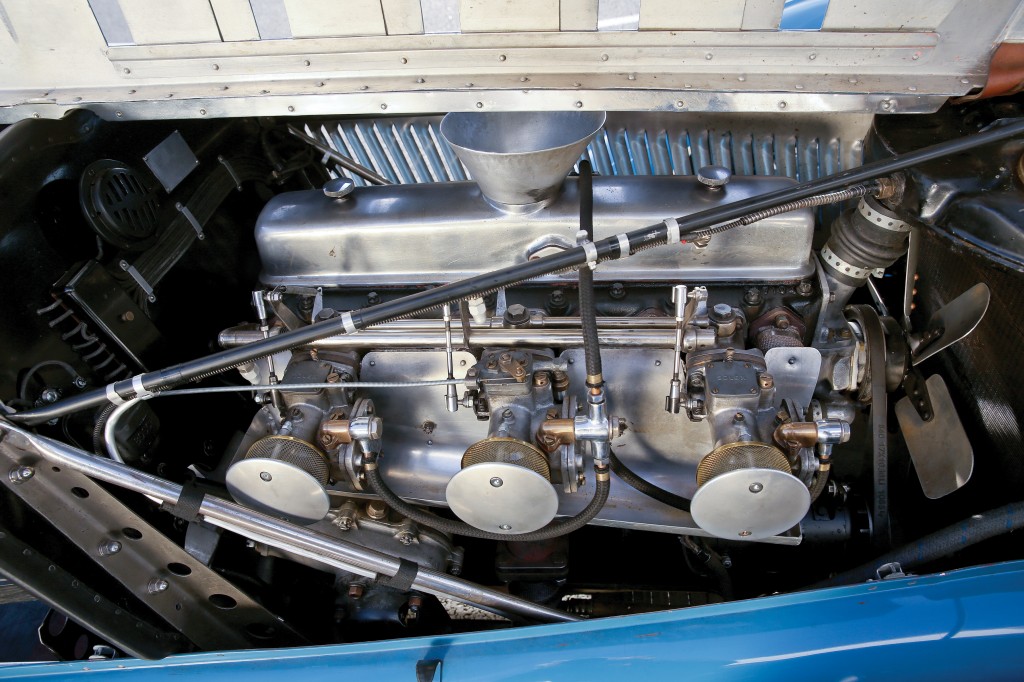 All the Type 135 Specials were bodied with similar lightweight, two-seat coachwork with removable teardrop wings, making them acceptable in both sports car and grand prix competition. They were aggressively functional, gracefully styled, and effectively aerodynamic, and their rugged, naturally aspirated engines and dual-purpose functionality made the Delahaye Type 135 Special the ideal race car for the 1936 French racing season. 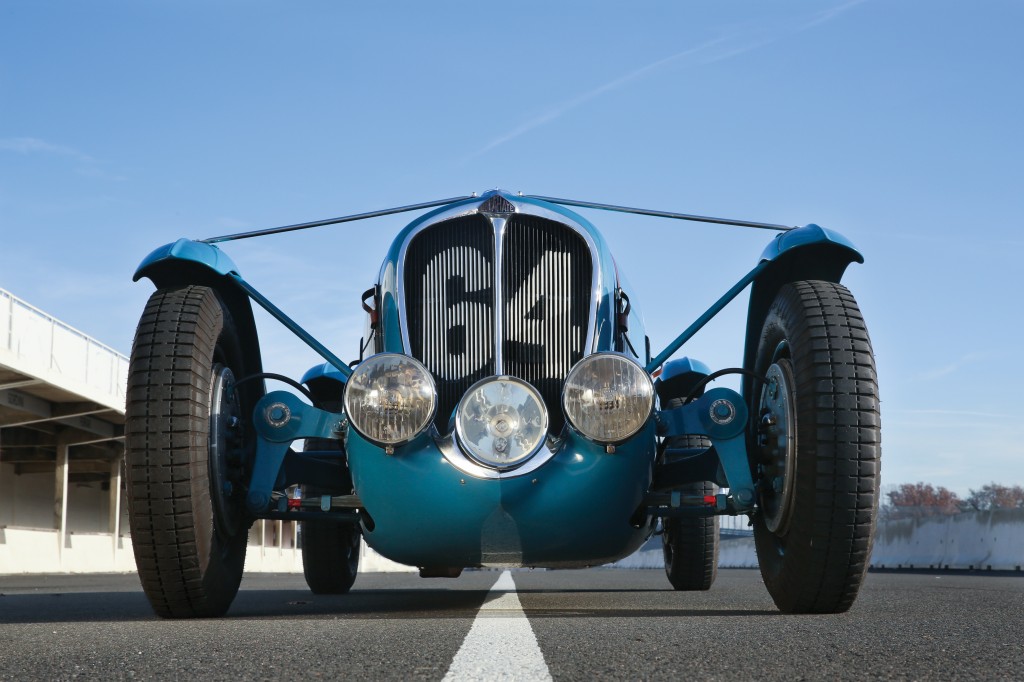 The Automobile Club de France had proposed a series of French races for “sport-competition” cars, which were designed to avoid the dominance of German and Italian marques in grand prix. Included in the ACF’s schedule, in addition to the 24 Hours of Le Mans, was the French Grand Prix, which was the proudest laurel any French auto manufacturer could win. 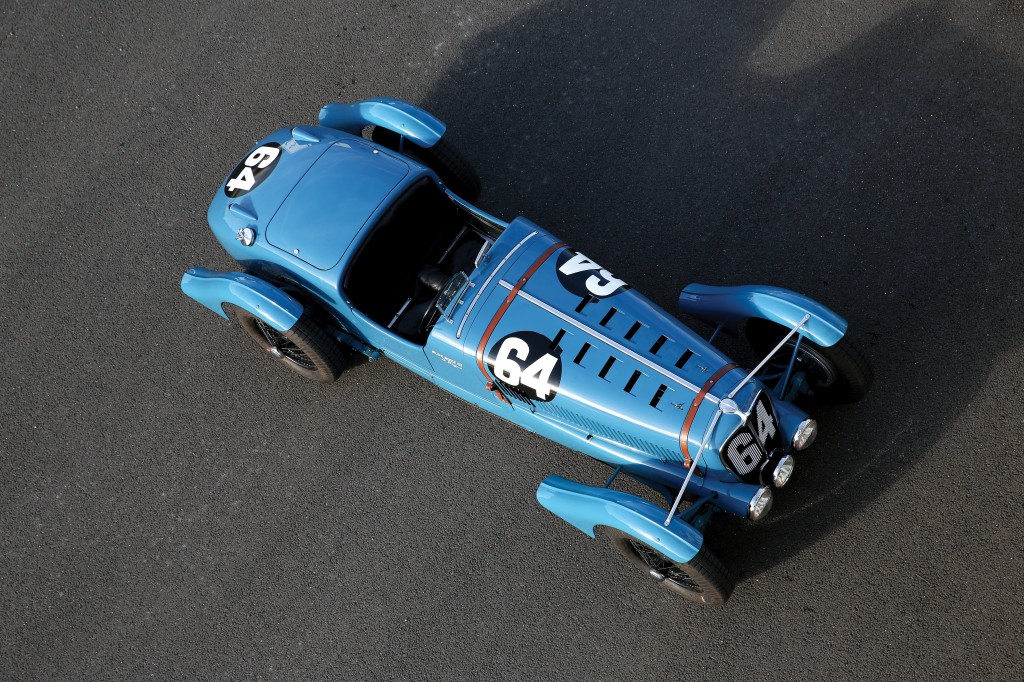 The French Grand Prix was held at Montlhèry, outside Paris, on 28 June, over a distance of 1,000 kilometres. The Delahaye Type 135 Specials threw a scare into Bugatti, finishing 2nd through 5th behind Wimille and Sommer in an envelope-bodied Bugatti Type 57G. Albert Perrot, with co-driver Dhome, finished 5th, just behind Laury Schell and René Carrière. Schell had finished 2nd in the 3 Hours of Marseilles, which was held a month before on the Miramas circuit, in a sweep of the top six positions by Delahaye Type 135 Specials. Two weeks after the French GP, Schell and Carrière finished 3rd overall at the 24 Hours of Spa. Delahaye’s hopes of adding the victory wreath from the 24 Hours of Le Mans to the company’s history was unfortunately interrupted by 1936’s social and labour unrest in France, which forced the cancellation of the endurance classic. 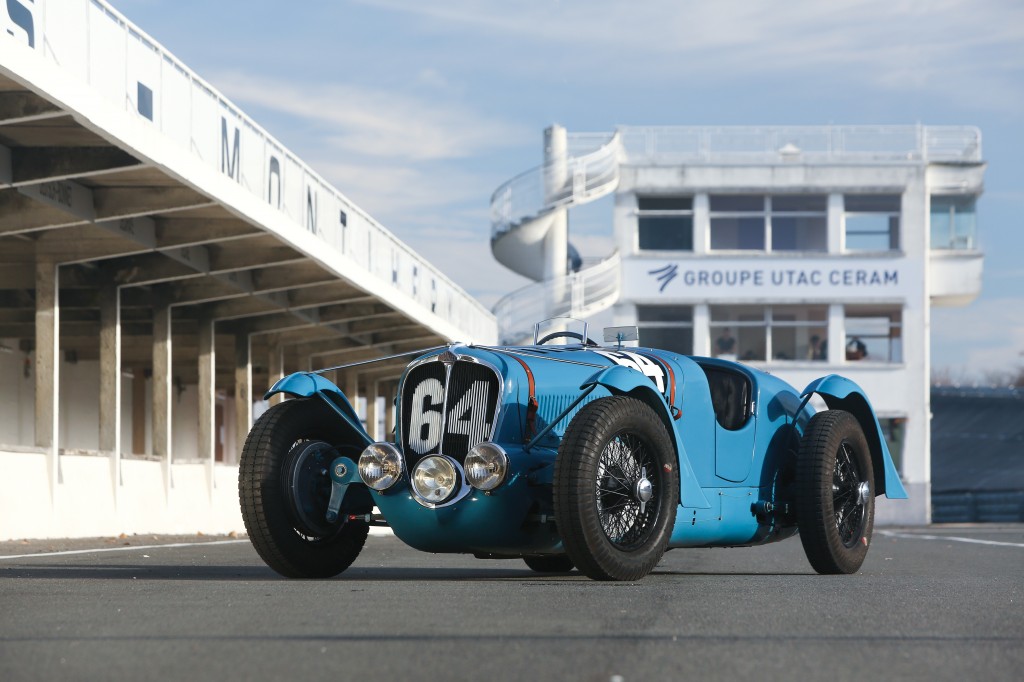 Chassis 47187 started life with a two-seater sport body by O. Lecanu-Deschamps in Levallois, Paris, France. It was purchased new in the spring of 1936 by the young Rene Le Begue, along with chassis 46075, a Competition Court chassis. He immediately began to campaign the car, entering it in the 3 Hours of Marseilles on 13 May and no fewer than 12 events throughout the 1936 season, all wearing the registration plate 2204 YB 6. Notable amongst these entries were the 24 Hours of Le Mans on 13 June, but, unfortunately, the race was cancelled due to social unrest. Following this was the Grand Prix de l’A.C.F., which was an important event due to the overwhelming presence of nine Delahayes on the grid, and there Le Begue managed to qualify 3rd. 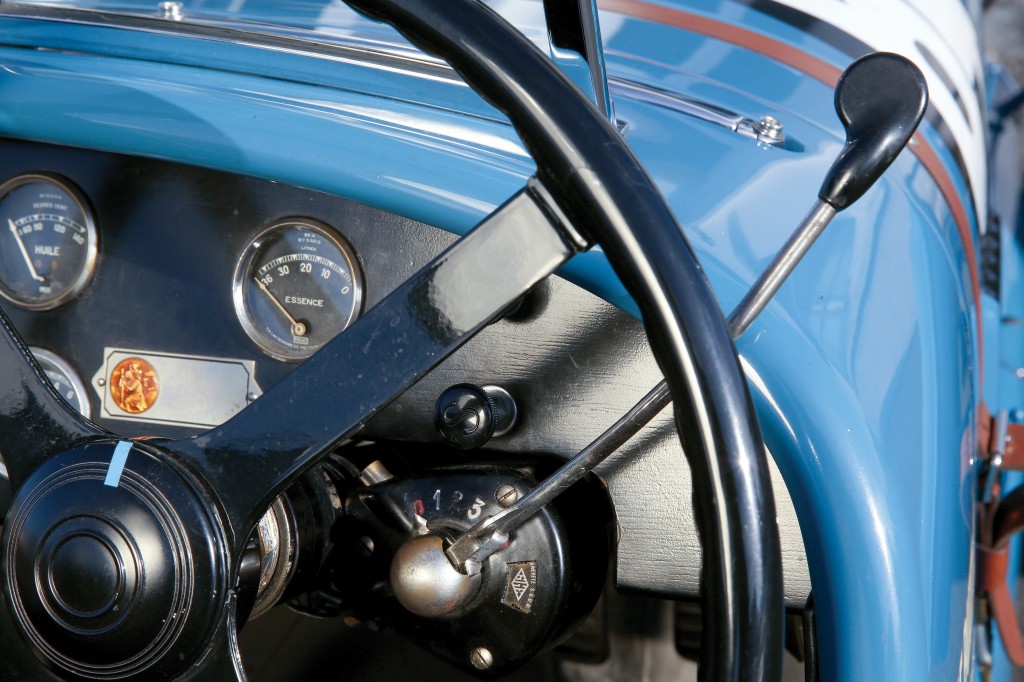 As Le Mans was cancelled, many teams shifted their focus to the 24 Hours of Spa. At the event there were categories A and B, which represented supercharged cars and those which were naturally aspirated, respectively; each of these categories was further subdivided into five classes that were based on displacement. The day was hard fought, with torrential rain to boot, but in the end, Le Begue and 47187 emerged victorious, finishing 1st in the two-to-four-litre class, first in Category A, and 2nd overall behind the powerful, supercharged 8C 2900 Alfa of Sommer and Severi. 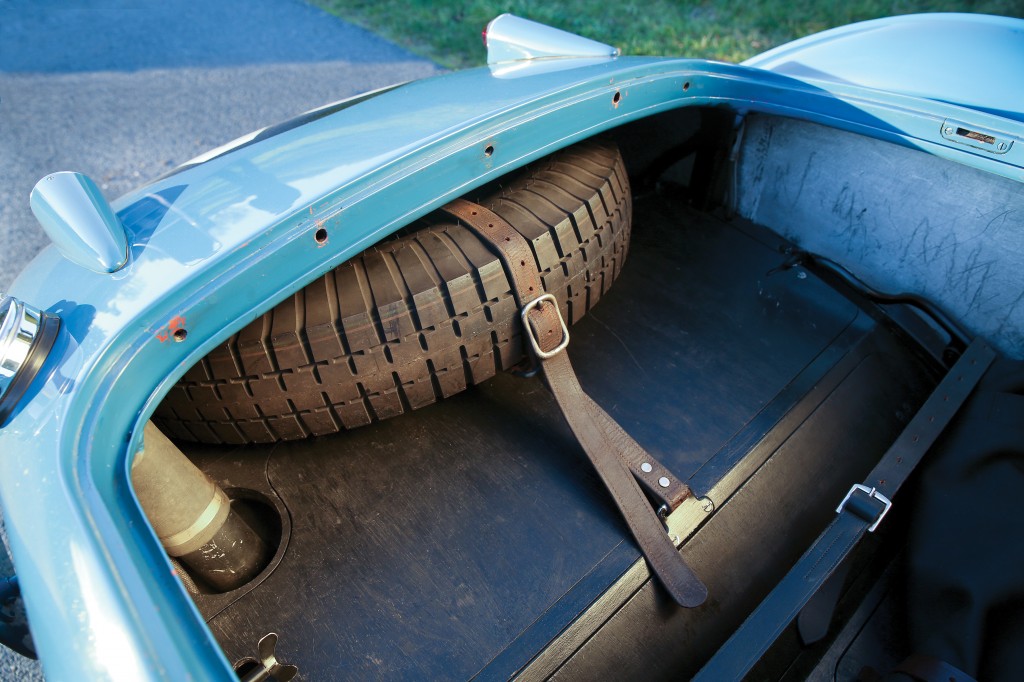 At the Grand Prix du Comminge in August, the car did well, finishing 4th overall and 1st amongst the seven 135 Specials present on the track. Next came the Tourist Trophy, held on 5 September in Belfast, which is a notable entry because this is the first time that 47187 appeared with white wheels, a white dash and steering wheel, and the “Blue Buzz III” moniker painted on the cowl. In the qualifying rounds, Le Begue earned the pole position and took a quick lead out of the muddy starting grid, achieving the fastest lap time at a recorded 137.658 km/h. Unfortunately, he did not finish this race due to electrical issues. 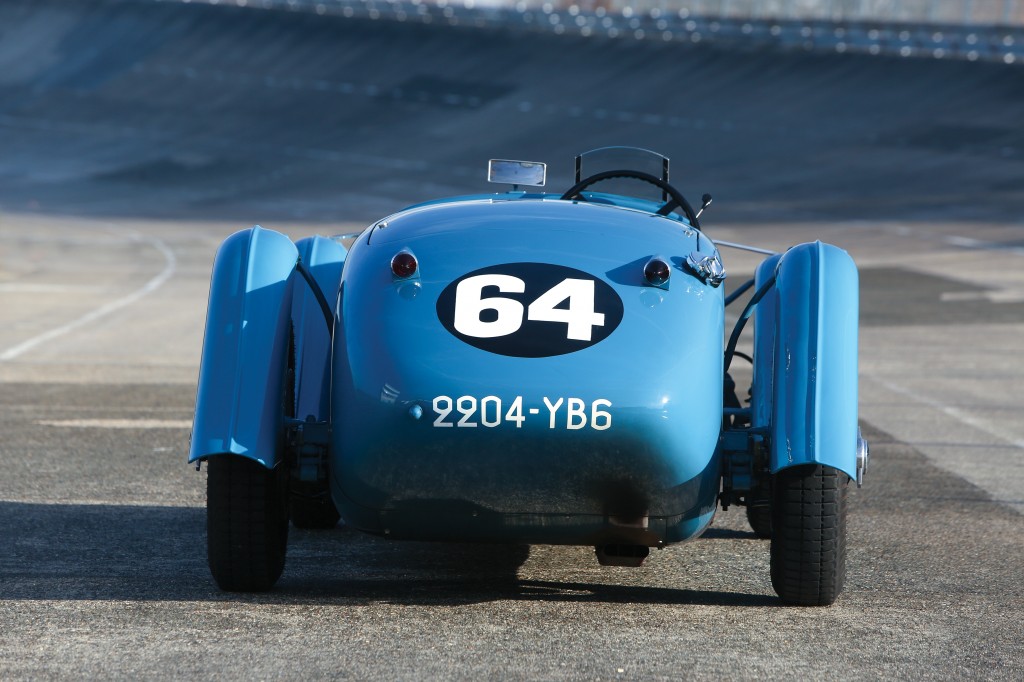 After participating in the Mount Ventoux Hill Climb, the car travelled to England for the Donington Grand Prix on 3 October, where there was a big showdown, which saw supercharged Alfas, Maseratis, Bugattis, and ERA against the naturally aspirated Delahayes. Being in the UK, Le Begue also took the opportunity to travel to Brooklands for testing trials in order to best calibrate his machine. At the end of the 1936 season, Le Begue was hired by Ecurie Talbot, resulting in the ownership of 47187 being passed to Count Pierre Merlin, with registration number 2339 RK 8. 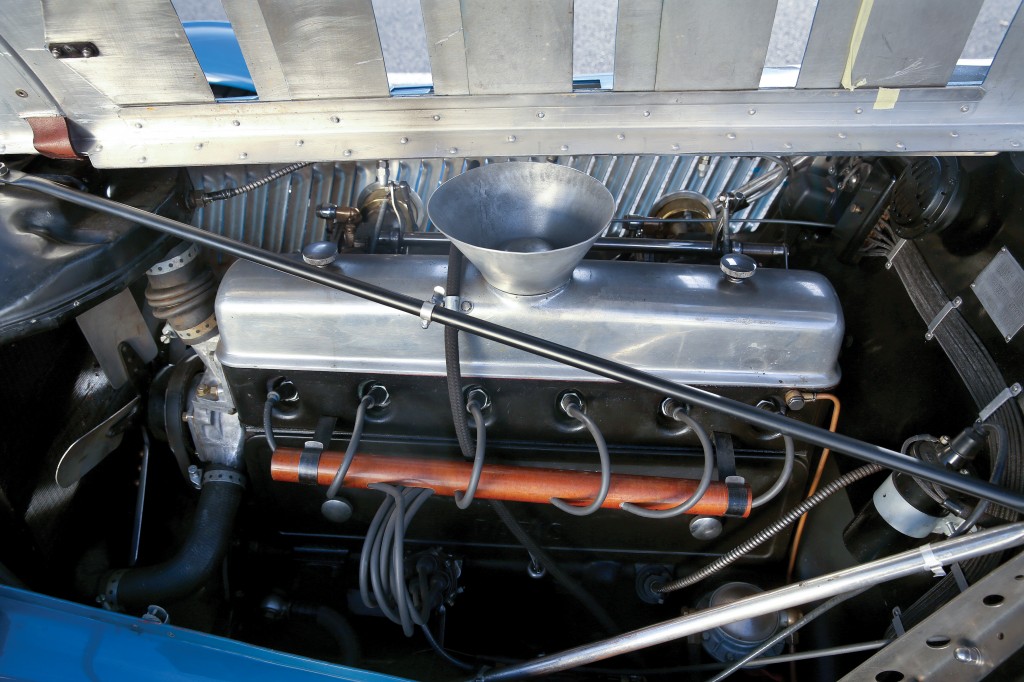 Due to a change of regulations, the car was fitted with a proper door, as were all of the other similarly bodied sports racers. Under Merlin’s ownership, the 135 S was entrusted to Raphael “Ralph” Bethenod de Las Casas, who placed 5th overall at the Grand Prix de Pau on 21 February and 3rd overall at the Coupe de Printemps in Montlhery. Merlin himself piloted the car in the 3 Hours of Marseilles, which would be the last event that the car was campaigned in in its original two-seater sport configuration.

At the end of the 1937 season, Merlin decided to use the Delahaye as a road car, and he had it rebodied into a roadster, which was more appropriate to his new intended use. On 27 June 1946, the car was sold to Miss Schwob de Lure, of Paris, who maintained the same registration number. At the end of 1947, de Lure sent the car to the coachbuilding shop of Jules Grignard in Enghien. The result of Grignard’s efforts was a cabriolet very much of the school of Figoni et Falaschi, and it was entered into the Concours d’Elegance of Enghien-les-Bains on 2 June 1948.

Miss Schwob sold the car shortly thereafter, and it passed through a short succession of known owners, with one of whom commissioning a berlinetta body by Henri Molla. In 1958, it was eventually acquired by George Marut with the intent to race. Marut entered the Delahaye into the Course de Cote de Limonest – Mont Verdun on 27 September 1959, and he finished 13th overall and 4th in class. Following Marut’s ownership, the Delahaye ultimately came into the possession of Charles Sadoyan, who would retain the car for four decades, from 1964 through to 2004, when it was acquired by the present owner. 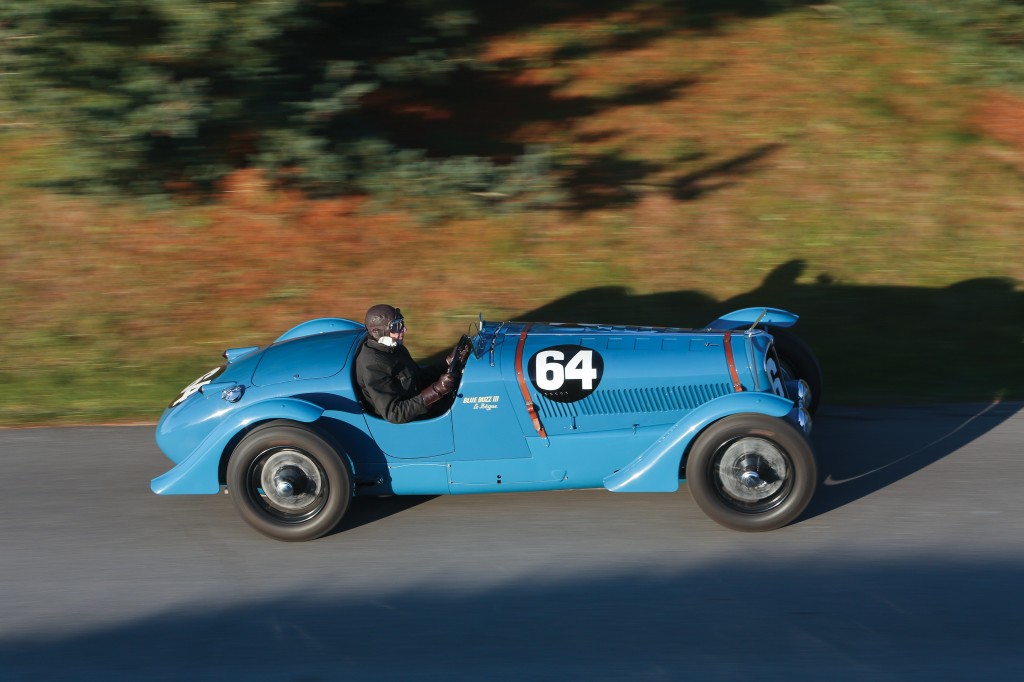 Today, it is believed that 7 of the 16 original Delahaye Type 135 Specials survive, which is ample evidence that enthusiasts recognised even in the darkest days of World War II that these were exceptional automobiles of the highest quality and rare distinction.

Chassis 47187 was built from its inception as a dual-purpose grand prix and sports car, making it adaptable to, and acceptable for, all of the most important and enjoyable events and tours. The Type 135 Special has scored points in grand prix, sports car, and endurance events, and it has been driven by legends in racing history. This Type 135 is beautifully presented and carefully prepared, and it would make a fabulous addition to the stable of the French racer.