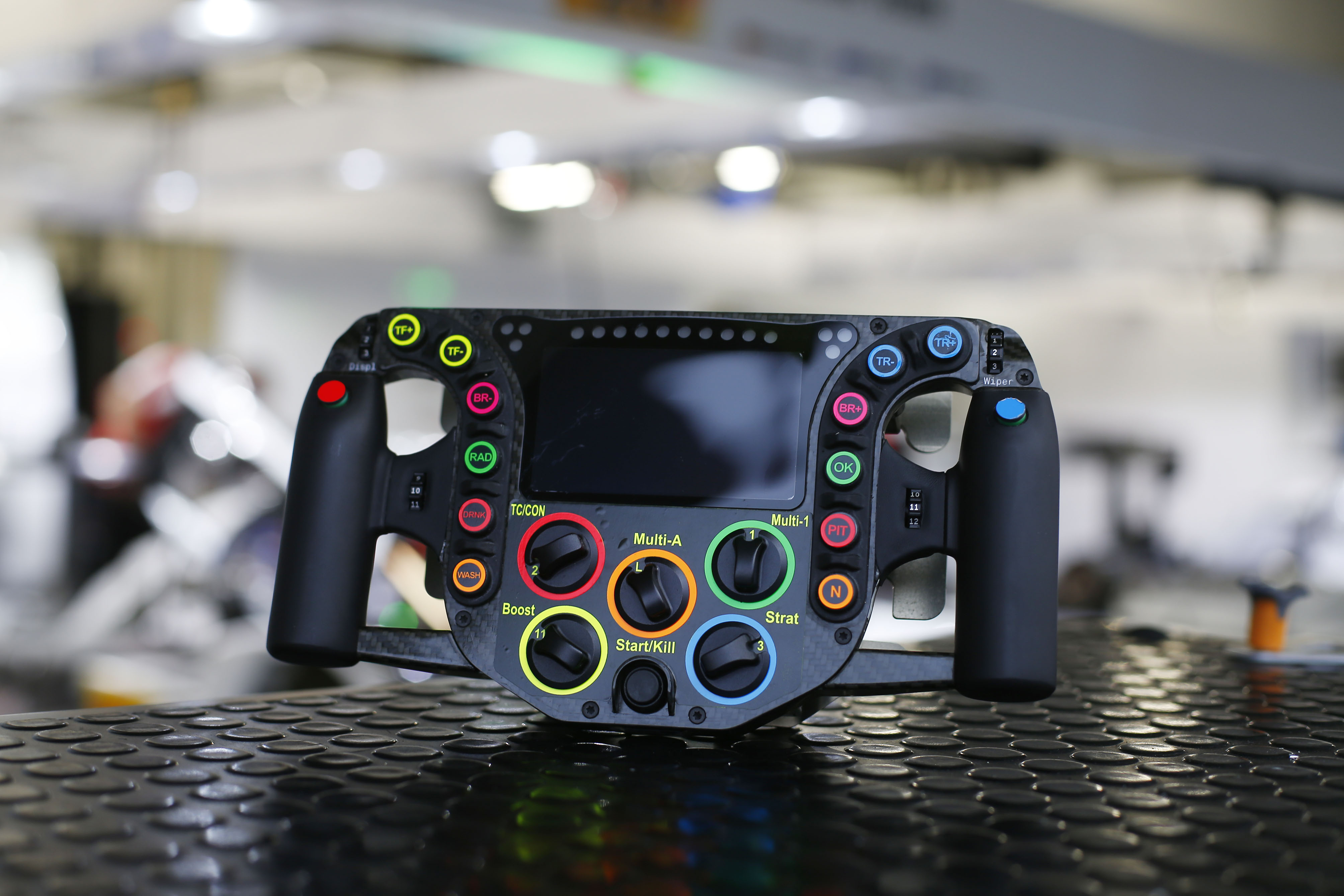 Stuttgart. Setting the direction is the most trivial task of the steering wheel in the Porsche 919 Hybrid. The drivers of the Class 1 Le Mans prototypes in the FIA World Endurance Championship have a computer in their hands. They operate 24 buttons and switches on the front as well as six paddles on the reverse side to control the most complex racing car built by Porsche to date. 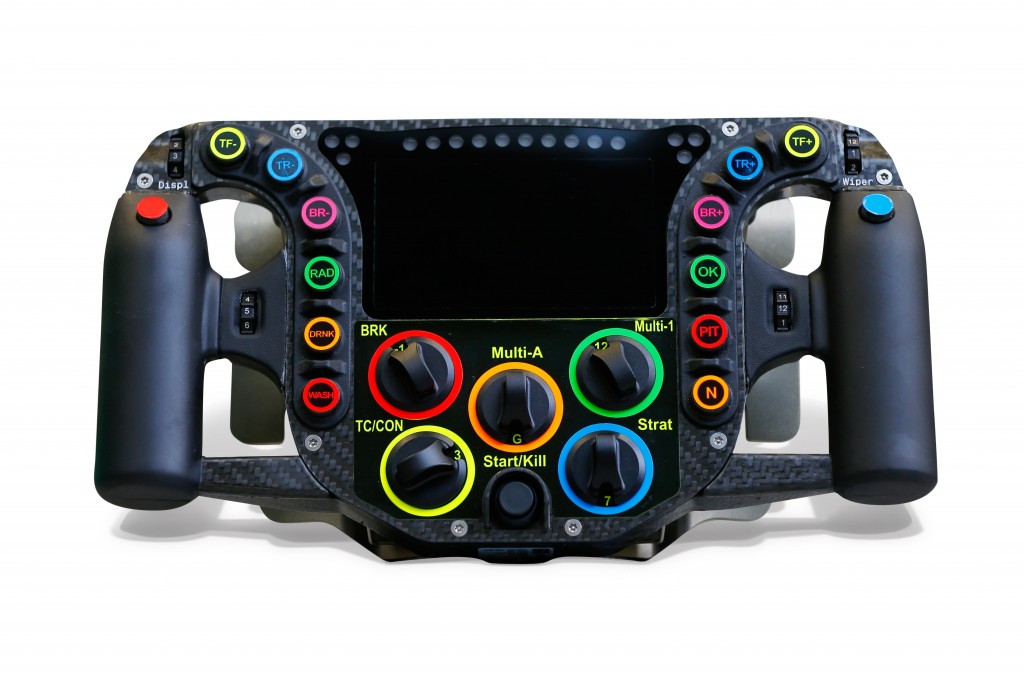 Although it is called a steering wheel, it is not round but a flat rectangle. The shape is due to the space required during driver changes. Tall drivers such as Mark Webber or Brendon Hartley, in particular, would otherwise have difficulties in accommodating their long legs quickly. There is a large display in the centre, which displays a multitude of information to the driver. This includes the speed, what gear is engaged, the currently selected motor management, and the charge status of the lithium ion battery, i.e. how much electrical energy is available to be called up to drive the front axle. The electric motor on the front axle supplements the turbo charged two litre, four cylinder combustion motor, which drives the rear wheels. The control button at the top left is used to select the displayed information, while the drivers use the control button in the right grip handle to dim down the display brightness at night. The identical control button in the left grip handle is for the volume of the pit radio, and the fourth rotary-type control at the top right varies the interval timing of the windscreen wiper. 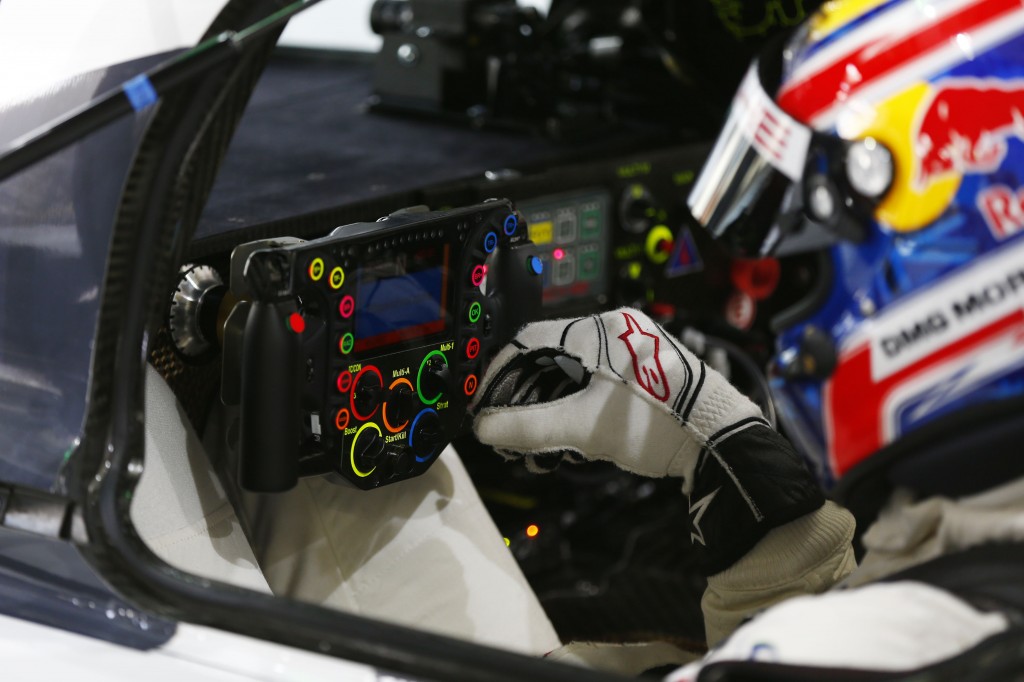 The buttons and switches on the steering wheel were carefully positioned in co-operation with the drivers, to facilitate reliable operation at racing pace. The most frequently used buttons are positioned along the top outside edge, so they are easily reached with the thumb. The blue button at the top right which is almost always in use, is the headlamp flasher, used by the fast prototypes to warn the slower vehicles in the WEC field before they are lapped. When pushed once, it causes the headlamps to flash three times. In daylight, the drivers keep their thumb on it almost permanently, as naturally the headlamp signal is more difficult to perceive at that time. 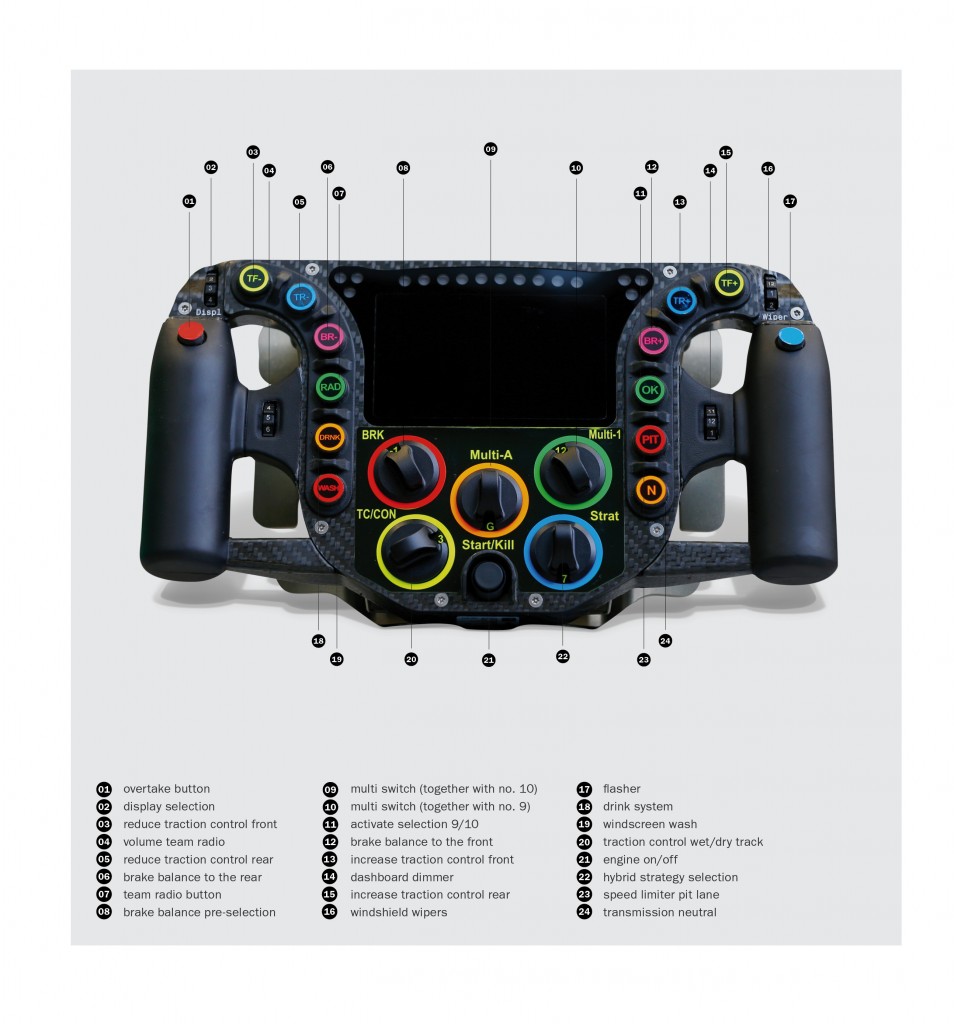 The red button at the top left is also highly frequented. It is used to demand electrical power from the battery, the so-called “boost”. The drivers can boost to pass but must be clever about rationing the power. The amount of energy per lap is specified. The yardstick is one lap in Le Mans, where six megajoules are available. The amounts are converted accordingly for shorter circuits. The amount of energy a driver uses in the middle of a lap to get free of the traffic will not be available at the end in the straightaways.

A bit further inside on the right and left are the plus and minus switches to adjust the front and rear traction control and to distribute the brake balance between the front and rear axle. These (yellow, blue and pink) are not used quite as frequently. 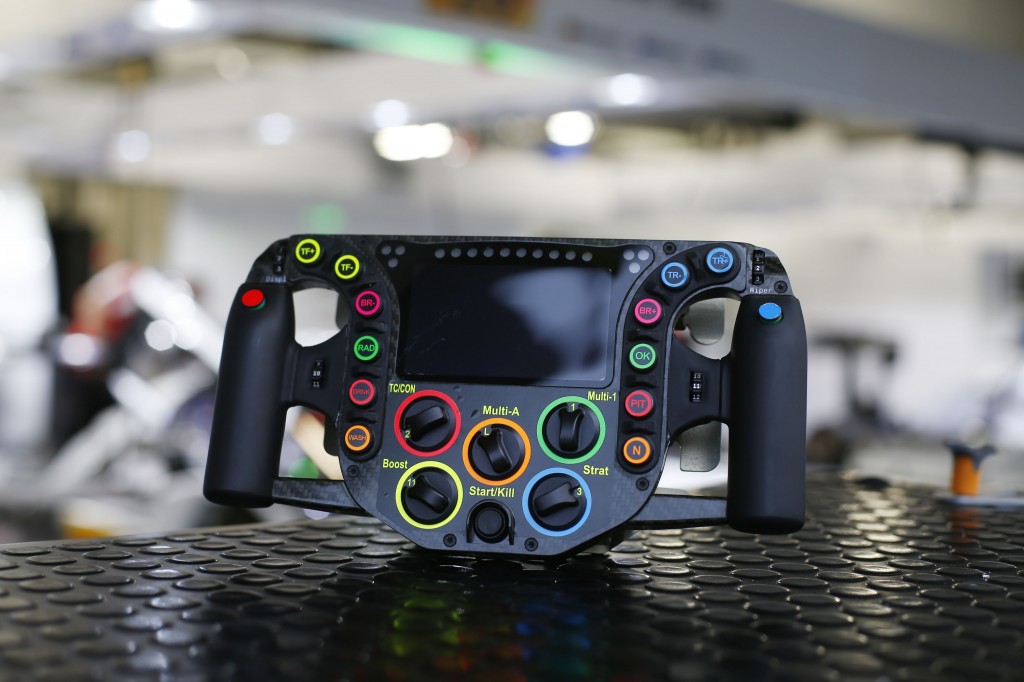 The orange buttons further down operate the drinking system (on left) and put the transmission in neutral (on right). The red button at the bottom left is for the windscreen washer, the red one on the right side activates the cruise control to restrict the speed in the pit lane. 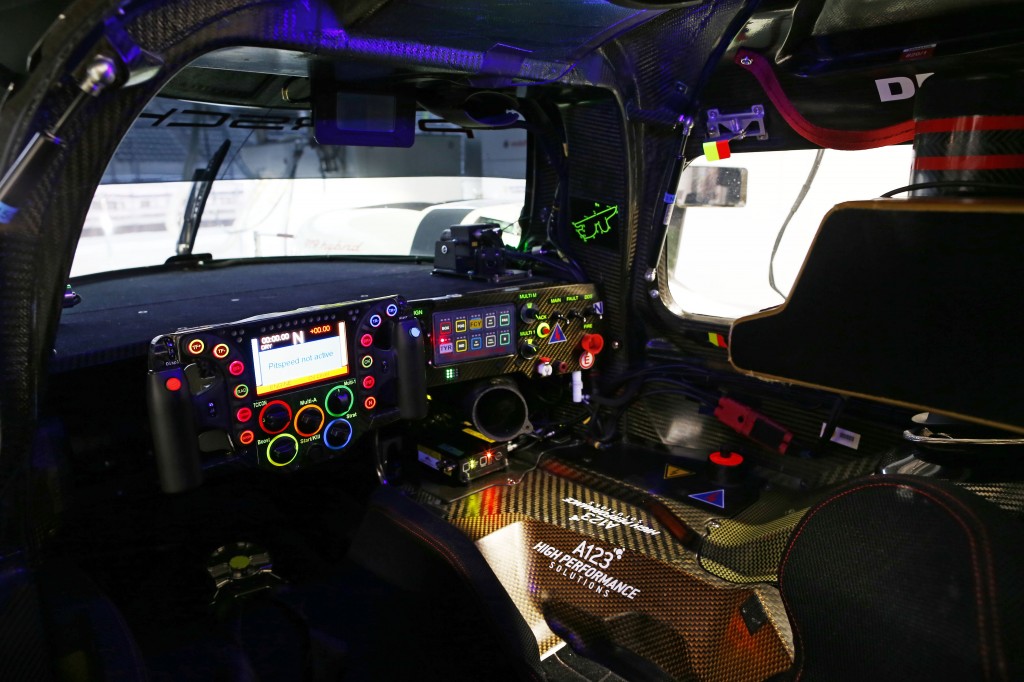 At the top centre, there are the green buttons for radio communication (on the left) as well as the OK button on the right. Drivers use the latter to confirm they have performed a setting change, which was requested from them via the pit radio. For these settings, they use the rotary switches, and usually only in the straightaways as they need to pull one hand out of the steering wheel grip for this purpose.

The two rotary switches called ‘Multi’ correspond with one another. The left one is available for ABC settings, the right one is number-based. Programmes for engine management or fuel management are designated by combinations such as A2 or B3. Three other rotary switches are available to pre-select the brake balance, set the traction control for wet or dry conditions and the hybrid strategy. 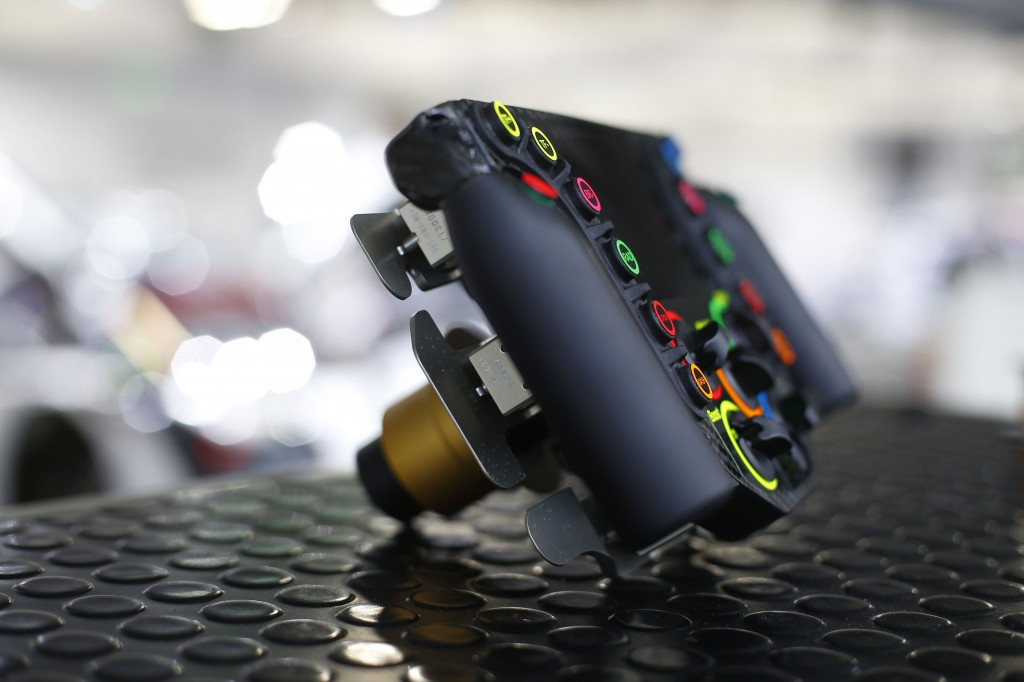 To make the switches easier to recognise in the dark, their colours are fluorescent and respond to a black light lamp, which is situated above the driver’s helmet.

The steering wheel is made of carbon, the grip handles are covered in slip-resistant rubber. Thanks to the power steering system, drivers can steer the car without any difficulty, even with the relatively narrow grips. When reaching through the openings, their fingers touch six paddles on the reverse side of the steering wheel. The centre paddles are used for changing gears – pulling the right paddle is for upshifting, and pulling the left paddle is for downshifting. The lowermost paddles operate the clutch and their function is identical on either side. Depending on whether the driver just entered a right or left curve, he can decide which side is easier to operate. The paddle at the top left operates the boost; whether the drivers use this paddle or the button described on the front is purely a matter of preference. The drivers use the paddle at the top right to initiate manual energy recuperation. This feels like a slightly engaged hand brake and supplies the battery reservoir with electric energy gained from kinetic energy.