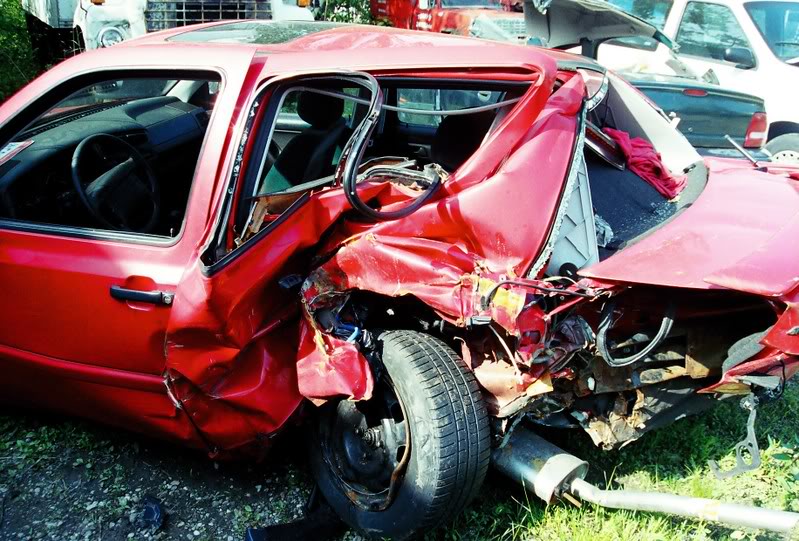 For car guys, the story of their car is intimately connected with the story of their lives. It is almost unavoidable, as we not only depend on our cars for transportation, but also spend countless hours wrenching and racing. An autobiography of a car guy is really an auto-biography of the owner – I’ve owned a lot of different vehicles, so this article is the first of a series about my life with cars.

My first car was a 1996 Volkswagen Jetta GL. Having just received my license, I was as new to driving as it gets. The car was a manual, of course, something I sought out even with no experience with it. My mom gave me some instruction, left me in the neighborhood with a full tank, and told me “dinner is at five, have fun.” I spent the rest of the afternoon trying to get a feel for it.  It took some time, but after a few days, I had it.

Looking back, I probably took the car for granted, but what did I know? It shifted better than anything else I’ve owned since. It never left me stranded and the a/c worked. This car was also my gateway to working on my own cars. Being young and ill-experienced, I took it to the dealership to get the radiator replaced, under the advice of my parents. Every time I picked it up it would over heat. Then they would blame some part, which worked fine before, and attempt to get me to pay for some new repair. The third time was enough. After giving it a good stare in the driveway, I figured it can’t be that hard to work on this thing! And a car guy was born. I also learned that German cars are assholes and make your life miserable when your wrenching on them.

One evening, I found myself at an intersection waiting for the light to change. I had just left a friend’s house and was heading home my usual way. It was getting late, traffic was light, and it was raining lightly. Since this was one of those notorious “takes forever lights,” I sat there and played with the station selection on the radio.  Then, POW!

I was in a daze. My back hurt. My neck hurt. I had no idea what had happened. From what I could tell, my car was some distance away from where it had been. There was a bit of a stupor that comes with being in shock, so processing my surroundings wasn’t going over too well. As I sat in my seat, I really had no idea what had happened. For a time, I tried opening my door to no avail, which made no sense at the time. My first thought was, “man, I hate doing bodywork” Looking out my passenger side window, I see my good friend driving past in his truck staring at me, literally with his jaw dropped. He had left his girlfriends house at the right time to see the tail end of the chase. I also found it odd so many police were there already. Especially one I knew quite well.

Turns out I was rear ended by a guy running from the police. The officer was there because he was in pursuit of the guy that hit me. The police knew that a high speed chase was a bad idea and slowed down. But alcohol and a series of bad decisions led the driver to continue into the back of my car, as well as a few cars across the intersection. His estimated speed was least 75 mph at impact.

After walking around for a few, (I have no memory of getting out of the car) I was asked to get back from the scene by someone who seemed authoritative. I pointed at my car, mentioned I was in it, and promptly found myself taped to a stretcher. Best part is they taped over my eyebrows to restrain my head. Better still, the gurney being metal, and being restrained at the head only, I spent the ambulance ride sliding around. What a great day…

At the hospital I learned more about what happened from the cops who came to take my statement. They were quite surprised I wasn’t worse for wears. Better still almost everyone I knew showed up at the ER to visit. Even one friend with gums stuck in his hair. The Nurse cut it out for him. He is a Navy Nuclear Tech now.

But I was lucky. I was alive. The car however was totalled. The giant trunk absorbed quite a bit of the impact but my seat was still broken in half by the trunk coming in to hang out with me. The pictures explain it best. Volkswagen was right, safe happened. 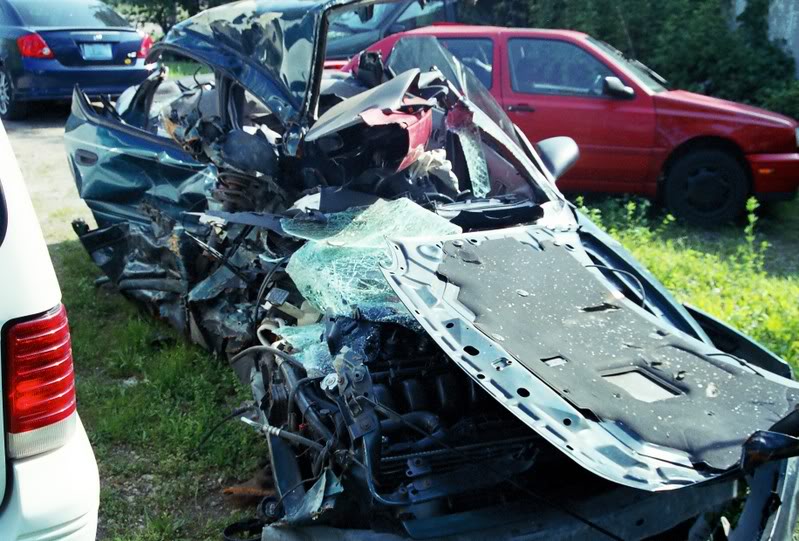