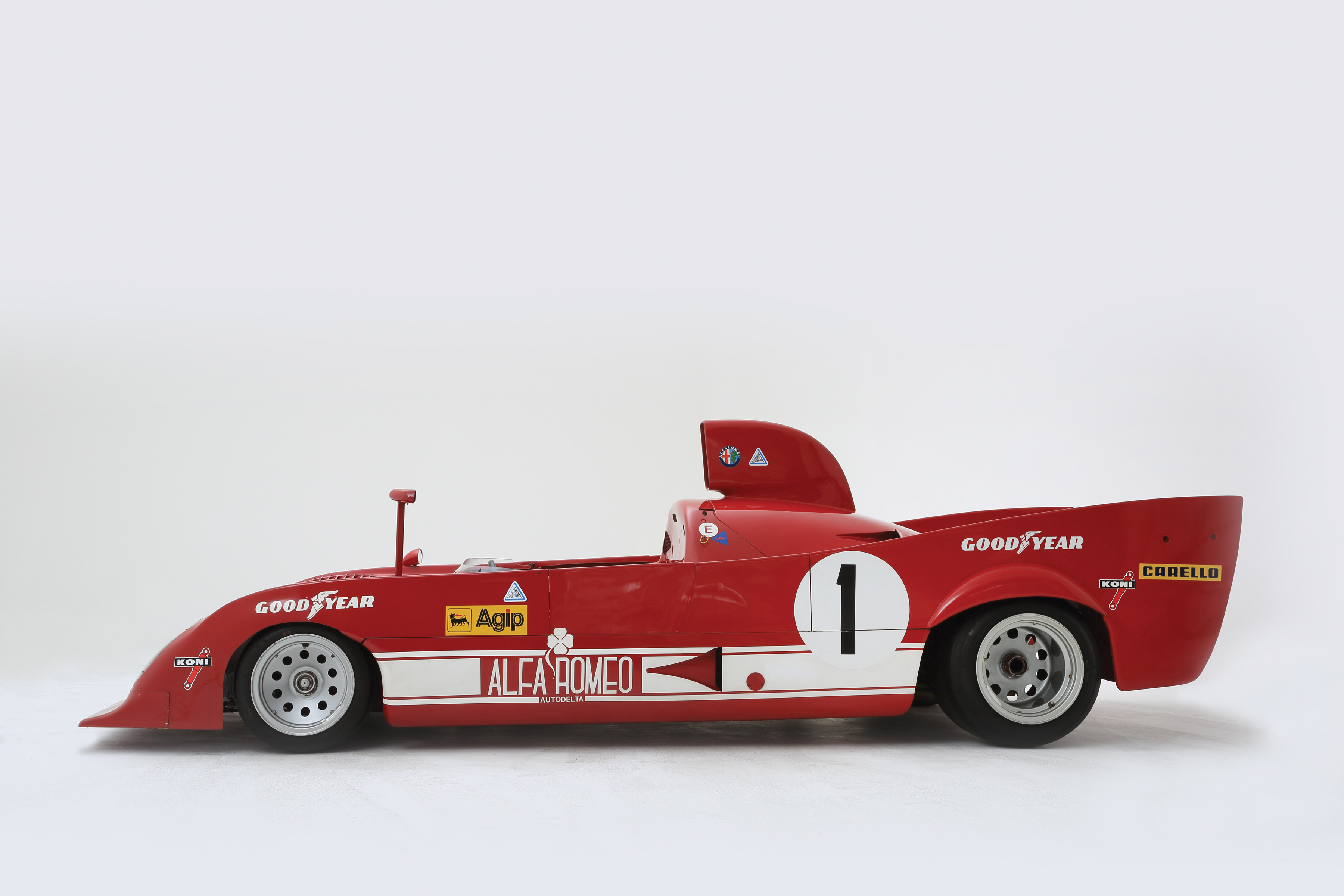 The year 1973 marked the introduction of an important new racing car for Alfa Romeo. Pushing the boundaries of its venerable Tipo 33 platform, the 33 TT 12 featured a completely new engine that pushed the car to new heights, arguably making it the best iteration of Alfa’s Tipo 33 series of sports racing cars. Like the earlier Tipo 33 cars, Alfa Romeo was supported by Autodelta. Responsible for preparing the cars for competition by tailoring their driving characteristics to each specific circuit and supporting the cars with some of the best mechanics Italy had to offer, there was no doubt that Autodelta largely contributed to the car’s success, most notably in the 1975 season. 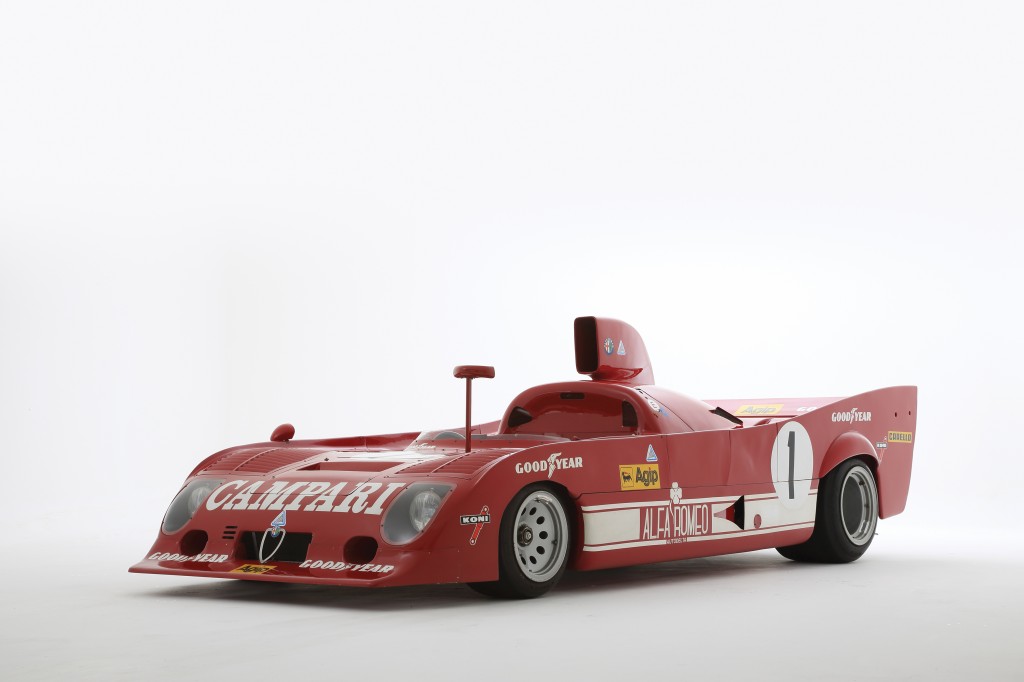 As usual, components were crafted with racing and saving massive amounts of weight in mind, but they were also constructed to be strong enough to withstand the rigors of endurance racing. The 33 TT 12’s body was constructed in fibreglass, and the tubular chassis (Telaio Tubolare in it native Italian, which is abbreviated to TT) was made from a lightweight alloy. Like other cars of the Tipo 33 series, the 33 TT 12 was of open top design. Of course, aerodynamics were paramount to any sports racing car’s success, and these Alfa Romeos had no trouble finding grip at high speeds. 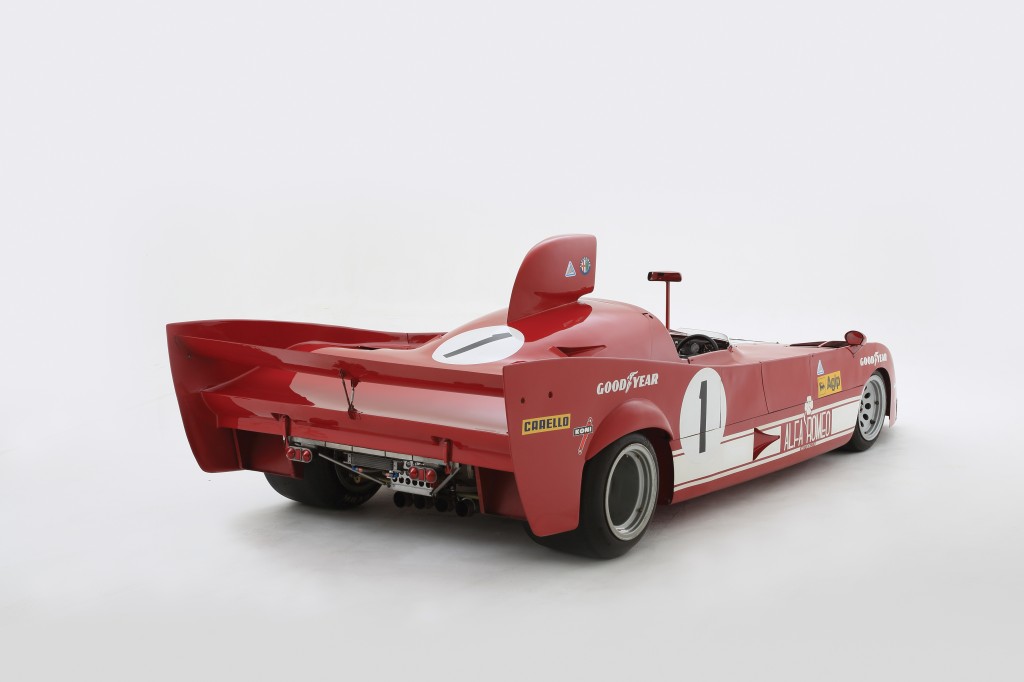 Gone was the three-litre V-8 of the Tipo 33/3, and in its place was a new, boxer 12-cylinder engine. This engine produced a monstrous 500 horsepower and an insane 11,000 rpm. Much more potent than the already successful V-8 of the past Tipo 33 cars, the boxer V-12 had no problem propelling the car’s total weight of 658 kilograms to ridiculous speeds. Alfa Romeo’s flat twelve was naturally aspirated in a series that was dominated by engines that were outfitted with turbochargers. The fact that Alfa’s naturally aspirated engine could create similar amounts of power as its boosted competitors demonstrated the capability of the engineers behind the car and the reliability of its drivetrain. 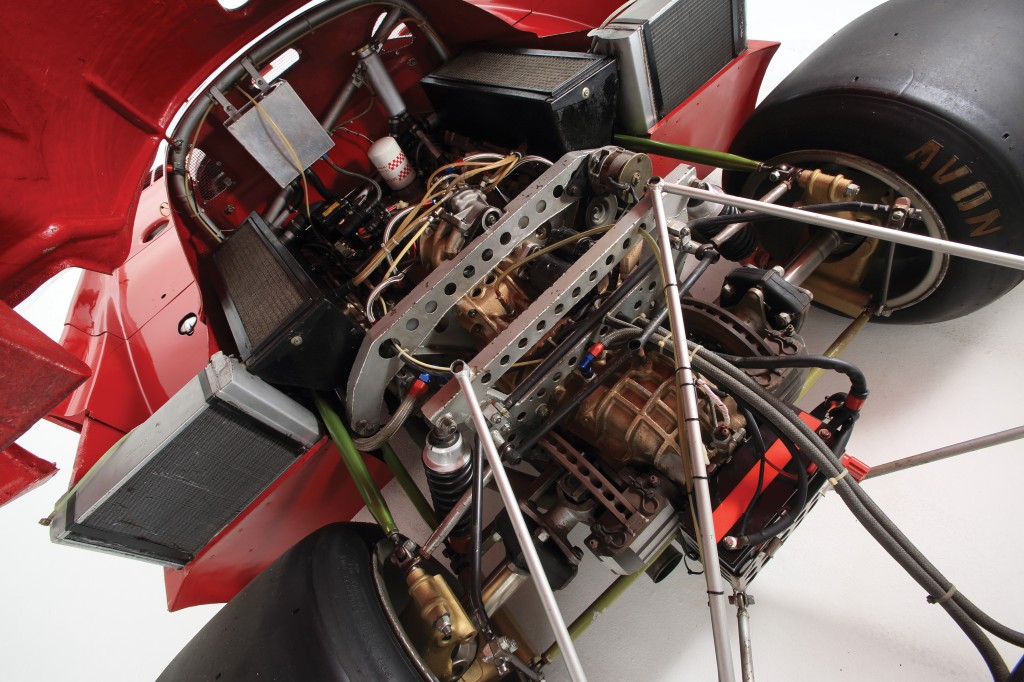 Alfa tried its best to learn from its newest car, so they used the 1973 season, the 33 TT 12’s first season in formal competition, to prepare for the coming years, knowing that they had a potential championship car on their hands. Alfa’s first big win with the 33 TT 12 came at the Monza 1000 km race in 1974, but the car often could not stand up to the likes of Matra and Ferrari. Regardless, the car would go on to achieve 2nd place in the Championship for that year, an incredible result considering the stiff competition Alfa Romeo faced. With two years of experience with their new 12-cylinder engine, and with the car steadily moving up in the results, Alfa Romeo knew that they were ready to make a legitimate push for the Championship title the next season, following some more minor updates. 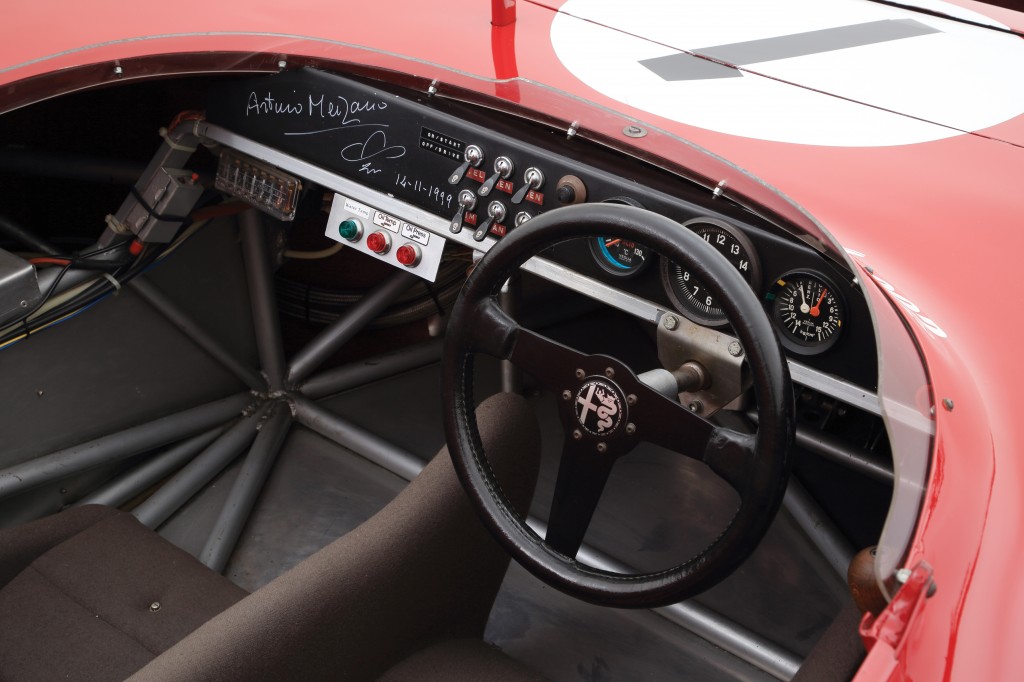 For the 1975 season, Alfa Romeo returned the 33 TT 12 to the grid more determined than ever to get a World Championship title under their name. After revising the car to simultaneously add power and decrease weight, whilst also modifying the suspension and brakes over the winter of 1974–1975, Alfa was convinced that they had finally produced a car that could claim the Championship title. The season that followed would prove to be nothing short of spectacular. Alfa Romeo picked up a stunning seven consecutive victories out of eight total races entered, including victories at Mugello, Dijon, Monza, Spa, Coppa Florio, the Nürburgring, and Watkins Glen. This string of victories handily put them in front of arch rivals Porsche and Renault-Alpine, and it would give Alfa Romeo the World Manufacturer’s Championship they so desired. During their seven consecutive victories, other Alfas would go on to finish 2nd in five of those races, adding to the utter domination by the Alfa Romeo team. A 33 TT 12 would also be victorious in the 1975 Targa Florio, with Nino Vaccarella and Artuo Merzario behind the wheel. 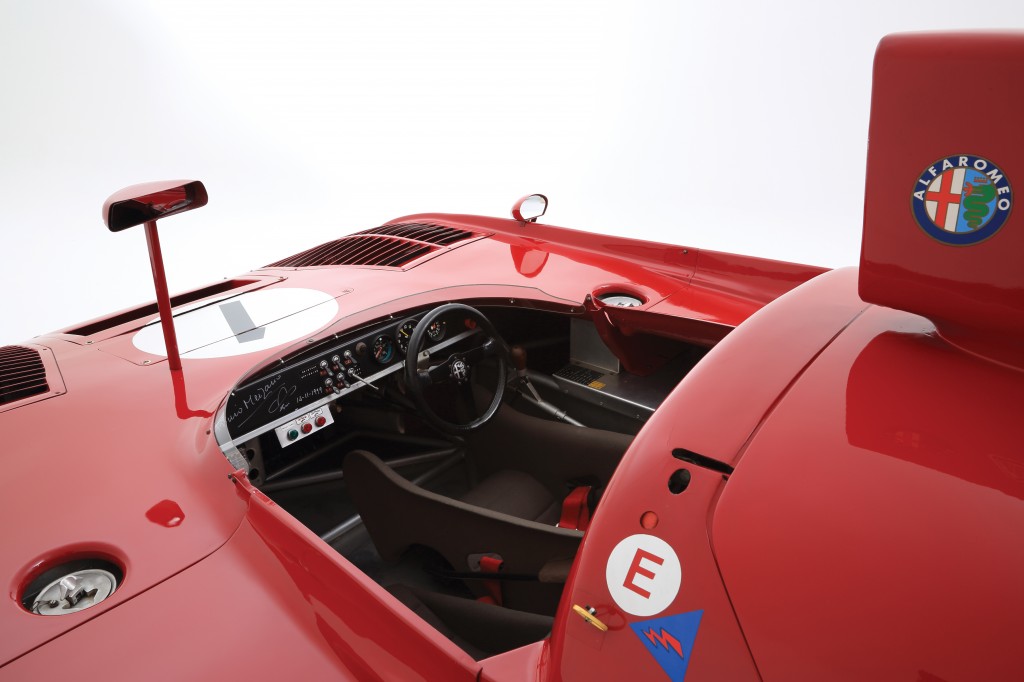 The car offered here was purchased from Leif Nilsson by its current owner in the mid-1990s in Sweden. This purchased occurred through former Autodelta driver Toime Hezemans shortly after the completion of a restoration. The car has seen limited use under the current owner’s ownership, but it has been very well looked after. It is presently equipped with a replacement engine, as an original engine, number 39, is currently not in working condition; however, the original engine is included in the sale, and it can be reunited with the car, should the new owner choose to do so. The body appears to have been replaced, and included with the purchase of the car is a spare front bonnet and additional spare parts. 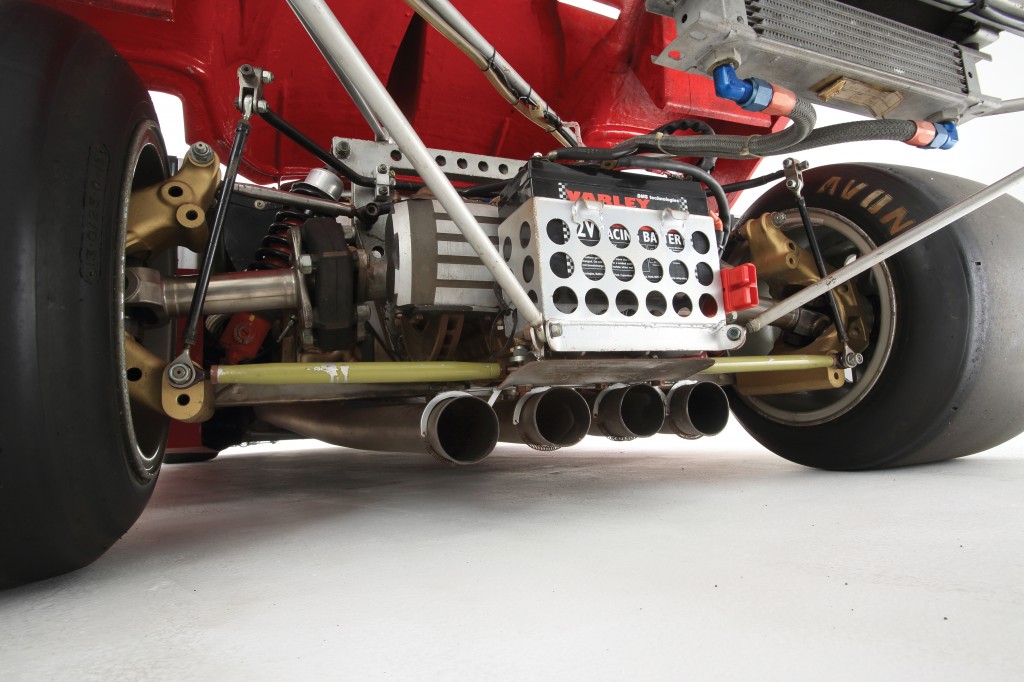 Ownership of an Alfa Romeo 33 TT 12 is truly ownership of one of the greatest racing Alfa Romeo’s of all time. The wail of the engine at 11,000 rpm is a sound that needs to be heard in order to be believed. This car is certainly eligible for historic racing events and simply begs to get back out onto the track and relive its glory days. A masterpiece of engineering such as this is certainly a must have for any collector of Alfa Romeos or competition ready sports cars, and for one who is willing to drive this car as it was intended to be driven by its creators.