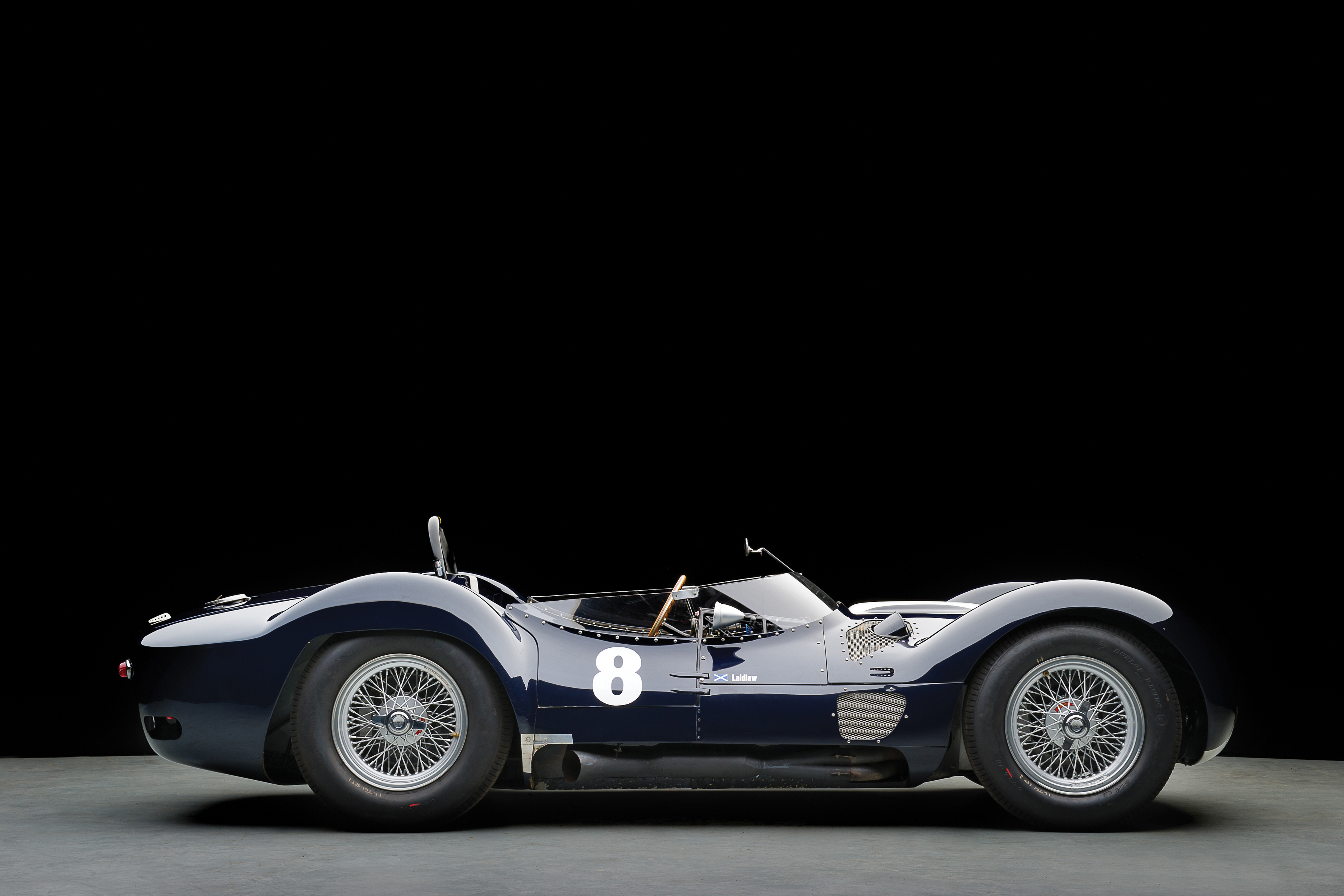 Few sports racers of the 1960s have garnered a more legendary status than the Maserati Birdcage. Originally a 2 litre, and designated the Tipo 60, the famous tubular-trellis Birdcage burst onto the scene with Stirling Moss’ victory in chassis number 2451 at the Coupe Delamare Debauteville on 12 July 1959. In the competitive American racing market, word was already out that Maserati was developing a larger four-cylinder engine, and it wasn’t long before an anxious spate of owners lined up for the Tipo 61, a development of the Birdcage with the enlarged 2.9-litre engine. 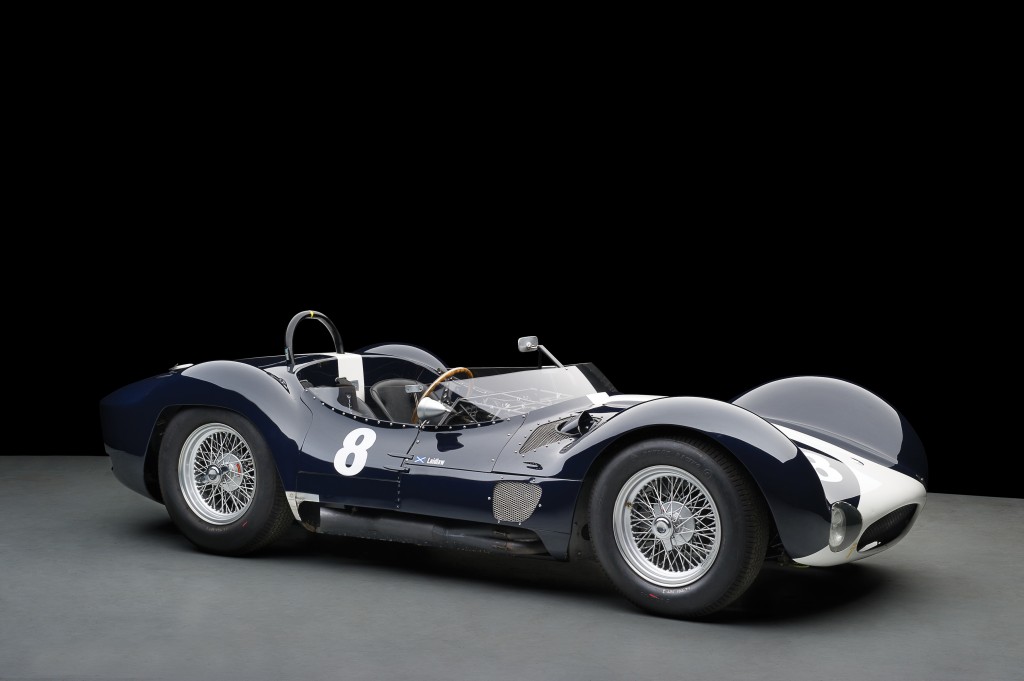 Customer deliveries of T61s to the United States began in October 1959 with chassis number 2453, and shortly thereafter, 2455, driven by Gaston Andrey, caused quite a stir at the Governor’s Race at Nassau in the Bahamas on 6 December 1959. It was there that Lloyd Casner, owner of T60 chassis number 2451, witnessed the true potential of the T61. Completing factory assembly on 13 May 1960, this car, chassis number 2464, was finished in white with a blue centre stripe and was sold to Lloyd “Lucky” Casner, the American privateer racer whose Casner Motor Racing Division, or Camoradi team, was such a pivotal test bed for factory Birdcage development. The car was the 12th Birdcage Tipo 61 constructed, and it was the last of three cars that Casner ordered that year on the memory of Gaston Andrey’s performance at the Nassau Speed Week in early December 1959. 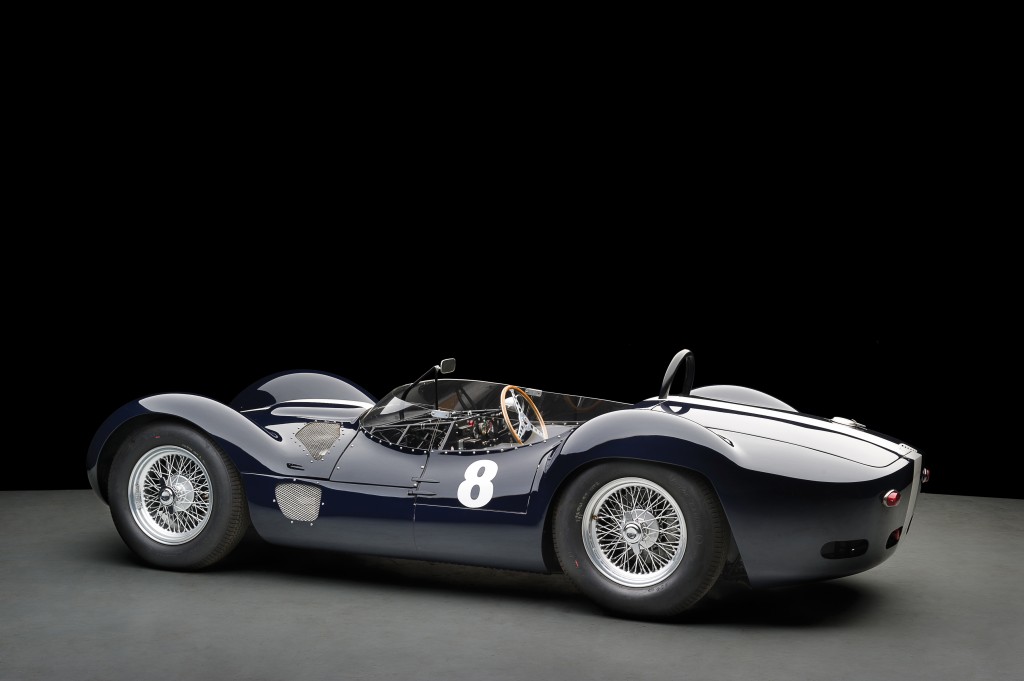 On 22 May, just nine days after its construction, 2464 was entered in the Nürburgring 1000 km as one of two Camoradi Birdcages, wearing race number 6. Driven by Masten Gregory and Gino Munaron, the Birdcage fell behind as the race progressed, and it eventually finished a respectable 5th overall; this was a minor setback that was easily overlooked in light of the 1st overall finish of the sister Camoradi car, chassis number 2461, which was driven by Stirling Moss and Dan Gurney. 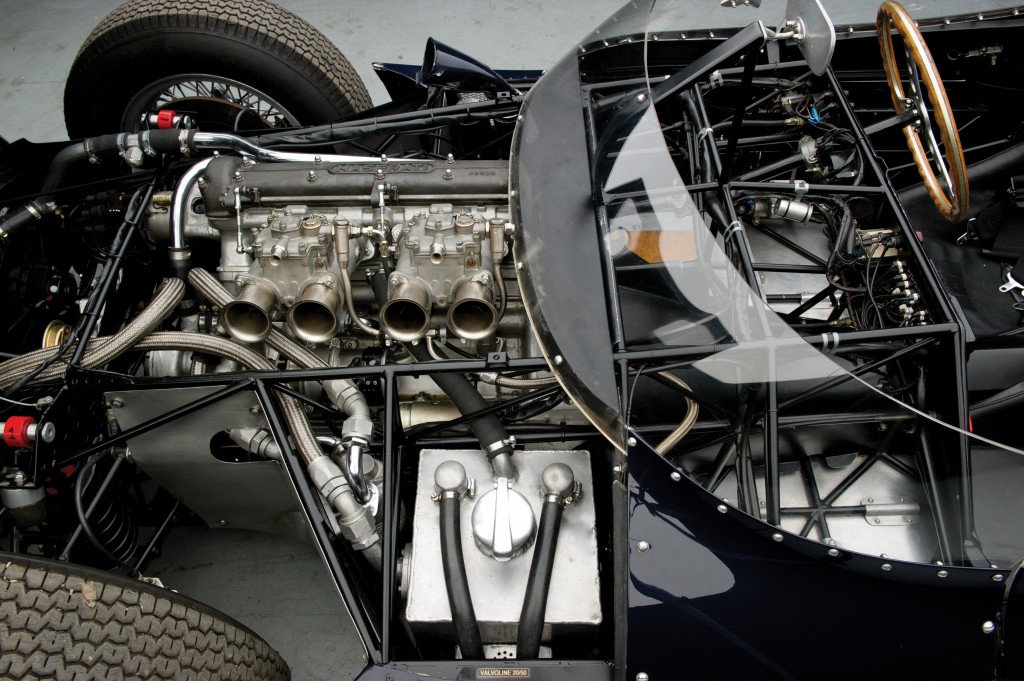 Almost a month later, 2464 was one of three Camoradi Birdcages entered at Le Mans, and as such, it was one of two cars fitted with the new “longtail”, a body modification intended to improve aerodynamics and top speed on the long straights. Initially earmarked for Dan Gurney and Carroll Shelby to drive, 2464, wearing race number 25, was, in fact, driven by Casner himself, with James Jeffords sharing the responsibility. Lucky Casner took the wheel at the startl; then, after 29 laps and two hours into the race, Jeffords jumped in the hot seat. Casner drove a further 28 laps before handing it back over to Jeffords. Jeffords faced problems before finally returning to the pits at 2:01 a.m. for the last time. Fascinatingly, 2464’s documentation includes archival copies of the original 1960 Le Mans logbook and application, with the latter document dated in January 1960, reflecting Casner’s intention to use Dan Gurney and Carroll Shelby as his drivers. 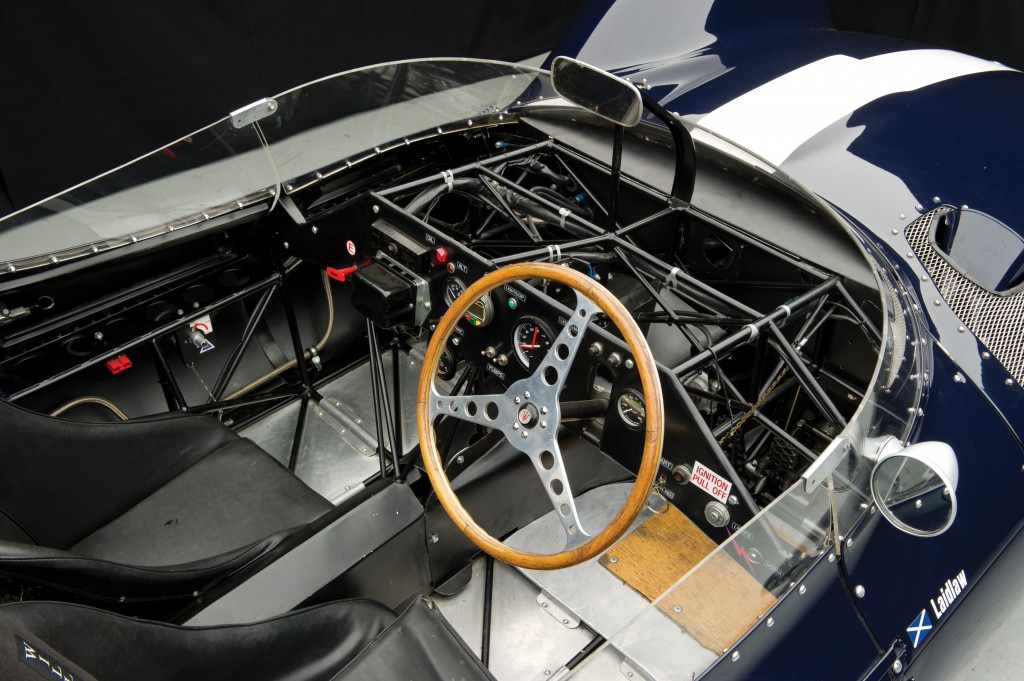 On 7 August, Casner and Swedish driver Joakim Bonner drove 2464 to a 1st in class and 2nd overall finish at the Kanonloppet (or Cannon Race) held at the Karlskoga Motorstadion, a predecessor of the Swedish Grand Prix. In the later part of 1960, with Maserati developing a final improved batch of Tipo 61 Birdcages and setting his sights on the forthcoming rear-engine Tipo 63 model, Casner sought to sell a couple of his earlier cars to make room for the new models. Accordingly, in autumn of 1960, he sold both chassis number 2464 and 2461 to Texan privateer Alan Connell, a well-known SCCA competitor who raced numerous Italian sports cars, including several Maseratis. 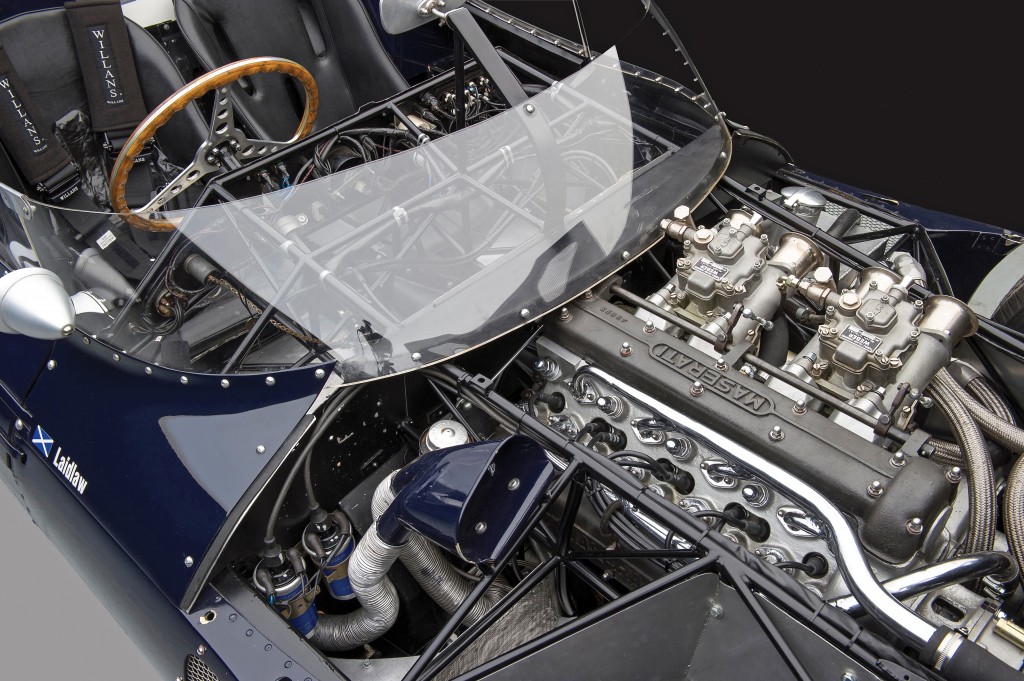 Although it is believed that both cars were bodied in the longtail configuration, it was Connell’s intention to use a longtail on courses with significant straightaways and a “bobtail” on the winding circuits with shorter straights. To this end, 2464 was returned to its original bobtail bodywork, a modification that was performed by R. David Jones in Connell’s shop, as the one time mechanic recently related to author Willem Oosthoek. Mr Jones went on to become a high-ranking executive within the SCCA. 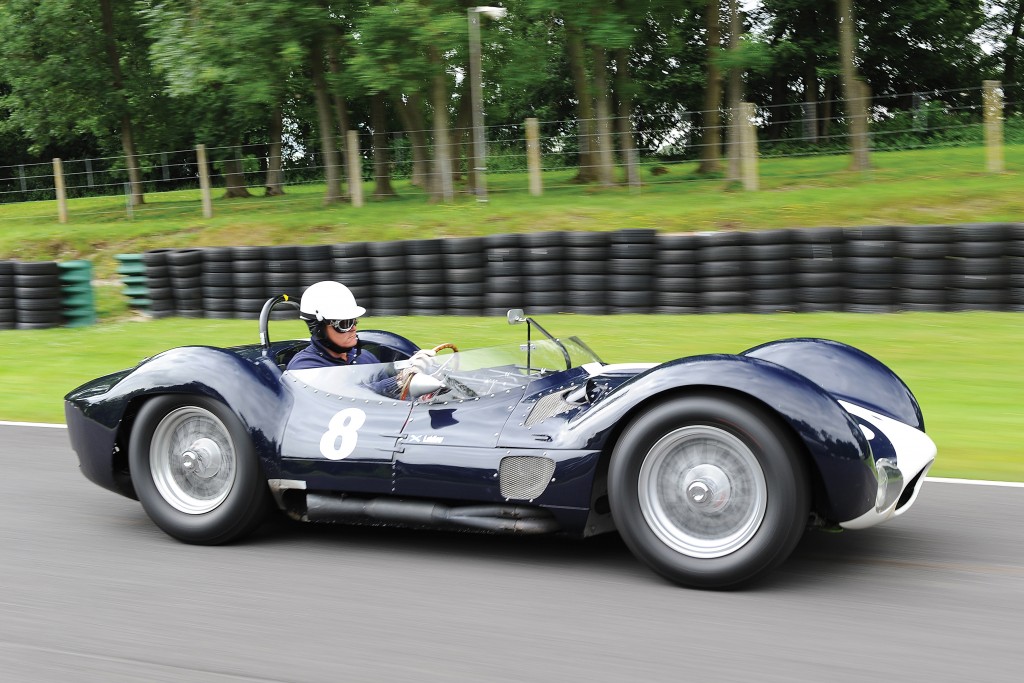 Repainting the car dark blue metallic, Connell roared to a 3rd place finish at the Hondo preliminaries on 8 April 1961, and, on 6 May, he garnered the chequered flag at Mansfield, Louisiana. This victory was followed by a 2nd overall at Bridgehampton on 28 May and consecutive 1st place finishes at the preliminaries and fall roundup at Green Valley from 1–2 October. 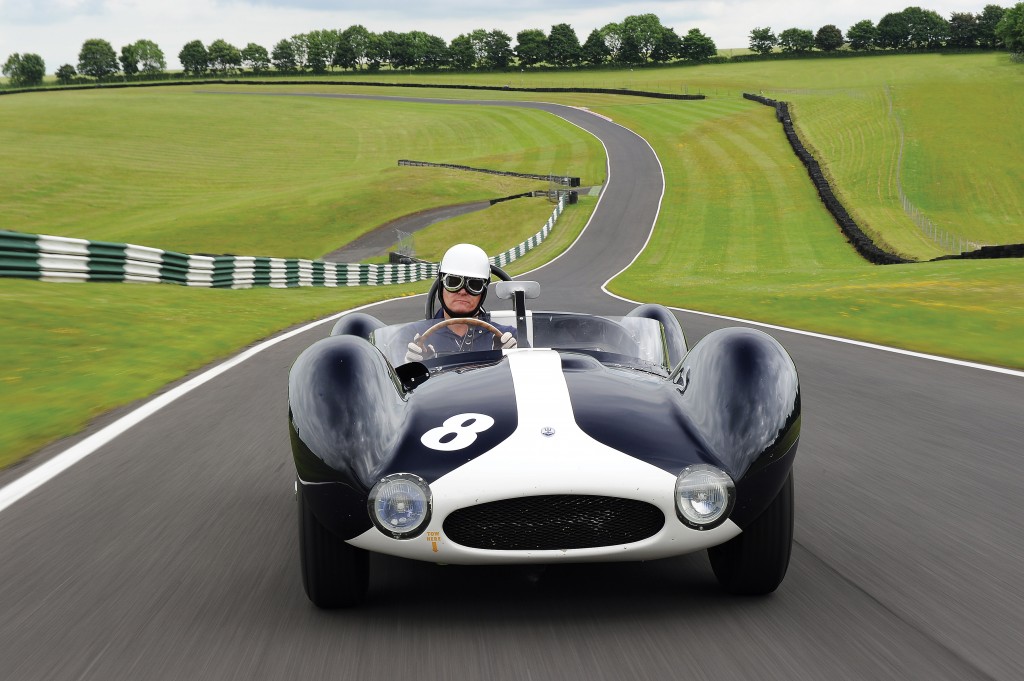 In early 1962, Mr Connell sold 2464 to Enus Wilson, of Okmulgee, Oklahoma, whilst the car was in pieces. It was originally Mr Wilson’s intention to use the car as a parts donor for his other Birdcage, an ex-Penske car (chassis number 2471). Eventually abandoning this plan, Wilson reassembled 2464 and undertook a racing campaign of his own, even finishing 1st overall at the preliminary event at Stuttgart, Arkansas, on 26 May 1962. Almost a year later, he repeated the performance with another chequered flag at Stuttgart on 21 April 1963. 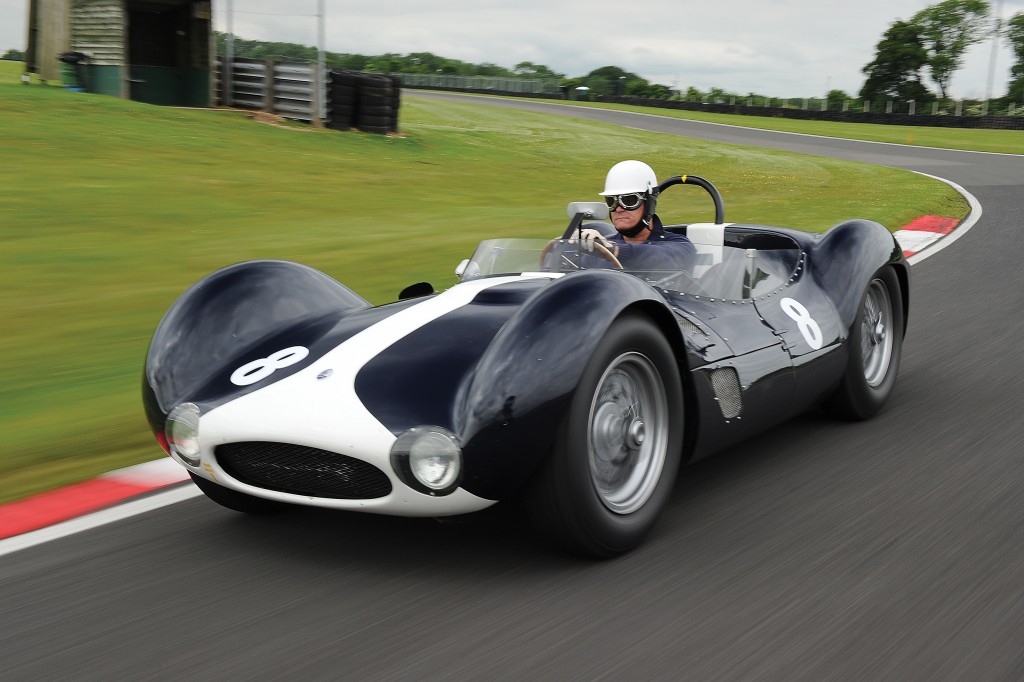 However, following several DNFs, it was increasingly apparent that the Birdcage was losing its competitive edge, and Mr Wilson sold 2464 in 1964 to SCCA racer Bobby Aylward, of Wichita, Kansas. After its underwhelming initial results, Mr Aylward opted to increase the car’s raw power by installing a 4.7-litre Ford V-8, as he hoped to get a few more chequered flags out of the famously handled chassis. But additional DNFs at Green Valley, Texas, on 20 February 1966, and Stuttgart, Arkansas, on 25 April, signalled the twilight of 2464’s documented in-period racing career. Mr Aylward soon donated the car to his mechanic, Ernie McCoy of Arkansas City, Kansas, who eventually replaced the Ford engine with a Chevy block at Steve Foristall’s shop in Houston, Texas.