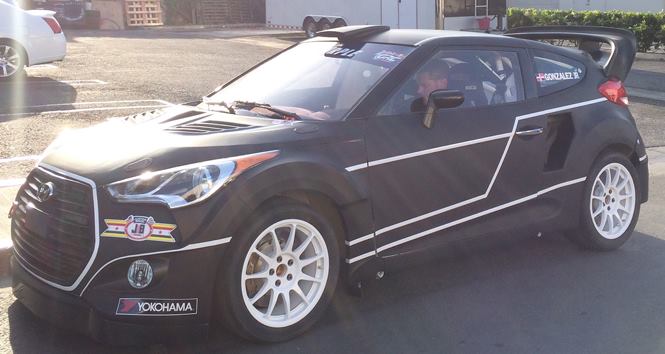 Gonzalez, Jr., a Puerto Rican native, is the first Caribbean racer in the history of the sport. He first entered the US racing scene in 2009, competing in the Nationwide and Sprint Cup NASCAR series, and has steadily built his racing resume while growing his fan base back home. His partnership with RMR represents hope to all the young Caribbean racers.

“I am thrilled to work with Rhys’ team. Together we will be an unstoppable force and we’re ready to take on the championship,” Gonzalez said, adding, “I am looking forward to bringing a fun and diverse audience to this up and coming series.”

Team RMR (Rhys Millen Racing) is excited to support Victor with his new found challenge in the sport of Red Bull Global Rallycross. There are many new obstacles to overcome for round one but Victor’s success behind the wheel in pavement racing will be a strong foundation to build out the overall skill set required to tackle the dirt, jumps and pavement that make up the GRC courses.

The Red Bull Rallycross series has proved amazing growth in the recent years and it continues to be on the rise. The series combines the best aspects of circuit racing, off-road racing and rally competition to deliver intense action in a variety of fan-friendly environments. A highlight of the course is a massive jump that sees cars launch over seventy feet through the air. This fast paced, adrenaline-packed, and high-level energy series is exactly what motorsports fans have wanted to see and experience.

Honored to represent the Hispanic community, Gonzalez Jr. is ready to be in the driver’s seat for the growth that lies ahead.