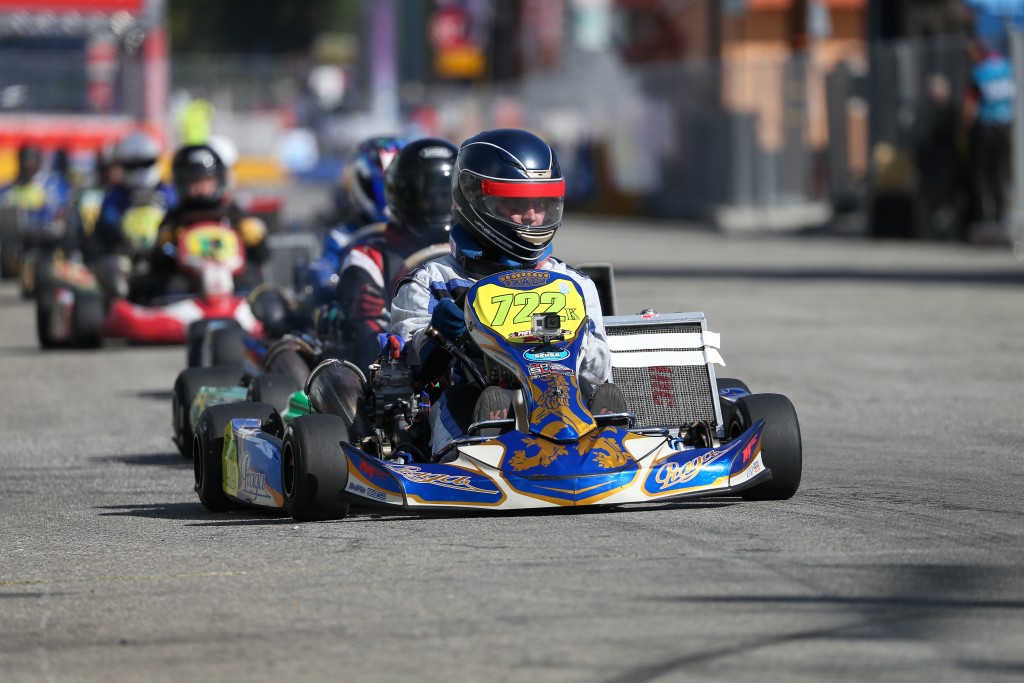 10 race classes and nearly 150 drivers took to the streets of downtown Lancaster, Ca to fight it out on the fastest kart street race on the west coast, the SKUSA Streets of Lancaster GP!  The event was put on by Tom Kutcher and Super Karts USA, and was the finale to the California ProKart challenge series.  The event is classified as a regional race but attracted national level competition, for instance in the premier race class the top 5 drivers where the top five in the country!  The temporary race track was fast, thrilling and required mental focus, the course was lined with barriers that were not forgiving as many drivers would find out!  Shifter Kart racers would see nearly 90 mph down the back straight on Lancaster Blvd before dropping 3 gears for a 90 degree left hander towards the start finish.  Sponsored by Sierra Toyota Scion the event had lots of entertainment for spectators, a jumbo tron with live race broadcasting and commentating by Rob Howden of ekartingnews, Beer Gardens, Live music and tons of entertainment the event was family friendly and drew an estimated 10,000 plus spectators over the events 4 days of racing.  The Final two days highlighted SKUSA racing with Sunday’s main event determining the winners.

I could not let an event like this pass me by, i registered a week before and called Musgrave Racing to get  my pit spot.   I broke in a new top end and shook the kart down the weekend before the race, I had the last round of Pro Tour winner and one of the fastest kart racers in the country, Billy Musgrave drive my kart for a few laps and found some small issues to sort out.  After replacing my chain, sprockets and readjusting my clutch my 2015 Praga Dragon Evo felt like a rocket ship!  We moved into the pit at Lancaster on Friday and after all the choirs were done we were able to walk from the pits to restaurants by turn 5 and enjoy the night. 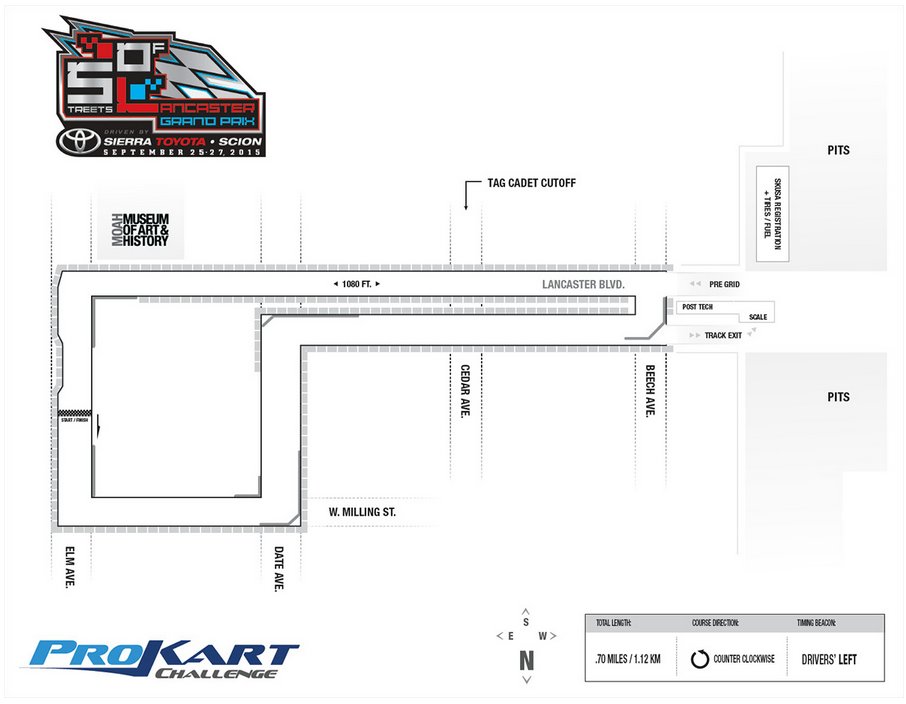 The morning brought two rounds of 10 min practice for all race groups.  My race group (s3/s5) were the first run group in the order and got to tackle the virgin racetrack!  It was dusty for the first few laps but overall grip was pretty good and we could tell that SKUSA put together an awesome track.  All of the drivers on my team put new tires on for the first practice in-order to work on setup right away, we had supervision from Travis along with the Musgraves and had some strategy’s at play to move the entire team forward.  After the first few dusty laps we picked the pace up and started to feel for the limits, with a couple drivers finding the limits, and the tech-pro barriers that follow!   As a team we had a break down of events and set our objectives for the next practice session. 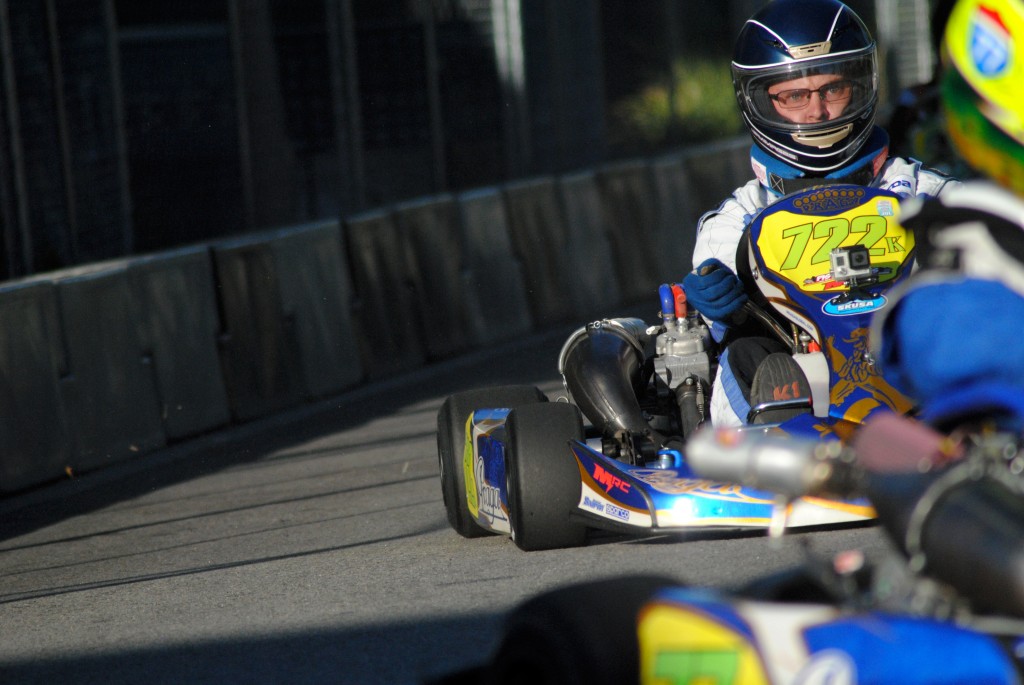 Practice Two was a mock qualifying for us, we spread out and tried to push in clean track to see what we could do and how the  setups felt.  The Pragas where amazing on this racing surface, providing tons of grip and confidence inspiring handling.  At this point it was apparent that Aaron Schmidt, Robby Heck, Garrett McKelvie, Josh Early, Matt O’Donnell and myself where at the front of the S3 field. 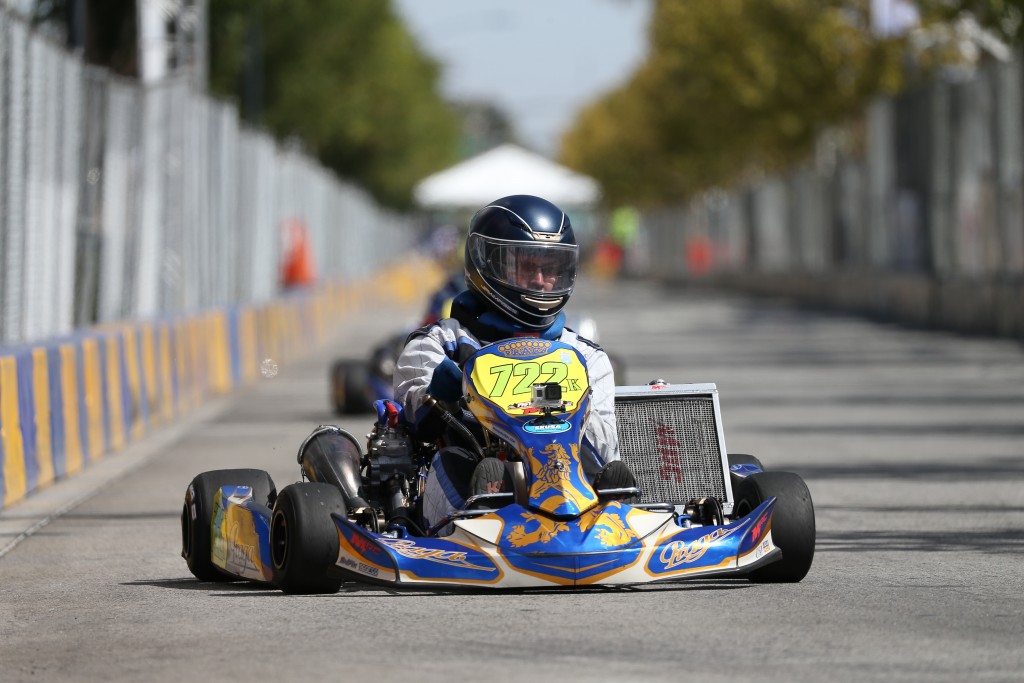 Qualifying was interesting as 80% + of the laps had a yellow flag at one corner or another!  Passing is possible but difficult on a street course like this, this puts a huge premium on qualifying results. Needless to say many drivers had pushed too far and found barriers on several of the fast corners.  My initial strategy was to get a gap on the first few laps and then push hard once the tires and track came to me.  This backfired huge as all of my flyers had a caution were i was forced to back off the throttle and navigate the corner safely.  Robby Heck Set the pole with a time of 41:898 followed by Aaron Schmidt with a 42:110 and Josh Early with a 42.280.  I found myself down in 7th place with a 42:516. 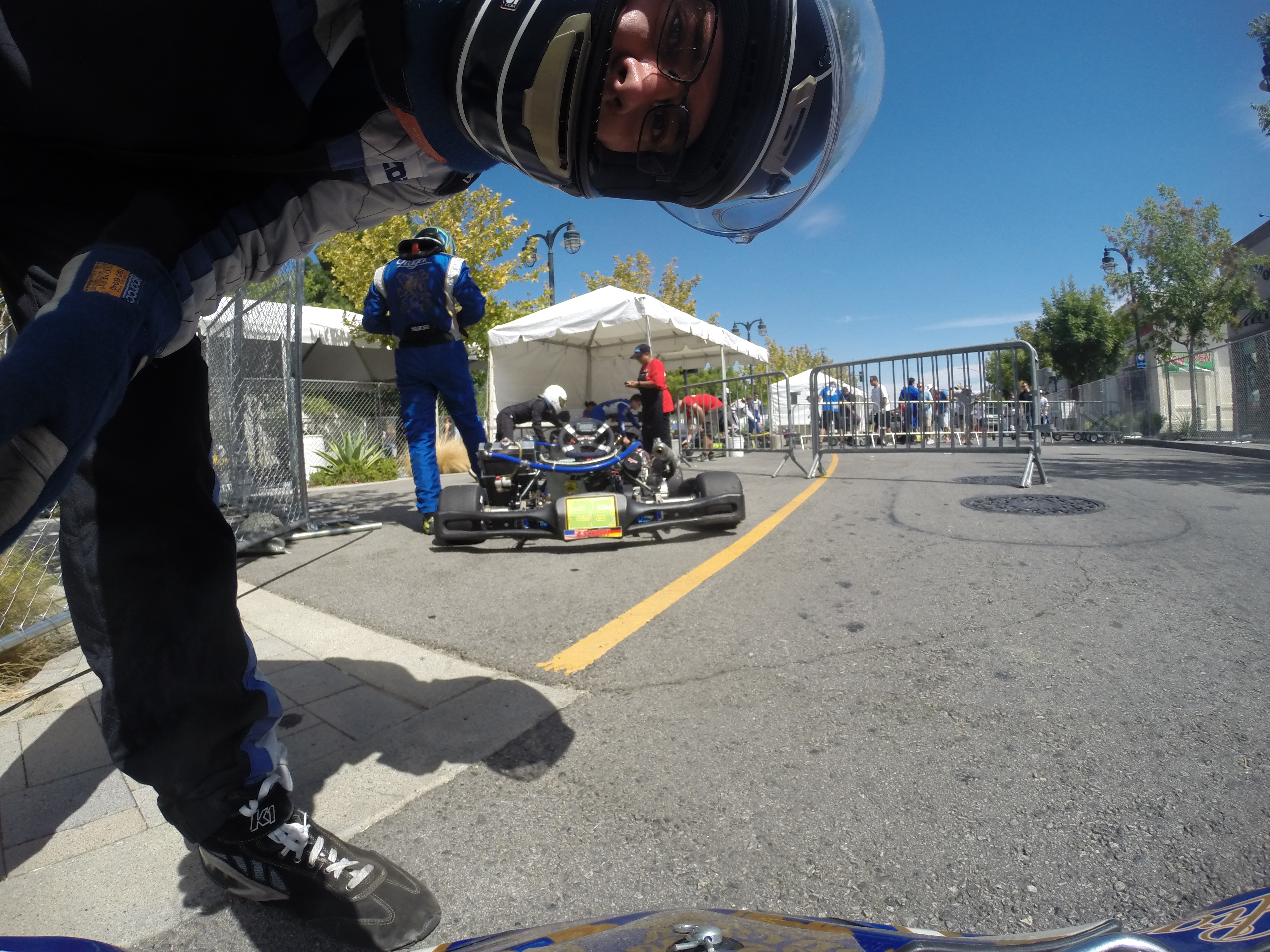 Standing starts are thrilling and require alot of skill to master perfectly, karting tires have a ton of grip and do not slip like a dirt bike does on dirt.  Needless to say how you slip the clutch while going to full throttle can make or break your start; It broke mine!  I like to drop the clutch in two “stages” the kart in front of me had a slow initial stage and i had a great first stage slip, however i was greedy and dropped it too fast for the final bit of the release.  My kart bogged and i was passed by 5 karts! bringing me from 7th place to 12th going into turn one.  i was able to get two spots back by turn 3 however i should of been moving forward from 7th and not 10th position.  In the end i would up battling my way up to 5th.

Sundays morning warm up was just a shake down for us, we were told a strategy and adhered to it as a team.  We all pulled off early and started our prep for the final heat race before the main event! 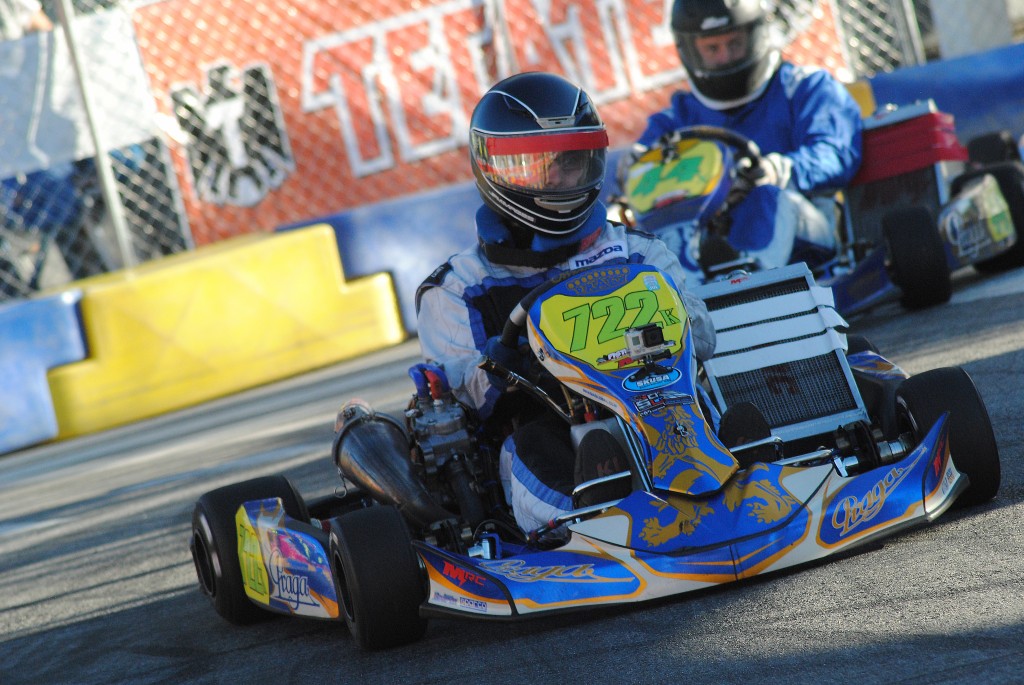 In Heat Race two i started on the inside row in 5th position behind Garrett Mckelive.  My start was better this time and i didn’t loose any positions!  for the first couple laps we stayed in a line for the most part and kept it clean.  Garrett passed Josh and i started to have a battle with Josh.  I traded positions with him for a few laps until he ultimately got me back and got the job done.  After the heat one of the front runners, Robby Heck, was disqualified for having to large of a rear track width.  I would now start the main in 4th and have a shot at the podium in the largest race i have ever entered.

I had my best start of the event in the main and this was the race i was saving my kart for… it was make or break, go quick or wall it!  Starting on the second row was great.  Josh Early who had been fast all weekend messed up the start and i was in 3rd place for a millisecond before Matt O’Donnell rocketed it up to 3rd in front of me before turn one.  The first four karts where in a pretty tight group until Matt started to make small mistakes and i started to battle with him for 3rd position.  I passed him going into the hair pin and then he stuffed it to me at the end of the back straight before the start finish.  The next lap i had a massive run on him going into the hairpin and went to pass him again, we were side by side on entry, with myself having the preferred inside line, he started to turn in on me and i checked up however we had a very soft bump, Matt got unsettled and eventually had contact with Robby who was charging hard from last place (after his dq in qualifying).  Matt and Robby collided and where both out of the race.  I did not know i was in free air and kept charging to hold my podium.  At this point first place Aaron Schmidt and second place of Garret McKelive had a huge lead over me (due to the time lost fighting with Matt) and had the advantage of drafting on this extremely fast track.  I worked my butt off but was unable to get close to them.  Aaron won the race with Garrett a close second.  I was extremely happy to podium at my first SKUSA race of the year, especially on a track as awesome and mentally demanding as the Streets Of Lancaster.  Josh Early finished 4th, making the top 4 karts in s3 MRC powered Pragas!

After the race was over it sunk in what i had accomplished, i am extremely grateful to Travis, the Musgrave’s and everyone who races under their tent as our podium sweep was a team effort.  Open pits pay off and on this day the best driver won in our class!  Congrats Aaron Schmidt, Garret McKelive, Josh Early, and Alon Michel (s2) for your outstanding results. I want to thank all of the city workers, Sierra Toyota Scion, SKUSA and all of the spectators that made this event something to remember.  After my first street race i am hooked and will be back for more! 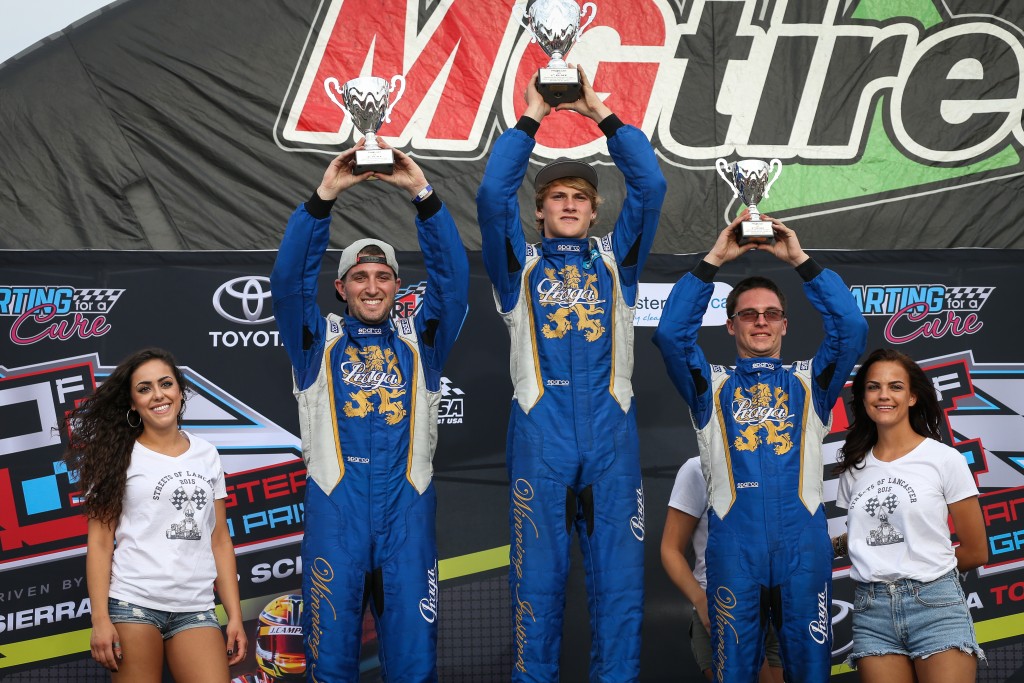