Audi has won the Nürburgring 24 Hours exactly one week following the brand’s 13th success in the Le Mans 24 Hours. Phoenix Racing with the Audi R8 LMS ultra celebrated a hard-fought victory in its home round in the Eifel. Ernst Moser’s squad had previously taken the honours in the race through the ‘Green Hell’ with Audi’s GT3 sports car in 2012. With 159 laps the R8 LMS ultra set a new distance record this year. For the first time ever, a Nürburgring winner covered more than 4,000 kilometres – the successful Audi squad completing exactly 4,035.102 kilometres. 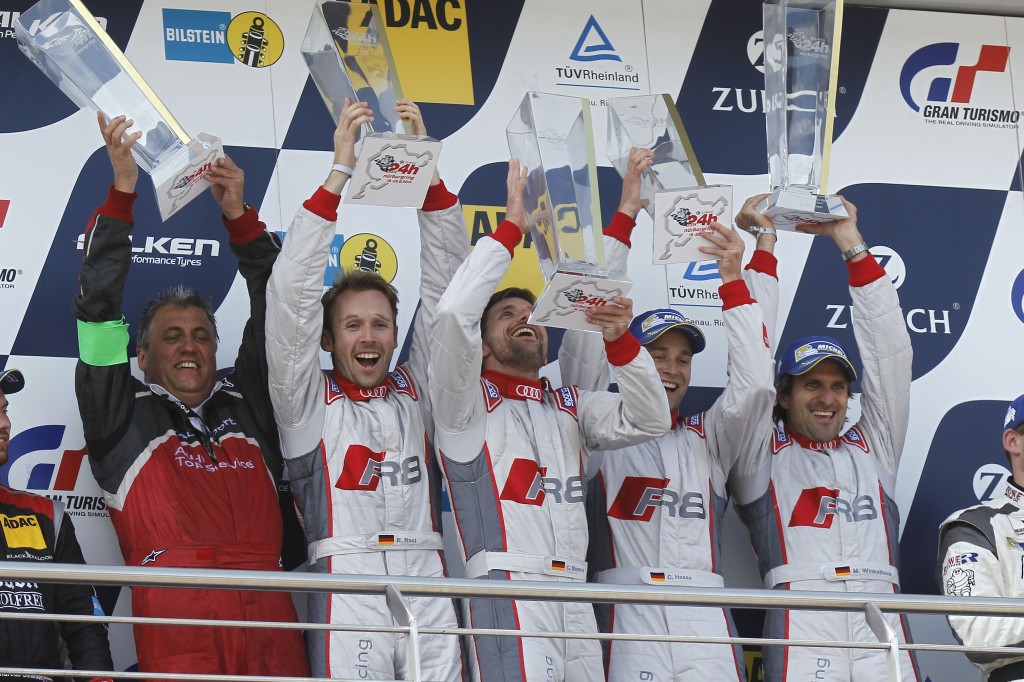 This year, the classic endurance race in the Eifel proved to be a true thriller. The ‘marathon’ had seen a turbulent beginning at a high pace with many incidents, and by the time the sun rose on Sunday, if not earlier, it had turned into a real sprint. In the early morning hours, the fans watched an amazing duel for the lead. With a tenth-of-a-second gap Christian Mamerow in the #4 Audi was battling with the Mercedes of the Black Falcon team. Following position battles across several laps, the Audi driver prevailed and, taking turns at the wheel with with his team-mates Christopher Haase, René Rast and Markus Winkelhock, gradually extended the squad’s lead in the final third of the race. But the team never had any time to relax, as five different marques were battling in the top six positions, with the top three teams running on the same lap for a long time. In the end, the driver quartet won with an advantage of 2m 59s. The second-best Audi to cross the finish line was the R8 LMS ultra of the Audi race experience. Stratosphere jumper Felix Baumgartner and his team-mates Frank Biela, Marco Werner and Pierre Kaffer reached the finish in ninth place. With that, Baumgartner managed a much-noted, successful debut in the classic endurance race. Team Twinbusch was the third Audi squad to achieve a top ten placing. Following an impeccable drive, the privateer team with Dennis Busch/Marc Busch/Stefan Landmann/Manuel Lauck trailed the Audi race experience in tenth place at the checkered flag. 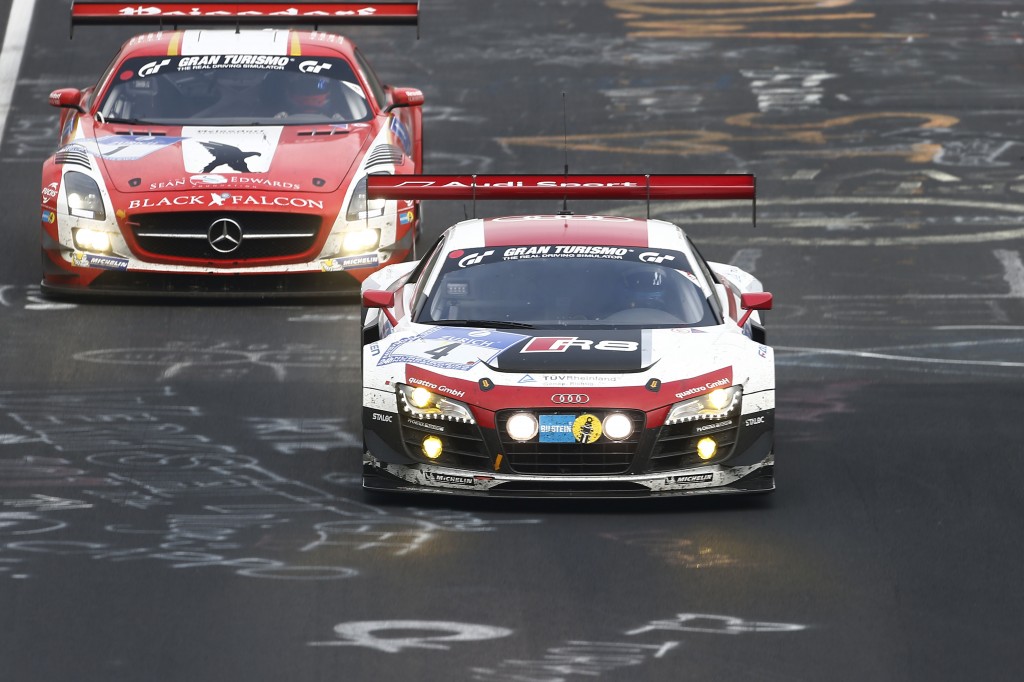 While Christopher Haase and Markus Winkelhock had been part of Audi’s 2012 winning team, today marked the first overall victory for Christian Mamerow and René Rast in the iconic endurance race in the Eifel. The brand’s victory was complemented by three Audi customers achieving success in two classes. Raeder Motorsport won the SP3T class ahead of LMS Engineering. Both teams relied on the Audi TT RS. In the SP4T class, the Besaplast Racing team prevailed with another Audi TT RS.

Phoenix Racing was unfortunate with the #3 Audi R8 LMS ultra of Marc Basseng/Marcel Fässler/Frank Stippler/Laurens Vanthoor. Basseng had an accident on Saturday when braking in front of the Hohenrain chicane but was not injured. Teams Prosperia C. Abt Racing, G-Drive Racing and the second Audi race experience car had a turbulent race. Following a puncture and a penalty, Christer Jöns/Niclas Kentenich/Christopher Mies/Dominik Schwager of Prosperia C. Abt Racing had improved to seventh place by the 14th hour of the race. But a damaged drive shaft and transmission change subsequently caused car #10 to drop to 62nd place. The Audi ultimately crossed the finish line in 34th position. 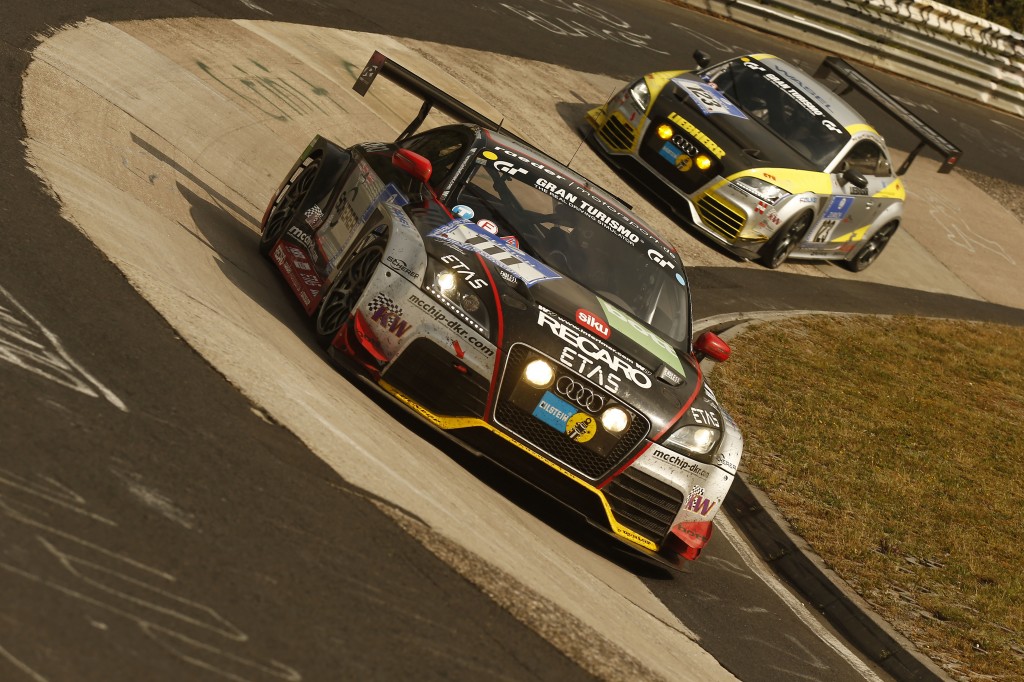 The sister model, car #9, had been running in the top ten as well when shortly before midnight a puncture following contact with another car in the field meant an initial setback. After a transmission change on Sunday morning, Alexander Müller/Marco Seefried/Nicki Thiim/Richard Westbrook dropped to 12th place. Two hours before the end of the race, the squad decided not to keep the car in the race. G-Drive Racing had initially achieved a good position as well. After starting from grid position 17, the Belgian team had improved to eighth place in the first half of the race. A change of the transmission and the heat exchanger cost the car of Nico Müller/Stéphane Ortelli/Roman Rusinov/Edward Sandström a lot of time, which meant the end of the race in the 20th hour. The #18 R8 LMS ultra of the Audi race experience, following several repairs due to accidents, took the checkered flag in 23rd place. 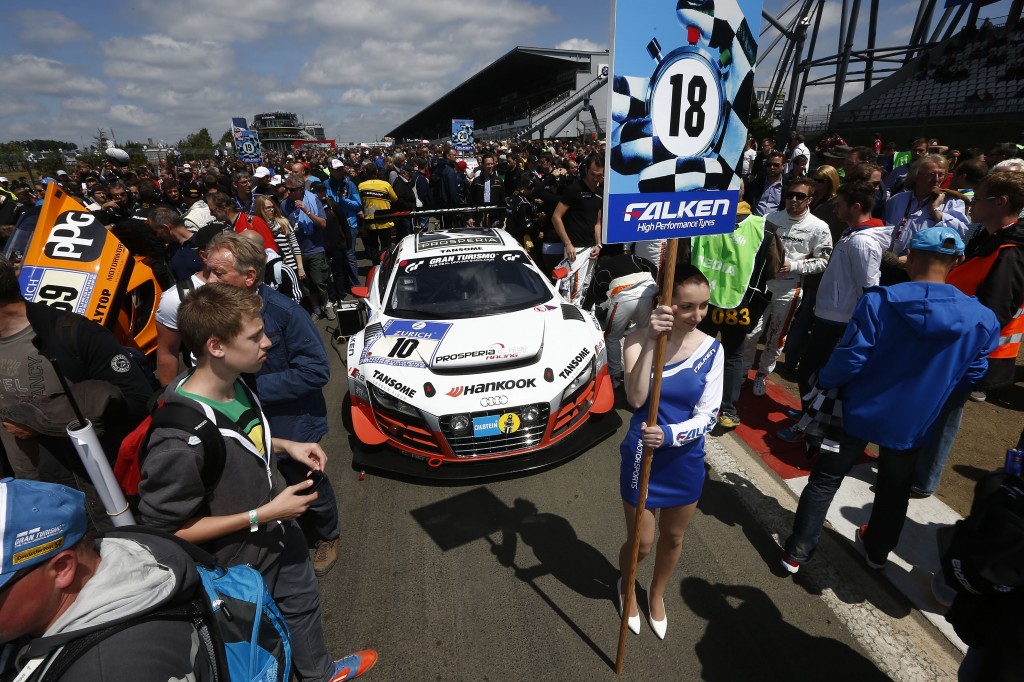 “Sincere congratulations to the winners and a sincere ‘thank you’ to our customers for their appearance at the Nürburgring,” said a pleased Romolo Liebchen, Head of Audi Sport customer racing. “We saw a true classic this weekend in which all the qualities of endurance racing were crucial: first-class technology, reliable drivers, a good strategy and a solid team performance. I’m happy that we managed to clinch our second victory in three years against such fierce competition in one of the world’s toughest endurance races. Congratulations also to our customers in the SP3T and SP4T classes. For Audi Sport customer racing, the weekend could hardly have been more successful.”