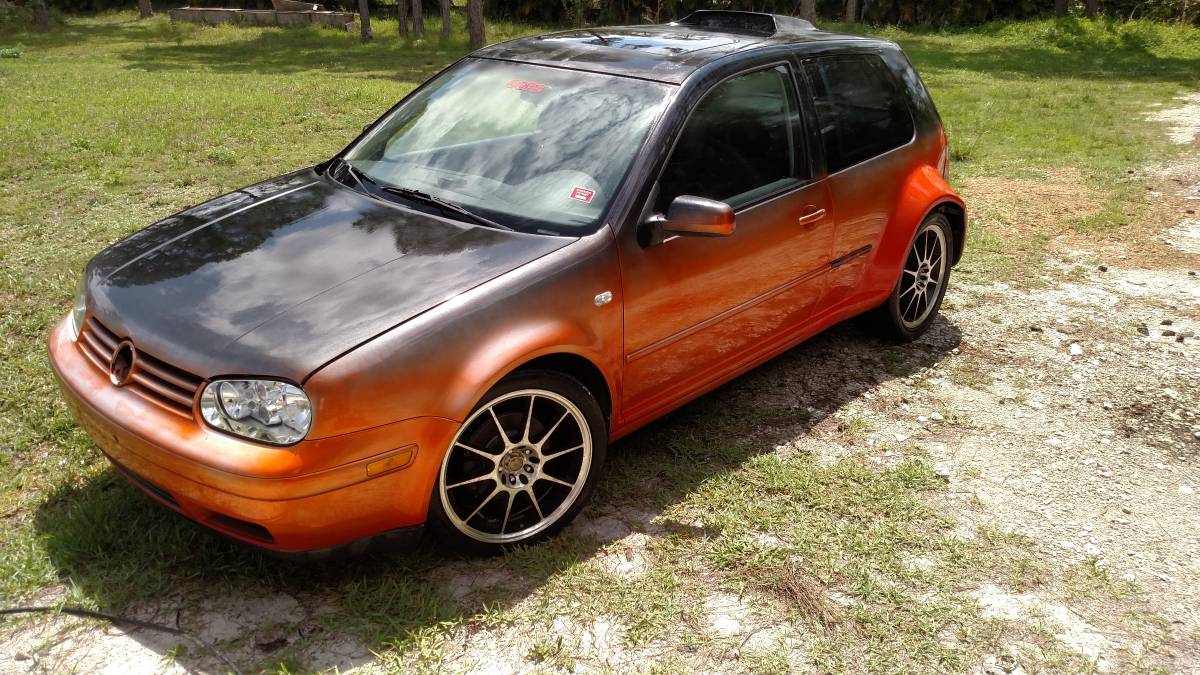 This project is awesome. Sure the paint is a bit off and the rear fender flares are bit large for the tires they chose but the engine is mounted in the rear and a gas tank is now where the engine used to be. Its like a modern Group B Metro. Only without all the Group B stuff. One of you guys needs to buy this! Put a cage in it and rally it! Or something, but I want to drive it! 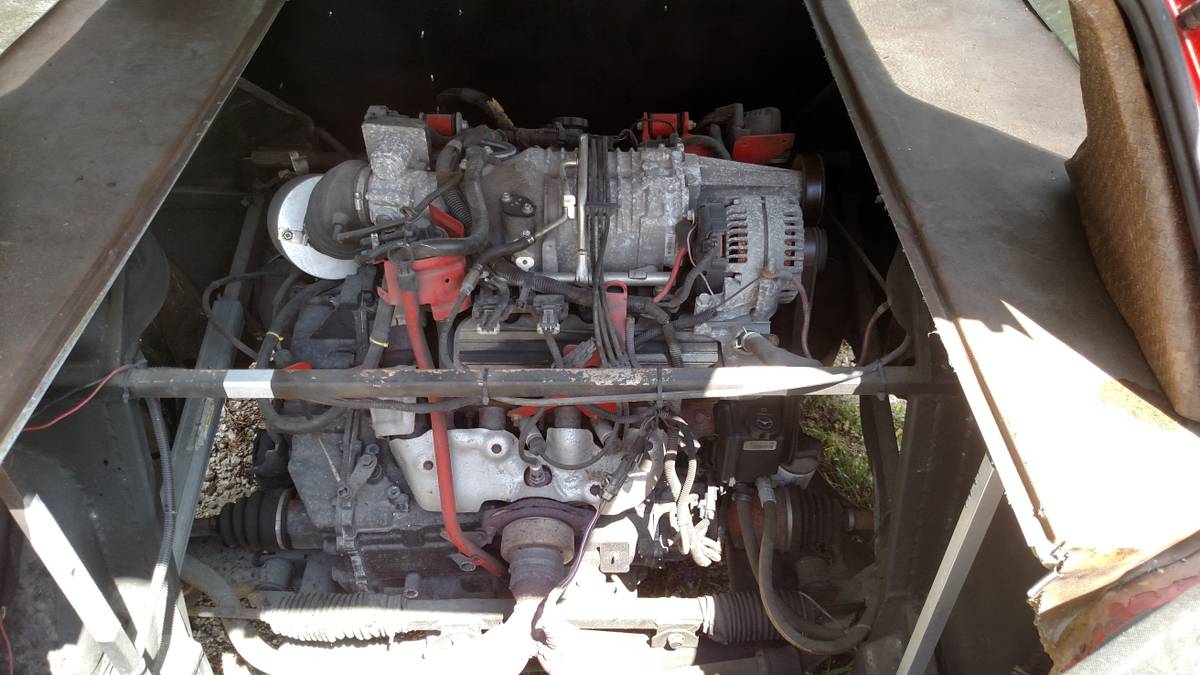 It appears that the previous owner did the engine swap and he says the mechanical mounting of everything is legit, but the wiring sucked. So he rewired the entire car and made it work right. He then replaced the brakes, fuel pump, some suspension and put on fresh tires. 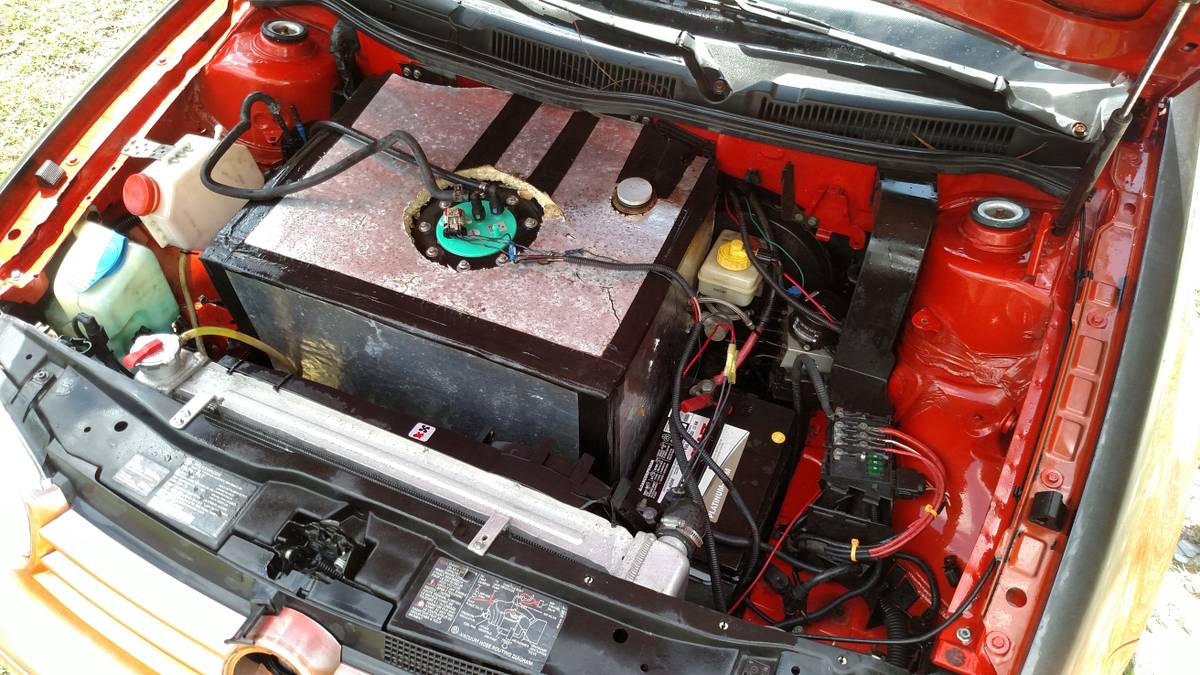 In case you missed it, the engine is not a VW, but rather a GM V6 with a supercharger from the Pontiac GTP. That means 260hp and 280 ft lbs of torque! Check out the gauges. They are also from a GTP and apparently they work! 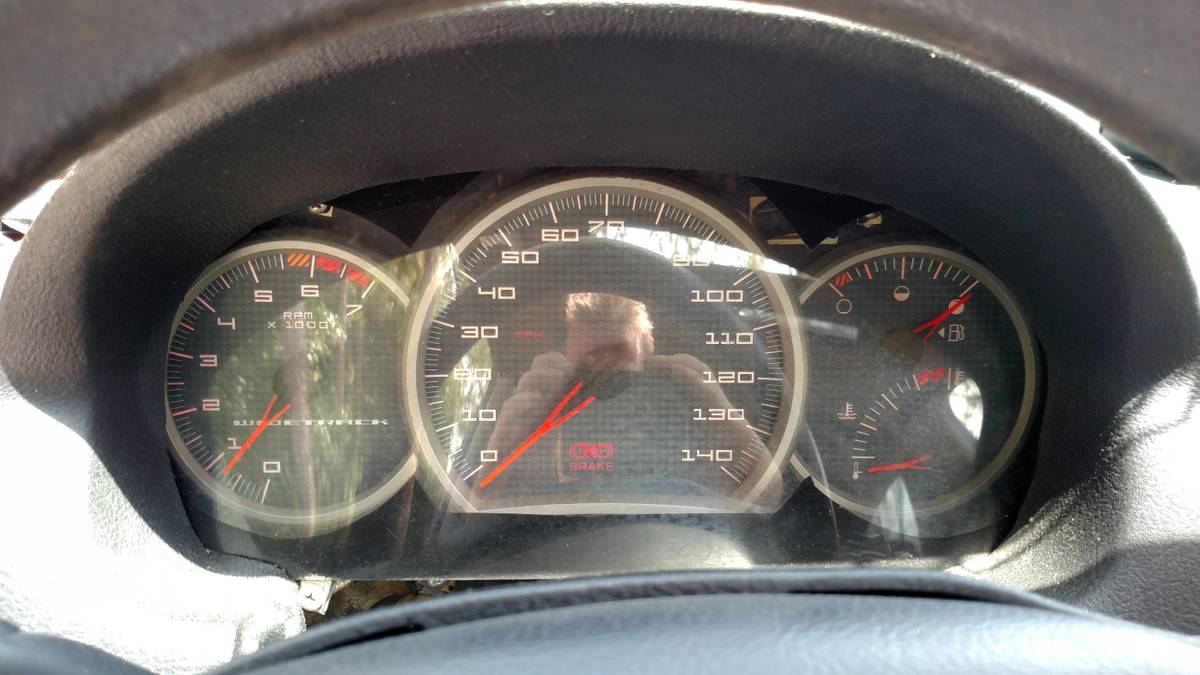 He also points out in the ad that they did the engine swap by grafting the entire GTP subframe that holds the engine and front suspension into the back of the VW so all the parts swap normally. 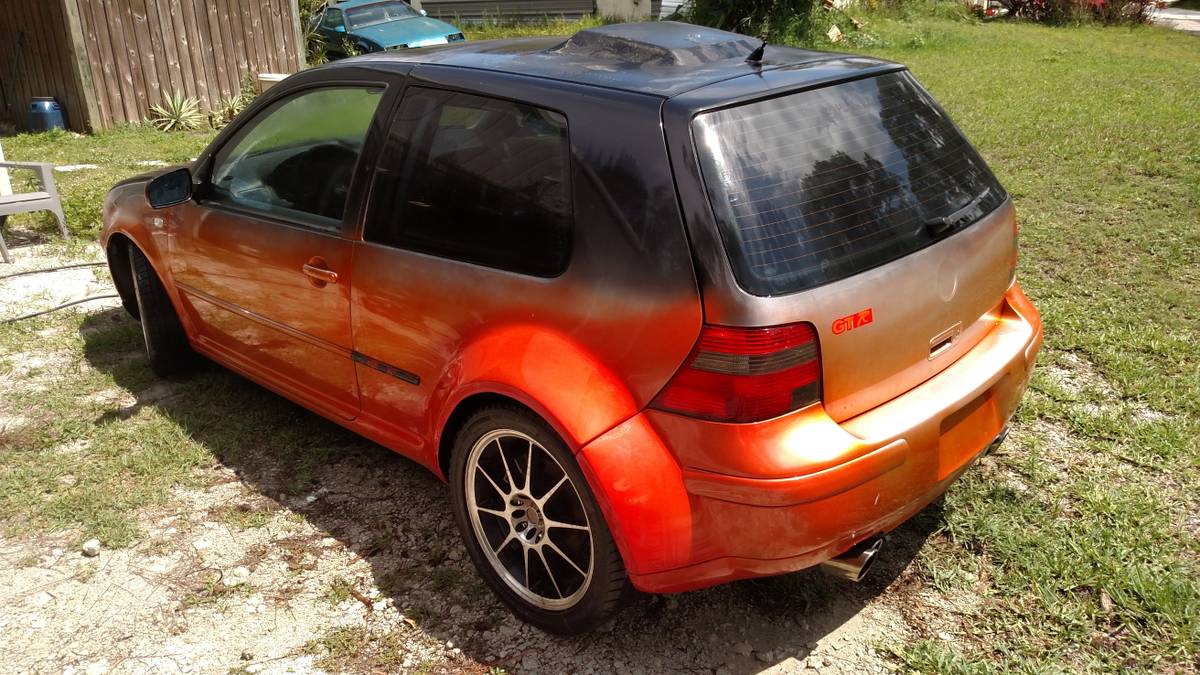 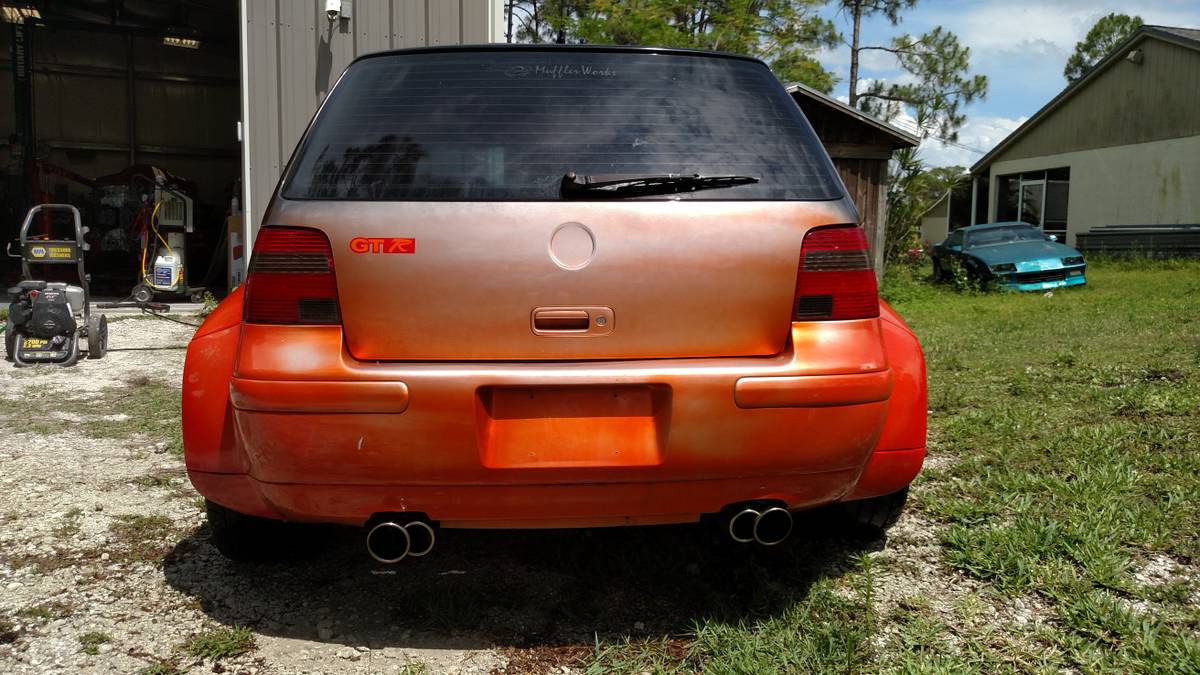 Even the interior is decent with fresh seats. 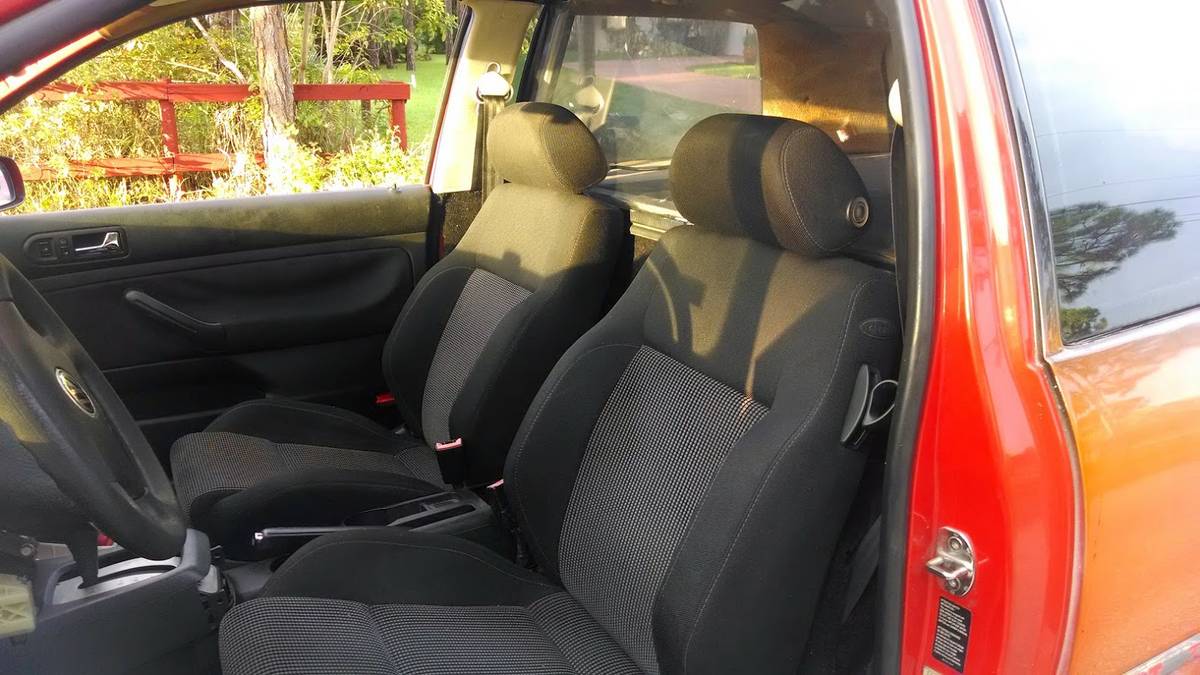 And its all yours for $3,000 which seems like a steal to me!
Here’s the original ad for anyone curious after the car has been sold.

I know a lot about this car but I don’t know everything about it. When I got it it didn’t run. I did not originally do the mechanicals on the swap, but 3800’s have a sweet spot in my heart and I took this one in. Someone paid a ton of money to have the engine swapped in. All of the fabrication work to mount the engine and transmission looks great and professional. The electrical portion of the swap was terrible (hence why it didn’t run). I re-did all the wiring through the firewall to the ECM, BCM, fuse block, and ignition. I also made a new firewall out of sheet metal (top portion is plexi) Now it runs like it’s supposed to and starts with the GTP key. I also installed new brakes front and rear, new fuel pump in the fuel cell, new front struts, new headlights, and put on new tires. I also put in some stock GTI front seats, and started switching some of the interior trim to stock (previous owner had questionable taste). When I connected my computer to the OBD the computer shows the GTP only had 24K on it.

The swap was completed by modifying the GTI chassis to accept a complete GM W-body front subframe. Basically, you could just unbolt the whole front subframe from a GTP, and bolt it into the VW. Since the entire subframe is reused, parts are easy to find and cheap. The entire suspension, brakes, etc are from the front of the 2004 GTP. So theoretically, if you wanted you could get a FWD LS4 V8 subframe and bolt it into the GTI (with all new electrics of course).

The front suspension on the GTI is stock, it has lowering springs but sits at basically stock height since there isn’t the weight of the engine up front. I tried stock springs on it and it looked ridiculous.
Fuel cell and battery are under the hood. Not sure how big the cell is. The car has a custom widebody kit molded into the rear quarter panels.

Interior wise the stock cluster has been replaced with the cluster from the GTP (it works). Paddle shifters from the GTP have been adapted to the GTI steering wheel. Windows/sunroof work most of the time (typical VW …). Some of the trim has been replaced with stock, some of it still has this weird snakeskin leather wrapping on it from the previous owner. Easy to find replacement pieces from the junkyard as there is no shortage of Jettas/Golfs out there. Floor shifter was taken from the GTP and used in the GTI.

Power steering works, radiator is up front with hoses routed in the center tunnel. AC compressor is on the engine but no hoses were ever made. Would be simple to add AC to the car.

All the work (that I did) on the car was done about a year ago and the car has been sitting since as I have had no more time to work on it. Still starts and runs fine. Paint is OK, clearcoat on the roof is peeling but the rest is in decent shape.

CONS:
Sunroof leaks
Some missing interior trim
Clearcoat peeling on roof
No center console (never found anything that fits well)
Been sitting for a year. Fresh battery but needs some cleaning and TLC. Not a perfect car, it’s a project.