While getting ready  for the 2016 Baja 1000 I realized I needed a new helmet. Given the amount of dust and dirt and silt and sand that we face while racing in the desert most will tell you to get a forced air helmet.

Before I started shopping I started looking around. There are different styles with them falling into two main categories: top air and side air. Some makers offer helmets that can do either/or, like Bell or Zamp, but they have odd-shaped air inlets. Given the amount of uncertainty with our car, I thought it would be best to eliminate one variable with the air inlet type. So I focused on top air or side air only helmets.

I’ve owned both Bell and Impact helmets since I started driving, so I know how they fit. But, that immediately narrowed me to the Impact given the air inlet type.  I’ve also worn a Pyrotect, which I didn’t love. Other brands that offer forced air helmets are G-Force, HJC, Simpson, Stilo and more. And, the prices are all over the place.

As I have not owned (or even experienced) a forced air helmet I went to Google to find out what others say with far more off-road racing experience than I have. Basically, it comes down to a few things, which I included in a table below. 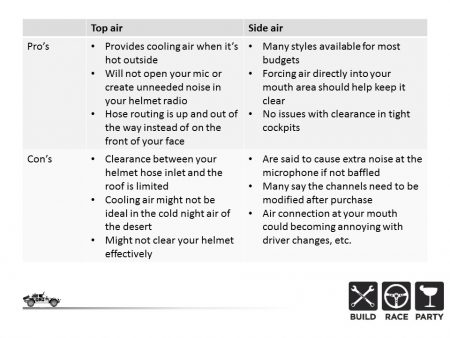 As I race Sports Cars on road-courses more often, I was concerned about the headroom, but the idea of my voice getting drowned-out in the microphone was a serious issues, as well.

Then, in comes Impact with their Air Draft OS20, which means “offset 20 degrees from the center.” 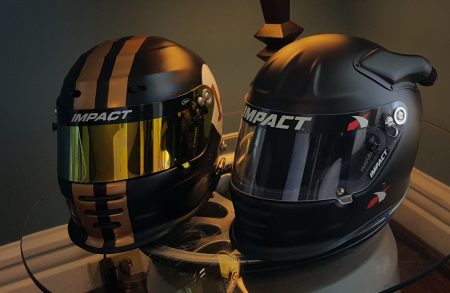 This allows for a lower profile helmet, while offering top-air input. The air enters the helmet and goes through a series of channels that run between the padding and the outer shell. The air flow is pretty remarkable and it feels like a steady wind blowing over your forehead.

A visible difference in the details

As you can see there is quite a bit of difference between this “air” version of the Draft helmet and a non-air version. For comparison, I have been using the Draft helmet since 2007. It’s been a great helmet. Although it isn’t a carbon lid, it’s Impact’s composite helmet made of a fiber weave. 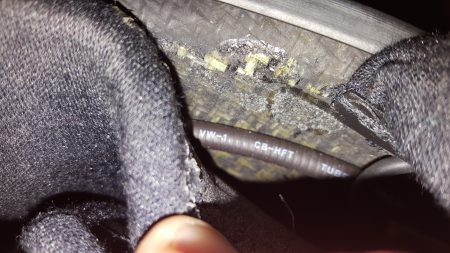 Both helmets weigh in around 4# with wiring for intercoms. The Air Draft actually read 4.25#, but I didn’t remove the helmet skirt I have installed. Still, the helmets feel lighter than the old Bell helmet I used in the early 2000’s (Bell M3, I believe), which tips the scales around the same 4# (without wiring).

Both models of the Draft incorporate a lower chin “bill” design, which is supposed to reduce helmet lift in open air vehicles. While not noticeable in my Spec E30, as most desert race vehicles do not have windshields, this is ideal. Having a helmet lifting at speed would be annoying, plus it would likely make the air flow less effective.

Speaking of air flow, neat little details have been incorporated into the helmet to help keeping the fresh air in and the dirty air out. One obvious area is the mouth guard area. On the Air Draft this is molded closed while on the Draft it is open to allow for ambient air to enter.

Also, on the Air Draft, the only additional openings in the helmet are at the rear for some level of exhaust. Plus, there is a noticeable difference in how the Draft was designed with an open-air car in mind (looking at the aerodynamics).

Then, there is a nice little foam gasket around the visor on the Air Draft. This further keeps all the crap that enters the car out, similar to how motorcycle helmets are designed.

Overall, I am pretty happy with this helmet. One negative is I don’t see how the visors would be interchangeable between the Draft and Air Draft (according to Impact’s information, they are). However, it’s made in the USA and meets Snell SA2015 specs (it took about 6 weeks for Impact to make my helmet).

It’s more than I thought I would initially spend (around $850 at most retailers, I got mine from Jeg’s), but as they say, “What is your head worth to you?” I’d add, “And, how comfortable can you make it?”

Check it out on Impact Racing’s site.