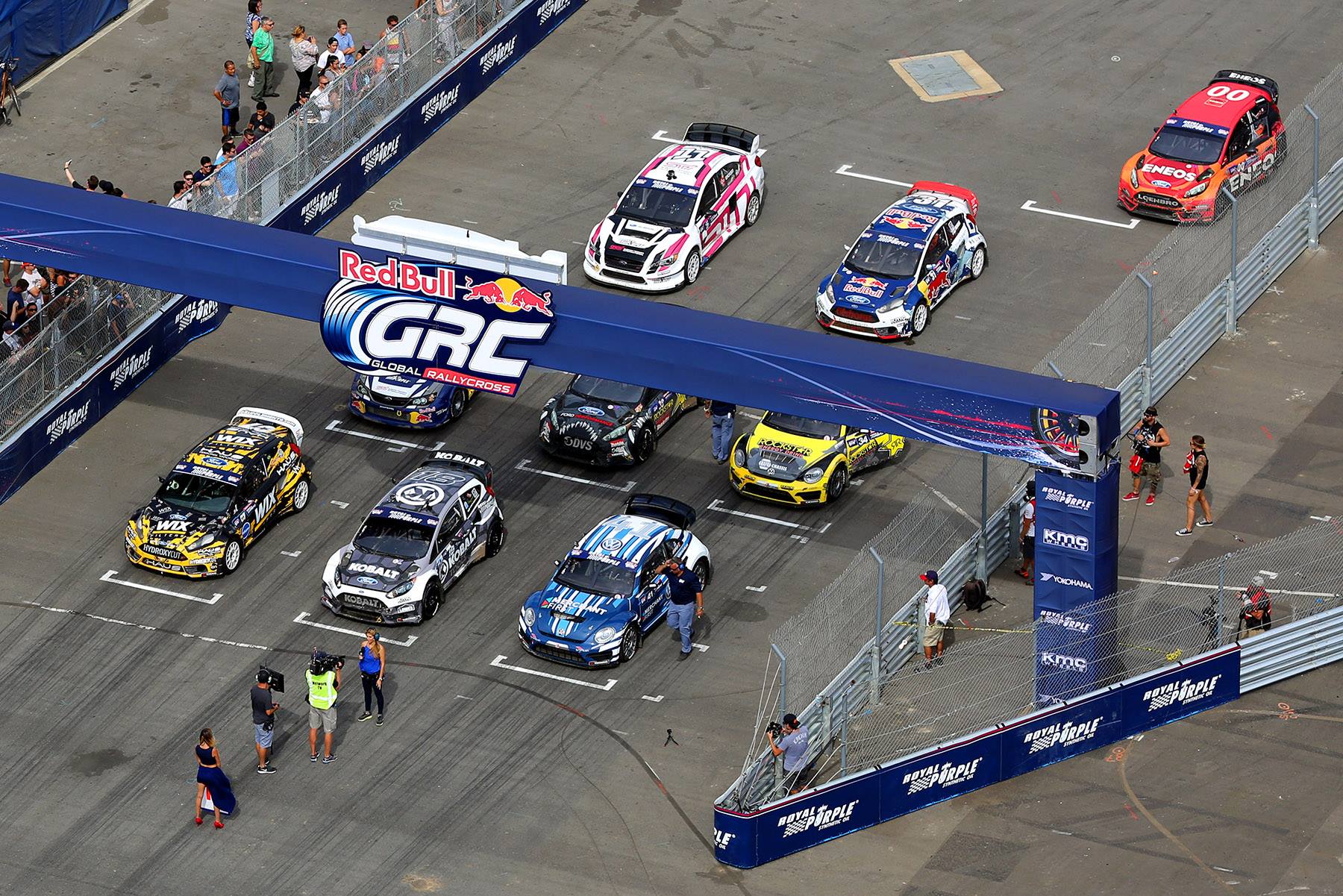 The 2016 Red Bull Global Rallycross season kicks off with a doubleheader at the Wild Horse Pass Motorsports Park in Phoenix.

Here are the changes to the grid in a nutshell. Most of the regulars are back likeArpin (Chip Ganassi Racing), Patrik Sandell (Bryan Herta Rallysport), Tanner Foust (Volkswagen Andretti Rallycross), and Speed (VARX). Olsbergs MSE have partnered with Honda for the 2016 season, bringing the Civic to Red Bull GRC competition with Wiman and Eriksson at the wheel. Brian Deegan returns for the entire season Chip Ganassi Racing with Steve Arpin as his teammate. Jeff Ward, Deegan’s fill-in for three rounds last year, is moving to full-time status with SH Rallycross. Austin Dyne is returning with a car that saw him take two heat victories and a pole last year. IndyCar veteran Sebastian Saavedra, who will make his debut in the series, will partner Dyne on the team in Phoenix. Rhys Millen will continue his streak of starting at least one Supercar event every year by starting this weekend’s doubleheader.

Missing from the Grid is Ken Block, who’s racing this season in Europe with The FIA World Rallycross Championship, and the entire Subaru squad. Bucky Lasek is awesome and so much fun to watch race. Hopefully they’ll be back soon.

NBC Sports will broadcast of this weekend’s Global Rallycross races from Phoenix on Sunday May 22, from 2-4pm ET on NBCSN. You can also watch via NBC Sports Live Extra online at NBCSports.com/LiveExtra, or through the Live Extra app on mobile, tablet and through the Apple TV or Roku connected TV devices.

At .929 miles, the Wild Horse Pass course features 12 turns, multiple dirt sections, and a Joker Lap that allows drivers to bypass the jump once per race session. 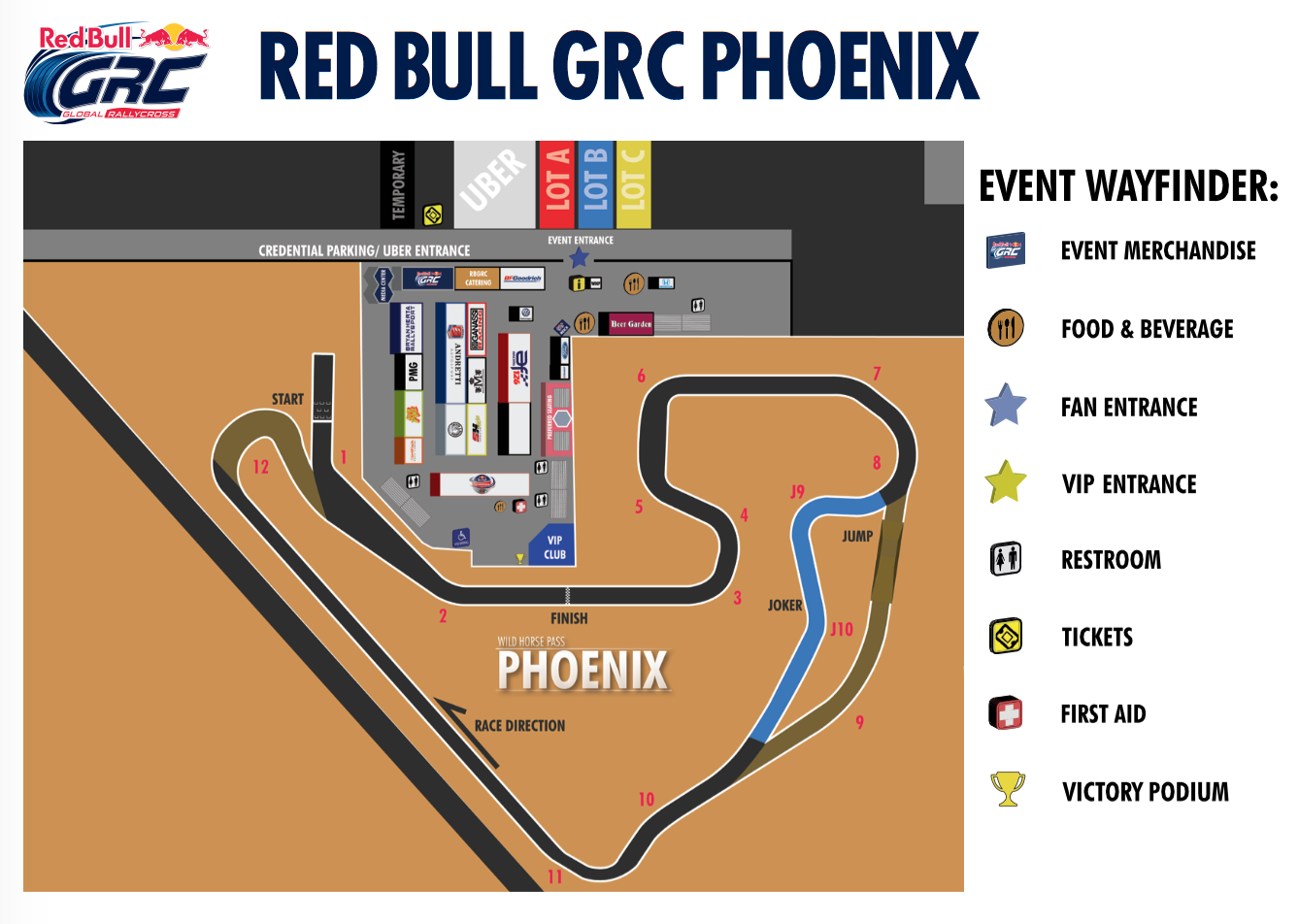 Volkswagen Andretti Rallycross driver Scott Speed won last year’s Red Bull GRC championship by 56 points over Olsbergs MSE driver Sebastian Eriksson. He’ll look to become only the second driver in series history to win back-to-back titles this year, following his teammate Tanner Foust, who accomplished the feat in 2011 and 2012. Here’s the Supercar spotter’s guide to give you a feel for the drivers and what their cars looks like: 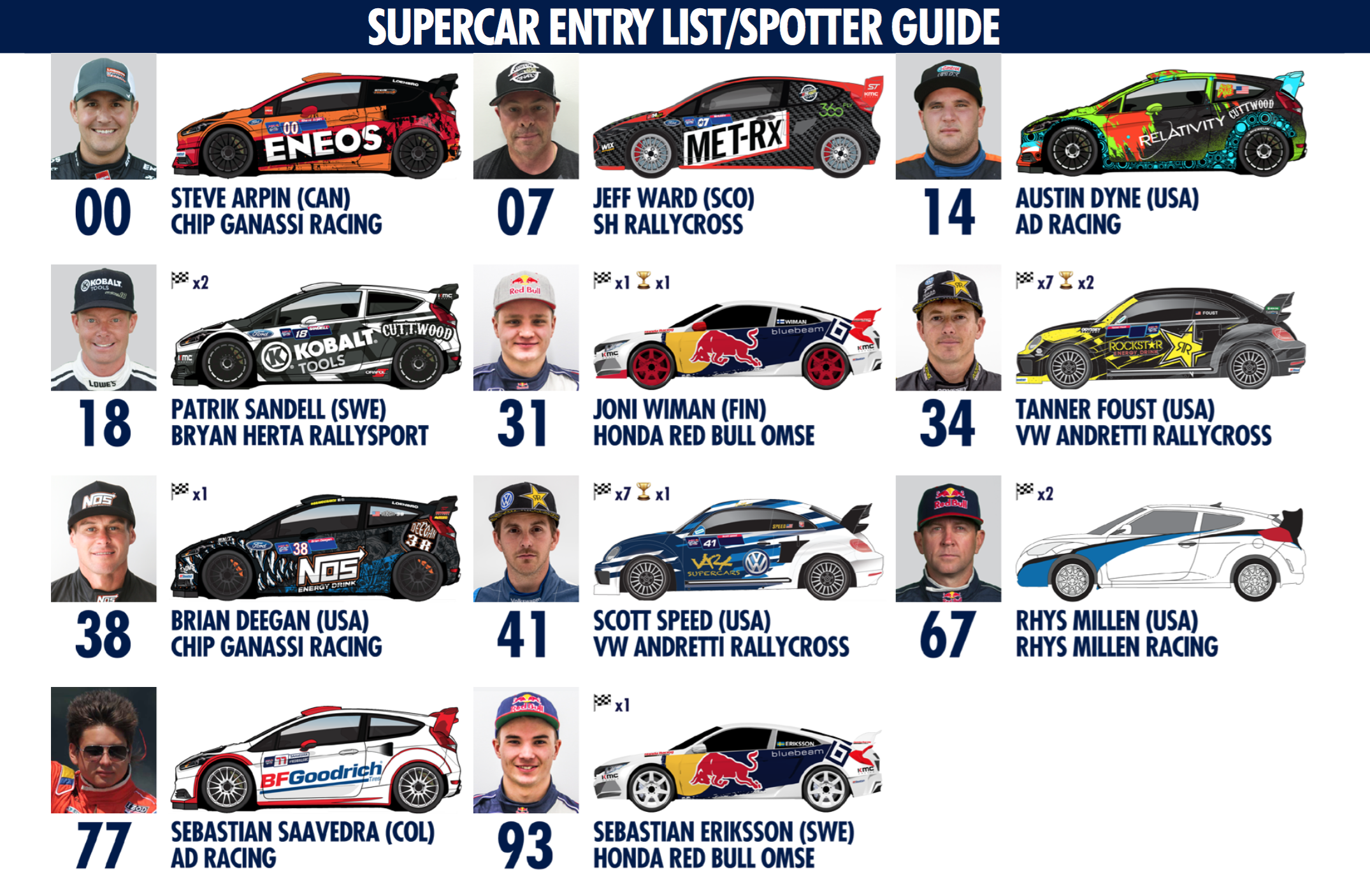 I have no idea where to put these quotes that came in the press release but they’re kind of interesting.

Brian Deegan, #38 Chip Ganassi Racing Ford Fiesta ST: “I think my advantage is that I’ve been to Wild Horse Pass a bunch of times, racing in general in that area. I like Arizona—we have a bunch of Mulisha fans in Arizona, and it’s a cool spot. As far as track time, I think we’re all going to be in the same boat. All of us will kind of be new to that track. I think everyone’s going to be fast on it—it’s going to come down to the starts. It’s a short start straightaway, to the left, and then the first turn and second turn. I think there’s going to be a lot of contact, but it’ll come down to who’s going to be smart.”

Sebastian Eriksson, #93 Honda Red Bull Olsbergs MSE Civic Coupe: “The Civic car is more like a racecar than the other ones that are here. It’s low and wide, which will make it really good on tarmac and we can feel that on the tests as well. But where we stand compared to others you never know. But it’s for sure the best racecar I’ve driven. I would say that the trick in the doubleheader is to not lay back on anything, to qualify first and be in the front all the time. If you are in the back of the pack and try to fight your way through, then your problems come. So we will try to stay up front and go from there.”

Patrik Sandell, #18 Bryan Herta Rallysport: “I was out up on the spotter stand and I looked out at the track and it looks really cool. I really like it. It seems to be very fast and flowing. I think a lot of passing will happen during breaking into course because there it’s not really a lot of places you can drive past people. But you can really break past people if you have the guts. I have the guts, so I’m going to try and use them this weekend!”

The largest full-time field in GRC Lites history will take to the track at Wild Horse Pass Motorsports Park in Phoenix for the start of the fourth-ever Lites season. Oliver Eriksson will kick off his attempt to become the first back-to-back Lites champion as no fewer than seven drivers make their debuts in the series.

This weekend’s top rookie will be hard to predict, as seven of the 13 drivers competing this weekend have never raced in GRC Lites. Out of the newcomers in the field, only Miki Weckstrom enters with race experience in the car, having competed in RallyX on Ice this winter. Here are the grid details for the lites race. 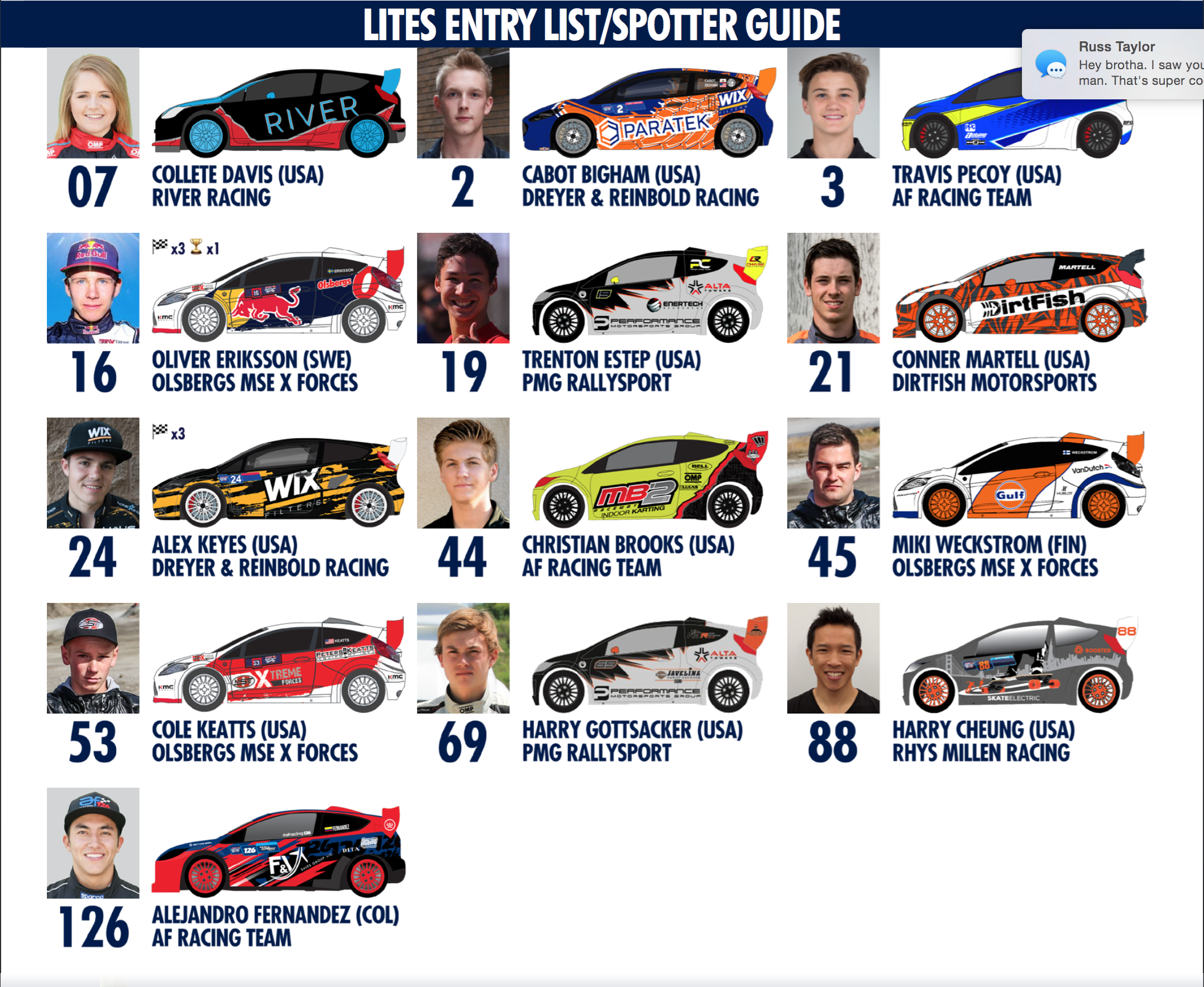 Once again, I have no idea what to do with these quotes but they’re interesting.

Oliver Eriksson, #16 Olsbergs MSE X Forces: “I think mostly the last corner that is completely in dirt will be a good passing zone. That’s where I will gain a lot in from my experience from RallyX On Ice, but mostly because we have been testing a lot. I feel confident with the car and the settings. I think it will be a great weekend for the team.”

Conner Martell, #21 DirtFish Motorsports: “I think the dirt section is going to be pretty tricky because it looks like there is a hairpin that goes from tarmac to dirt. So you’re really going to have to get that transition down really good to make some speed. And I think a lot of people are going to drift really wide there. So I think if you keep tidy on that turn, there’s a lot of good passing that could happen there. I am just super excited to get out on the track. I’ve only seen the track from on the track map, and just looking from the grandstands. But it looks like an awesome track.”

Harry Gottsacker, #69 Performance Motorsports Group: “I haven’t really walked the track yet but it looks really big. I’m really excited to get some top speeds out there and see how fast these things can really go. It should be fun. I think it’ll be a piece of cake especially coming from shifter kart racing. Shifter kart racing is just so crazy—so much stuff is going on, and I really feel like this is going to be a lot like that. The dirt might be al little hairy the first time, but I think I should be able to get used to that pretty quick.” 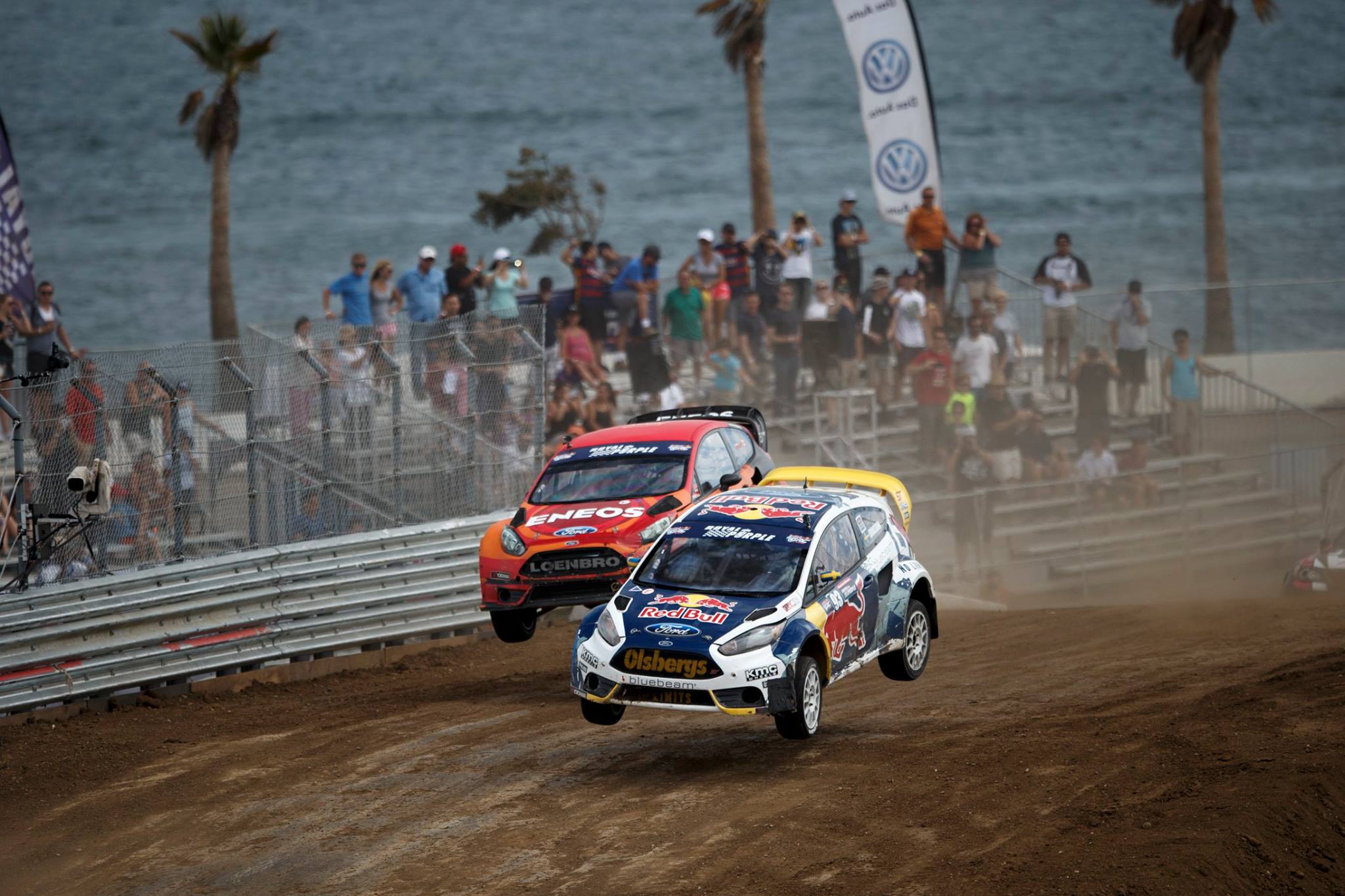