Third race, third victory: Jordan Lee Pepper is the first driver in the history of the Volkswagen Scirocco R-Cup to celebrate a hat-trick at the start of the season. The 17-year-old South African was over the moon as he kissed the cup presented to him by former DTM star and Le Mans winner Manuel Reuter after his victory at the home race of Volkswagen in Oschersleben. 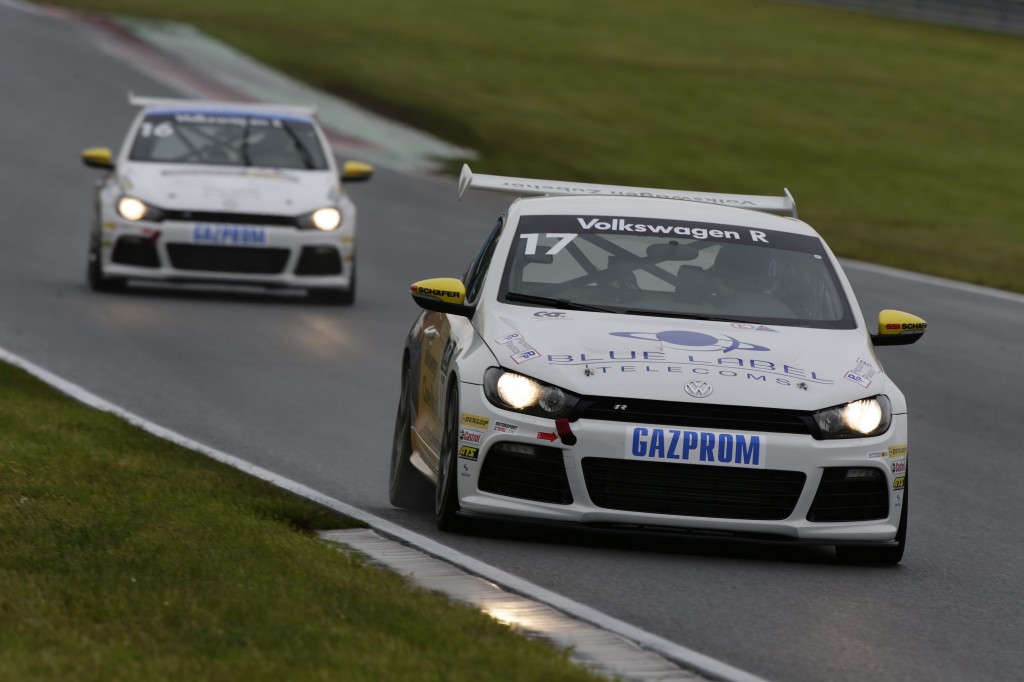 After his double victory at the opening weekend in Hockenheim, Pepper, who started from pole position, forced Germany’s Jason Kremer into second place after 14 laps and with a 3.5 second advantage. Kremer was delighted, he became the first “rookie” in this season of the environmentally friendly one-make cup to make it onto the podium. Sweden’s Victor Bouveng finished third, making it to the trophy presentation for the third time this season. Playmate Doreen Seidel also celebrated success at Volkswagen’s home race, making up five places to finish in position 17. 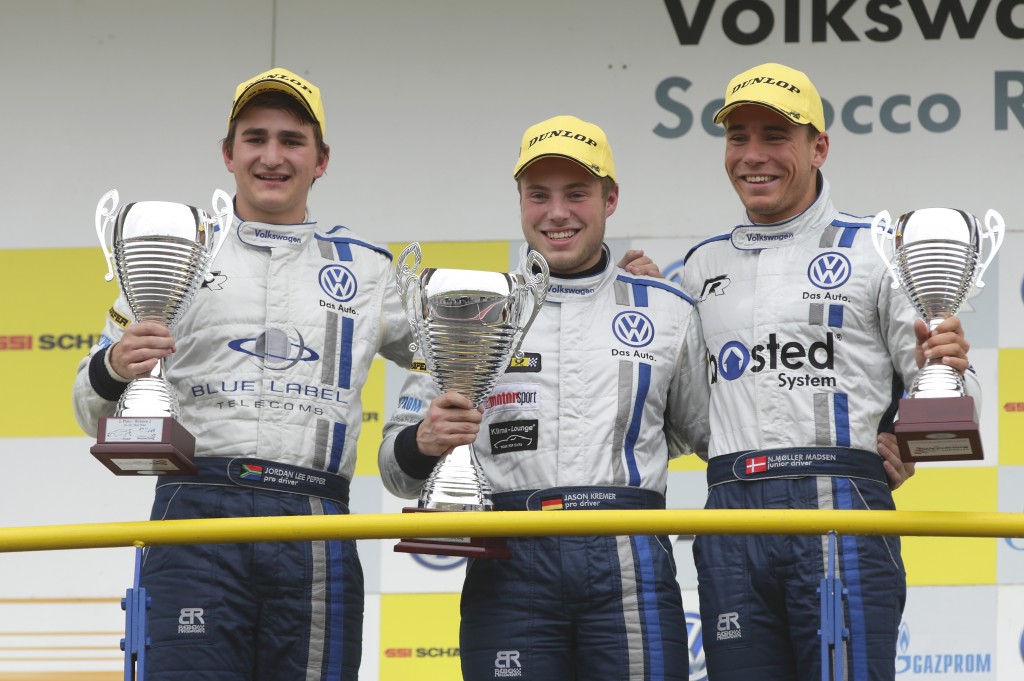 It was exciting at the top as Pepper and Bouveng did battle; the Swede initially took the lead after the start before the quick serial winner overtook him on the first lap. Jordan Lee Pepper went on to secure a comfortable victory. Since the Volkswagen Scirocco R-Cup began in 2010, only the two Poles Maciej Steinhof and Mateusz Lisowski have won the first two races of the season. However, they both only finished second in the third race of the year – Pepper on the other hand managed the hat-trick. He also leads the overall standings with the maximum possible number of 75 points, ahead of Bouveng (59).

After a fabulous manoeuvre on the final lap, the Swede was overtaken by Jason Kremer. There was also plenty of drama further down the field. Germany’s Andre Gies was awarded a drive-through penalty after barging violently into Sweden’s Mikaela Ahlin-Kottulinsky. Josh Caygill (GB) and Frederik Schandorff (DK) also came into unnecessary contact on the penultimate bend. Doreen Seidel benefited from this, overtaking both of them. Lucile Cypriano also showed a strong performance. The Frenchwoman, supported by FIA as part of “Women in Motorsports”, was on course to finish in the top ten, before she ended up on the grass on the twelfth lap and finished the race as the best of the four female drivers, in position 13. 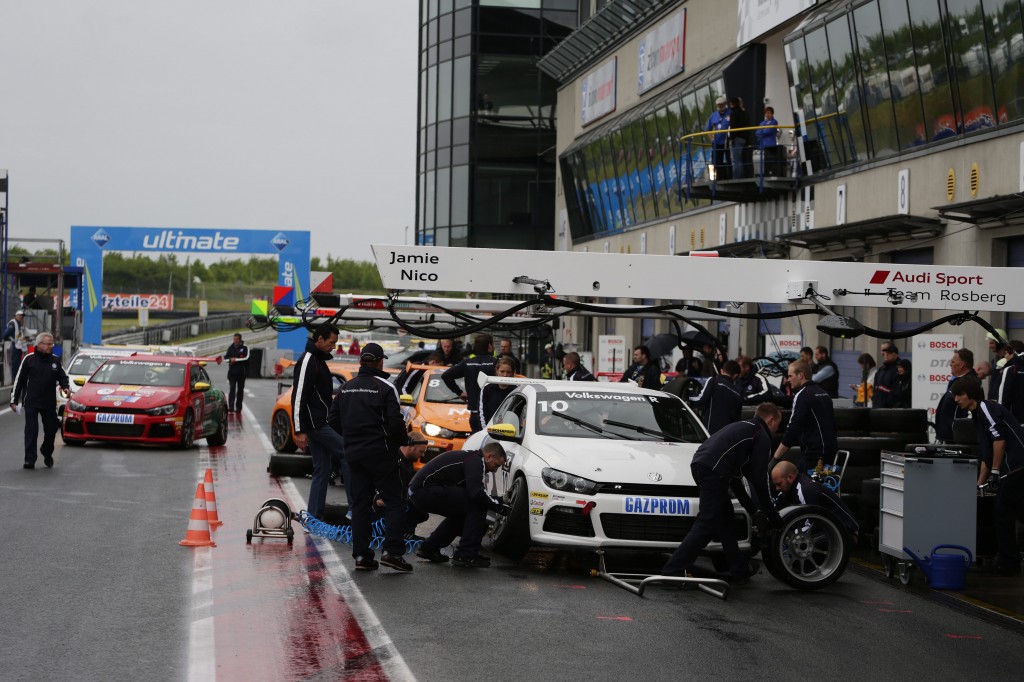 Jordan Lee Pepper will also start the second race of the race weekend in Oschersleben on Sunday at 11:00 am from pole position. Victor Bouveng and Jason Kremer will be the first to be hot on his heels. Lucile Cypriano in seventh and Mikaela Ahlin-Kottulinsky who will start from ninth on the grid both start the race with a good chance of doing well. This will also bring the ‘teething period’ to an end for the “rookies”: The full 50 points will be awarded to the winner for the first time this season.

Quotes from the third race of the season in Oschersleben

Manuel Reuter, DTM legend and mentor for Volkswagen Scirocco R-Cup: “The boys and girls put on a great race for the spectators. There were lots of good duels, most of them fair. The great battle between Victor Bouveng and Jason Kremer was exemplary. However, our rookies didn’t do quite as well when overtaking on the final lap. The commissioners classified it as a normal racing accident. It’s part of the learning curve, but Bouveng and Kremer were fairer and better in their fight for the podium.”

#17 Jordan Lee Pepper
Qualifying: 1 – Race 1: “Third race, third victory. What can I say: The season couldn’t have got off to a better start. Victor started strongly and after I was able to get one over on him here last year I wanted to do it again. Fortunately for me he made a mistake while braking shortly afterwards and I was able to pass him on the inside. After that I was sure that I could win.”

#16 Jason Kremer
Qualifying: 4 – Race 2: “After the Hockenheim weekend didn’t go too well, I am extremely happy with the race here. Moving up from fourth to second is a great result for me. On the final lap I was optimistic that I would overtake Victor because I had more push-to-pass left. I had a moment of panic when we touched slightly. But that’s part of touring car racing and I think the fans want to see it.”

#23 Victor Bouveng
Qualifying: 3 – Race 3: “I got off to a great start and Jordan was fair and left me enough space on the first bend. Unfortunately I braked too late coming out of the three left-hand bends and Jordan overtook me again. I wasn’t able to fend Jason off on the final lap as he had more push-to-pass than me. Overall I’m very happy: My third successive podium finish!”

#25 Doreen Seidel
Qualifying: 23 – Race 17: “I’m very pleased with my performance! I didn’t expect to make up five places. Some of my times in the race were better than in qualifying with new tyres. I need the feeling to fight for positions. After the start I initially kept an eye on the competition ahead of me. Then I knew what my strengths were and could make the most of the push-to-pass. I was fortunate with the accident on the final lap, but it also shows that you need to keep going right to the end.”

#10 Andre Gies
Qualifying: 15 – Race 23: “I wanted to keep Mikaela Ahlin-Kottulinsky behind me on the straights but then missed the braking point unfortunately – and then it was too late. It was a stupid mistake and I have apologized to Mikaela. I’m going to take a look at the incident again. It’s frustrating because I was doing really well up until this point.”