It was nothing less than Volkswagen’s greatest single victory in the history of the FIA World Rally Championship (WRC). In extremely difficult external conditions, Jari-Matti Latvala/Miikka Anttila (FIN/FIN) and Sébastien Ogier/Julien Ingrassia (F/F) celebrated a hard-fought one-two victory in the Polo R WRC at the Rally Argentina. Andreas Mikkelsen/Mikko Markkula (N/FIN) completed the German factory team’s triumph by claiming fourth place. Crowds of enthusiastic fans lined the route of SS 14, holding their breath as Latvala and Ogier repeatedly fought it out to win the fifth round of the season. Mikkelsen also helped to make the event a resounding success for Volkswagen by doggedly working his way up the leader board. Taking first and second place further extends Volkswagen’s lead in the Manufacturers’ Championship. Following the Rally Argentina, the three Volkswagen duos are now also at the top of the table in the Drivers’ and Co-Drivers’ Championship. The event marked Jari-Matti Latvala’s tenth win in the World Rally Championship and his third in Volkswagen’s colours. 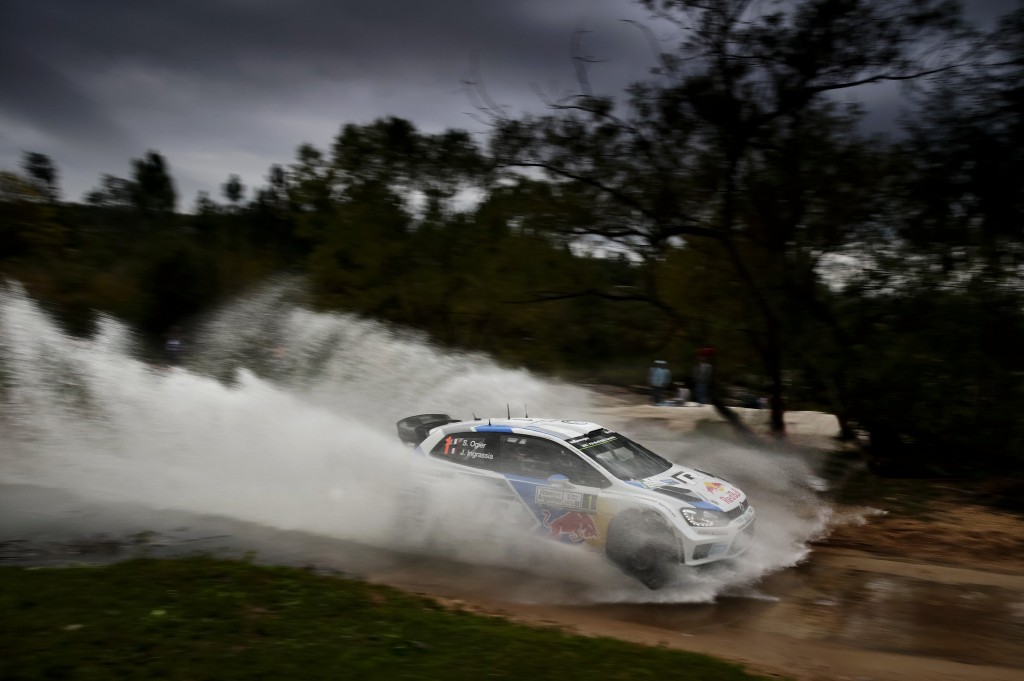 Latvala vs. Ogier, Ogier vs. Latvala – a duel to win the rally, a duel for the WRC crown

Right from the word go, spectators were treated to a thrilling duel for first place in Argentina – despite punishing external conditions. The current World Champions, Sébastien Ogier and Julien Ingrassia, got off to the better start, claiming the first two Special Stages. Then Jari-Matti Latvala and Miikka Anttila launched their counterattack during the rally’s longest stage. The pair took the overall lead by putting in the best time on the “Ascochinga–Agua de Oro” section, which is almost 52 kilometres long. Before the first day’s rallying had finished, first place changed hands twice more between Latvala and Ogier. Latvala dominated on Saturday and Sunday, gaining the upper hand in the duel with eight wins to Ogier’s one over the two days. Following five of the season’s 13 rallies, the battle between Ogier and Latvala is also dominating the battle for the WRC title. With his win, Latvala closed the gap in the World Championship standings to 24 points. 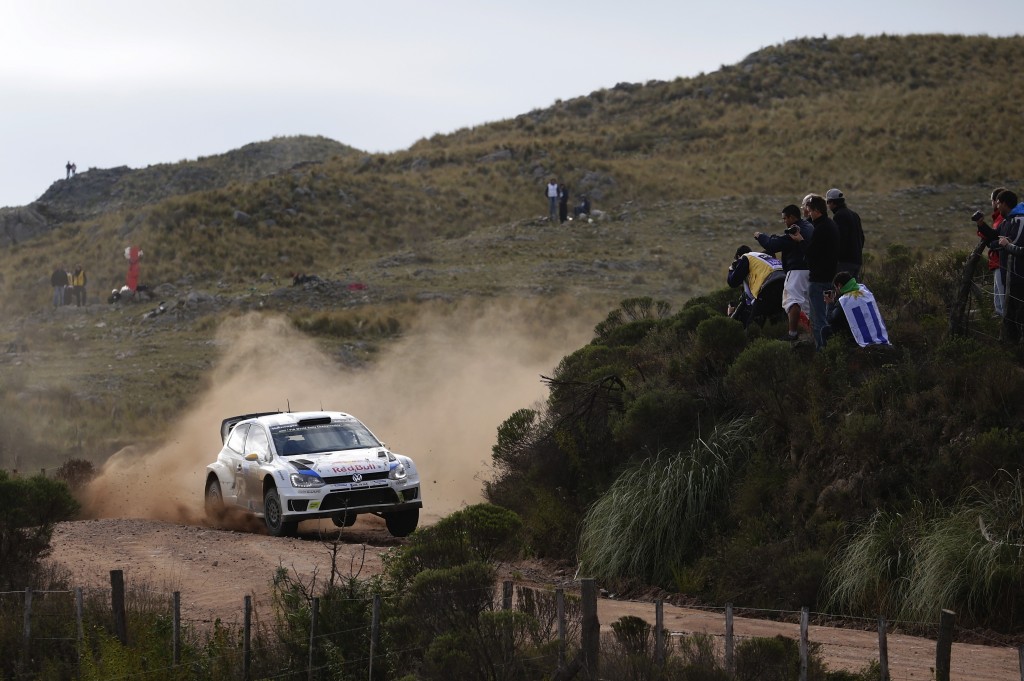 A setback and a fightback: Mikkelsen plays catch-up

The weekend’s most impressive fightback came from Andreas Mikkelsen/Mikko Markkula. The Norwegian–Finnish Volkswagen duo suffered a setback on the very first day of the Rally Argentina when a belt flew off their alternator – sheer bad luck. They finished seventh rather than third and were hit by a five-minute penalty instead of vying for the lead. However, Mikkelsen/Markkula didn’t give up. On Saturday, they overtook three of their rivals by setting the best time on one stage and bagging two other top three times. This halved the gap to second place to less than two minutes. A conservative but successful strategy came into play on Sunday: Mikkelsen/Markkula cleverly secured fourth place with good results on the two classic stages “Mina Clavero” and “El Condor” and managed to finish just 23.6 seconds shy of a podium place rather than their original 3:21.3 minutes. It is interesting to note that Mikkelsen/Markkula would easily have secured a spot on the podium with their performance alone, had it not been for the time penalty. 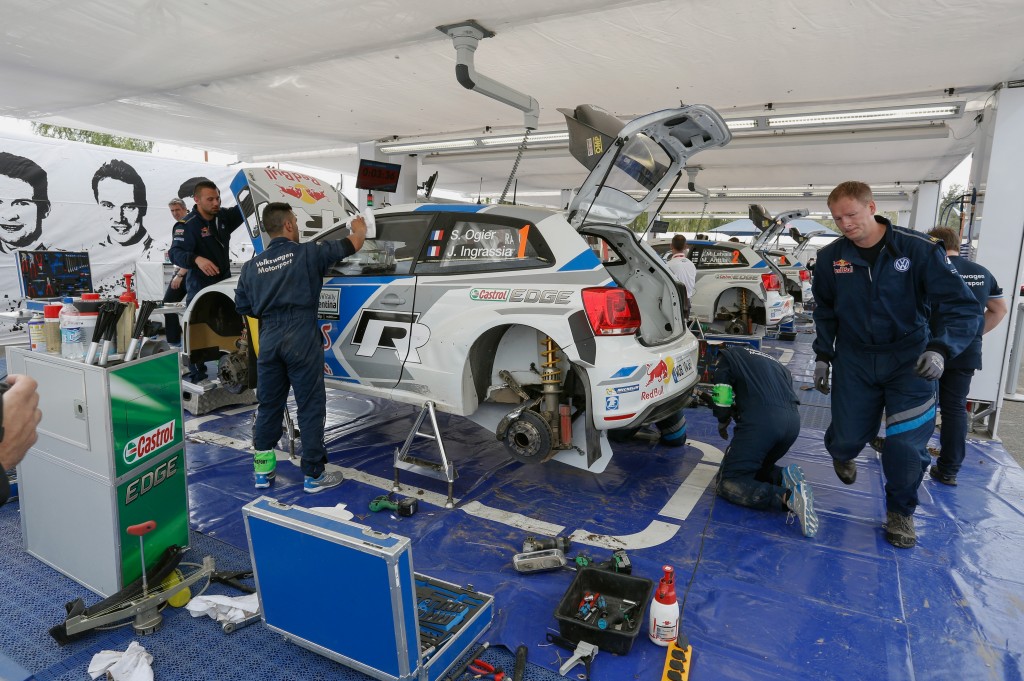 The backbone of the team: Volkswagen’s service mechanics are the key to success

The Rally Argentina is not just a WRC classic – it also has a reputation for being the toughest test of both man and machine. In 2014, heavy rain and storms in the weeks leading up to the event meant the tracks were badly eroded and very rough. Countless cross-ditches and deep potholes put all of the teams’ World Rally Cars to the test. However, the Volkswagen drivers’ equipment remained in great shape throughout the competition, thanks to the team’s service crews. Volkswagen’s experienced mechanics used the three services on each day of the rally – one in the morning (15 minutes), one at lunchtime (30 minutes) and one in the evening (45 minutes) – to make sure the three Polo R WRCs were always ready to face the forthcoming stages. 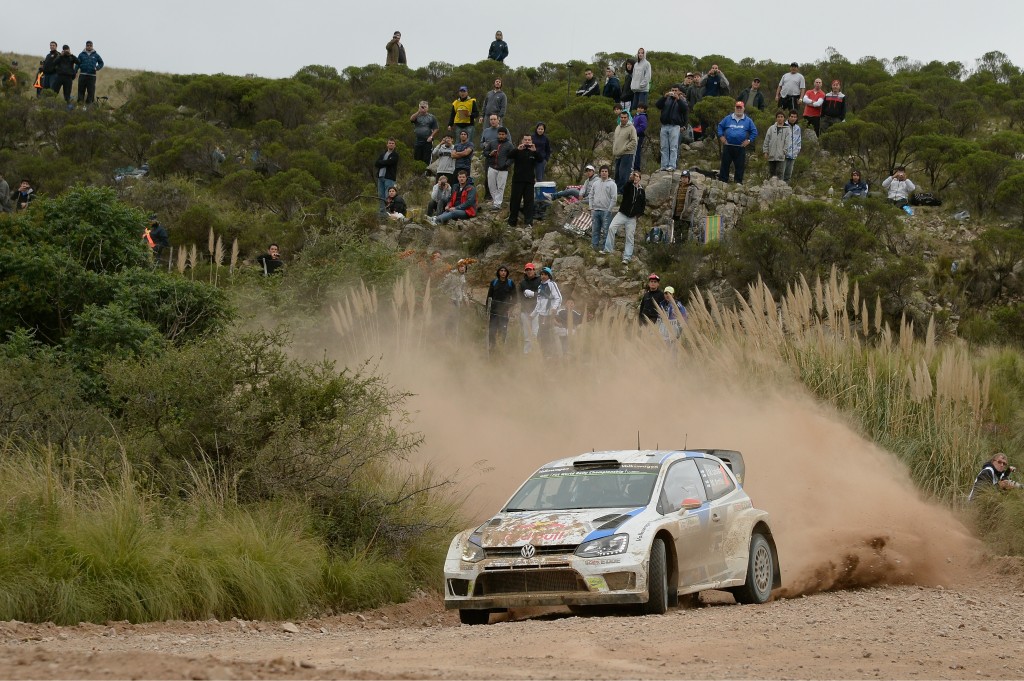 By claiming first, second and fourth place in Argentina, Volkswagen celebrated its greatest success to date in a single round of the WRC. This win thereby replaces the team’s previous milestone at the Rally Great Britain in November 2013, when the three Volkswagen pairings secured first, second and fifth place. As well as claiming impressive positions, the team did it in style. The Rally Argentina is made up of 14 Special Stages covering a total of 405.10 kilometres. Ogier, Latvala and Mikkelsen set the best time on ten of them, finished second eleven times, and took third place on ten stages. This meant that Volkswagen claimed 31 of the 42 possible top three times. With this performance, Argentina remains the most successful motorsport host country for Volkswagen. In 2005, Volkswagen bagged its first overall victory for the Volkswagen Race Touareg at the Rallye por las Pampas. Then in 2009, 2010 and 2011, the make celebrated three marathon wins at the legendary Dakar Rally with Giniel de Villiers, Carlos Sainz and Nasser Al-Attiyah at the wheel.

Jari-Matti Latvala’s victory at the Rally Argentina in 2014 also saw the team continue a winning streak in the FIA World Rally Championship (WRC) which started last season: Volkswagen has now taken the top spot nine times in a row. The marque finished the 2013 season with wins in Australia, France, Spain and the UK. It has followed this with success in Monte Carlo, Sweden, Mexico, Portugal and Argentina so far in 2014. This means that Volkswagen remains unbeaten to date in 2014 and is celebrating its third double victory in the space of five rallies and its fifth overall.

The icing on the cake: extra points for Ogier and Latvala in the Power Stage

Once again, Sébastien Ogier was all over the final Power Stage, when extra points are awarded for the three best pairings in the Drivers’ and Co-Drivers’ Championship. On the second run-through of “El Condor”, the ruling World Champion finished 10.5 seconds ahead of Mikko Hirvonen (Ford) and another tenth of a second in front of his fellow Volkswagen driver Jari-Matti Latvala. Four of the six extra points went to the Wolfsburg-based team as a result. Volkswagen’s drivers and co-drivers have now bagged extra points 27 times already in the course of 18 rallies.

First, second and third – the Volkswagen duos have a firm grip on the top of the WRC drivers’ and co-drivers’ leader board. Sébastien Ogier/Julien Ingrassia are in the lead with 112 points, followed by Jari-Matti Latvala/Miikka Anttila who have notched up 88 points. Having finished the latest rally fourth, Andreas Mikkelsen/Mikko Markkula are now in third place overall with 48 points. Mads Østberg/Jonas Andersson (Citroën) are fourth in the overall standings with the same number of points as Mikkelsen. Volkswagen has further extended its lead in the Manufacturers’ Championship thanks to Ogier and Latvala’s one-two win, giving them the maximum point score of 43. The works team will go into the next round in Italy (05–08 June) 97 points ahead of second-placed Citroën.

Quotes after day three of the Rally Argentina

Sébastien Ogier, Volkswagen Polo R WRC #1
“The conditions at this Rally Argentina were the most difficult ones I’ve experienced for a long time. The road conditions were incredibly tough on the drivers and the cars, so I’m very happy with second place. I’d like to congratulate Jari-Matti, who put in a strong performance and deserved to win. I’m actually pleased that people are realising it’s not as easy to win as it might sometimes look. Julien and I gave our all throughout the weekend, but especially at the end the gravel tracks were so slippery and muddy that our only objective was to make it across the line. Mastering ‘El Condor’ in particular was a real adventure. Nevertheless, it’s always overwhelming to tackle the stage in front of so many frenetic fans. I’m looking forward to next year, when I’ll have another go at making it to the top of the podium in Argentina.”

Jari-Matti Latvala, Volkswagen Polo R WRC #2
“Of course I’m absolutely thrilled to have won the Rally Argentina. It’s been quite a few years since a Finn won this rally. Fighting it out with Sébastien Ogier and Julien Ingrassia was great. My co-driver Miikka Anttila contributed enormously to our success because his instructions safely guided us through some extremely difficult sections. We have done of lot of analysing and working on ourselves over the last few weeks and months, and it paid off here. Huge thanks go to the whole Volkswagen team too, because our Polo was always perfectly prepared and withstood the immense strain right until the end. This victory means a lot to me personally because we won this tricky rally on our own merit, which shows that we’re still a force to be reckoned with in the World Championship.”

Andreas Mikkelsen, Volkswagen Polo R WRC #9
“I’ve never been so delighted to finish fourth. After we failed to finish the last stage on Friday because of a technical glitch and were hit with a five-minute penalty as a result, we tried to make the best of things. We simply couldn’t have done any more and I’m really pleased with our performance. After gaining fourth place even quicker than we’d hoped on Saturday, we were a bit more cautious on Sunday. Lots of mud, thick fog – the last Special Stages were a real challenge. Nevertheless, we managed to make good a lot of time and shorten our gap to third place. All in all, we’re very satisfied.”

Jost Capito, Volkswagen Motorsport Director
“Simply outstanding. We had set ourselves ambitious targets for this rally, but in the end we exceeded our own expectations by far. Finishing first, second and fourth is Volkswagen’s biggest success at a WRC rally to date. It might look like it was easy when you see the results, but it was hard work. Every single driver and co-driver did a fantastic job and all of them could rely on their Polo R WRCs leaving the service area in top shape every time. I’m particularly pleased about Jari-Matti Latvala’s win. It took great mental strength for him to wrestle this win away from Sébastien Ogier, who’s the reigning World Champion with good reason. He put in a fantastic performance as well. And we’ve signed a great up-and-coming driver too in the shape of Andreas Mikkelsen. We’ve known that for a long time, but he proved it to everyone at this event with the best gravel rally of his career.”