Twenty years ago, the then soon-to-be-launched McLaren F1 GTR began testing ahead of an assault on the 1995 GT season. The track derivative, as the road-going version had done, rewrote the rule book and the claimed victories and titles across the globe in the years that followed, securing a place in motorsport folklore. Two decades on, and the covers have been pulled off the dramatic and purposeful McLaren P1™ GTR design concept during a private event at the Pebble Beach Concours d’Elegance event in California. The aggressive racing concept is a preview to the final model which, with a little under a year until production commences, has now entered the next phase as the development team works to hone and further optimise the ultimate track-focused racer. 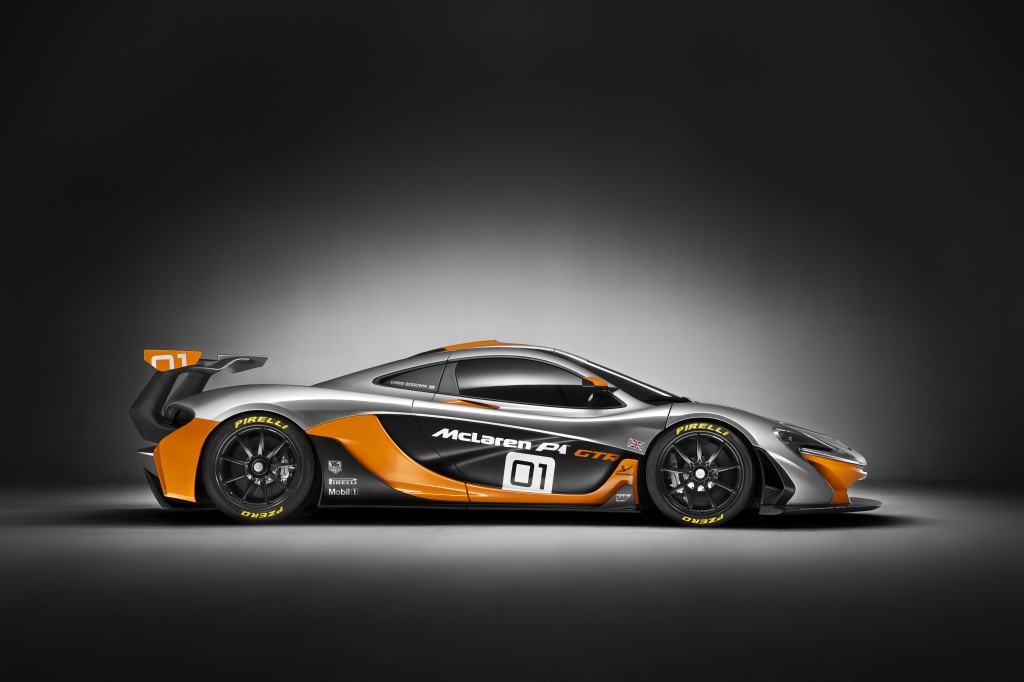 With no need to meet the legislations for road legality, the McLaren P1™ GTR will be the most track-tailored and most powerful model produced by McLaren Special Operations to date, with a clear target even more focused than its road-going sibling: to be the best driver’s car in the world on track. With even greater emphasis on aerodynamic performance through the dramatic bodywork, the McLaren P1™ GTR will also feature race-proven slick tyres, a fixed ride height, enhanced power delivery from the IPAS powertrain and Formula 1™-derived DRS from the large, fixed rear wing and an ERS-style push-to-pass system, all combining to offer the ultimate track experience. 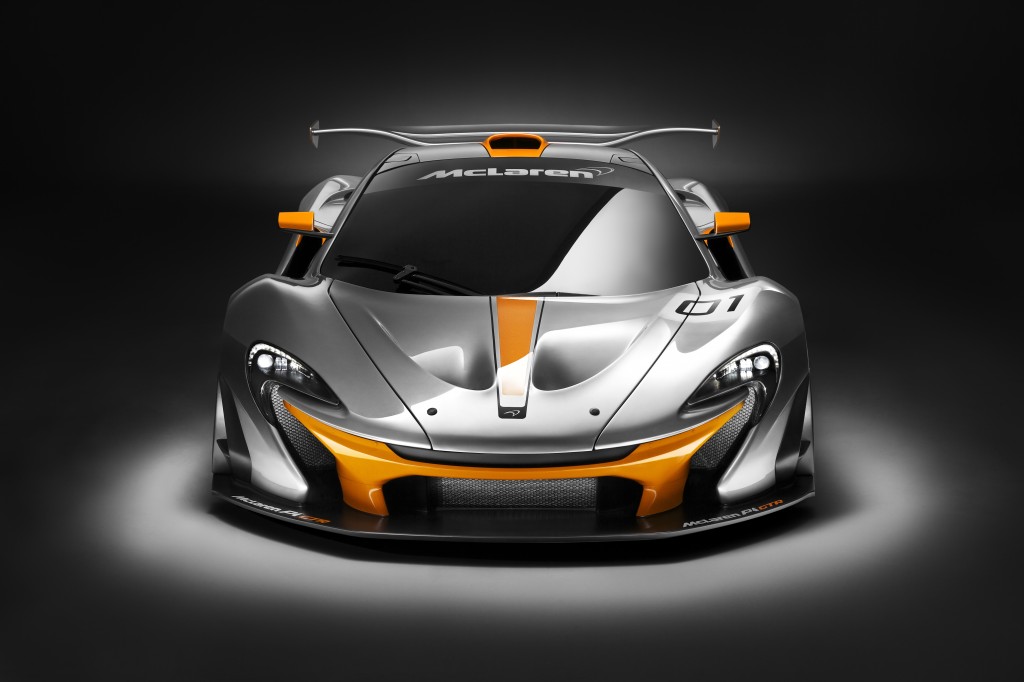 Based on the McLaren P1™ road car, the track-focused McLaren P1™ GTR design concept further optimises the aerodynamically efficient ‘shrink-wrapped’ body shape in order to offer maximum performance, superior handling characteristics and optimised driver engagement on track. A host of changes have been made, and the car has been thoroughly re-engineered from the ground up to ensure the McLaren P1™ GTR achieves its target of being the ultimate drivers’ car on track.

The front track of the McLaren P1™ GTR design concept has been increased by 80mm and is coupled with a more aggressive GT-style front splitter. Reprofiled low temperature radiator ducts seamlessly flow into the leading edge of the aggressively flared front wheelarches, while the active aerodynamic flaps are retained from the McLaren P1™ in the floor ahead of the front wheels. 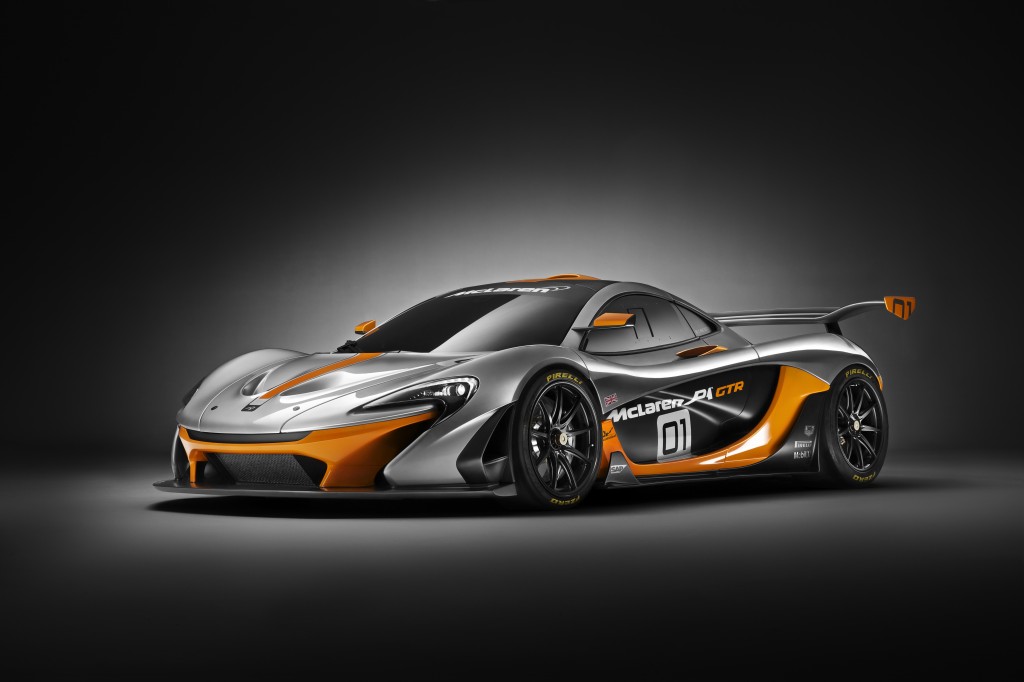 The bodywork is ‘shrink-wrapped’ around the carbon fibre MonoCage chassis behind the front wheels, and is designed to channel the air from around the wheel well. An additional aerodynamic blade is located behind the wheelarch to clean the air from the front tyres. This aero device flows seamlessly along the bottom edge of the dihedral doors, along the flank of the carbon fibre bodywork, to an additional side panel at the rear which ducts additional air into the high temperature radiator and improves the aerodynamic performance of the rear floor.

The profile of the McLaren P1™ GTR design concept remains as dramatic as ever, hunkered down on to the race-prepared suspension with a fixed ride height, lower than the standard car. The snorkel air intake, inspired by the design of the original McLaren F1, is still present within the roof structure of the carbon fibre MonoCage chassis. The wing mirrors have been repositioned to the A pillars, to put them closer to the eye line of the driver and reduce aerodynamic drag, while the trailing edge of the door-mounted radiator channels have been extended to draw more air down through the cavity within the door, and into the engine to aid cooling.

A set of lightweight 19-inch motorsport alloy wheels are fitted – 10.5-inches wide at the front, 13-inches at the rear – and are secured into place with quick-release centre locking nuts. Tyre changes are made easier through an onboard air jacking system, similar to that seen on the McLaren 650S GT3 racer. 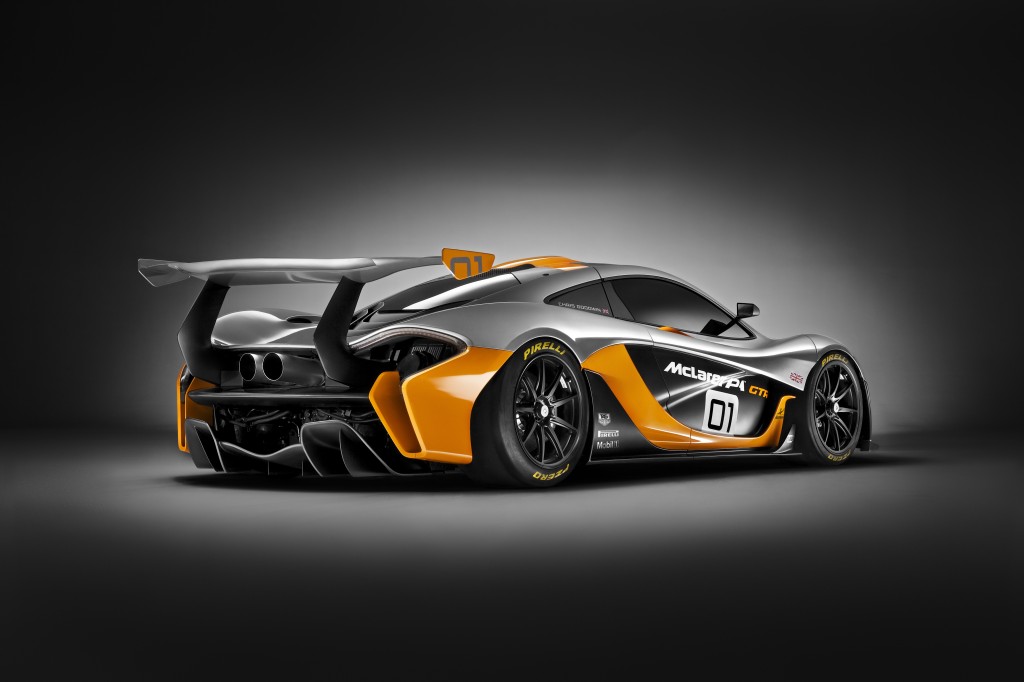 At the rear, a large, twin-element wing is mounted on dramatic carbon fibre pylons which extend around the rear of the bodywork. This fixed height wing is fitted with a hydraulically operated Drag Reduction System (DRS) to boost acceleration performance, and has been honed to provide increased levels of downforce compared to the road car, working with the active aerodynamic flaps located ahead of the front wheels. The active aerodynamic devices optimise aerodynamic balance through all phases of cornering. The bodywork of the car has been reprofiled to improve aerodynamic efficiency below the large rear wing, and incorporates a quick-release system without affecting the rear wing. The road legal McLaren P1™ stows the rear wing within the bodywork, but with the fixed height wing, and therefore no pistons or moving mechanical parts, the bodywork of the McLaren P1™ GTR design concept behind the engine bay is now a smooth, flowing surface, feeding clean air below the wing and over the back of the car.

Below the rear wing sits the exposed, centrally mounted exhaust, which is an all new design, developed exclusively for the McLaren P1™ GTR. Made from inconel and titanium alloy, the system maximises the aural characteristic of the higher output 3.8-litre twin turbo V8 engine to maintain, and further emphasise, the McLaren sound. The design of the exhaust has also changed, with a straight cut twin pipe setup now used in place of the single exit exhaust. 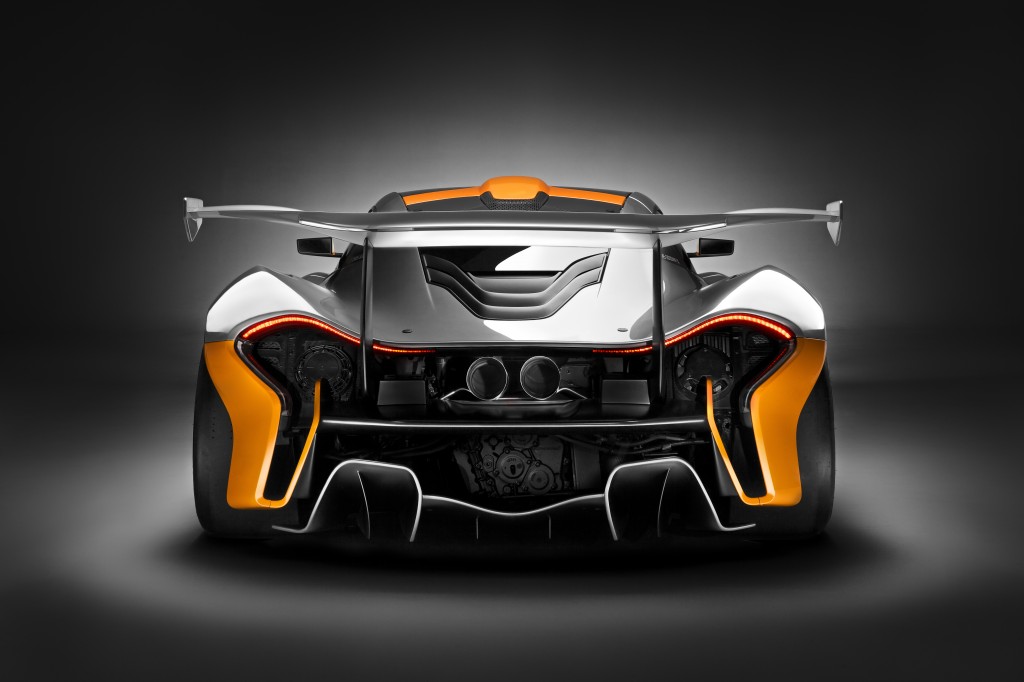 Airflow is managed carefully across the whole car and channelled in the most efficient and effective ways possible. This includes the air below the car, and a large carbon fibre diffuser dominates the lower half of the rear of the car. This is designed to work in tandem with the rear wing to enhance rear downforce and grip levels. The McLaren P1™ GTR design concept runs on the bespoke slick tyres designed by technical partners Pirelli in collaboration with McLaren, designed to offer a greater level of grip, cornering agility and handling balance. These characteristics enable much later braking into corners, higher apex speeds, and the earlier application of the throttle on the exit of corners, which lead to improved lap times.

Modern interpretation is more than just a family resemblance

The design concept unveiled at Pebble Beach wears a livery which harks back to the original McLaren to wear the GTR badge. During the rigorous testing programme for the F1 GTR, the test car, chassis #01R, originally wore a distinctive orange and silver livery. This colour scheme has been reinterpreted for the model, with the number, 01, signifying the original chassis number. That car eventually went on to take the coveted win at the 1995 24 Hours of Le Mans.