I’m surprised there hasn’t been more accidents at the Nurburgring like the eight car pile up over the weekend. Nothing has changed about the track or its physical safety but the number of public lapping sessions have been significantly cut back since the new management took over. With the Nurburgring becoming more and more popular, the limited public sessions are jammed with cars waiting to blow 20 euro for a lap. 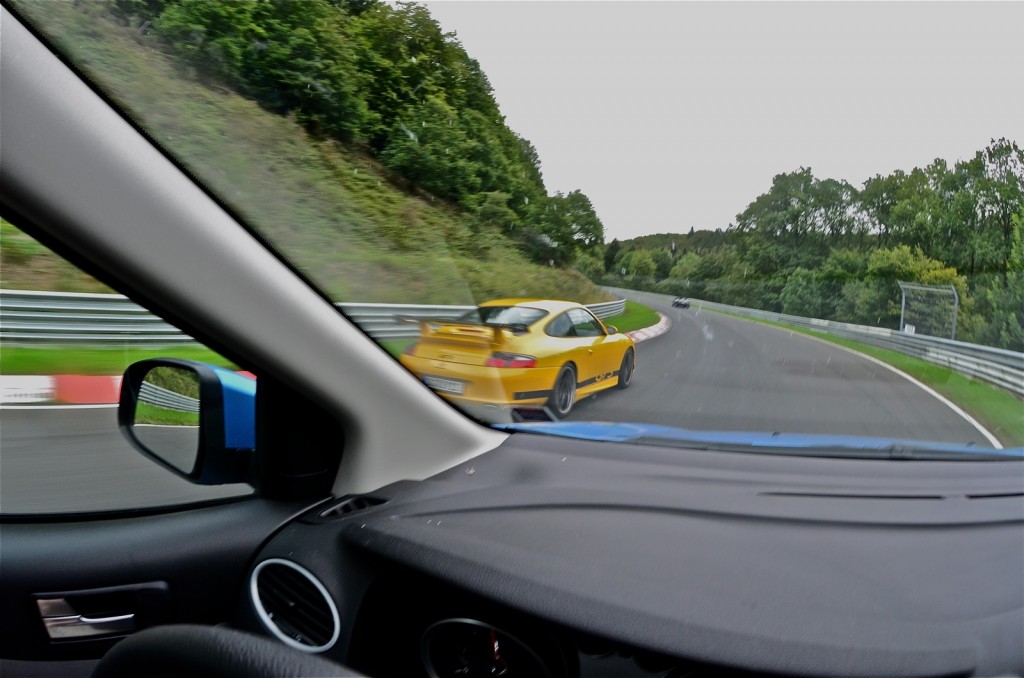 I waited in line for nearly 20 minutes just to get thru the tollbooth which was launching cars every couple of seconds. It was madness. And the differential in speed is absurd because any street legal vehicle can turn a lap. I personally had one of the slowest cars on track. I knew this would be the case and thought I would try a Ford Transit like the Sabine Schmitz Top Gear episode but it was like $1,800 for a week, so I settled for a previous generation Ford Focus Estate. The Estate part is euro speak for station wagon. At least it ran on gas and I could hear the engine. When I was here last, I drove a little French, diesel hatch that was horrible, but it was two summers ago before the management changes and the track was empty.  Sure it was raining harder than I’ve ever seen while on a race track, but I was still the only car that lined up for that session. I had the track to myself.

But now, just two summers later, the track is jammed, even on a rainy day. Here is my lap in the wet where I get run over by Porsche after Porsche after BMW.  My little Focus was no match for the real machinery that people bring to the Ring. So I went out and had fun while listening to some bad euro music and worked on learning the track some more. I could have stayed more on the racing line and forced the other cars to work harder to pass, but their closing speed was so high it seemed like madness to not give them a little extra room to slip by me.

While I play the Nurburgring in Forza on my Xbox, it’s just not the same thing as being there. But at least in the game there are only a few cars out there, not the hoards of track junkies. But that’s not the real issue. The problem is that anyone is welcome to go out on track in any street legal car. If my mom wanted to rent a twin turbo Porsche for her very first lapping session, they would let her take it out. So what you end up with is a ton of fast cars with massive variation in speed, but more critically, skill level and there’s no way of knowing who’s in what car or whether they have any idea how to drive the Ring.

Technically it’s a public road and slower cars are to stay right, with all passing on the left. Turn signals are used to signal changes of intention from the right lane to the passing lane and so on. But throw in a handful of GT3’s, a few M3’s and Corvette or two for good measure, and mix in a caution area, and all rules are off. You might as well be in the 24hr. I know if was driving a real machine there would be flat out moments trying to pass the guy ahead of me, it just happens on a racetrack.  Wouldn’t you? But I don’t think that’s the problem. It’s a racetrack and one of the most punishing ones in the world yet we all line up as many times as possible for a few laps. Just give us more track time at the Ring and the cars won’t be so bunched up into these limited sessions. Some yellow lights around the track would be nice, but I would be down with a little radio controlled light you put on your dash that can signal a caution zone approaching. Just take a deposit at the time of issuing the ring card.  But the problem is that the Nurburgring is so good, so amazing, that we would all keep lining up no matter how dangerous it gets.  I know I would.