Formula Drift takes to the streets of Long Beach this Friday for the start of its 11th season. With race organizers committed to returning the sport to its showy roots and a host of top talent in the offing, the 2014 season promises another year of exciting sideways competition.

The action has already begun. A media demonstration day Tuesday saw drivers Dean Kearney and Ryan Tuerck both hit the wall hard in a pair of unrelated crashes. 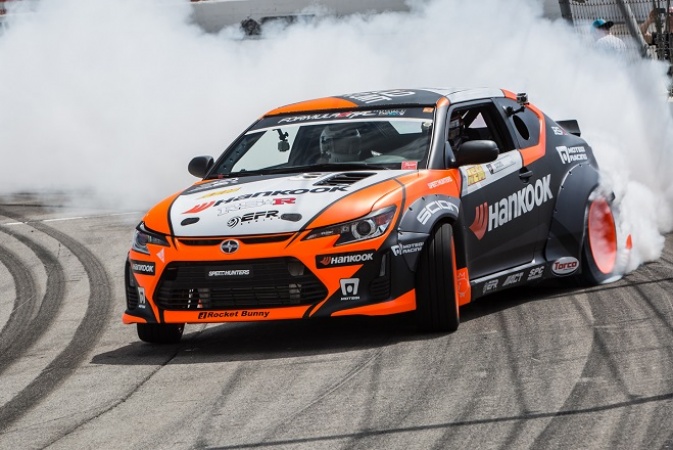 “It’s an unforgiving track. It’s really slippy and once you get into the marbles, there’s no recovery from that,” says driver Fredric Aasbo, who kept his Hankook Tire Scion Racing tC (pictured, ABOVE) out of trouble Tuesday. “It’s a balancing act. You want to be able to find the limit, but that track bites your a** – if it goes wrong it’s like a game of pinball, bouncing off the walls.”

The motorsport calls for full commitment from competitors. Judges award points to drivers for smoky, sideways drifts based on criteria of speed, angle and style. While it is relegated to alternative status by racing purists, there is no arguing the high degree of car control required to deliberately hurl a sideways car into a corner and keep it pinned at 90mph, inches from an opponent’s door.

“It is a race. It’s not timed, per se, but leaving the other guy in the dust – or in the smoke – is still what matters most,” says Aasbo.

And while both Kearney and Tuerck are expected to return to competition this weekend, it can be tough to bounce back from a tangle with the Long Beach course – especially given the power the cars are producing this year. This season is seeing a continuation of the incremental trend toward ever-increasing horsepower, facilitated by the series’ open rulebook, which encourages development and innovation.

“It’s one of the great aspects of drifting is that it allows unlimited power and drivetrain modifications,” said Chris Forsberg, 2009 Formula Drift champion, who is a player in the high-horsepower game this season. “It’s cool to be able to brag and say we’re pushing the envelope with some of the fastest, most powerful cars on the planet.”

Forsberg’s Hankook Tire Nissan 370Z is producing nearly 1,000 horsepower from a Nissan Titan V8 engine – one that this year is boosted with nitrous that he says will help him access the power over a wide, useable range.

“There’s going to be a lot of cars that are over 1,000 horsepower,” says Michael Essa, a privateer driver who piloted his Essa Autosport/Yokohama Tire BMW (a 2005 E46 M3) to championship victory last year. He’ll be on the lower range of the power war – producing some 750 at the wheels. But he is banking on dependability, which he notes is a cornerstone for any motorsport build: “You have to have enough power to be able to compete but at the same time, if you have too much power you use a lot of reliability. 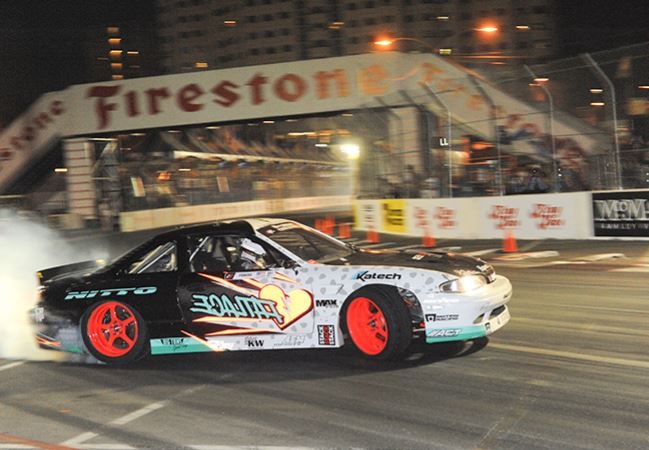 The course this weekend returns to its traditional three turns of the Toyota Grand Prix of Long Beach street course: Turns 9, 10 and 11 in the eastern end of the race circuit. It is a popular start to the season; an annual sell-out and fans will pack standing-room-only into the venue this weekend.

It is tough to pick a favorite at the start of the season, as defending champion Essa’s own 2014 story illustrates:

“Coming out of the season before last, everyone thought I was maybe a top-10 contender and coming through and winning a couple of rounds and finishing at the top of the podium for the season… Nobody was expecting that — I wasn’t expecting that. But with drifting it’s still a new enough sport that it’s possible for a privateer to win.”

“There are guys in the series who have pure raw talent and, even though they might be in a privateer program, they’re very capable of winning a championship,” he notes.

Organizers have tinkered with the rulebook in 2014, with the aim of increasing excitement in the competition. The series has narrowed the range of points available in an effort to reduce the potential for one bad weekend in an otherwise stellar seven-stop season to dash a driver’s championship hopes. It’s a change that would have benefited another favorite for 2014, Daigo Saito, who finished the season in third place last year despite three wins in seven rounds.

Judges are also freed this season from having to award penalties based on specific objective criteria in last year’s rulebook that many thought were too restrictive. Fans were left baffled after several contests last season when the driver who put on what was clearly the best show in a head-to-head round was eliminated on a technicality.

“For some drivers, it made them more tentative in certain situations and we’ve repealed that,” explained Sage. “The system this year encourages drivers to show their own personal flair.”

Perhaps more controversial is Formula Drift’s decision to eliminate the third-place knockout round. Typically one of the most exciting battles of the weekend, drivers held nothing back in their attempts to earn the final spot on the podium.

Although the action was exciting, Sage said organizers made the decision for the fans. Too often, the third-place round often ran long as judges determined the competition too close to call and repeatedly called the drivers back to try again. Television schedules suffered and fans wore out. Third place will now go to the highest-qualifying driver who achieves the bracket.

“Our closest cousin, NHRA, doesn’t run (a third-place round) either,” said Sage. “We thought we would do away with it for one year and evaluate.”

In a championship round, drivers qualify for one of 32 spots on the grid, then work their way through a series of head-to-head knock-out elimination tandem runs to the winner-take-all first-place battle. Qualifying for this weekend’s main event takes place on Friday (gates open at 11 a.m.), with gates opening for the main event on Saturday at 10 a.m. The top rounds of competition get started with the official opening ceremonies Saturday at 3 p.m.

The following weekend, during the Toyota Grand Prix of Long Beach, the drifting action returns to the streets of Long Beach with the Motegi Racing Super Drift Challenge (pictured, ABOVE). The demonstration event is open to all weekend ticket-holders and takes place under the lights Friday and Saturday nights (April 11 and 12), with the action starting at 7 p.m.