Renault, a pioneer in the world of electric vehicles and an active participant in motorsport ever since the brand was founded, was named last year as an official technical partner of the FIA Formula E Championship. With the championship’s inaugural race in Beijing in September, looming fast, the French carmaker has announced that is to step up its involvement in the new series in the form of backing for e.dams. 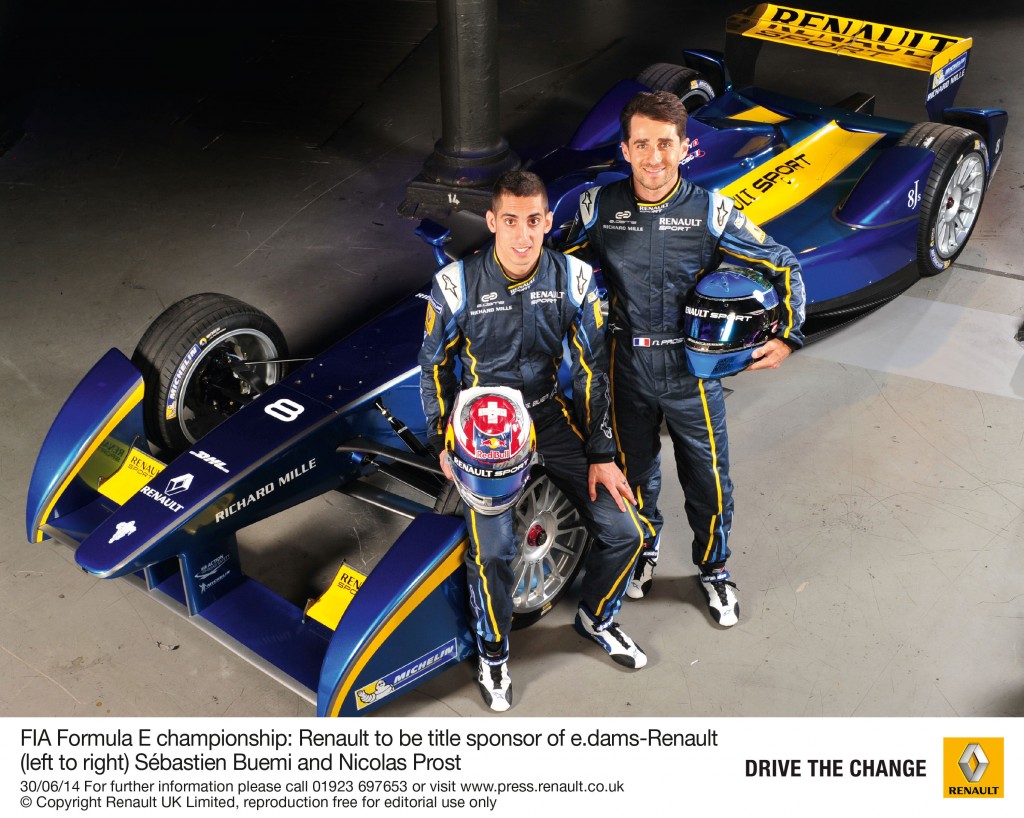 Renault will be the Title Sponsor of the team which is co-owned by Jean-Paul Driot and four-time Formula 1 world champion Alain Prost, who is also an ambassador for the Renault brand. This involvement with the French team will allow Renault to maximise the coverage of its participation in the new championship which promises to be particularly attractive. It’s the start of a whole new discipline and motorsport fans will be treated to great show with a new format that will take the action into the heart of several major cities.

The brand’s name will appear on the cars, as well as on the drivers’ race suits and helmets. A pro-active communication programme is also planned for the championship’s inaugural season.

Patrice Ratti, President of Renault Sport Technologies, underlines that “This partnership with e.dams-Renault will allow Renaultsport to have an even closer involvement with the Formula E Championship. The series will be unique and takes motorsport into a new age. Renault is proud to be playing a part in the adventure which stands out as a new challenge. We know Alain and Jean-Paul very well and their experience and record make them high-quality partners. Our involvement with e.dams-Renault will play a core role in our participation and in our Formula E development work.

“We are also very pleased with the work achieved in association with Spark on the Spark-Renault car which all the teams will use during the first year of the series, and we will obviously continue to help Spark to provide the best possible technical service to all the participating teams.”

Alain Prost, co-owner of e.dams-Renault and ambassador for the Renault brand, adds: “Jean-Paul Driot and I are delighted to be associated with Renault in this new adventure. The choice of Renault as a major partner was a perfectly natural step because of the exceptional record it has carved out in motorsport, as well as its unique expertise in the field of electric vehicles. Personally, I am thrilled by the idea of working with Renault on such an ambitious project again and by the prospect of writing a new chapter of our association.

“I am confident that our venture will be successful. We are actively preparing for the first races of the season. This week’s test at Donington is the next step in that process and it will be followed by a busy summer in order to be ready and competitive for the first grand prix in Beijing, on 13th September.

“It’s an enormous challenge because this championship is completely new, both in terms of the technology it features and also the race formats. These are very exciting times.”

Jean-Paul Driot, CEO of Dams and co-owner of e.dams-Renault: “Renault is naturally the ideal partner for our involvement in this brand new competition and we will be able to pool our respective expertise. Dams has carved out an exceptional record since it was formed 26 ago and it will now be able to benefit from the input of a partner that has proved itself in the worlds of both motorsport and electric vehicles. Our association will permit us to optimise the development of our racing cars. It is worth recalling that Dams is active in the World Series By Renault and the creation of e.dams-Renault opens up a new chapter of our history. We have recruited two very talented drivers for this exciting new challenge. In addition to his driving skills, Nicolas Prost will bring his ability to think outside of the box to the table, as well as his technical background and his ability to analyse the technical aspects of this all-electric formula. Sébastien Buemi will bring his reputation and speed, along with the fact that he is extremely popular with the public and motor racing fans.”

The e.dams-Renault team has announced that its drivers will be Nicolas Prost and Sébastien Buemi, two well-known names from the worlds of Formula 1 and endurance racing. They will have the privilege of driving the new 100% electric cars that will race in the centre of some of the planet’s finest cities, starting on 13thSeptember.

Nicolas Prost was born on August 18, 1981, in Saint-Chamond, France, and made his racing debut in the 2003 Formula Campus championship. He moved up to Formula Renault 2.0 and 3.5 before trying his hand in Spanish Formula 3 and the Euroseries 3000. Since 2009, he has shared his time between endurance racing (Le Mans Series, Le Mans 24 Hours) and the Trophée Andros ice-racing series. In 2013, he was named test driver for Lotus F1 Team.

Sébastien Olivier Buemi was born in Aigle, in Switzerland’s Vaud region, on October 31, 1988. He made his Formula 1 debut in 2009 with Toro Rosso. The two points he collected in the 2009 Australian Grand Prix made him the fourth-youngest driver to score points in the Formula 1 World Championship.

DAMS was founded in 1988 by Jean-Paul Driot. The team is based in Ruaudin, France, close to the Circuit de La Sarthe, home of the Le Mans 24 Hours. DAMS grooms young drivers for careers in Formula 1 and, to date, 27 of them have gone on to compete in motorsport’s premier series.

DAMS is involved in Formula 1 feeder single-seater championships such as the GP2 Series and World Series by Renault. Over a period of 25 years, the team has built up sound experience and an outstanding record, including three F3000 titles, a Formula Renault V6 title, two A1GP World Championship titles, two GP2 Series Drivers’ crowns with Romain Grosjean and Davide Valsecchi, and Teams’ and Divers’ titles in Formula Renault 3.5 with Kevin Magnussen. DAMS also has solid experience of endurance racing with eight previous participations in the Le Mans 24 Hours, notably in association with Panoz and Cadillac. DAMS is today acclaimed as one of Europe’s most prestigious race teams.

With a history that dates back to 1898, the international Renault Group sold 2.6 million vehicles in 128 countries in 2013. Today, it employs a total staff of 121,800 and has 37 factories. To meet the important challenges of the future and pursue its strategy of profitable growth, the group is focusing on its international expansion, the complementarity of its three brands (Renault, Dacia and Renault Samsung Motors), electric vehicles and its alliance with Nissan, as well as its associations with AVTOVAZ and Daimler. With a score of 12 Formula 1 world titles to its name over a period of 36 years, Renault views world motorsport’s most exacting discipline as a means to promote innovation, its image and brand awareness.