Volkswagen has reached another milestone in the FIA World Rally Championship (WRC): Sébastien Ogier/Julien Ingrassia (F/F) scored the 17th overall victory for the Polo R WRC at Rally Poland, out of 20 rallies in total. The team result was completed with Andreas Mikkelsen/Ola Fløene (N/N) in second place thanks to an outstanding performance, and with Jari-Matti Latvala/Miikka Anttila (FIN/FIN) executing a resolute catch-up to finish in fifth place. With the WRC summer break just around the corner, Volkswagen has now extended its lead in the manufacturers’ standings to 147 points, which means the earliest that it can be knocked off the top spot is during Rally France in October. The win in Poland was the 21st rally victory for Ogier/Ingrassia, while Mikkelsen made it onto the podium in the ultimate rallying discipline for a second time, having also come second in Sweden. The seventh rally of the season constituted a premiere for Volkswagen, as it was the first time that the team lined up in the Polo R WRC in Poland. 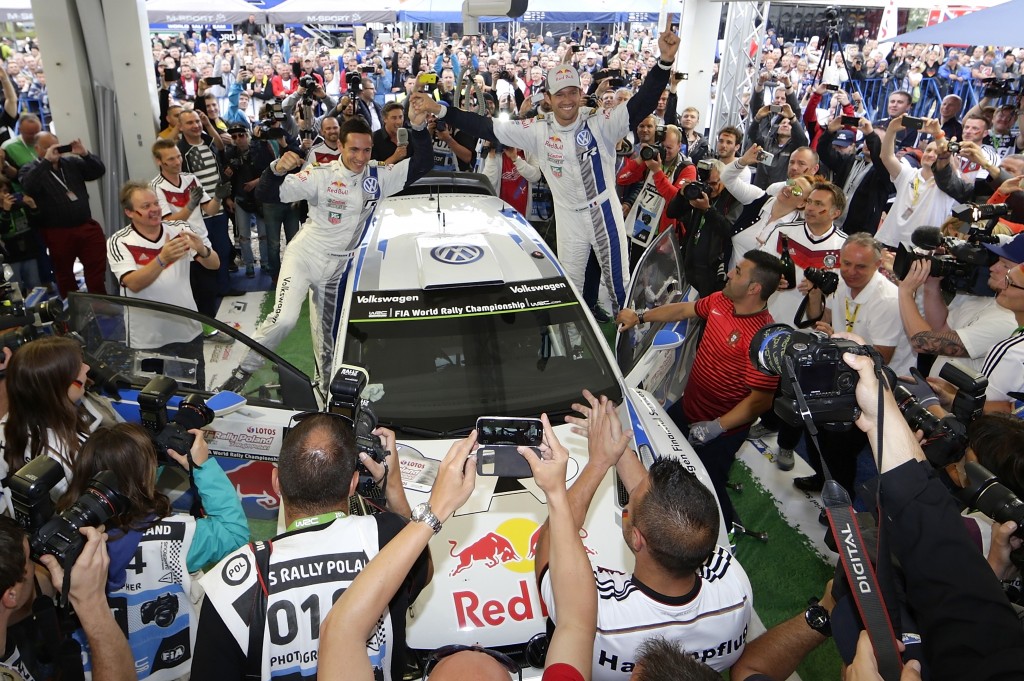 Triple lead in the WRC for Ogier, Latvala and Mikkelsen

Sébastien Ogier/Julien Ingrassia now have a lead of 50 points ahead of the second half of the season, which gets under way with Rally Finland on 31 July to 3 August. And their closest rivals are in the same camp as them: having finished fifth in Poland just seven tenths of a second behind Mikko Hirvonen (M-Sport Ford), Jari-Matti Latvala/Miikka Anttila remain in second place overall. And Andreas Mikkelsen has now reclaimed third place in the drivers’ standings thanks to his second place in Poland, and now trails Ogier by 83 points.

High-octane action in Poland: high speeds and lots of jumps

The fifth gravel rally of the year was characterised by high speed – the average pace in Rally Poland was the highest of all the rallies held so far this season. The winner Sébastien Ogier completed the 304.21 kilometres of the rally at a pace of 118.5 km/h. And Andreas Mikkelsen set a new record for the fastest special stage in the history of the Polo R WRC in the championship, with the fastest time he achieved during the ninth special stage – the Norwegian clocked up an average pace of 136.88 km/h over the 12.89 kilometres of the Wieliczki 2 stage. Mikkelsen went at full pelt for 80.21 per cent of this stage. 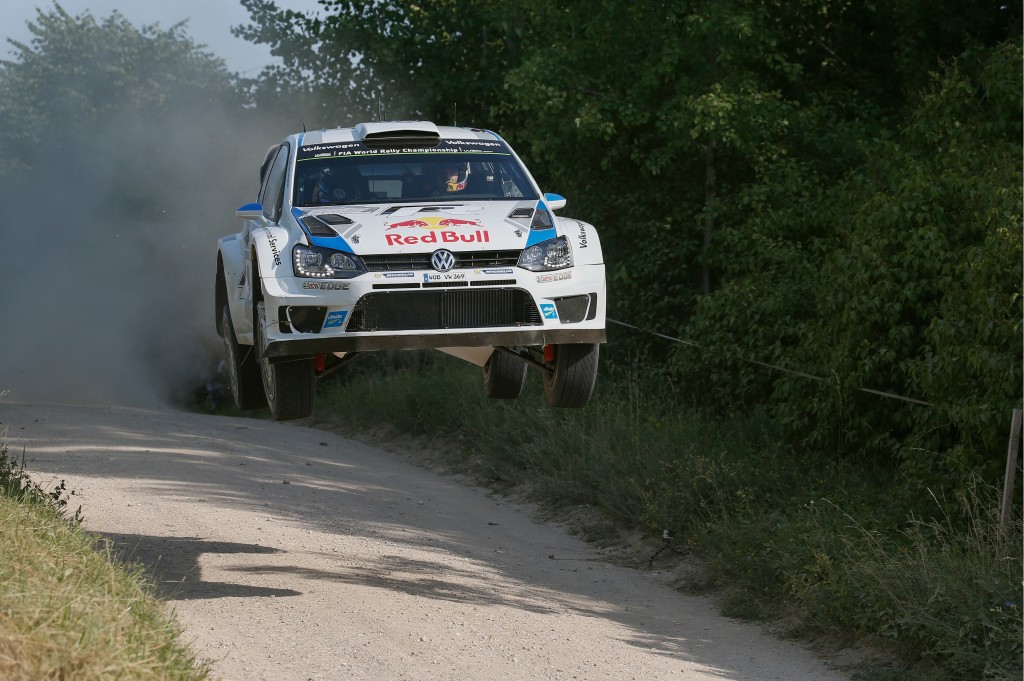 Having now notched up eleven wins in a row, Sébastien Ogier and Julien Ingrassia extended the success story of Volkswagen in Poland. Volkswagen remains unbeaten in the FIA World Rally Championship (WRC) since last year’s Rally Australia. Since making its debut in the event in January 2013, the Polo R WRC has scored 30 podium positions in 20 rallies, 17 of which were outright wins. The double victory for Ogier/Ingrassia and Mikkelsen/Fløene is the fourth of the current season and the sixth such victory in the last ten rallies. Volkswagen has scored the fastest times in 244 of the 365 special stages which it has contended in 2013 and 2014. 565 out of a possible 1,019 top-three times have been clinched by the Polo R WRC. And in Poland, the Wolfsburg-based World Rally Car secured 18 out of a possible 22 fastest times and 44 out of a possible 66 top-three times.

High energy: long rally days take it out on the drivers, co-drivers and mechanics

Hard graft and little sleep – Rally Poland pushed the drivers, co-drivers, mechanics and engineers to their limits. Each rally day started in the early hours of the morning and sometimes didn’t finish until after midnight. The drivers and co-drivers also had to contend with long liaison sections, some of which took them as far as Lithuania, where a remote service was also scheduled for the mechanics and engineers. The most impressive energy performance came from the Volkswagen mechanics on the Saturday of the rally: Jari-Matti Latvala and Miikka Anttila’s crew of mechanics had a mammoth list of work to get through during Saturday’s lunchtime service.

Latvala damaged the front left suspension of his Polo R WRC during the 14th special stage of Rally Poland. So within the space of just 28 minutes and with a helping hand from Sébastien Ogier’s crew, Latvala’s mechanics replaced the front dampers, the entire front axle including the steering, the front left spindle, the front underbody protection, the wiper engine, the windscreen, the engine cover and the front left fender, including the mudflap. And last, but not least, the tool bag had to be replaced too, as Latvala/Anttila had used the original bag for emergency repairs during the liaison section. And all the hard work paid off: Latvala/Anttila subsequently moved up from seventh to fifth place overall, won an additional five special stages and were among the top three at all times.

Ogier, Mikkelsen and Latvala grab all the Power Stage points for the second time in a row

The Power Stage, in which bonus points for the drivers’ and co-drivers’ categories are up for grabs for the top three drivers, continues to be a discipline in which Volkswagen excels. There have been 19 Power Stages since the Polo R WRC entered the WRC arena in January 2013, and a Volkswagen duo has been at the top of the rankings on 14 occasions. The Volkswagen drivers and co-drivers picked up bonus points on 35 occasions, thanks to ten second and eleven third places. Sébastien Ogier scored his 15th Power Stage win in total in Rally Poland, and his eleventh with Volkswagen. 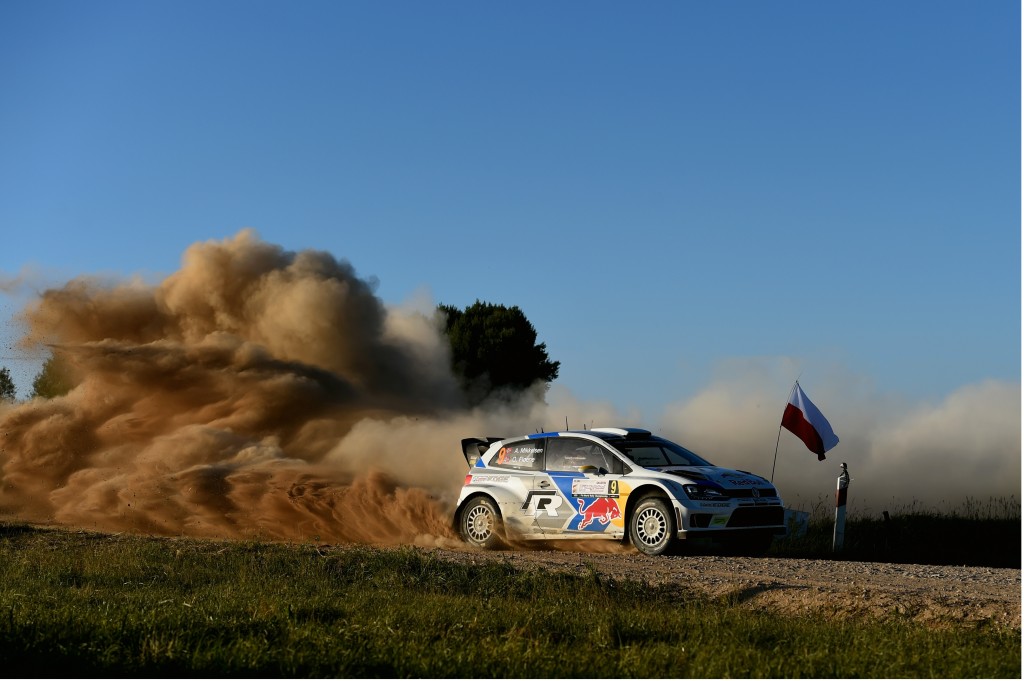 The WRC was infected with football fever in Poland thanks to a visit from Poland’s former national goalie and Champions League winner Jerzy Dudek, the excitement of watching the matches together and also lots of football-related action. The Volkswagen Services of the three Polo R WRC vehicles was performed on stylised football pitches. And the most popular way for the team members and visitors alike to pass the time during the many long breaks in the schedule was to challenge each other to some table football matches – including a match between Volkswagen and M-Sport Ford. The Red Bull football freestyle world champion Szymon Skalski demonstrated his footballing skills. And the Volkswagen staff at the service park wore the national strips of their respective home countries. A Brazilian football shirt signed by Volkswagen brand ambassador Neymar Jr. was raffled off by Volkswagen’s partner Castrol together with Sébastien Ogier. And during the autograph signing sessions, the Volkswagen drivers kicked signed footballs into the crowds.

“It’s just brilliant – this win was an important one in the world championship stakes! Julien and I had a perfect rally here in Poland. The stages were incredibly quick – and the huge numbers of fans along the way were simply brilliant. As a driver, you can enjoy every single kilometre. On the final day today, there were some wonderful stretches again where I had to force myself not to go at full pelt. Because obviously we didn’t want to jeopardise our lead too much. I’d like to say a huge thank-you to my team, who provided me with a perfect car every day. The Polo R WRC is simply a great car to drive. You can hurtle through the forest at 200 km/h and everything works like Swiss precision clockwork.”

“It was a rally with some ups and downs, but ultimately a happy ending. I lacked confidence at the beginning and the vehicle set-up wasn’t right, and then we lost a lot of time due to the damaged damper. But ultimately what matters the most is that we managed to hit the right pace again and were therefore able to partially close the gap to the front-runners. I have now also overcome my demons from Rally Poland in 2009, as I managed to win the stage where I was forced to pull out back then. Unfortunately, Sébastien Ogier has increased his overall lead in the WRC – but we will try to reduce the gap again in Finland.”

“Second place and my second podium finish in the WRC – it’s a great result. It was an honour for me to battle it out with the reigning world champion for the top spot for so long. I didn’t manage to beat him and take the lead in the end, but my aim is still to one day stand on the top step of the winners’ rostrum. We will endeavour to gradually improve to the levels of Sébastien Ogier and Jari-Matti Latvala – and we took a big step in that direction here in Poland. For now, though, I’m going to celebrate the fact that I came second and recognise what we achieved this weekend. I really enjoyed the special stages. They were fast and smooth – and that’s the kind of driving I like.”

“What a great premiere for Volkswagen in Rally Poland! This WRC event was terra incognita for our team, so securing the fourth one-two victory of the year here and extending our run of successes is a huge achievement for the entire team. Sébastien Ogier was once again in a class of his own in the tough conditions, Andreas Mikkelsen demonstrated why he likes fast and smooth tracks, and Jari-Matti Latvala put in a strong catching-up performance. The mechanics pulled off a major feat to put his Polo R WRC back in the running, so it’s hats off to them. After four long, hard rally days with very little sleep, we all deserve a beer.”

… the first podium finish for Ola Fløene in the WRC. Finishing the rally in second place marked Ola’s first time on the winners’ rostrum in the ultimate rallying discipline. The 45-year-old Norwegian only got back into a cockpit for Rally Italy three weeks ago.