This car lived a few lives with me. I have dubbed them Version 1.0 and Version 1.5 to clarify. This is the story of rally car ver. 1.0.

This car was featured on Bring a Trailer in 2010, right as I was looking to get something together to rally. Technically, I have been trying to get my foot in the door to actually DRIVE in a rally for years, but one way or another something got in the way. By something, I mean money. That’s actually why by this time I had been volunteering, organizing, and navigating, but I digress. Buying a rally car seemed like a viable option, especially since its both cheaper and faster than doing a build. A friend linked me the ad, I called the owner, and a deal was struck. A truck and trailer was borrowed from a friend of a friend, and I drove out with a different friend to pick it up from Portland to take it home to Boise.

The best thing about buying a used race car is you always get spares. Tons of spares. As in, you start stuffing them in awkward places and bungy cording things to the roof. Anyway, I was now the proud owner of a thoroughly used rally car. Its not easy to pack 38 wheels, 6 doors, some hoods, and about a dozen crates, let alone try and park that mess in front of a taqueria.

The RX-7 had been around some time. Legend has it, the car was raced since new in some type of road racing, then moved on to rally in Canada. The earliest date in the SCCA ProRally logbook is the Doo Wops Rally in 2003. All told there are 25 rallies listed from Wild West to Olympus. Later examination of the paint strata showed a bright pink layer. Sparkly pink. Sadly, I haven’t been able to find the history pre-SCCA nor what glory the pink paint held. 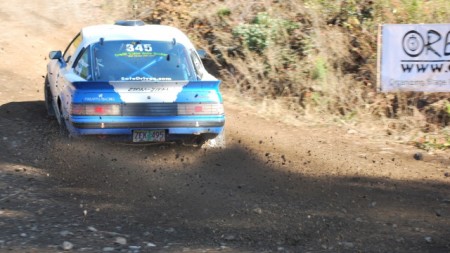 The car was pretty beat by years of racing. But damn did she run good. It sported a 12a, built with a streetport by Pineapple Racing, sucking fuel through a 48 IDA. One of the previous owners had the Weber tuned professionally, and it showed. The transmission was a hybrid of the miata and RX-7 M-type transmission. The suspension was Bilstein P30s in front, and P46s in the rear. The springs were only about 10% stiffer and probably 10% higher. A few oiling mods and a higher amperage alternator keep the car happy. Aside from the that, the car was relatively stock. The OE brake hydraulics stopped the car on a dime. The 13 inch stock wheels never went out of round. Why mess with a good thing?

The first time I was able to drive the car in anger was at a rallycross course test day in a large gravel pit. There was a jump as an “option” in one of the straights. There was a jump, I had a rally car. The jump was now mandatory. Honestly, the car handled it better than I thought. My head only bounced off the roll bar padding a little and I flung into into the next turn effortlessly. But I soon found the car to be bouncing in the front. As in, the wheels were seen coming off the ground. Turns out, the car handled the jump worse than I thought, and I had bent both Bilsteins up front. I now had less than 1″ of travel. Oops. 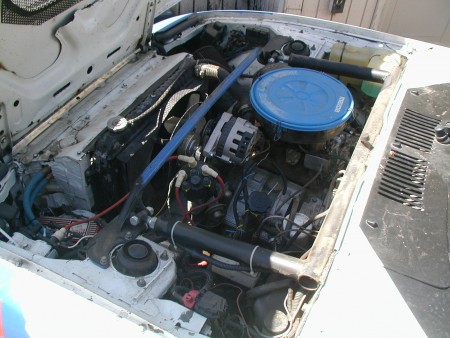 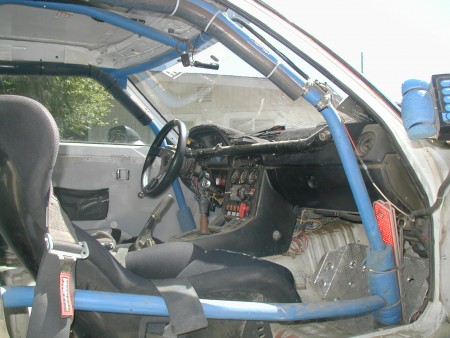 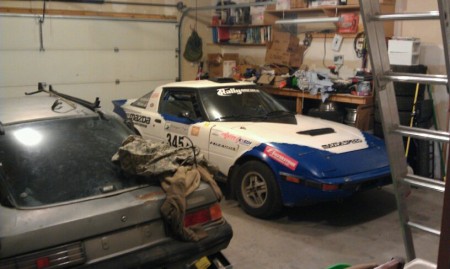 Around Boise, there are some wonderful roads. Those local to the area know it well. The roads snake up and down the mountains. It was on these roads I learned that spent gravel tires work wonderfully on the pavement. The compound is quite soft and provides great traction when the nubs are worn down to nothing. Better still the broken up and/or dusty sections went by unnoticed. I have great memories of bright flashes in the mirrors from the fire expelled between shifts. At 35 mph. Because I’m responsible and all that. The steering, slow for rallying, was better on the pavement. Everything considered, it was an RX-7. Funny thing is, this was my umpteenth RX-7, but whole experience was nothing like the others. 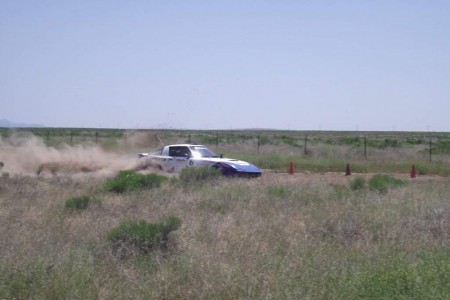 One fateful day, my friend and I were running the car at the Idaho Rally Group rallycross just south of Boise. This course was nothing like the typical grass-o-cross, instead it consisted of about 0.6 – 1.0 miles of rally quality driving. The surface was loose and moon dust like. There are off-camber turns and elevation changes. Truthfully, if you live near Boise, go check out the events!  Anyway, we hot lapped the car to make our turns happen on time. Despite the heat, the car took it just fine. It was after all, a stage rally car, and this was only rallycross. I was maintaining second overall, chasing a 91 Civic RT-AWD. Hey. Don’t laugh, in the hands of a good driver (he is) those little things scoot on loose surfaces. Late in the day, on the second lap of the course, I was wide open on the straight along the barb-wire fence. Suddenly, the sensual sound of rotary gave way to single piston misfire. Uh oh. Sure enough a bolt holding the air horn came loose and fell in the motor… at least it died doing what it loved.

So now what? The engine was kaput, and truth be told, the body was in sad shape. It became a build. It also became a daily driver, a money pit, and a moderate disappointment. Enter RX-7 rally car Ver. 1.5! (to be continued)