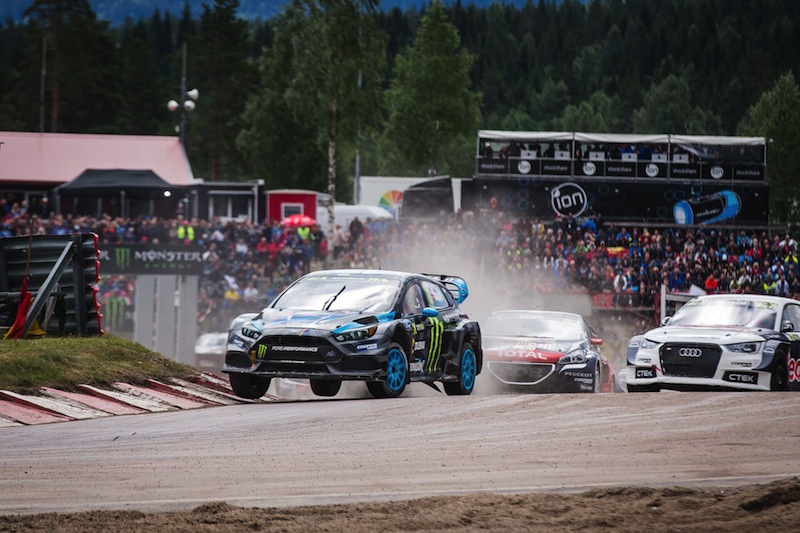 Hoonigan Racing’s Andreas Bakkerud continued his streak by winning this past weekend’s World Rallycross event in Höljes, Sweden. The win marks the first ever back to back win for the all-new Ford Focus RS RX rallycross car, as well as the first-ever back-to-back win in World RX for Hoonigan Racing Division.
Both Bakkerud and teammate/team boss Ken Block had strong outings at the start of the event in open practice with Bakkerud placing 3rd fastest and Block 4th fastest. However during Saturday’s Qualifying 1 races, both drivers struggled a bit. While Block finished Q1 just inside of the top 12 sitting 11th, Bakkerud suffered two punctures and some mechanical damage, forcing a DNF result. However, in spite of the challenges, Bakkerud went out for Qualifying 2 and finished 2nd overall, placing him in P7 going into Sundays Q3 and Q4 races. Block suffered windshield visibility issues in his Q2 race and unfortunately dropped out of the top 12 heading into Sunday’s racing.
Sunday saw Bakkerud on top form for the “Magic Weekend” as it’s called in Höljes, Sweden. He finished Qualifying 3 in 2nd overall and then outright won all of Qualifying 4, placing him on Pole Position for Semi Final 2. Block attempted to recover from the setbacks of Saturday’s racing, but was unable to break back into the top 12 despite having a very solid Q4 showing (track conditions were once more a factor as Block’s race all ran on rain tires and as conditions improved thereafter, subsequent races ran on slicks making for a large time differential between the first Q4 race and the final Q4 race, pushing Block out of the top 12), narrowly missing out on the Semi Finals.
For Semi Final 2, Bakkerud led off of the line and held that lead for the entire Semi. This netted him a Pole Position for the Final. During the Final, Bakkerud was narrowly beaten off the line going into Turn 1, but drove a tidy and blisteringly fast race despite having 9 time WRC Champion Sebastien Loeb on this rear bumper the entire way. He managed to take the overall lead by jokering on the last lap, squeezing past Timmy Hansen and nabbing the checkered flag in 1st overall in the final in front of 44,000 fans. 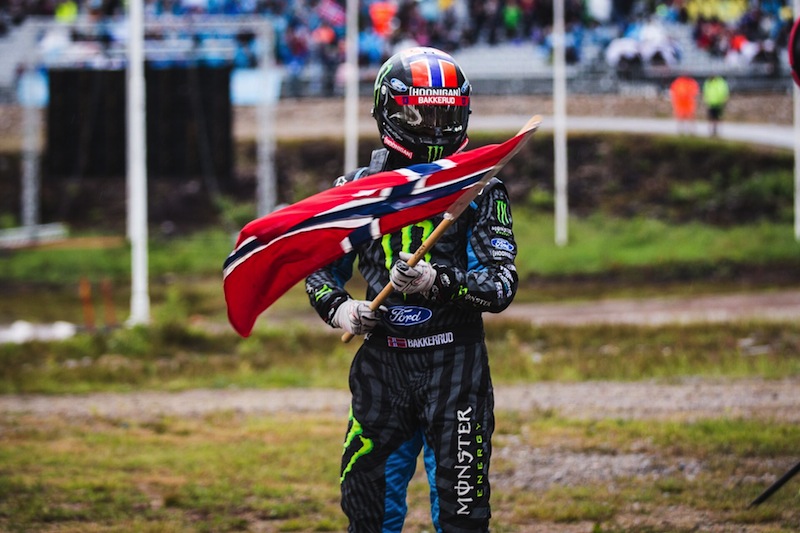 “I absolutely had an incredible event here in Höljes,” said Bakkerud. “I love this track, I love the fans, I love my Baby Blue supporters, my Hoonigan Racing Division team and especially this Ford Focus RS RX! It’s a dream to be able to win three weeks ago at my home event in Norway and then extend that streak her in Sweden, which feels like a second home to me. It’s incredible!”
The win in Sweden marks the 4th-ever podium in Höljes for Bakkerud and his 2nd-ever outright win at the track. The points he earned also moved him into 3rd place overall in the drivers championship with a 110 total points (Ekström sits first with 142, Solberg second with 137).
“I’m beyond proud of Andreas and his driving here this weekend,” said teammate and team boss Ken Block. “We brought Andreas onto this team this year for a number of reasons, but one of the biggest ones was because we knew he could drive like this. To have him bring home back-to-back wins with this brand-new racecar that we’re still developing is a testament to how skilled he is behind the wheel. And to move up into 3rd overall in the driver championship points with half of the season to go is a huge accomplishment. I wish I could have had a similar weekend myself, I had the speed, I just needed a bit more luck. But, that’s racing.”
Both Bakkerud and Block next compete in Round 7 of the FIA World Rallycross Championship in Canada, August 6th and 7th.