When it comes to building extreme racing Corvettes, one name that consistently rises to the top of the list is John Greenwood. John Greenwood introduced his “widebody” C3 race car at the 1974 Detroit Autorama show at Cobo Hall. This muscular, wedge-shaped takeoff on the popular Sting Ray Convertible with its removable hardtop was the first of the true “silhouette racers.” The new widebody style had been the result of a collaboration between Greenwood and several GM insiders, including Zora Arkus-Duntov, Jerry Palmer, and Randy Wittine. The car ran on a Bob Riley designed chassis. 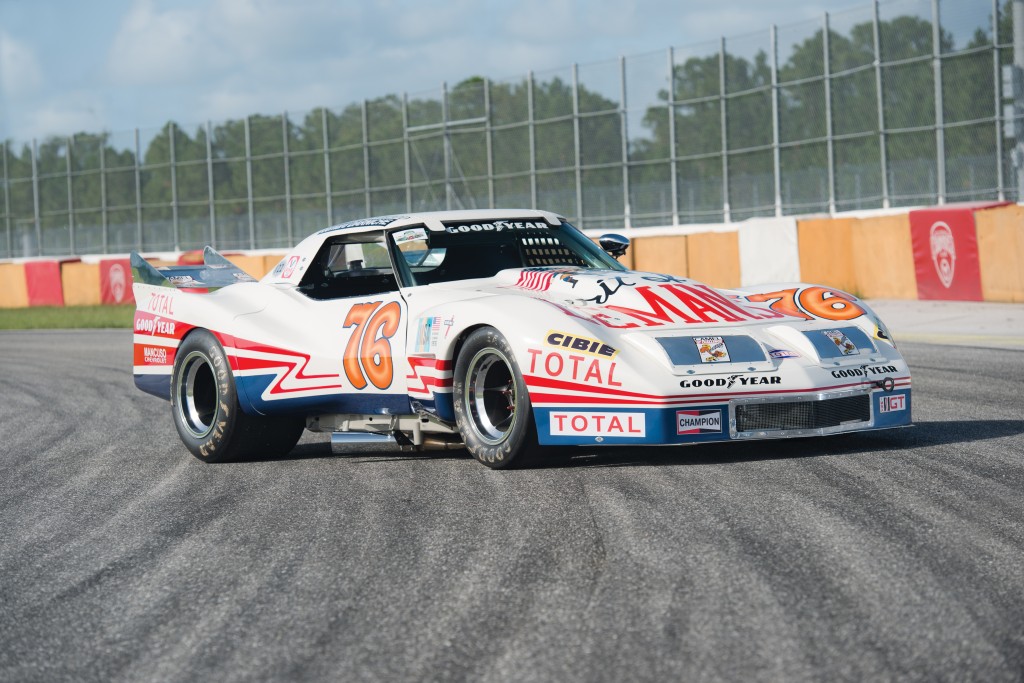 Intended to run with BFG tire sponsorship, Greenwood’s widebodies made their competition debut at Road Atlanta, winning right out of the box. In the years preceding our modern “ground-effects” chassis, Greenwood’s thoughtfully designed fiberglass bodies took advantage of almost every horizontal surface to improve downforce, allowing their huge V-8 engines to transmit as much power to the track as possible. Their widely extended rear fenders, for example, had flat, slightly angled top surfaces and were vented at the rear edges to reduce lift caused by air that was trapped below the chassis, a practice that bent the rulebook but managed to slip by the scrutineers. The cars also had full belly pans, later called rear diffusers. Although these pans were an example of advanced aero engineering, despite their hypothetical advantage, they would be challenged by sanctioning groups of the day. Regardless, the pans had been designed as a sacrificial element, and it only proved gratifying to see the ruse work. 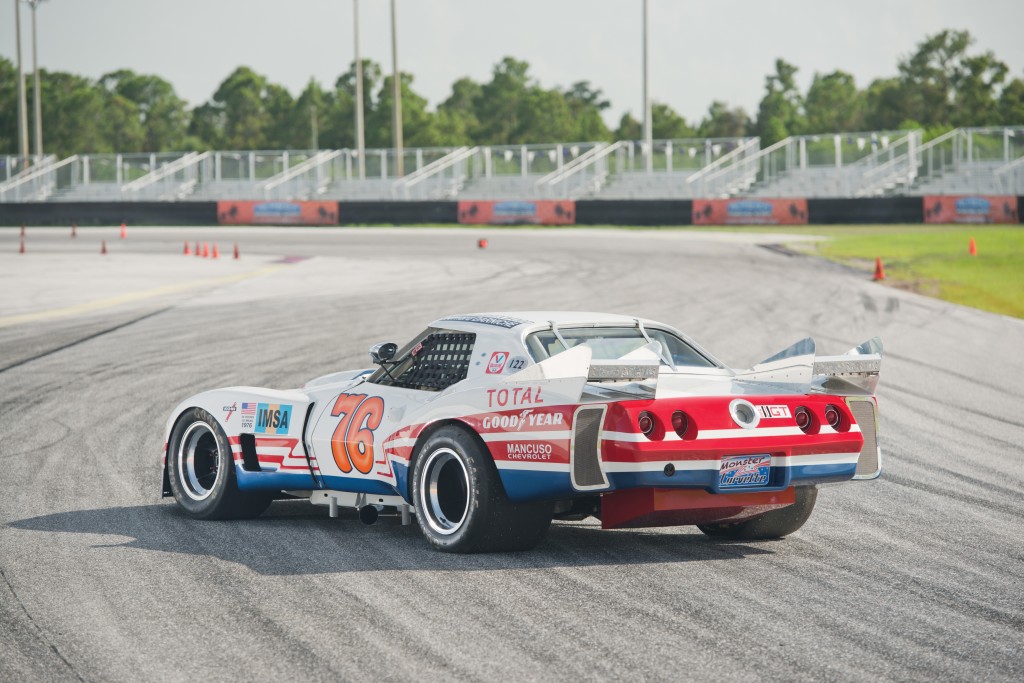 Beneath the sleek bodies of Greenwood’s “customer cars” were new, steel, GM-sourced frames, triangulated and strengthened with full roll cages designed by Bob Riley. Front suspensions used reinforced Corvette A-arms, and the customer could specify coil-over springs and shocks; coil-over springs and shocks could also be specified by the customer for the rear suspension, depending on the series for which the car was intended. In some cases, one leaf of the original steel transverse leaf spring could be left in place to meet the needs to have a “stock” suspension system in place. These big racing machines also needed big engines to propel them; Greenwood opted for all-aluminum Chevrolet big blocks running Jim Kinsler-developed mechanical fuel injection on a cross-ram manifold. These powerhouse motors developed a conservative 700+ horsepower with good reliability. Wilwood disc brakes were installed, and Greenwood-mounted, Sterling-spoked alloy wheels of a 15-inch diameter, 11-inches wide at the front and 17-inches wide at the rear, were also installed. 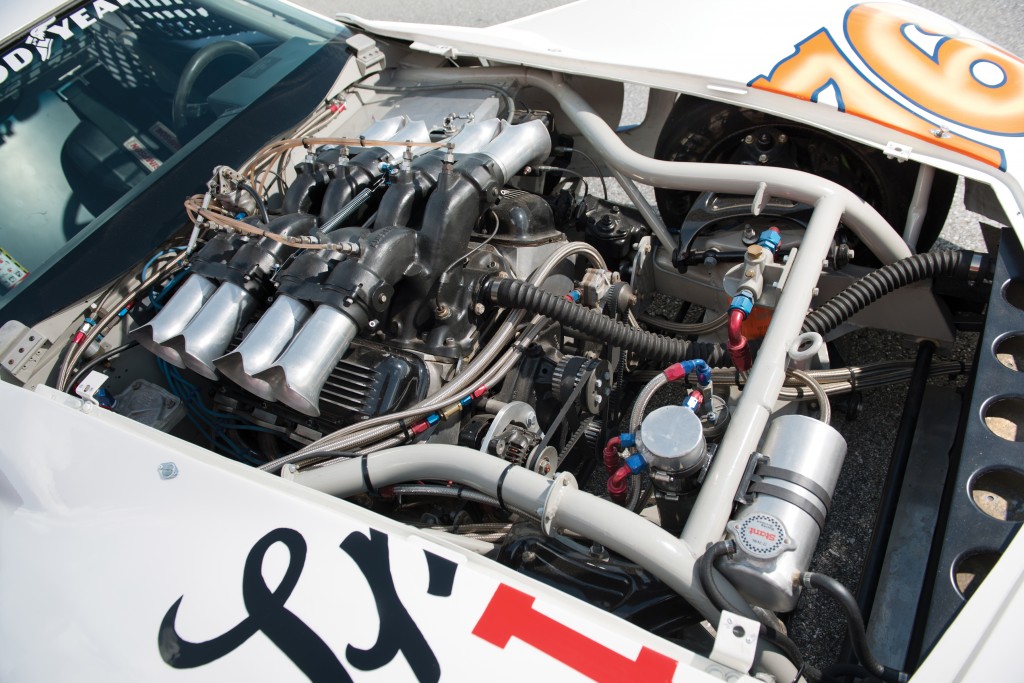 CC007 was built for Chicago-area racer Rick Mancuso, one of Greenwood’s friends, who had planned to run the 1976 Rolex 24 Hours of Daytona and then the 12 Hours of Sebring; however, it was not delivered until just before the Sebring race. Entered in the GTO category by Mancuso, with co-drivers Irwin Jann and Greenwood’s brother, Burt, the car was damaged in practice and didn’t start. 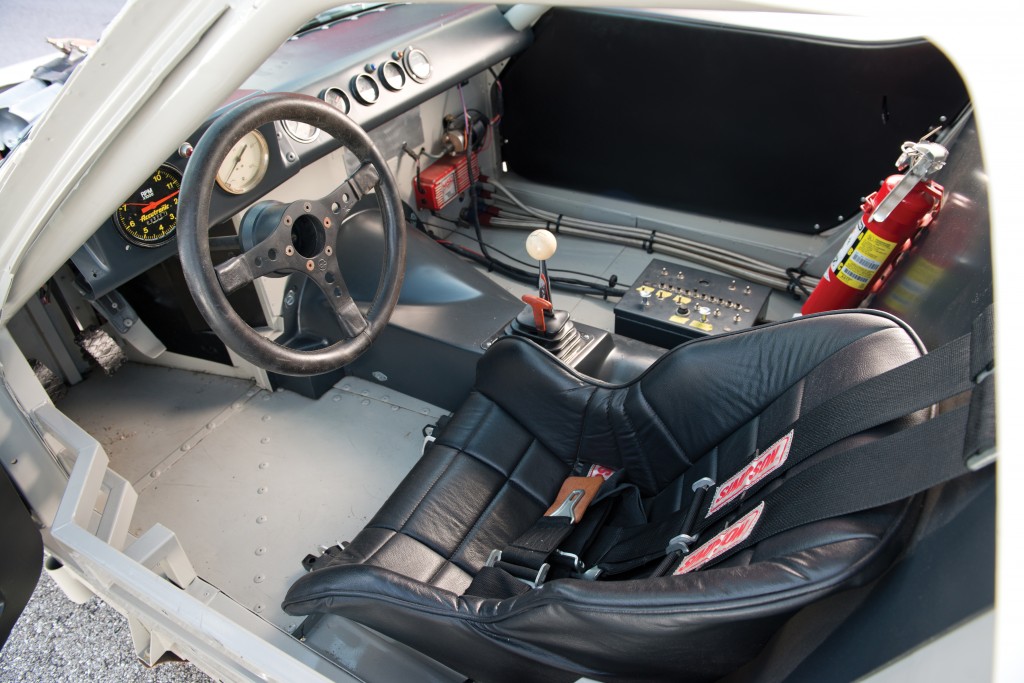 Meanwhile, John Greenwood, who had raced Corvettes at Le Mans in the early 1970s, had been asked by race organizers to return to France that June. The world oil crisis had drastically thinned the entry list, and the colorful Greenwood team cars, with their big roaring V-8s, had proven great crowd favorites on their previous attempts. The French government arranged $55,000 in appearance money, perhaps the first time that may have occurred, and Greenwood accepted the bid. 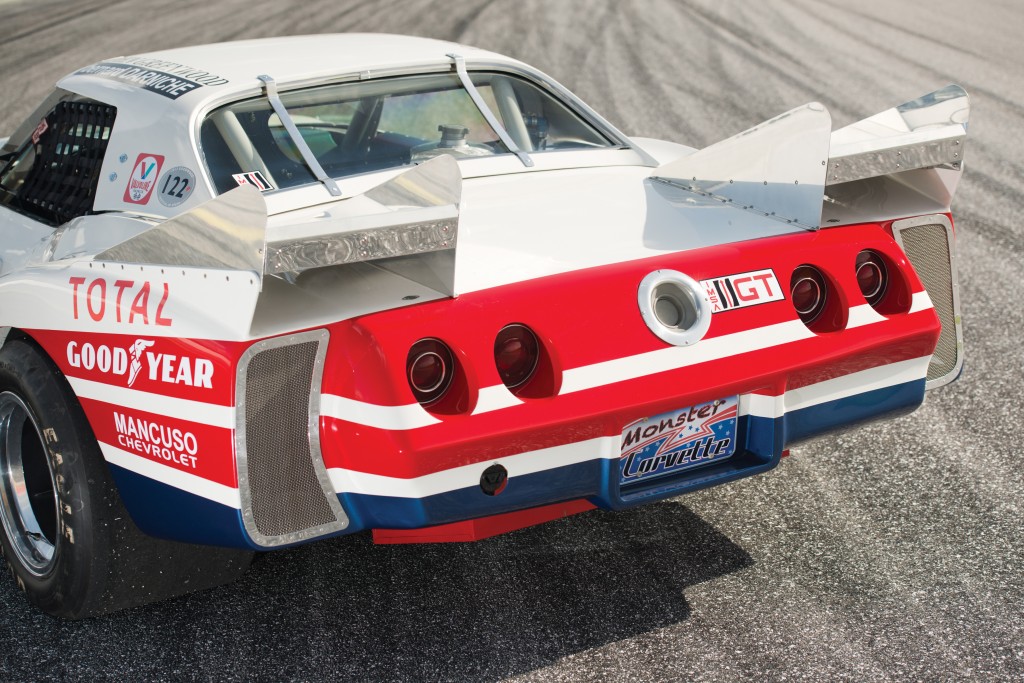 His own car had also been damaged at Sebring, and there wasn’t enough time to build a new one from the ground up, so Greenwood persuaded Mancuso to lend him CC007 for the attempt. Mancuso was to be part of the team, along with emerging F1 driver Jacques Lafitte. Mancuso, an employee at his father’s large Chevrolet dealership, recalls that his father refused to grant him additional vacation time, and he had to decline the invitation. Lafitte was also unable to participate. Greenwood brought his brother, Burt, back into the project and recruited French rally driver Bernard Darniche to replace Lafitte. With a lot of “back door” assistance from General Motors engineers, the car was completed and shipped to Le Mans. 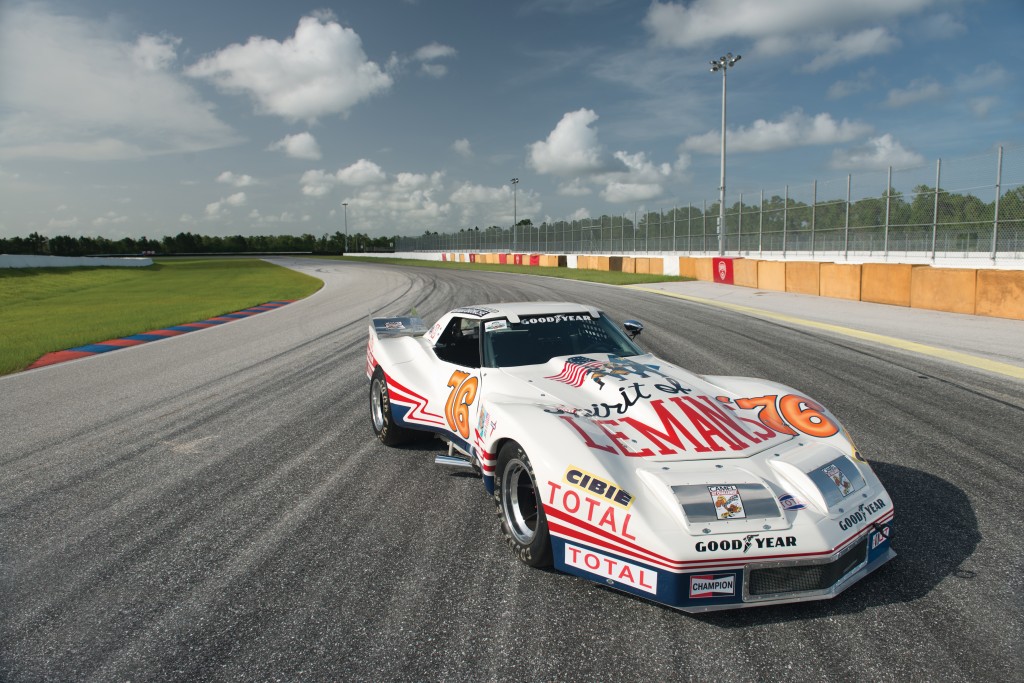 Greenwood put the renamed Spirit of Le Mans 9th on the starting grid, an impressive accomplishment in itself, with a qualifying time of 3:54.6. The widebody Corvette, adorned in dazzling American and French flag livery, and carrying number “76” to commemorate America’s Bicentennial, consistently topped 220 mph on the long Mulsanne Straight, as a testimony to brute force and aerodynamic efficiency. The car ran strongly until 8 o’clock the next morning, in its 16th hour, when a burst tire forced Spirit of Le Mans to retire. The car was classified in 49th place. 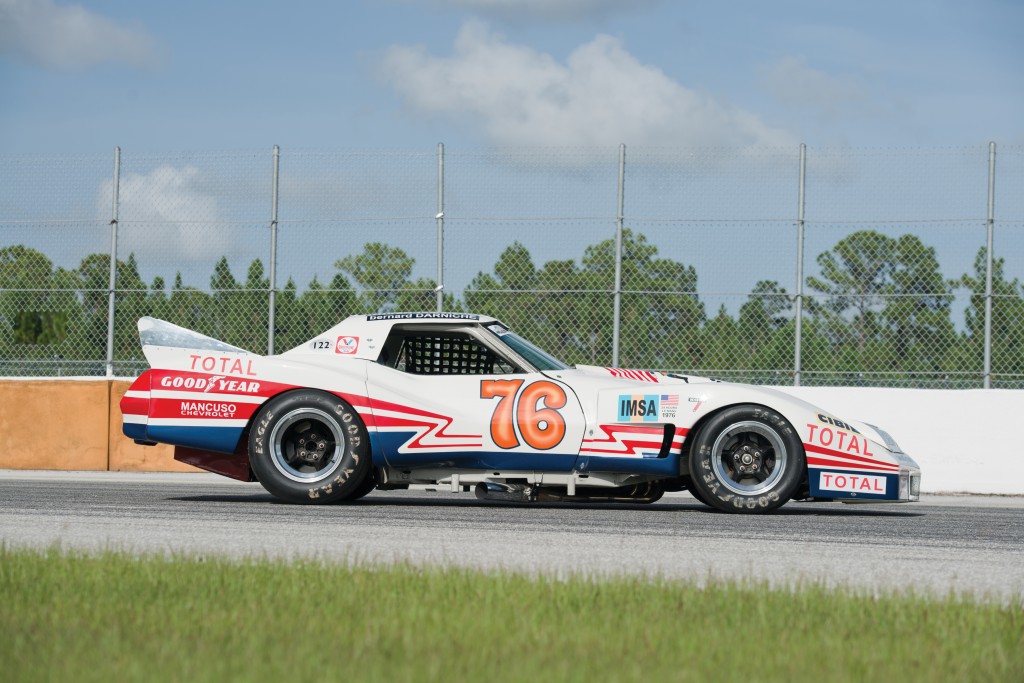 Following Le Mans, Greenwood repaired the car and returned it to Mancuso, who campaigned it successfully in IMSA for several seasons, bearing his City of Chicago livery. Corvette historian Wayne Ellwood says Mancuso’s car passed through several hands before Canadian racer and collector Jack Boxstrom sold it to the current owner and consignor in the early 1990s. The consignor gave the car its first full restoration, which consumed nearly eight months.