Porsche’s Type 904, officially called the Carrera GTS because Porsche and Peugeot were in dispute over numeric designations with “0” in them, succeeded the RSK Type 718 as the last sports-racing iteration of the 356 series. Developed after Porsche left Formula One in 1962, the 904 (as it soon became popularly known) was also the last full-competition Porsche that could be readily driven on the street. 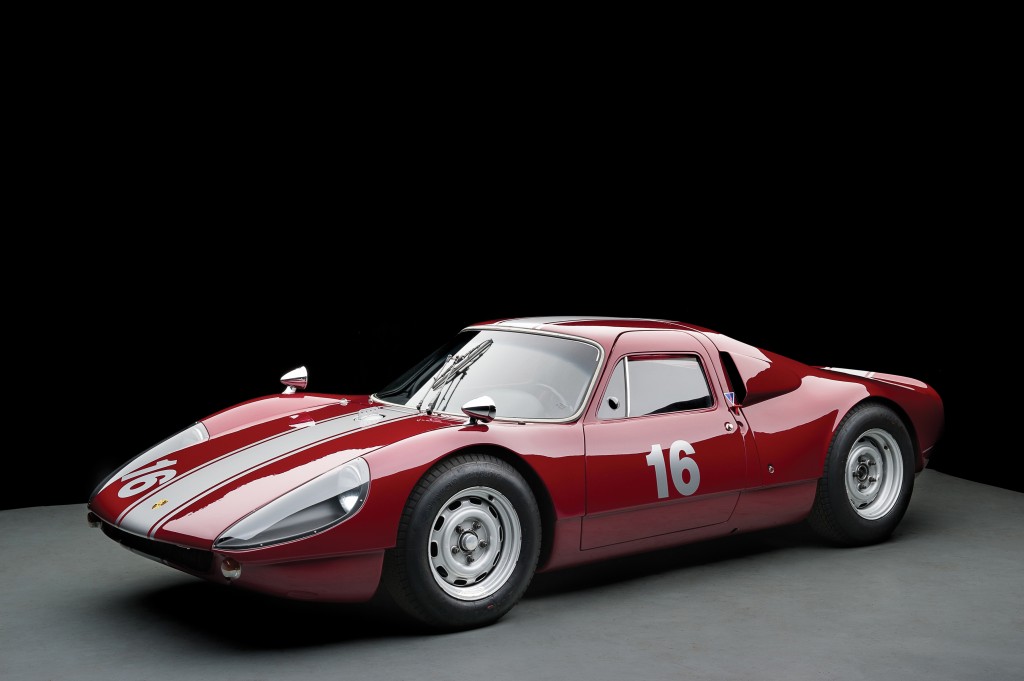 The 904’s designer was 28-year-old Ferdinand Alexander “Butzi” Porsche III, the son of company chairman “Ferry” Porsche. “It was my favourite”, he later told Porsche historian Karl Ludvigsen, “Because I did it alone and there wasn’t this fight to change it or make it newer. It was designed and finished”. 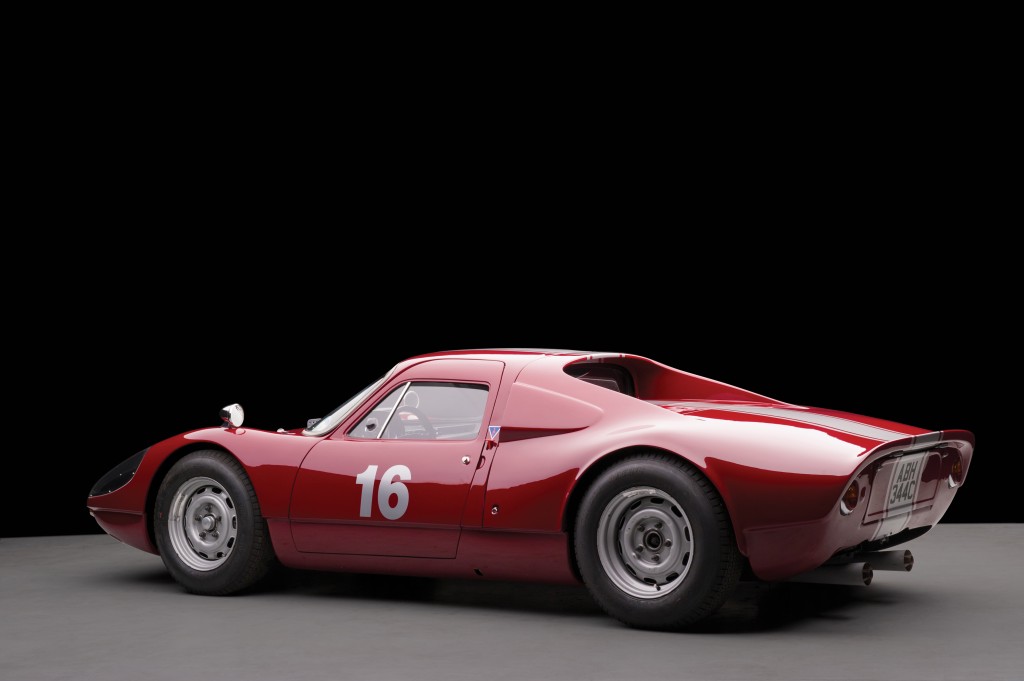 Ferdinand Porsche III had astutely chosen industrial design as his profession. As the new head of Porsche’s design department, he shouldered an immense responsibility to continue the Stuttgart firm’s fine traditions. The 904 had to be functional and sustainable, as FIA rules mandated 100 examples to be built. Porsche’s 1961 Model 718 competition coupé was the 904’s inspiration, but the new race car, with its strong, full-length character line, rakish lift-up tail, and ultra-low 41.9-inch height, was much better looking. 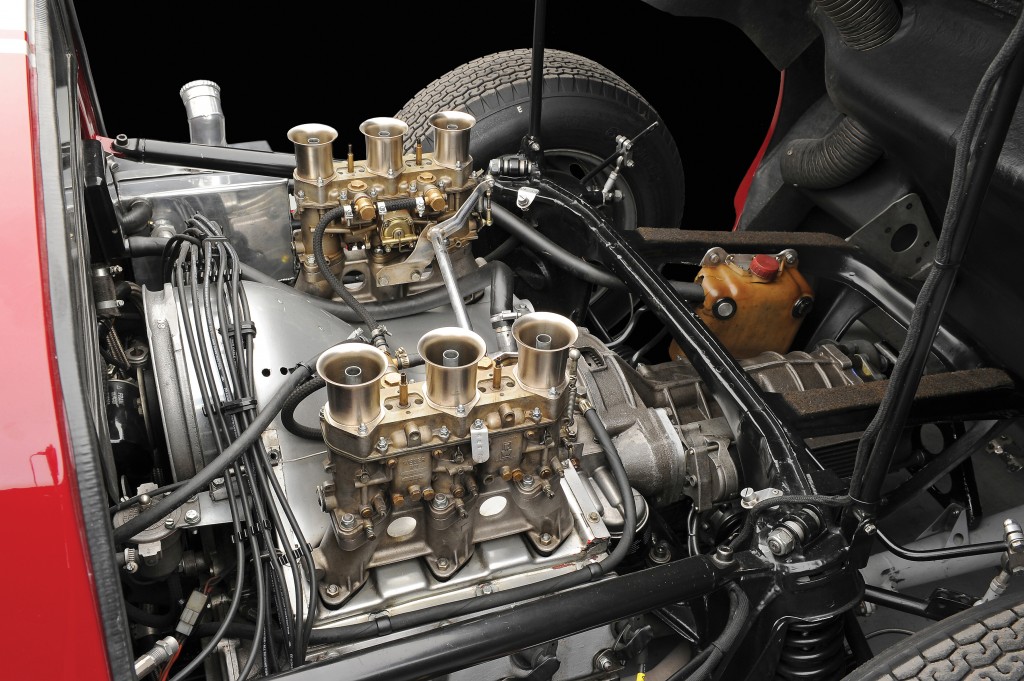 A chassis of steel pressings embraced the well-proven, four-cam flat-four Carrera engine, which was now mid-mounted. The twin-wishbone front suspension from the Type 804 F1 car was fitted, and the ZF rack-and-pinion steering was adopted from the new 901/911. Zero to 60 mph could be accomplished in as little as 5.5 seconds, and the 904 could be geared for 160 mph, with four-wheel ATE disc brakes quickly bringing the car to a stop. 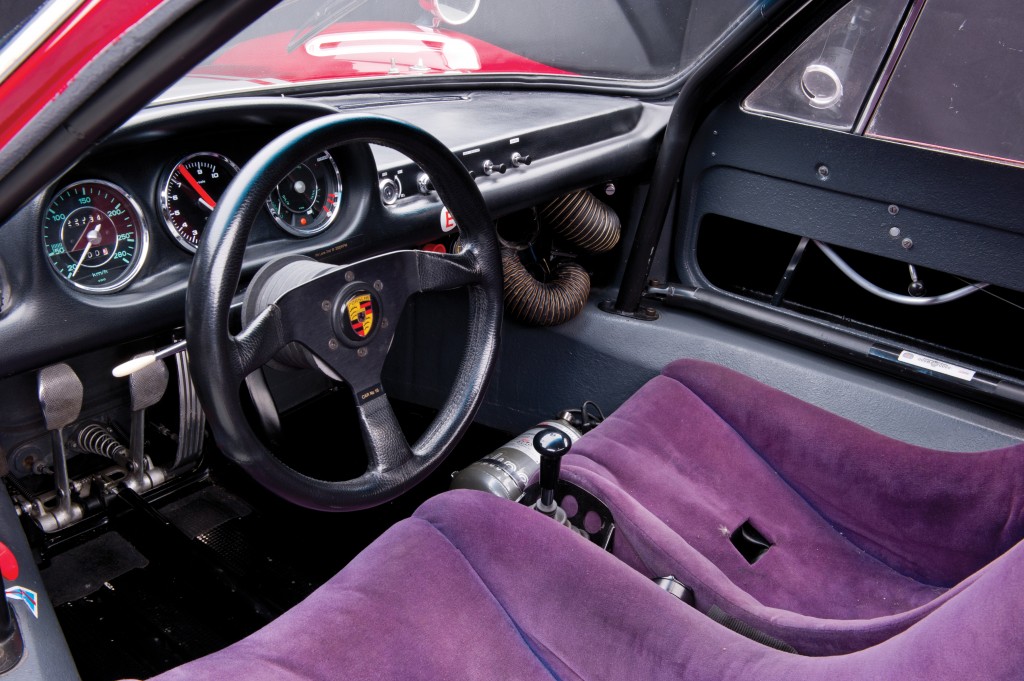 To save weight, the sleek body shell was made of fibreglass, which was formed from spraying chopped fiberglass onto a mould, and then bonded to the steel chassis for added rigidity. The twin bucket seats were fixed in place, but the beautiful cast alloy pedals were adjustable, and Porsche made several seat sizes available to suit varied driver heights. A new 904 was initially priced at $7,425, directly from Stuttgart-Zuffenhausen. 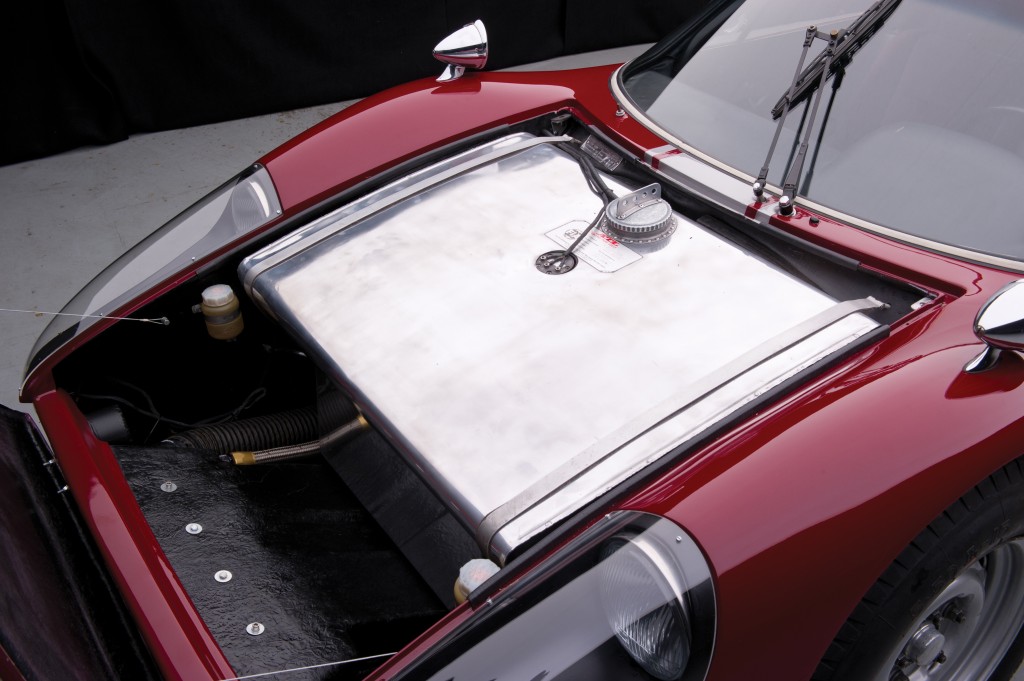 Competing in Sicily’s twisty 1964 Targa Florio, a pair of 904s finished ahead of the bigger-engine Ferraris and Shelby Cobras; it would not be the first time Porsche’s “giant killers” accomplished that feat. Fifty cars were required for official homologation in FIA-GT Group 3; although, it is believed that more than 100 examples of the 904, in various configurations, were actually built. All but 21 were sold in the first two weeks following the cars launch. 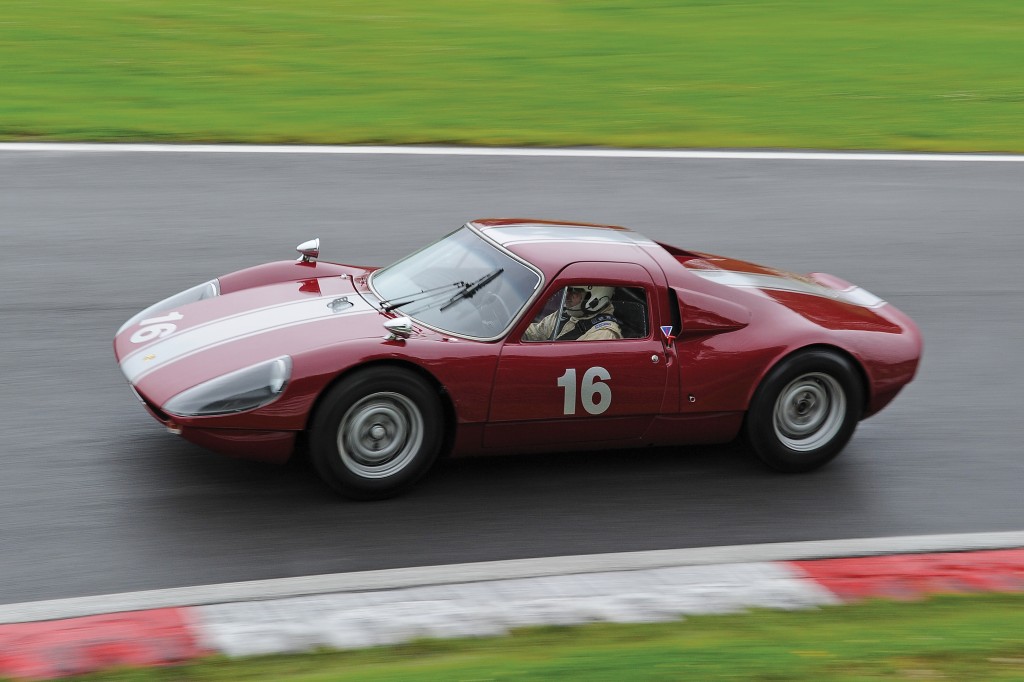 In 1965, several examples were fitted with Type 901 six-cylinder engines (904/6), and even a few eight-cylinder, Type 771, 225-brake horsepower, 2.0-litre cars (904/8) were built. According to the Le Mans entry paperwork from 1965, a copy of which accompanies this car, 906-012 was initially built with an eight-cylinder before the two-litre flat-six unit was fitted for that year’s racing season. It was one of some half dozen cars to be so equipped. The six-cylinder cars were easily differentiated from the four-cylinder variants by the central fuel filler caps and vertical lift windows, whilst differences in brake ducts, fog lights, and side air scoops varied from car to car, as development was a continual and rapid process. 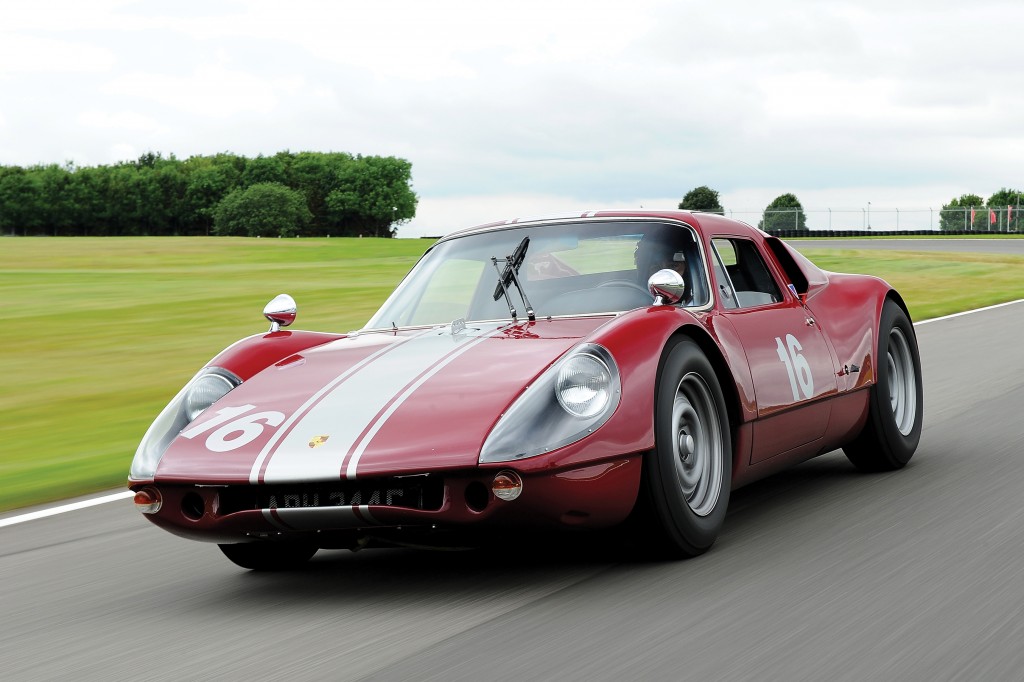 The copy of the Kartex, which was provided by Jürgen Barth, confirms that 906-012 was commissioned (händler) by “WE”, or Werkes, and was painted Silbermetall, the usual Works silver grey livery. The first owner was listed as Rennabteilung, or the Racing Department. Interestingly, this was the six-cylinder engine that Porsche engineer Hans Tomala had originally specified for the 904, but not even the production 911’s engine was ready in time, so a modified version for racing had to wait a few years. Once equipped with the new two-litre six, which gave a considerable increase in power, the Carrera GTS could step up to a new level of performance altogether. This six was sufficient enough for a 904/6 that was co-driven by Gunther Linge and Umberto Maglioli to take 3rd place overall in the 1965 Targa Florio. 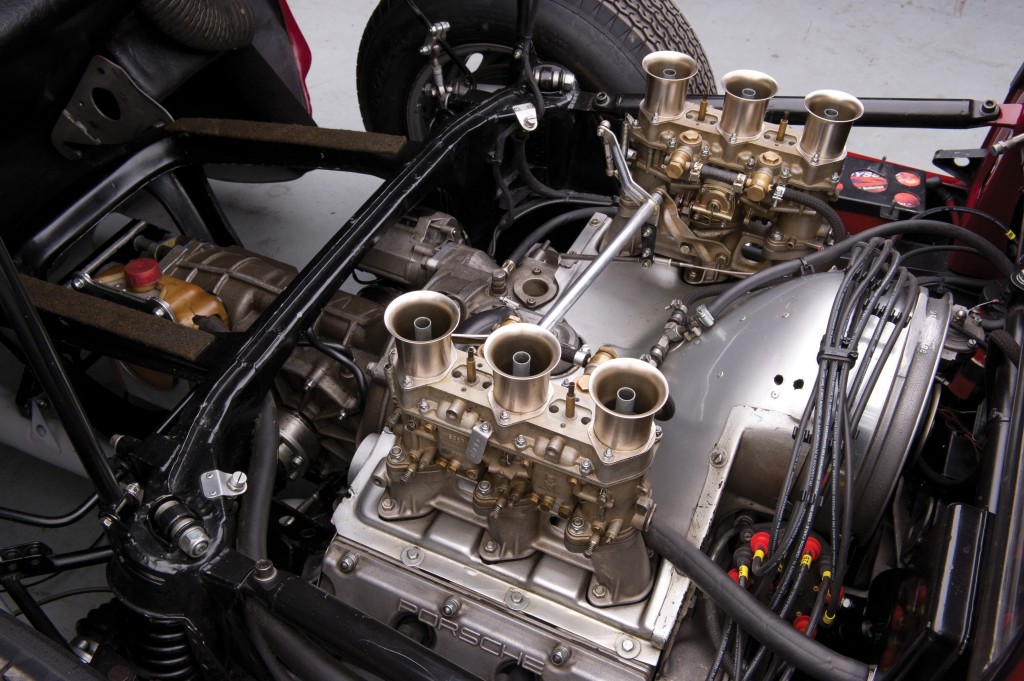 Porsche 906-012 was entered twice by the factory team for the 1965 international racing season, both in the Prototype (up to two litres) class. Firstly, at the Nürburgring 1000 km race, on 23 May, where co-drivers Peter Nöcker and Günter Klass, with race number 22, finished a superb 6th overall and 3rd in class, which was quite an achievement for a brand-new car in its first race. 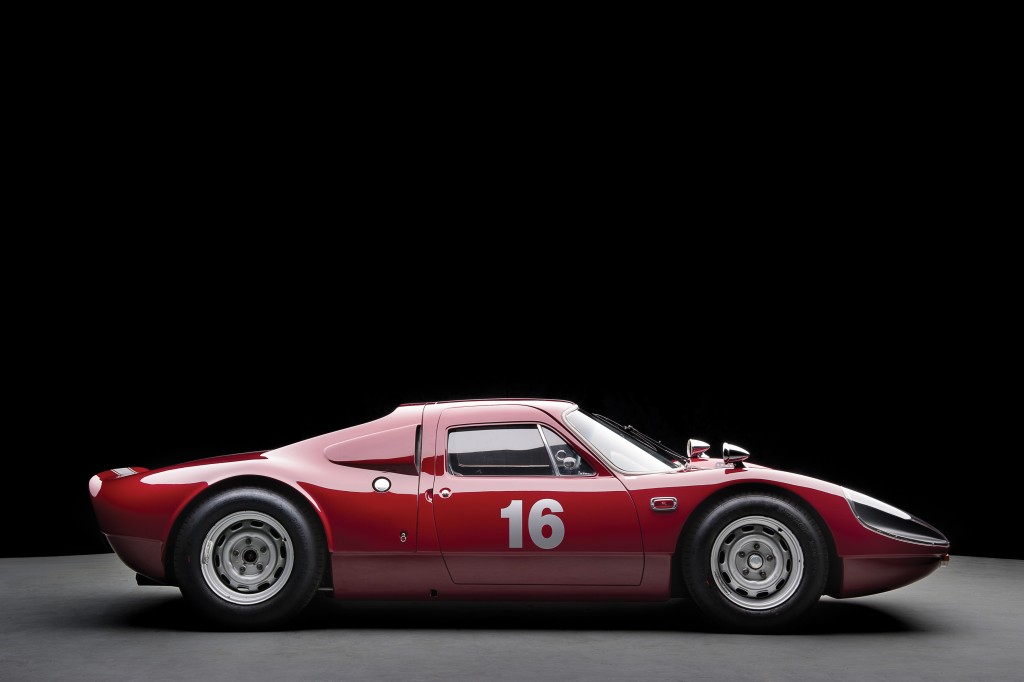 Klass took to the wheel of 906-012 again, along with a new co-driver, Dieter Glemser, when they competed at the 1965 24 Hours of Le Mans on 19 and 20 June. Wearing number 35, they drove through the night only to retire at 7:00 a.m. on Sunday, due to valve trouble. (A copy of the Le Mans entry paperwork is provided in the history file, and it makes for interesting reading.) Between 19 and 25 July 1965, Eugen Böhringer and Rolf Wütherich shared the wheel of 906-012 at the Coup des Alpes, wearing race number 7, but they failed to finish.

The Kartex then shows that 906-012 was sold on 5 May 1966, without an engine (ohne Motor), to George P. Drolsom, a talented American racing driver from Jacksonville, Florida. Drolsom had traded in a badly damaged 904 for 906-012. He then installed a correct six-cylinder engine and raced 906-012 at numerous venues, including Nassau Speed Week in the Bahamas, where he earned a 2nd in class at the Governor’s Trophy. At the 12 Hours of Sebring, driving with Bill Campbell and racing under number 47, they finished an impressive 21st overall, and, more importantly, 1st in class.