During the 1953 season, Kimberly’s 4.1 Vignale Spider was quite competitive, even finishing 3rd in championship points, but the car’s brakes sometimes faded from overheating, which prevented the driver from truly taking advantage of the 340’s raw power and torque. As a preferred Ferrari customer, Kimberly had an open dialog with the Maranello factory about this issue, and he soon clarified that he wanted specialized bodywork on his next Ferrari, in the interest of improved brake cooling. 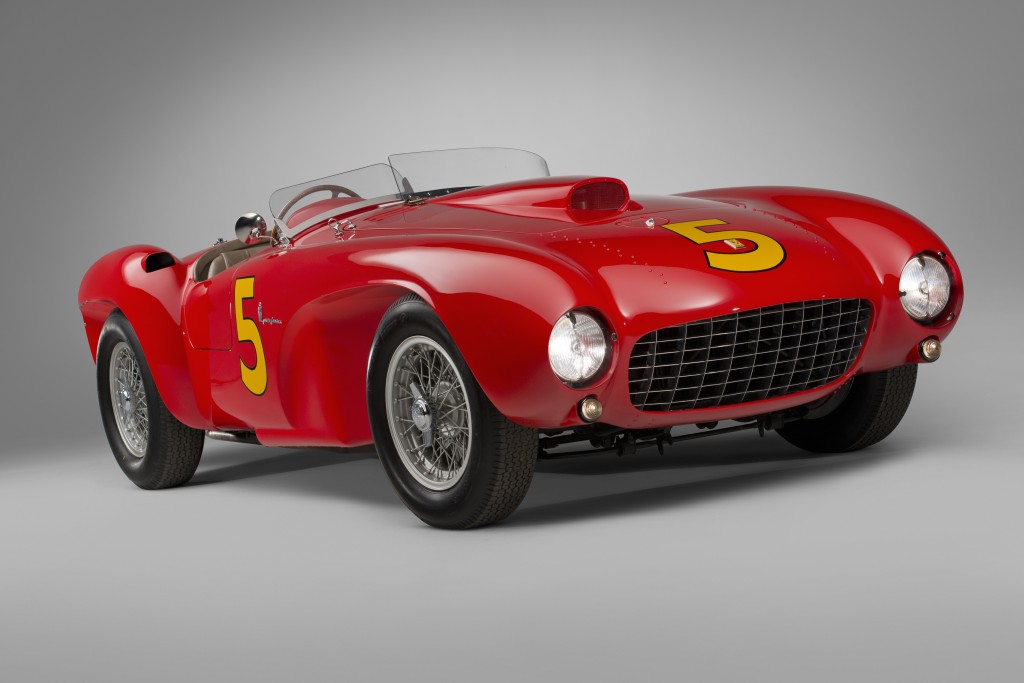 Pinin Farina, which had earned the contract to body customer versions of the 375 MM competition berlinetta that debuted at Le Mans in June 1953 (and really made a name for itself at the subsequent Carrera Panamericana), truly outdid themselves when crafting the body for Kimberly’s new car. By late 1953, the design firm had already built the first two examples of the twelve spider bodies that would eventually adorn the 375’s Type 102 chassis. For this third car, however, they took innovative measures to accommodate Kimberly’s request, resulting in a rather influential piece of work, which Kimberly himself evidently sketched out for them. 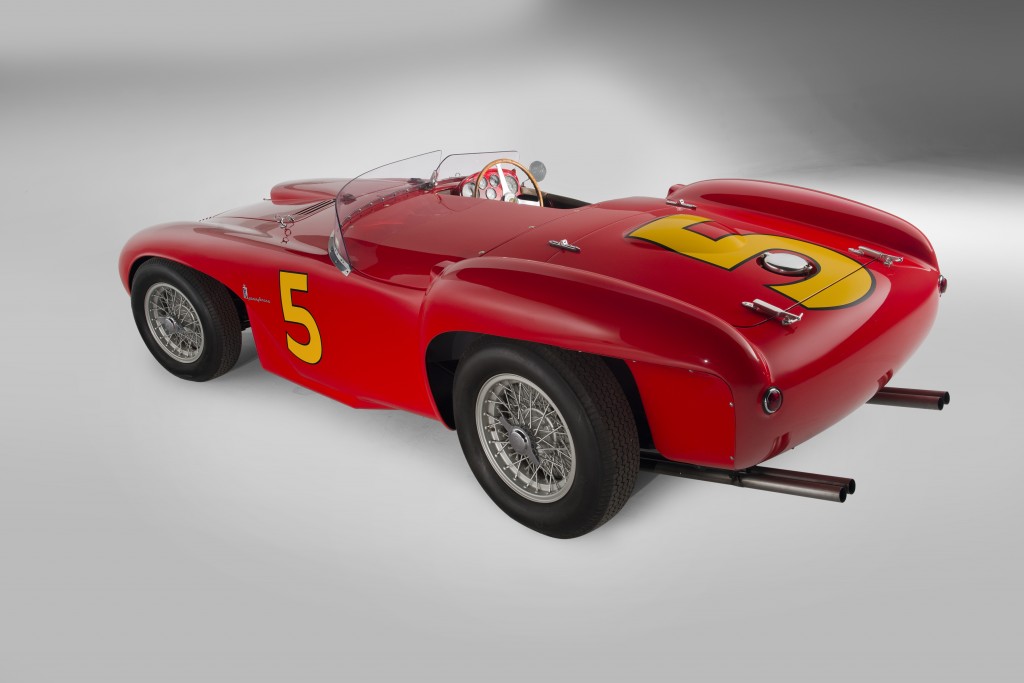 Cutting away the trailing sections of the fenders behind the wheels, Pinin Farina crafted one of the earliest examples of a pontoon-fender sports racer, paving the way for Scaglietti’s yet-to-be-born 250 Testa Rossa, which is more commonly credited as the design’s progenitor, and dozens of other purpose-built sports racers. The new coachwork was to be the only such body ever mounted on a 375 chassis, making the resulting car a one-off and absolutely stunning, particularly when considered in profile. It should be noted that this one-off 375 was Sergio Pininfarina’s first full commission, which he made known to Dave Cummins at Meadow Brook in 1989. 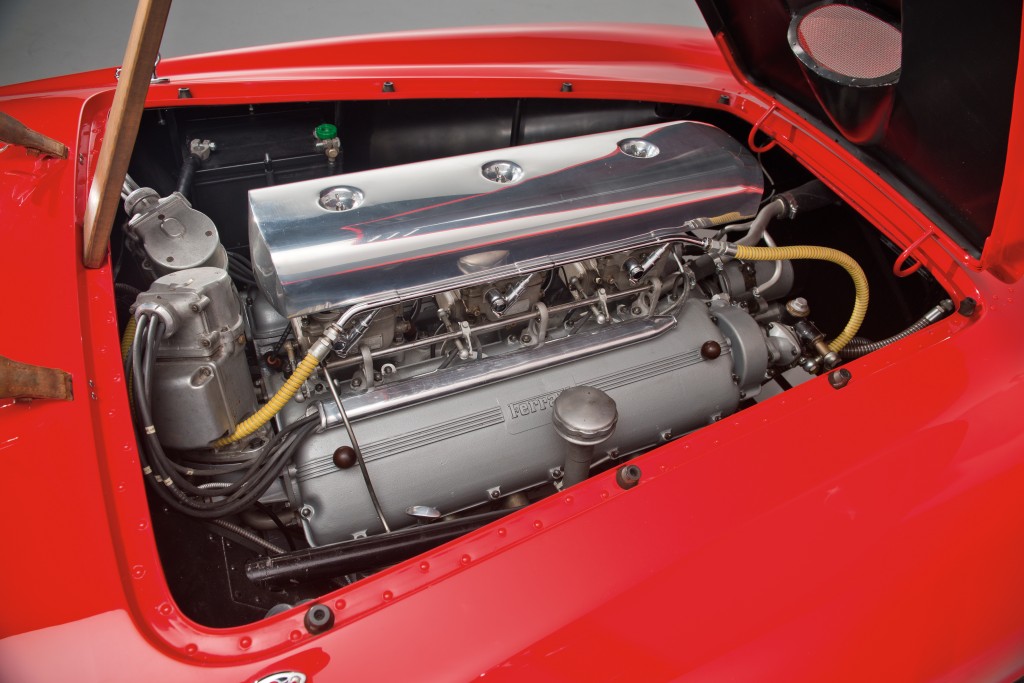 Chassis 0364AM was the eighth of twenty-six 375 MM examples that were eventually constructed, and it completed frame assembly at the Maranello factory on September 21, 1953. Four days later, it entered Pinin Farina’s plant to receive its innovative bodywork. In addition to the important fender design, the body featured such performance cues as a large hood scoop to improve air flow to the prodigious F1-derived Lampredi V-12, a single windscreen, and a rear-centered external fuel filler for optimal weight balance. The car’s paint is a shade of red that was mixed by General Motors’ color lab and dubbed Kimberly Red, after Kimberly called his old friend Harley Earl at GM and asked him for help in designing his own special color. 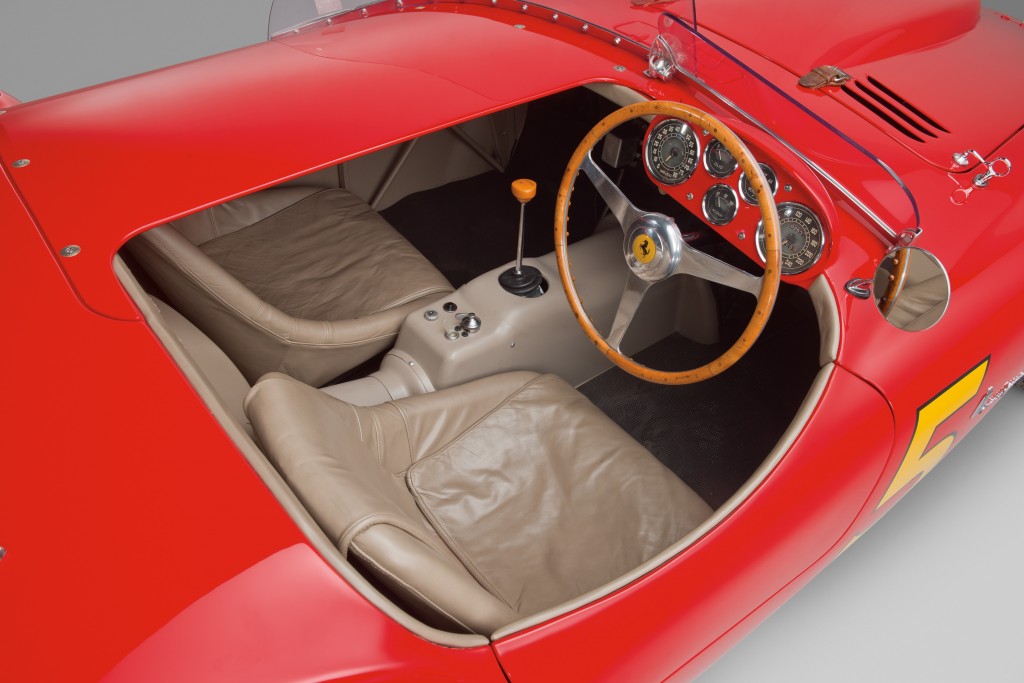 Taking delivery of the rousing 375 MM, Kimberly, who had visited the factory repeatedly to monitor the progress of the car, decorated the car with #5 and proceeded to do nothing less than dominate class C Modified competition during the forthcoming season. Before he could even begin, however, SCCA scrutineers did not take kindly to his unusual, new Ferrari, as they were unsure if it assisted with brake cooling or if it actually improved turbulence in the wheel wells. Evidently, it wasn’t until fellow privateer racer John Fitch put in a word that the matter was dropped, so long as a three-inch tab was inserted in the wheel well. 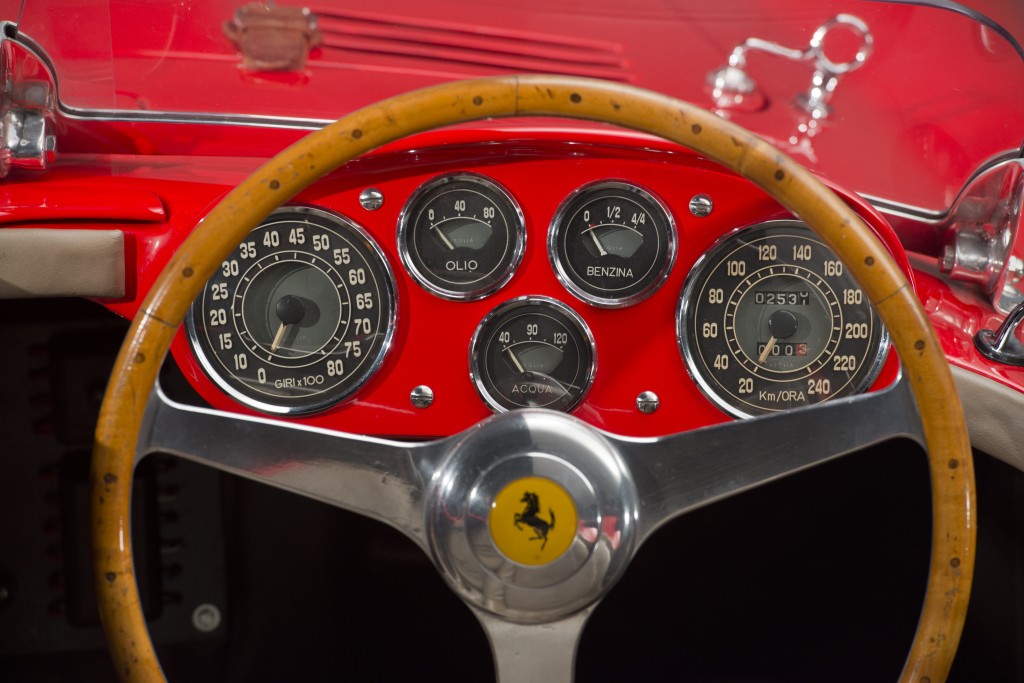 According to SCCA results, and the recollection of Kimberly himself, 0364AM was entered in 20 races during the 1954 season, resulting in 16 overall wins and 17 class wins (see adjoining table). Taking advantage of the lightweight spider’s legendary acceleration and handling on tight, short courses (for which it was the factory’s competition choice of the period), the 375 won a majority of the SCCA races held at U.S. Air Force bases, starting with the Festival of States Trophy on January 31 at MacDill Air Force Base (AFB) in Tampa, Florida, where it also claimed the Governor Dan McCarty Memorial Trophy with a 1st place finish. Four successive 1st overall finishes followed at Hunter AFB, Bergstrom AFB, and Andrews AFB. 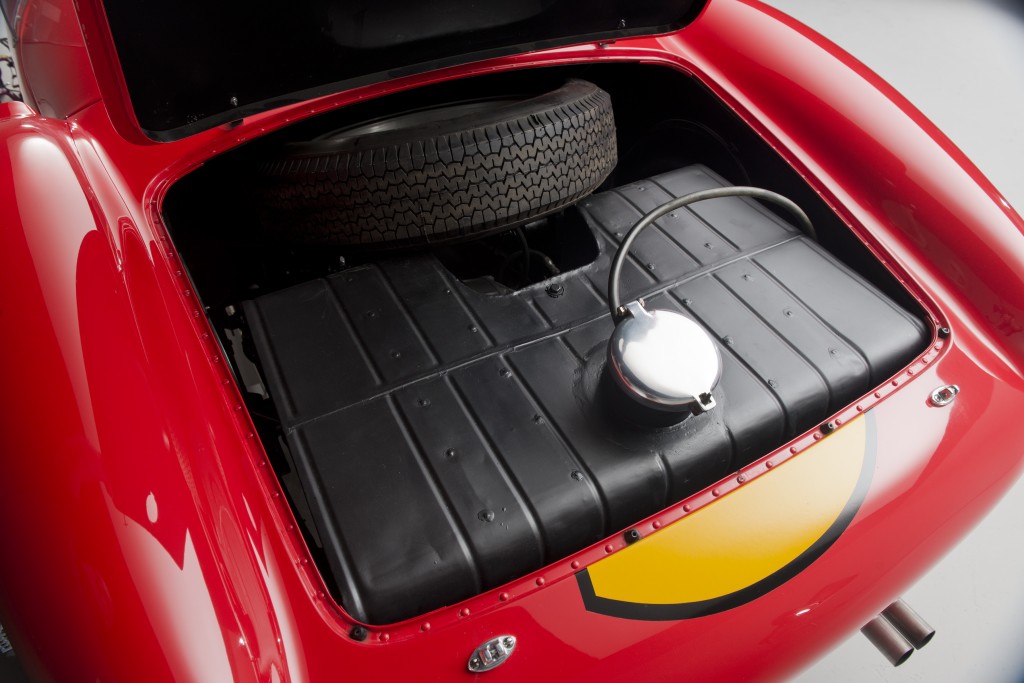 On May 2, the car experienced its first and only DNF of the year at the President’s Cup at Andrews’ AFB; Kimberly was leading in the last lap, and then he lost a connecting rod. A seemingly unstoppable run of 1st place finishes rounded out the year’s calendar, including a win at Wilmot Hills, Wisconsin, on August 1, and a 1st in class and 2nd overall at the International Sports Cars Grand Prix at Watkins Glen on September 18. 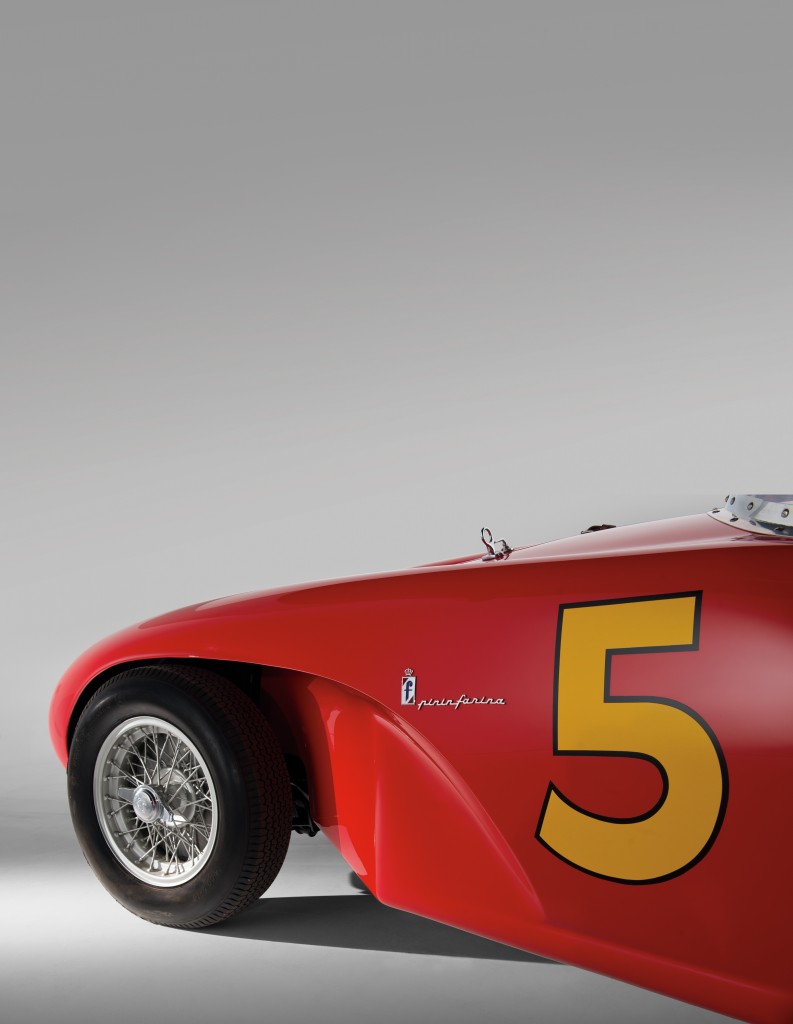 Finishing the season with two more 1st overall finishes at Akron Airport in Ohio during October, the car experienced its first non-podium finish at its final race of 1954, an atypical 6th place at March AFB in California on November 7 (Kimberly was slowed down by a hay bale late in the first lap and, although he recovered enough to finish the race, he did not take the checkered flag). At the end of the ’54 season, his commanding points-total resulted in being crowned the SCCA’s 1954 Class C Modified National Champion and the winner of the Most Improved Driver Award, which has since been renamed the Kimberly Cup in his honor. In fact, he had earned 9,500 points, 5,500 more than his rival Bill Spear.

Kimberly clearly intended to campaign the successful Ferrari during the 1955 season, and he dutifully trucked the car to Sebring early that year. Unfortunately, fate intervened with an accident during transit that resulted in damage to the body. An IndyCar builder was retained to repair the coachwork, and in the process, the original cutaways of the rear fenders were eliminated and replaced with standard ones. Kimberly entered the still unpainted car at Beverly, Massachusetts, on July 4, 1955, with bare aluminum coachwork, finishing 1st in class (2nd overall), but the magic was gone. He decided to participate in one final race with 0364AM, at Elkhart Lake’s Road America, on September 11, 1955, where he finished in an ignominious 7th place. At that point, Kimberly was already contemplating his next racing Ferrari, and the 375 MM would not remain in his stable for much longer.

In late 1955, Kimberly sold 0364AM to its second owner of record, Richard Lyeth, of Detroit, Michigan (owner of Lyeth Engineering), who clearly had a more characteristically American slant on the car’s competition potential. Intending to campaign the car in high-torque sprint races, Mr. Lyeth eventually removed the original Lampredi V-12, which, at the time, was a remarkably difficult motor for a stateside enthusiast to repair without readily accessible spare parts, and replaced it with a supercharged Corvette 283 cid engine, with the assistance of an engineer from GM. Further modifications included the addition of a Quick Change rear differential and a headrest mounted into a new rear fin on the bodywork, in the style of Jaguar’s concurrent Le Mans-winning D-Type. Interestingly, the Lyeth Hi-Tork differential was advertised in Hot Rod Magazine, as Lyeth was trying to market the technology to rod owners.

As an aside, 0364AM’s original V-12 was sold by Lyeth to a Ferrari enthusiast and hydroplane racer in Houston, who fitted it to one of his boats with the intention of racing. After colliding with a log during an initial practice run in a shipping lane, the boat unfortunately sank, and the Ferrari engine is believed to remain at the bottom of Galveston Bay.

Renaming the 375 MM the Hi-Tork Special Number 1, and decorating it with #91, Mr. Lyeth entered 0364AM in events that ranged from Road America to Watkins Glen, even winning the LASC Green Acres on July 5, 1958, and the modified class at Harewood Acres two weeks later. On May 14, 1960, the car achieved its final competition measure of note, taking 2nd place at the LASC Green Acres in its last known racing performance.